In August, I visited the farm of Jen and Derek Campbell in Wilmot Valley, just outside Summerside, Prince Edward Island.  I delayed posting this story until now because I wanted to publish it during National Organic Week in Canada which runs from September 21-28, 2013.

The Campbells are organic farmers and grow the most amazing variety of vegetables I have ever seen….some I have never heard tell of, like this alien-looking vegetable called kohlirabi, for example.

If you want to meet someone totally passionate about her work, then Jen is the gal to talk with.  Jen manages the day-to-day operations of the farm while husband, Derek, works in nearby Summerside, returning home to work on the farm evenings and weekends.  With twin four-year old boys, this is a busy household. 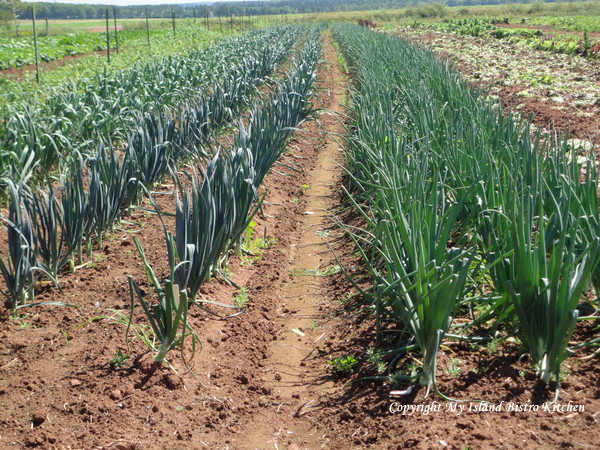 Jen grew up on a potato farm so is no stranger to farming.  She attended a natural resource school, Sir Sandford Fleming College, in Ontario graduating with a diploma as an Eco-system Management Technician.  After graduation, Jen lived and apprenticed on an organic farm for nine months.  A woman ran the farm so Jen was inspired that she, too, could be a farmer.  But, she didn’t start farming right away after graduation.  Jen returned home to PEI and began working at the Agricultural Research Station in Charlottetown, then at ADL Dairy for four years.  But the yearn for the land was great and the couple settled in Brookvale, PEI, where they began their organic farming.  They stayed in Brookvale for five years where they were certified organic farmers then, in 2011, moved to Wilmot Valley to be closer to family.  This marks the second year they have been farming in this location and they have one more year before they qualify as certified organic farmers in their Wilmot Valley location.  This is because certification requires the land to be three years free from the last prohibited substance in order to be considered fully organic.  They are, however, certified to grow organic transplants while the rest of the farm is in transition for one more year.  Being in transition means that, while they manage their farm organically and keep all the proper records, they have to wait until early summer 2014 to say their produce is “certified organic”.

Today, the Campbells have approximately 3 – 3½ acres of land in cultivation and have between 2½ – 3 acres which are actually farmed with over 40 different vegetables.  They are under the control of Atlantic Certified Organic (ACO), Atlantic Canada’s accredited certification body, and must maintain comprehensive records of their farming operation, buffer zones between their farm and others which are not organic, and ingredient content of compost and fertilizer used. In addition, they must test their water regularly and submit to monitoring by ACO as well as a third party inspection to ensure they are following the organic standards.

The Campbells grow the usual types of vegetables like tomatoes, beans, lettuce, onions, broccoli, and so forth but they also grow some vegetables that people might not associate with being grown on PEI.  For example, they grow tasty kohlrabi, collard greens, round lemon cucumbers that look like yellow transparent apples, Pattypan squash, and a multitude of herbs.

This is the first time I have seen these apple-shaped cucumbers.  In appearance, they resemble a yellow transparent apple but, in flavour, there is no mistaking they are cukes!

I wish my basil plants looked as healthy as these!

The day before I arrived for my early August visit, the Campbells had just harvested their garlic crop.

Jen says her produce is available at the Village Store in Lower Bedeque.  But, her biggest market comes from the Community Shared Agriculture Boxes (CSA Boxes). This process involves individuals (known as CSA members and sometimes referred to as shareholders) buying shares in her farm – i.e., at the beginning of the season, they sign a contract with the Campbells.  In return, the Campbells contract with their CSA members to do the best job they can to provide them with high-quality vegetables.  The CSA members either buy their shares upfront for the anticipated harvest or they contract to pay in installments over the season.  As a benefit and return on their investment, once harvest season begins, CSA members get a regular share of the vegetables from the farm as they are available. The risk, of course, that the CSA members accept is that weather and/or pests can play havoc with crops so, sometimes, yields might be lower or some crops might not be available at all that season if a crop failure happens.

Jen has two sizes of boxes available for her shareholders – those who buy large shares get a box of 12 different vegetables worth between $28-$30.  The smaller boxes have fewer vegetables and their shares are valued at $18.  The most popular size is the large share box because it is the better deal for people who eat lots of vegetables and CSA members with large share boxes also have unlimited swaps and grabs from the grab boxes.

While the boxes will come with vegetables pre-selected by Jen and will obviously vary according to what is in season, CSA members can swap out some vegetables, that they either don’t like or need, for something else from, what Jen refers to as, the grab boxes of other vegetables and herbs available.

Currently, there are 88 families and restaurants on the Island who have bought in to Jen’s CSA boxes which are available from June until October.  Of those, 84 are weekly recipients while 4 have opted to receive boxes every two weeks.  When she first began CSA boxes in 2008, Jen had 15 CSA members.  Today, with her 88 CSA members, she has a waiting list of others wanting to join.  Jen tells me she has very loyal CSA members with a 98% return of the same folks year-over-year.

Knowing that weeds, pests, and plant diseases are common to farmers, I asked Jen how, as an organic farmer, she combats them.  They obviously don’t use herbicides and Jen tells me control is through cultivation and weeding.  Last year, the couple purchased a vintage 1951 Alice Chalmers tractor which they converted to be electric.  They use this cultivating tractor to weed many of their vegetables such as carrots, beans, spinach, lettuce, etc., and they also use an ECO weeder for cultivating their broccoli and cabbage crops.  However, much weed control is still done the traditional, old-fashioned, painstaking way of hand weeding and by some flame weeding.

I asked Jen what the greatest source of her satisfaction is as an organic farmer and what keeps her farming organically.  She tells me she loves to work outside on the land but her greatest satisfaction comes from the feedback she receives from her CSA members who are very supportive and appreciative of her products.  She enjoys educating her CSA members on different vegetables, and how to prepare them, and encouraging people to step outside their comfort zones and try new veggies.   I can attest to this as I stopped by one of her Charlottetown drop-off locations and it was like a cross between Christmas and Old Home Week when her CSA members would come to pick up their CSA boxes of produce.

Greeted enthusiastically by Jen, there was lots of “oohing and ahhing” as the CSA boxes were opened by Jen for each person. 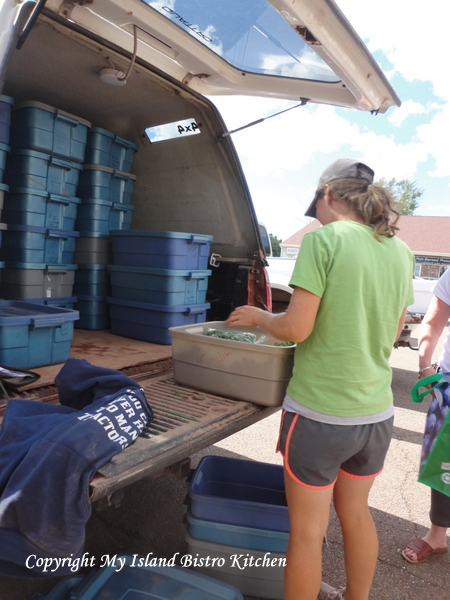 This is definitely personalized service and attention to CSA shareholders! 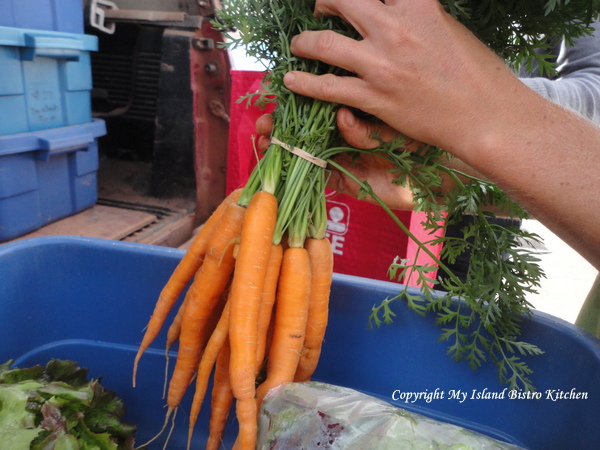 Jen tells me she sees her CSA members more as friends than customers or shareholders.  She sees most of them every week and, from the chit-chat, they were like long-time friends who were having great discussions over how they were going to prepare and serve this week’s offerings from their CSA boxes!

This summer, the Campbells have been busy building their new washing and packing barn which Jen, jokingly refers to as her “Veggie Palace”.   In addition to improvements in her washing and packing processes, when complete, the new facility will have a large walk-in cooler in which to store the veggies.

Jen employs two part-time seasonal employees, one from May till mid-November and the other from the end of June to the first of September.  Harvesting is done four days a week, Monday to Thursday, and Jen has two output distribution days –  i.e., she has two drop-off areas in Charlottetown each Tuesday and one in Summerside on Thursdays.  CSA members show up at one of these drop-off/pick-up locations with their recyclable grocery bags, baskets, or coolers to claim their share of fresh, organic vegetables from the Campbell farm.  PEI produce at its best!

Jen regularly blogs about what produce is available by the week on the farm and you can read her blog here:   http://farmfreshveggies.blogspot.ca/

There is nothing better than farm-fresh produce just picked from the field.  I arrived home from my visit to the Campbell farm with a supply of two kinds of beets, tri-colored carrots, kohlrabi, Pattypan squash, and collard greens. 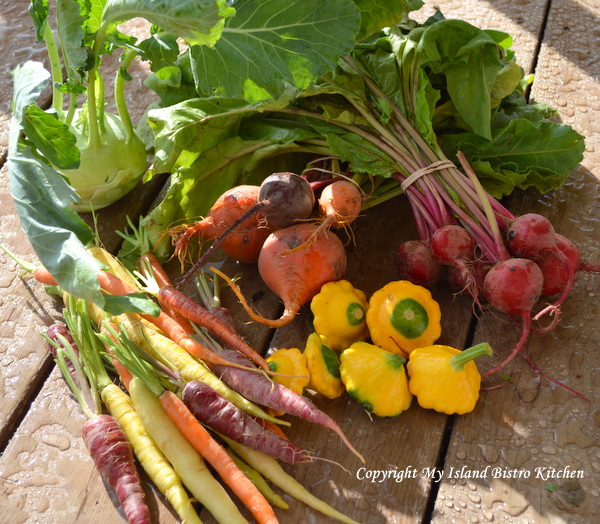 One of my favorite ways to serve vegetables is to roast them.  I used kohlrabi, pattypan squash, beets, carrots, and red onion in a roasted veggie medley for which the recipe follows.

Peel and chop the vegetables into chunks of similar size. 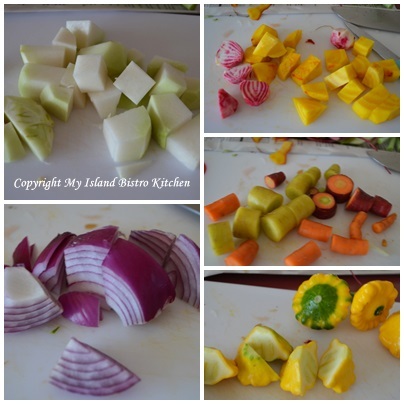 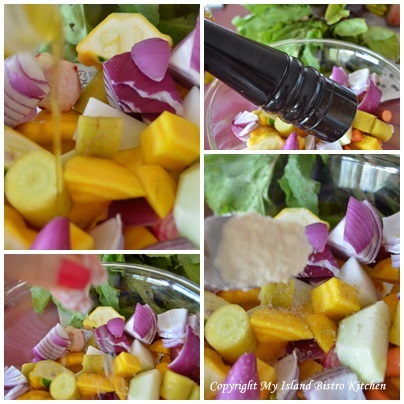 Transfer the vegetables, single-layer, to a parchment or tin-foil lined rimmed baking sheet. 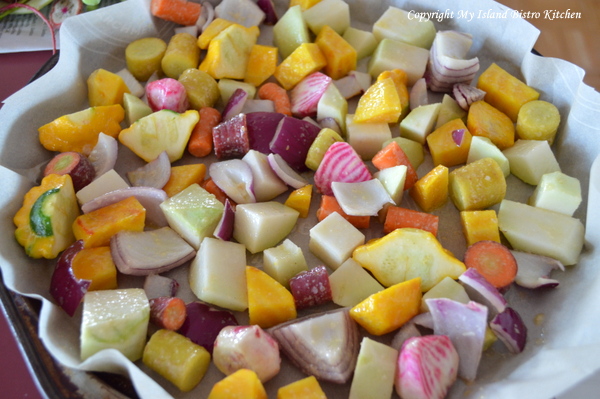 Roast for about 40 minutes or so, just until the veggies are fork-tender.  Serve hot.

My thanks to Jen Campbell for taking time out of her busy farming season to show me around her organic farm and explain its operation to me.

How are you celebrating National Organic Week this year?

To raise awareness and show appreciation and support for local organic farmers who grow great food for us, please share this story on your social media sites.