Prince Edward Island is well known for its seafood and potatoes, both of which are major industries on the Island.  However, what many of you may not know is that there is an emerging industry on the Island that involves beverage making.  Blueberry juice, apple cider, cranberry juice, wine-making, spirit distilling, and beer-brewing are all happening on PEI. 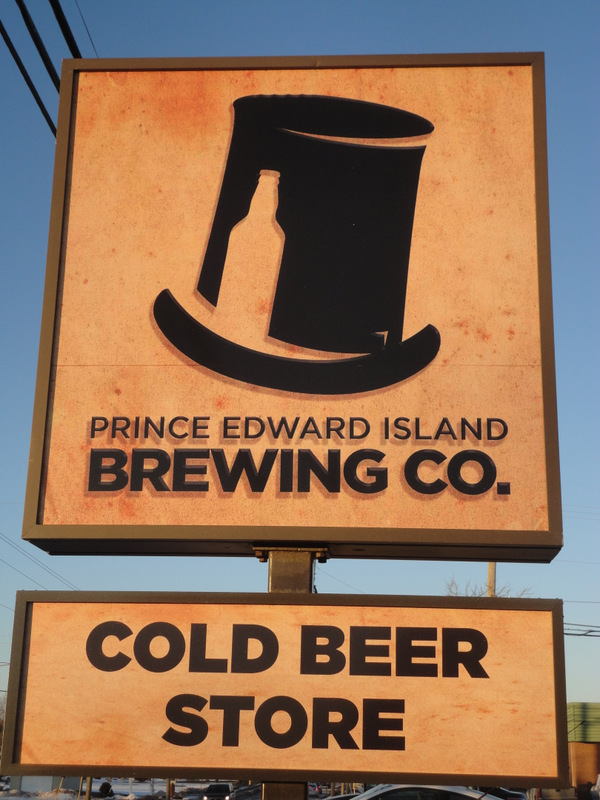 Today, I am taking you with me on a visit to the Prince Edward Island Brewing Co. in Charlottetown where the local artisan brewery, now set up in its spacious new state-of-the-art facility on Kensington Road, brews award-winning ales and lager.  After we tour the Brewery, we’ll head downtown to the Gahan House Restaurant to talk with the chef about beer pairing and find out how he uses beer in making a traditional Maritime dish – Fish Cakes – and, yes, he shares his recipe 🙂

My guide at the Brewery today is Al Douglas, Director of Branding and Community Engagement.  We begin our chat in the modern and spacious lobby of the brewery.

The brewery had its beginnings 13 years ago when owner, Kevin Murphy, operated it under the name of Murphy’s Brewing Co. in a restaurant (Lone Star Café) he owned in Charlottetown.  The brewery then moved its operations to the Gahan House Restaurant in Olde Charlottetown and, when it outgrew its space there, moved to a location on Walker Drive.  After two years in that location, it became apparent that the demand for the product was increasing as they were running out of beer mid-season.  So, in 2013, to increase their brewing capacity, the brewery moved to their current newly-refurbished building at 96 Kensington Road. 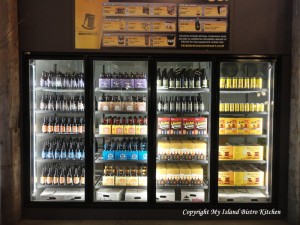 Prince Edward Island Brewing Co. brews both ales and lagers the old-fashioned way with no preservatives, additives,or pasteurization.  The brewery currently brews eight ales and one lager which is aptly named “Beach Chair Lager”.  The Beach Chair Lager has the distinction of being the first-ever canned craft beer produced in Atlantic Canada.  Al says their most popular products are the Beach Chair Lager and Sir John A’s Honey Wheat Ale.  They do brew some seasonal specialties like a pumpkin ale in the fall and Dunkel, a vanilla and bourbon oak-infused dark lager over the Christmas and winter period. 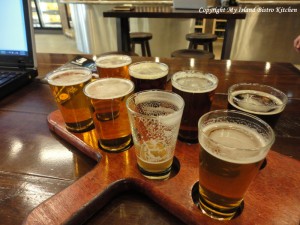 I asked Al what sets their beers apart from others on the market.  He tells me that it is a locally-brewed product that uses no preservatives or additives.  Additionally, the naturally clean and clear PEI water is easier to filter.  Consumers today are conscious of where the products they consume come from and there is support for products that are produced locally, like the brewery’s ales and lagers.

The beer is available onsite at the brewery and is also sold in all liquor stores on PEI and in many restaurants, cafés, and bars around the Island.  If you are off-Island, look for the beers in select locations in Nova Scotia, New Brunswick, Newfoundland and Labrador, Alberta, and British Columbia and, come spring 2014, in Ontario.

What makes the current location of the brewery unique is that it has a huge area where they can host large events like weddings and concerts.  Check out the chandelier and the contemporary white chairs in the photo below. 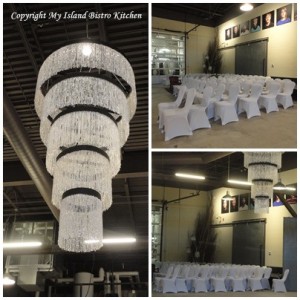 Event capacity is up to 500 persons and Al tells me they have held a number of events already, have more planned, and bookings are brisk for wedding receptions for the upcoming wedding season.  Two full-scale kitchens onsite, including a large brick oven, allow for food preparation for large numbers.

The brewery employs 16 full time employees over the winter and, in the summer, that staff complement increases to 25-30 that includes both full and part-time employees.  The brewery has two certified brew masters on staff.

Prince Edward Island Brewing Co. supports local producers, buying local ingredients where possible.  For example, the Sir John A. Honey Wheat Ale uses honey from Honey Dew Apiaries in Canoe Cove.  The blueberry beer uses a blueberry purée from PEI Berries Ltd. in East Montague.  This means the brewery has a year-round demand for these two ingredients since both beers are brewed all year.  This is good news for the support local movement.

So, what goes into beer making?  There are four basic ingredients:  water, grains (malt), hops, and yeast.  Extra flavorings such as blueberries or honey may also be added.  Each of the main ingredients contributes important properties to the beer.  The water carries the flavour, the malt adds sweetness, color, and flavour, the hops add flavour, aroma, and some bitterness to counter or balance the sweetness from the malt, and the yeast converts sugar extracted from the malt into alcohol and carbon dioxide gas that adds flavour.  Yeast is what causes the beer to ferment.

“Fresher is better.  Having a brewery in the community is where you’ll get the freshest beer.”

What’s next for the PEI Brewing Company?  This year marks the 150th anniversary of the Charlottetown Conference where the Fathers of Confederation first met to begin laying the framework for what would later become Canada.  In honor of this event, the brewery has brewed a Fathers 2014 Commemoration Pack of beer. 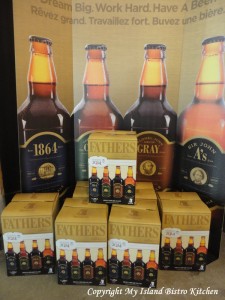 I asked Al if there was one product they brewed that surprised them in terms of its popularity.  He says the blueberry beer was initially developed to be a seasonal beer available in the spring/summer season but it became so popular that customers and restaurants were continuing to ask for it other times of the year that they now brew it year-round.

In addition to the retail store, a bar, and a cold beer store on the premises, 45-minute tours of the brewery are available for $10/pp (+HST).  This includes a sample of the hand-crafted beer in the tasting room as well as a tour through the facility, starting with the ingredients room where you can see samples of the ingredients and smell the hops. 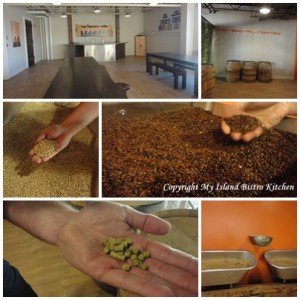 The tour takes you past the large brewing tanks. 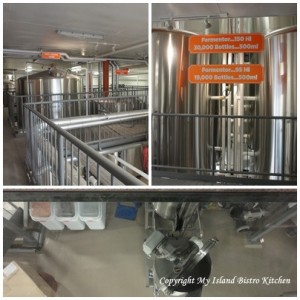 The tour concludes in the bottling center area which was really busy today. 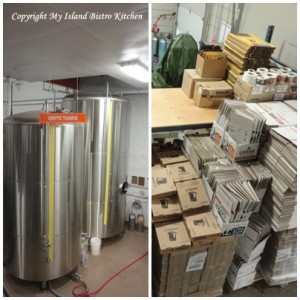 Lots of beer being bottled at the Brewery this afternoon!

The brewery was certainly a hive of activity today! 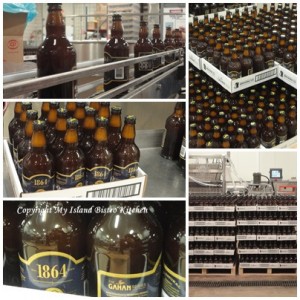 And, the end result – pallets of boxes filled with bottled artisan beer ready for shipping to customers.

For more information on the Prince Edward Island Brewing Co., visit their website.

Up until a few years ago, if you went into a restaurant and asked what the server recommended as a drink with a certain dish, you would most likely be provided with a wine suggestion.  Today, however, you might very well receive the suggestion of a beer pairing with your meal.  To find out what dish would go particularly well with the PEI Brewing Company’s beers, I went to the Gahan House in Olde Charlottetown where, incidentally, they still brew onsite all the beer served in their restaurant.

Chef Dwayne MacLeod of the Gahan House suggests a good Maritime dish to demonstrate how beer can be used as an ingredient and/or paired with food – Fish Cakes made with salt cod and haddock.  Chef MacLeod says the beer brings out the saltiness in the food and several of the Prince Edward Island Brewing Co. beers pair very well with fish cakes.  He also suggests, if beer is used as an ingredient in the dish, the same beer would pair very well as a beverage with the meal.  So, if you cook the potatoes for the fish cakes in beer, as Chef MacLeod suggests can be done, then the same beer would pair well as a beverage with the fish cakes.

Chef MacLeod has graciously shared his recipe for fish cakes.  He has two beer pairing suggestions to go with the fish cakes.  The first is the Gahan Iron Bridge Brown Ale (pictured in the photograph below).  He says this beer will introduce a nutty and caramel flavour to the meal.  His second suggestion is a wheat ale like the Gahan’s Sir John A’s Honey Wheat Ale.  It is a light beer and will not overpower the flavors of the fish but will add to the flavour of the salt cod.

(from the Gahan House Restaurant in Charlottetown, PEI)

Soak salt cod in water for 12 hours.  Drain and rinse cod and chop up finely in a blitz machine.

Cook potatoes.  If desired, cook the potatoes in beer and water (ratio is 2 parts water to 1 part beer).  Cool potatoes.

Mix haddock, salt cod, green onion, and garlic together.  Portion out 2 oz for each fish cake and form into a patty.

Heat oil or bacon fat in pan over medium to medium-high heat.

Place fish cakes in hot oil and cook until the edges start to turn golden brown.  Once golden brown, flip the cakes and cook the other side the same.

Serve with the cucumber sauce and enjoy.