Each year, in September, Prince Edward Island celebrates its many fine local foods through a month-long culinary festival known as the PEI Fall Flavours Festival. The festival brings the hottest names in Canadian gastronomy to be guest hosts at various gourmand events held in iconic Island locations.

The celebrity chefs participate in the menu design and meal preparation that feature several of PEI’s local foods that come from the Island’s red fertile soil and rich marine waters that continue to make PEI a world-renowned food destination.   Each September, more and more foodie tourists make PEI their vacation destination so they can explore and enjoy our food culture and see for themselves where our food comes from by visiting farming communities and fishing villages across our picturesque Island.

In early September 2017, Chefs Michael Smith (of Fireworks Restaurant in PEI) and Paul Rogalski (of Calgary’s Rouge Restaurant) teamed up to celebrate the authentic food culture and heritage of Georgetown, PEI, a small, rural town in the eastern part of the Island, about 40 minutes from the capital city of Charlottetown. In what I’d class as an intimate evening of dining in the town’s theatre, the King’s Playhouse, the culinary duo carefully planned a five-course dinner that showcased local chefs and restaurateurs and, of course, fine meat, seafood, and produce, local to the area. This was “A Taste of Georgetown”.

Upon arrival at the King’s Playhouse, patrons were offered a complimentary glass of Rossignol wine. Rossignol Winery is PEI’s oldest winery and is located in Little Sands, near Murray River.

And then…..the eating commenced with several appetizer stations both inside the theatre and in a tent adjacent to the Playhouse.

As patrons sipped on their beverage of choice and sampled the Snow Crab Roulade, they stopped to watch local artist, Margaret Wailes, create a painting of a local rural scene.  One lucky patron was the winner of the painting and went home with a lovely momento of the evening.

To the music of local musician, Taylor Johnson, folks made their way to the tent in the AA MacDonald Memorial Gardens just outside the King’s Playhouse.

Here, there were several activities underway that included demonstrations of lobster trap rigging and eel pot mending.  It was also fun to pick out a starfish collection to take home from Tranquility Cove Adventures.

Local guitarist and singer, Barry O’Brien, provided musical accompaniment while patrons checked out the shucking skills of Chef Michael Smith and Chef Paul Rogalski who were busy shucking “Brudenell Bully” oysters harvested from the waters in the Georgetown area.

The chefs kept their assistants on the hop making the tacos over an open fire and stuffing the mini tacos with the eel filling.

Those are some mighty big clams!

The MC for the dinner was Haley Zavo, Executive Director of the King’s Playhouse.

The five-course dinner was a plated meal served at attractively set tables.

To stimulate the appetite, Eden’s Gate Restaurant prepared the amuse-bouche of a seared scallop with lime aioli on micro greens.

This was followed by two starters, the first being a chunky home-made seafood chowder and biscuit from the Georgetown Historic Inn, just a stone’s throw from the Kings Playhouse.

The Georgetown Historic Inn and Eden’s Gate Restaurant teamed up to prepare the evening’s dessert finale – PEI blueberry cobbler served with vanilla ice cream and an apple rosette in a puff pastry drizzled with PEI Strait Rum and butter sauce.

Because this was a small dinner for about 80, it offered more direct interaction between patrons and both the celebrity chefs and local chefs who were involved with the meal preparation. Each of the participating chefs/restaurateurs was invited to explain the dish he or she was preparing and from where the ingredients were locally sourced.

There were lots of opportunities to pose questions of the guest chefs, both of whom were very obliging in their responses.  There was certainly no problem to see how passionate Chef Michael and Chef Paul are about their chosen vocation and of how important it is for them to source fresh, quality ingredients from local food producers, fishers, and farmers.

“Taste of Georgetown” was one of three new Fall Flavours Festival culinary events introduced in 2017 (the other two are Taste of Tyne Valley and Taste of North Rustico – Rustico Kitchen Party).  The intent is that the events draw people to smaller local communities across the Island where they can discover all that makes PEI unique – the food, producers, landscapes, and the local people, particularly those involved in the food and music scene.

Because these culinary events tend to draw people who are already passionate about food, the PEI Fall Flavours Festival events are prime opportunities for the many local food and beverage producers and chefs to showcase their products, culinary skills, talents, and passion for authentic regional food to foodies.  Of course, it’s also a great way to introduce visitors to PEI to the vast spectrum of food and beverages available on the Island. 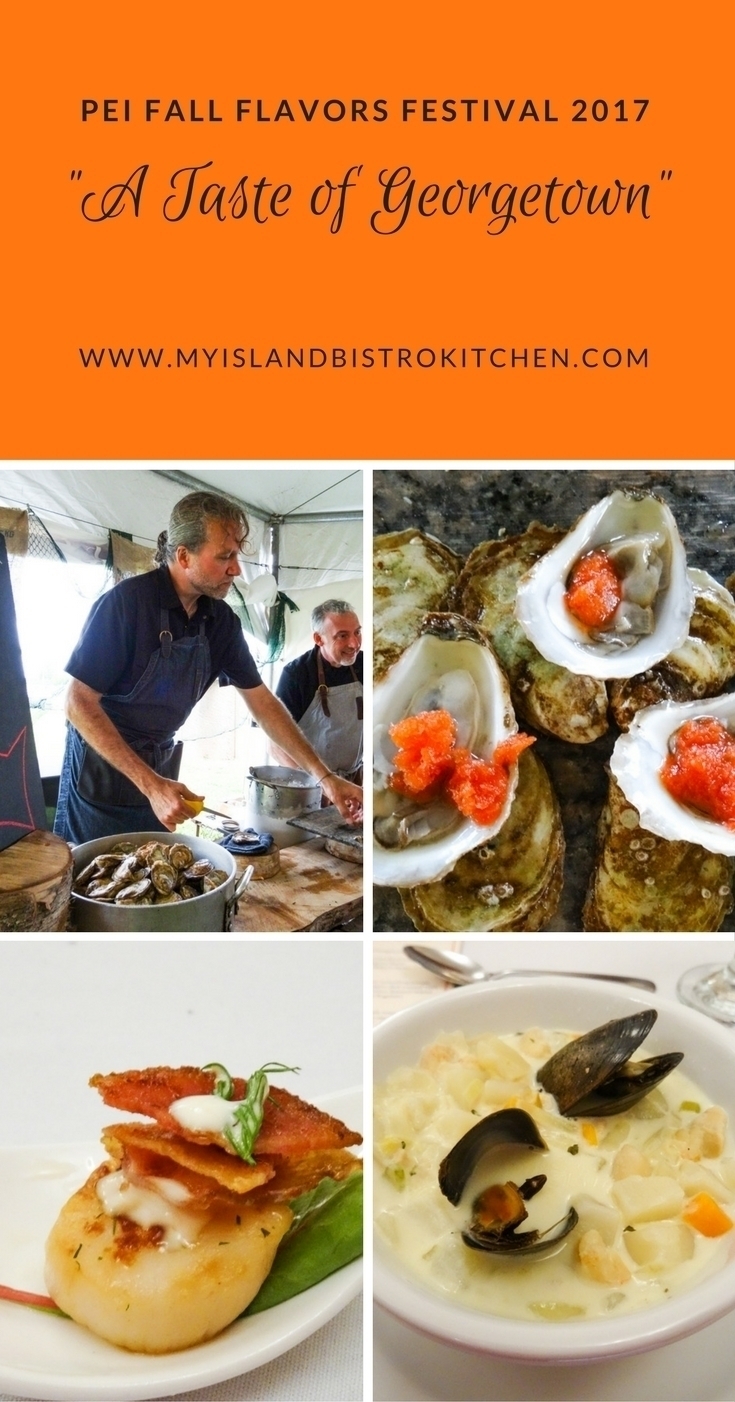