I thoroughly enjoy September on Prince Edward Island for many reasons but, topping the list, has to be the array of culinary events that form the Fall Flavours Festival, a month-long celebration of all things food on the Island.  If you are a regular follower of my blog, you will recall postings from 2012 and 2013 about previous Fall Flavours events I attended and one in August 2014 about the Fall Flavours Festival in general.   The 2014 Fall Flavours Festival kicked off on September 6, 2014, with an event to celebrate the creation of Canada. This signature event was held on the grounds of the Culinary Institute of Canada, in Charlottetown, PEI. 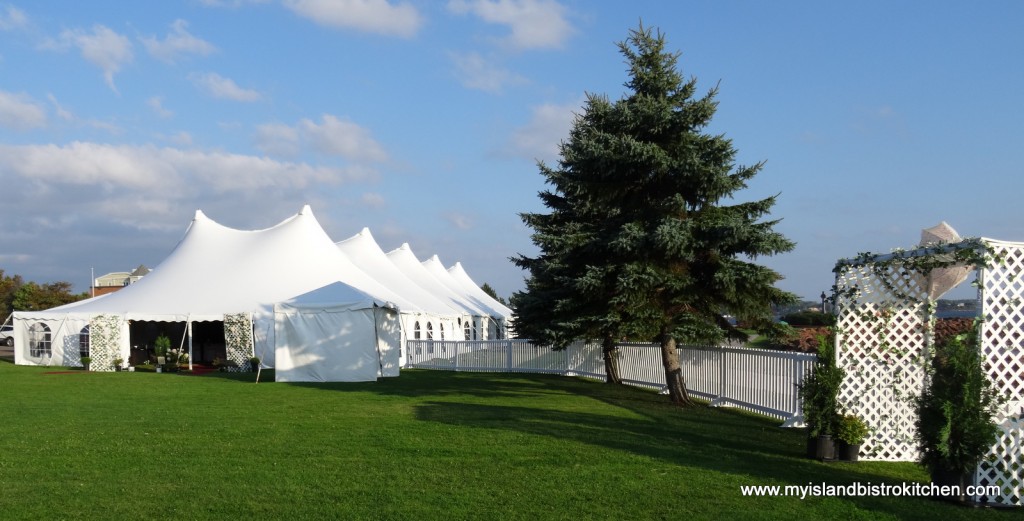 But, before I tell you about the evening, just a short lesson on Canadian history to help explain the significance of the grand Feast of the Fathers event.

This year (2014) marks the 150th anniversary of the 1864 Charlottetown Conference that set off a chain of events that eventually led to the forming of Canada.  Prince Edward Island, Nova Scotia, and New Brunswick delegates were meeting in Charlottetown in early September, 1864, to discuss the possibility of a Maritime Union.  When political leaders from what, today, are the provinces of Quebec and Ontario, heard of the meeting, they asked to attend.  One of the delegates was Sir John A. Macdonald who would later go on to become Canada’s first prime minister. The delegates journeyed down the St. Lawrence to Charlottetown and discussions began about a much larger union than that of the three Maritime Provinces.

The delegates arriving at the foot of Great George Street and making their way up to Province House weren’t, however, the only show in town.  A circus had rolled into Charlottetown and, as a result, there were few on hand at the dock to greet the now-famous Fathers of Confederation who would be instrumental in forming a nation.

The delegates met for several days and amidst formal meetings, elegant balls, and banquets, approval for Confederation was achieved with plans made for further conferences to be held in Quebec and London.  Eventually, on July 1, 1867, the Dominion of Canada was formed with the proclamation of the British North America Act.

Now, you might wonder what this brief Canadian history lesson has to do with a food blog.  Well, this summer, there have been a tremendous number of events on PEI to commemorate and celebrate the 150th anniversary of the first meeting of the Fathers of Confederation who worked to form the nation.  The Feast of the Fathers culinary event set out to recreate an evening and menu much like the Fathers of Confederation might have experienced during their stay on PEI in 1864.  And, this event did not disappoint.  It was beautifully and artfully executed in every way.

Guests to the Feast of the Fathers dinner were met by the Fathers and Mothers of Confederation who, in period costume, stroll the streets of Charlottetown in the summer months. 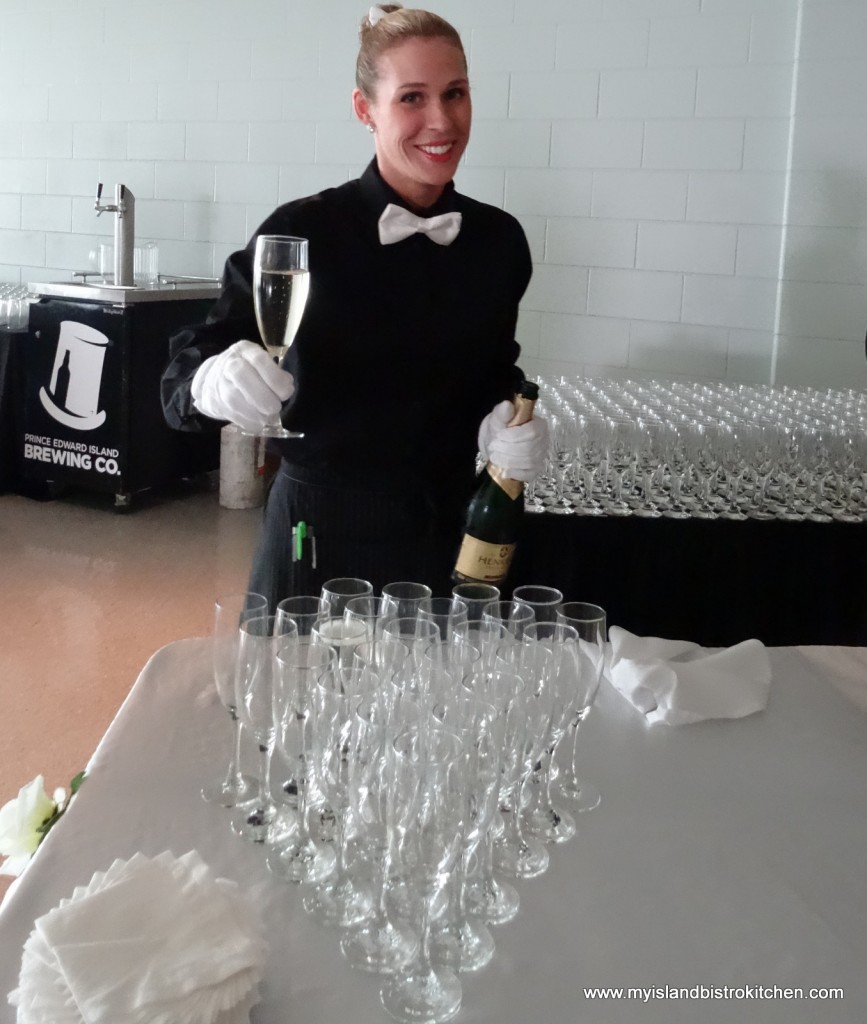 Guests were greeted with a glass of champagne and then they made their way to one of two oyster bars. 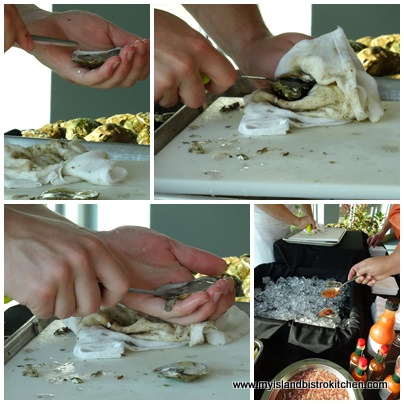 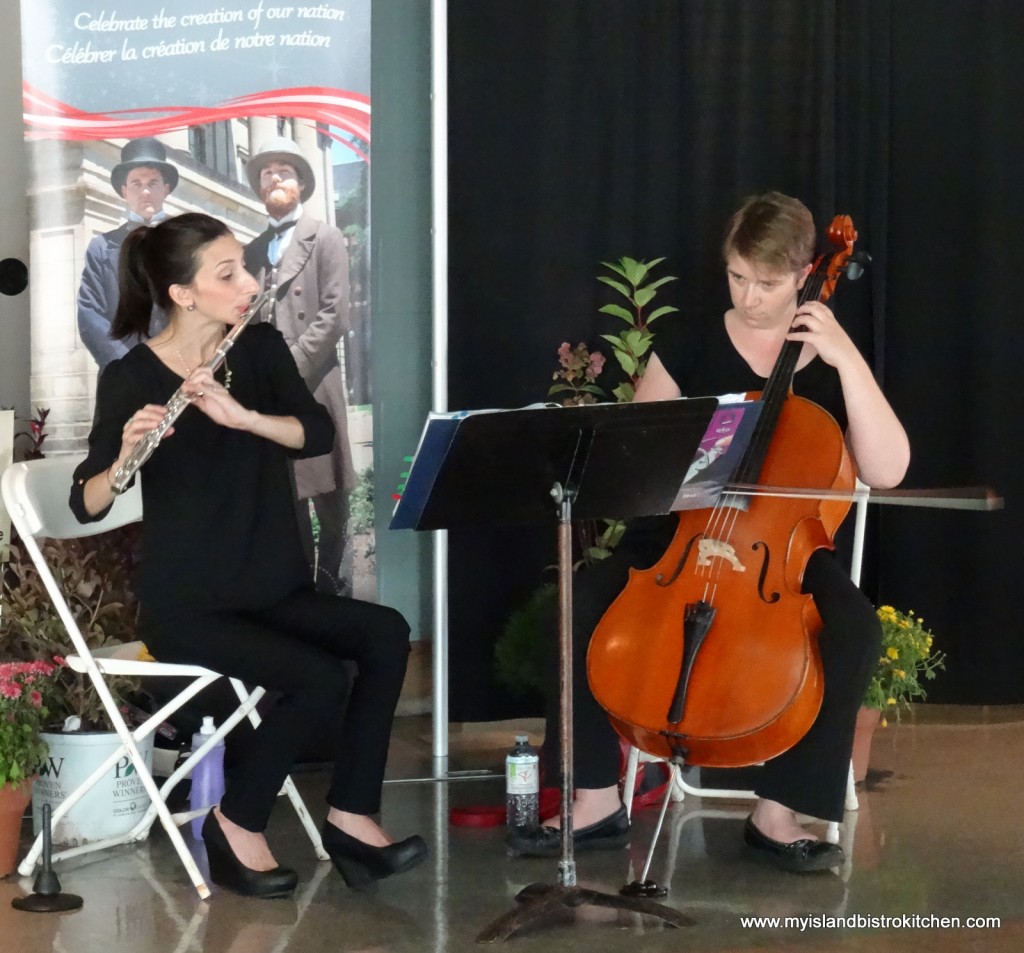 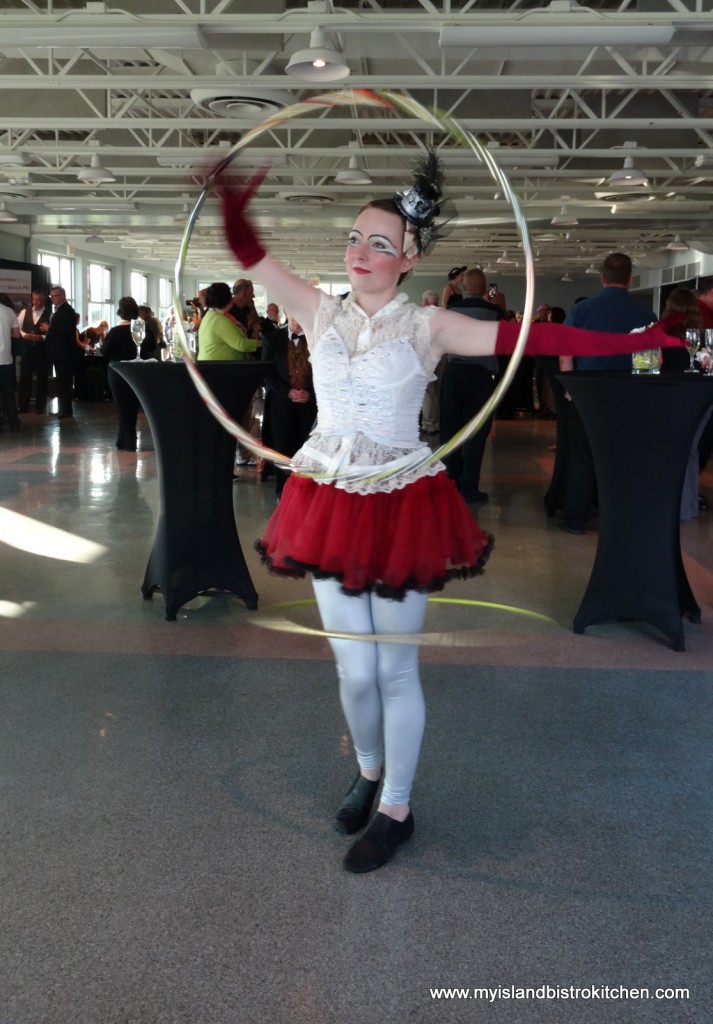 This gal could really navigate on stilts! 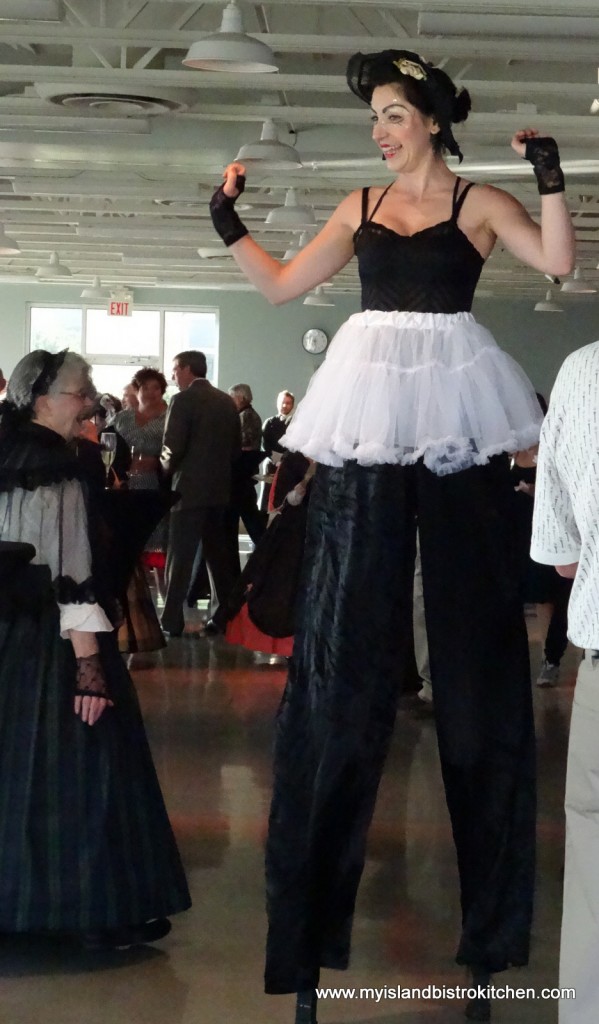 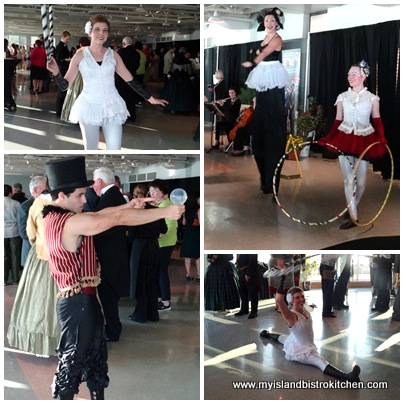 Waiters circulated with trays of tasty hors d’oeuvres – a bacon-wrapped scallop, anyone? 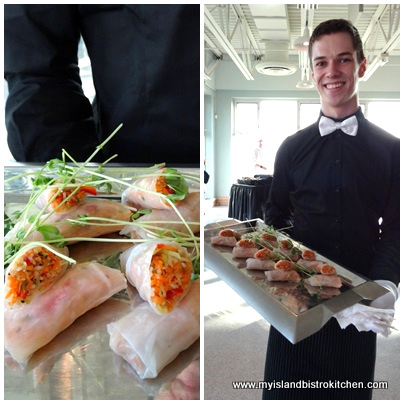 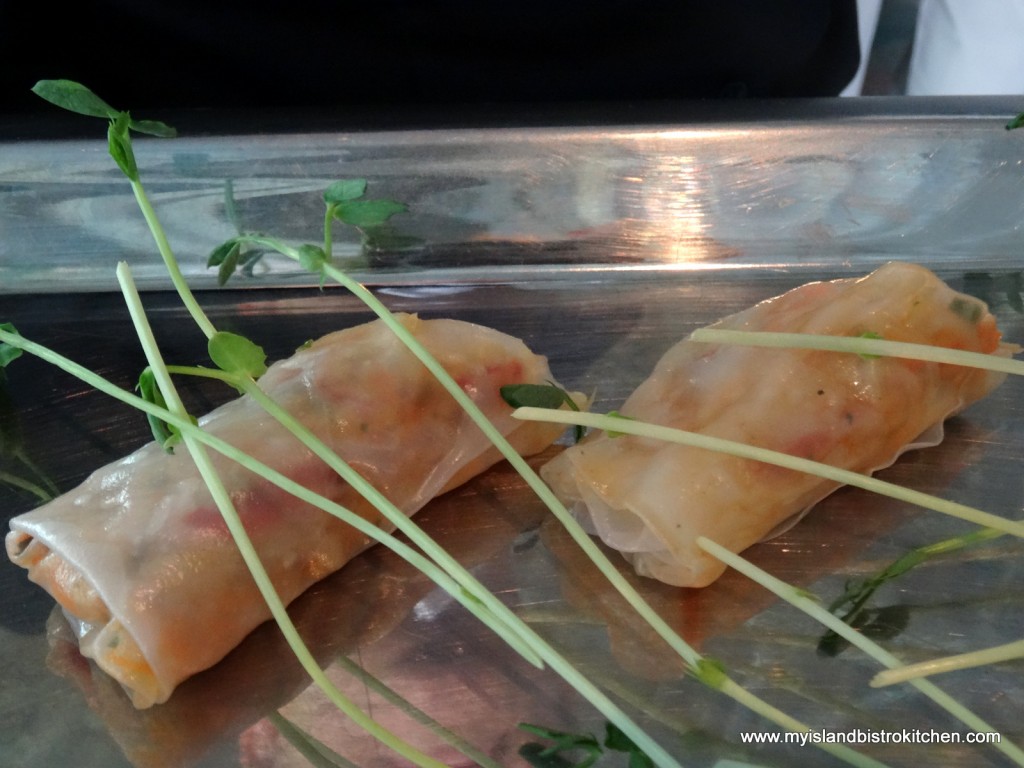 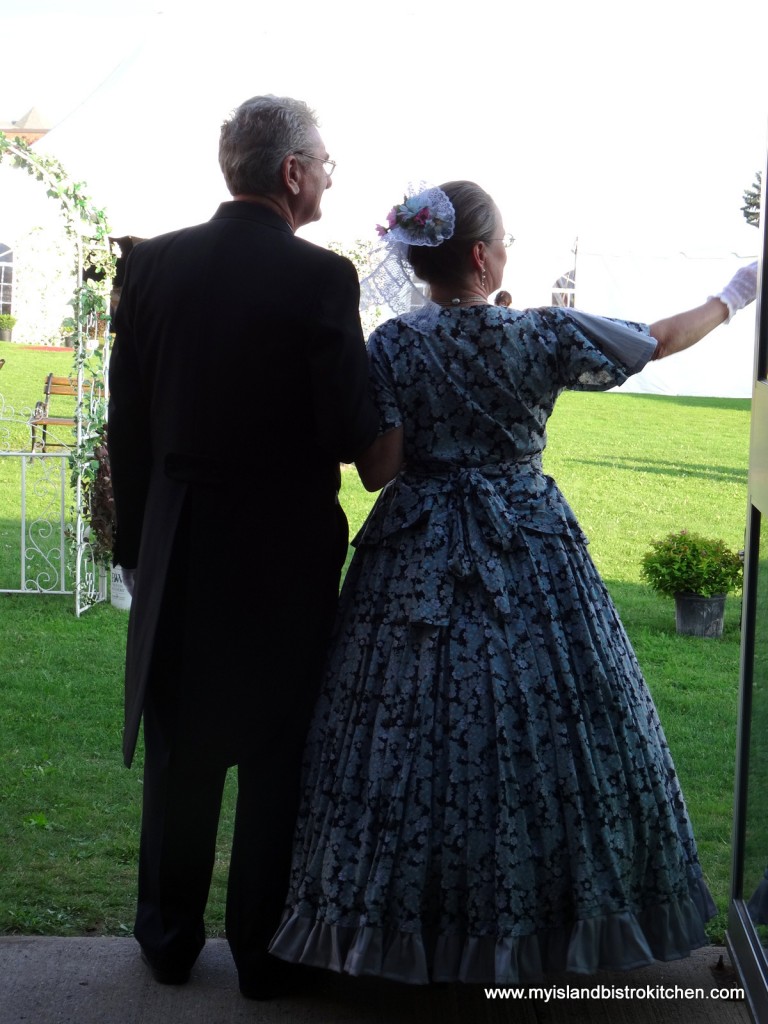 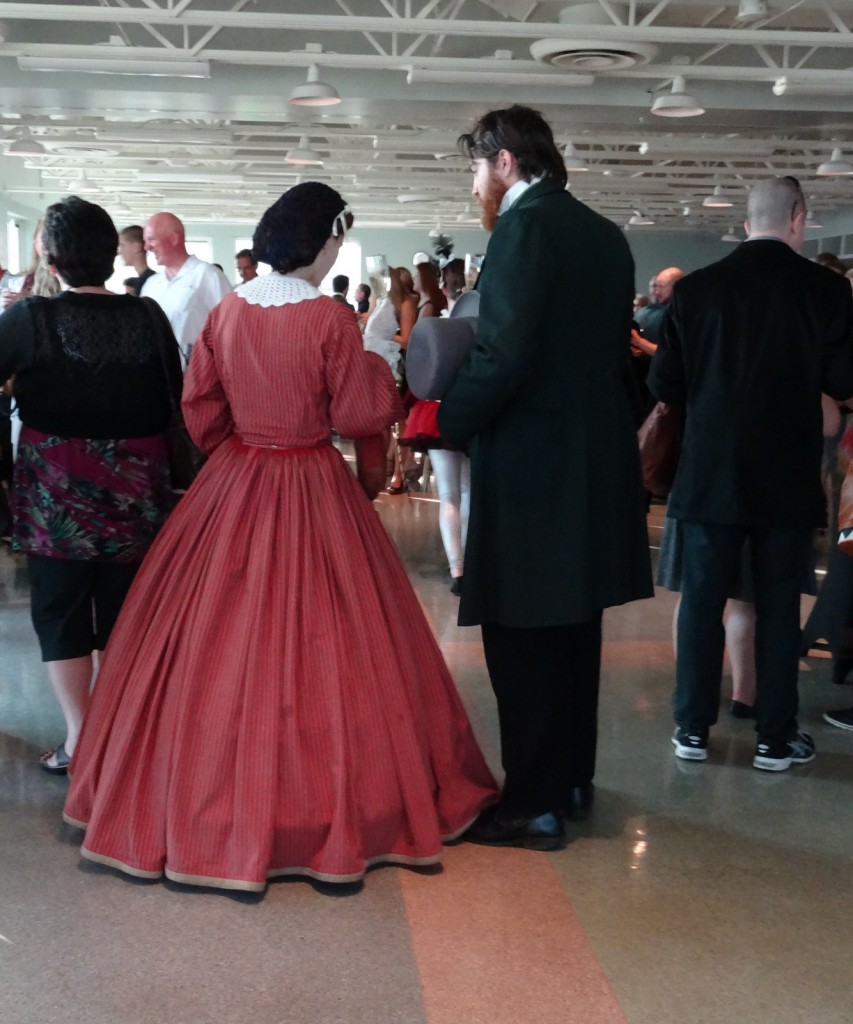 Dinner was to be served in a huge tent on the Culinary Institute grounds. 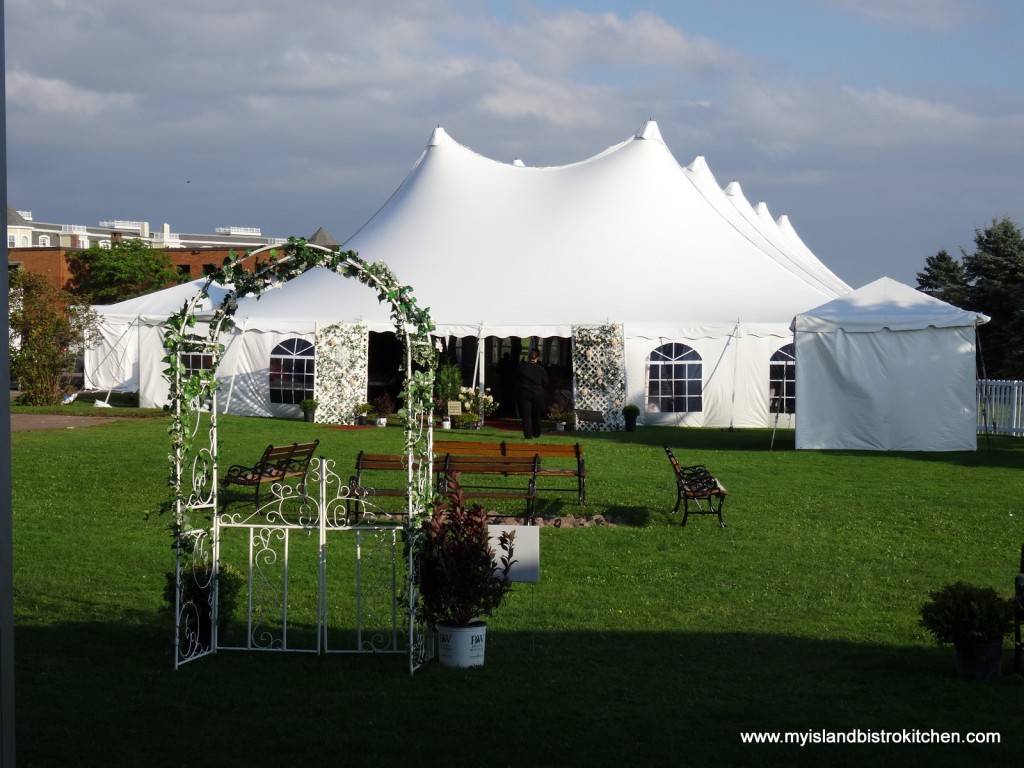 I made my way into the tent before guests arrived so I could photograph the beautifully set tables. 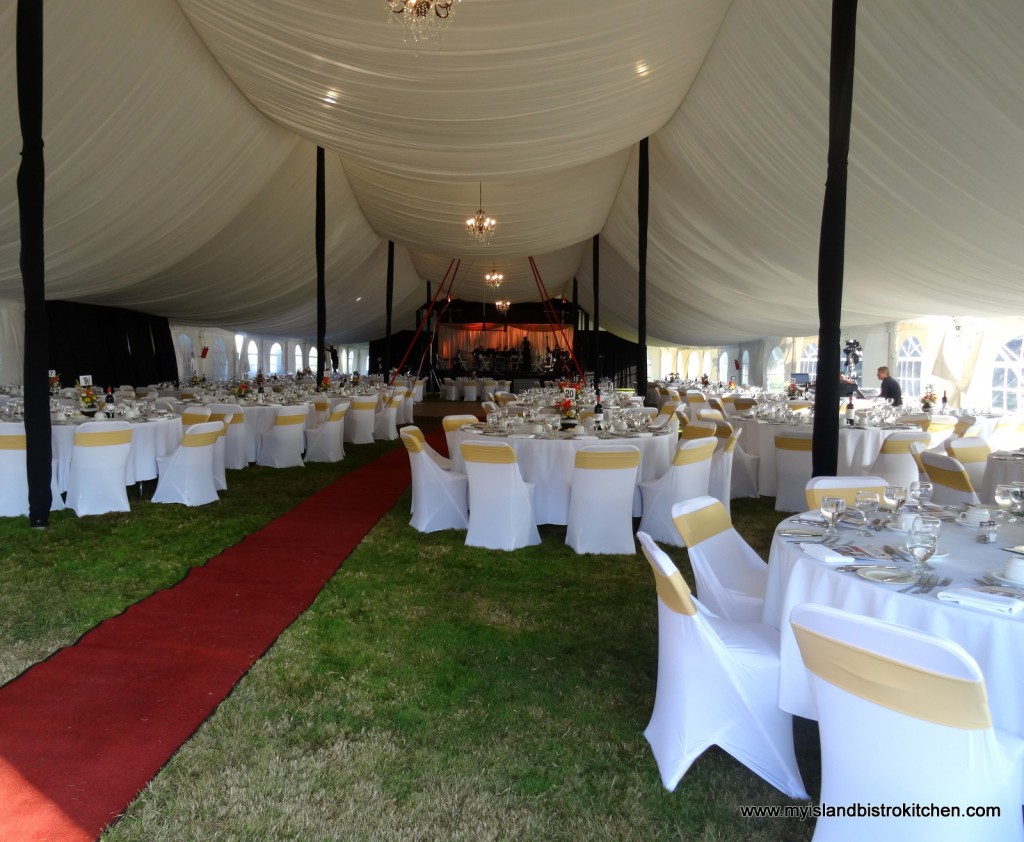 The color theme was white and gold.  Well-set tables always take my eye. 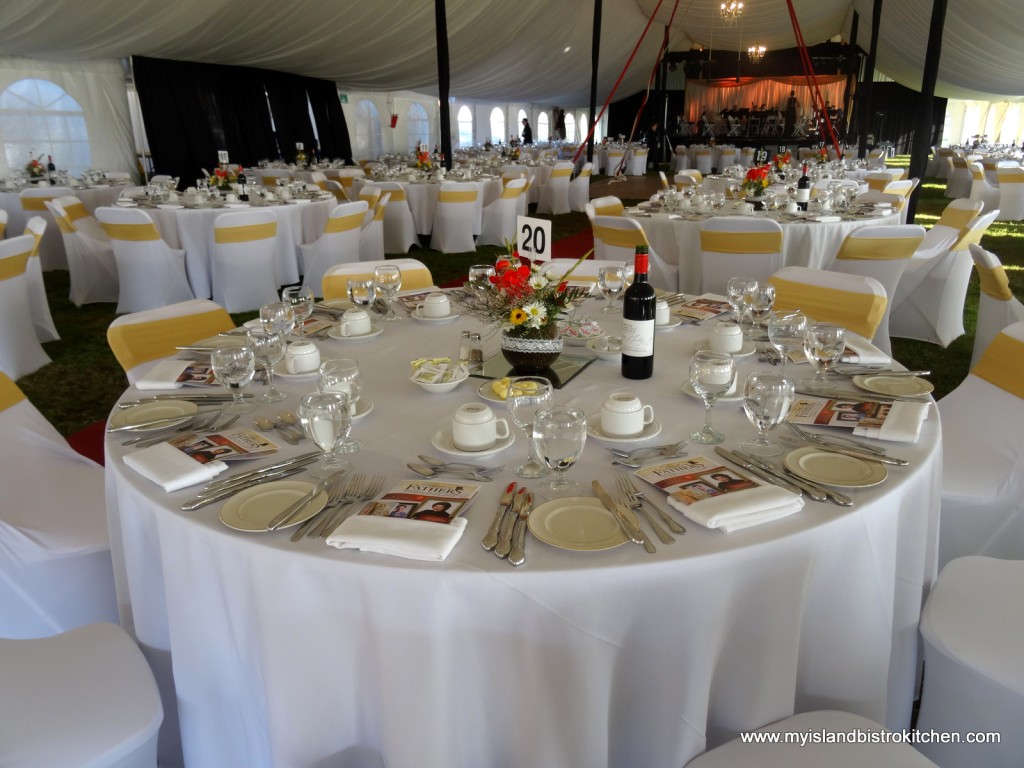 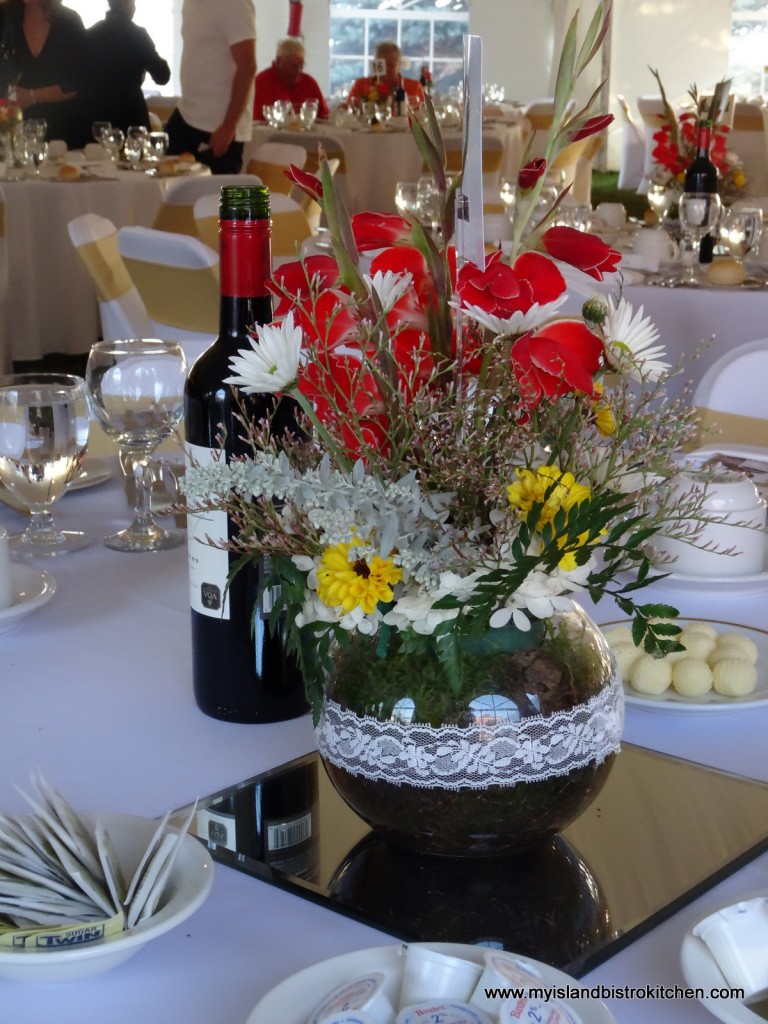 Each place setting had the evening’s program and menu tucked inside the napkin fold. 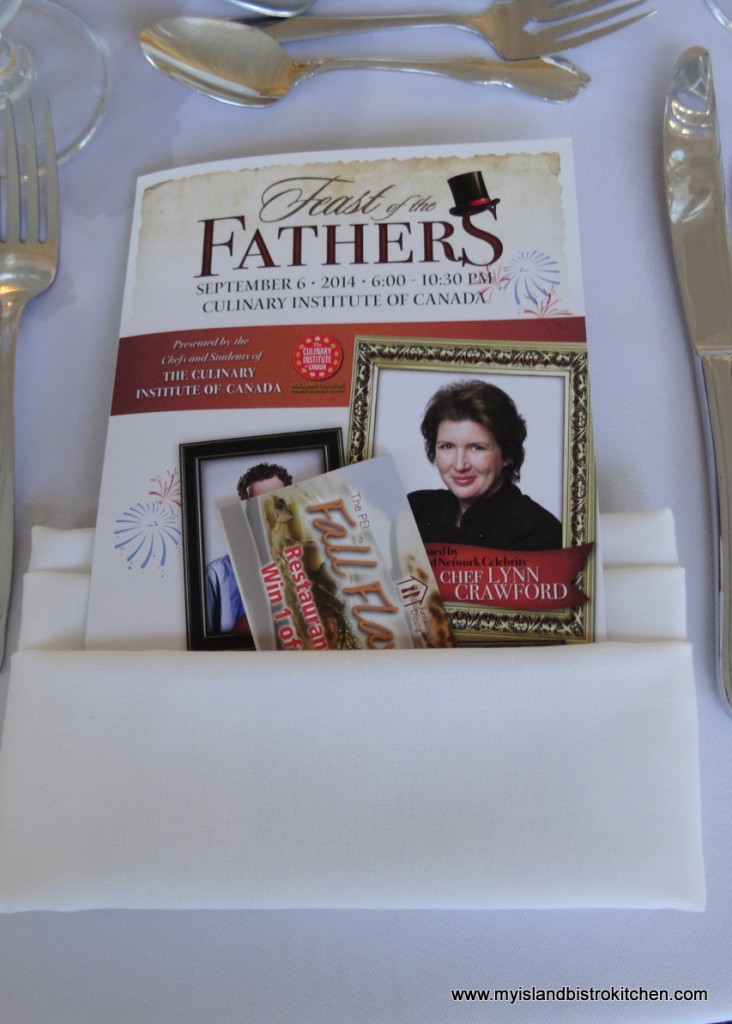 Take a look at the evening’s program and menu….. 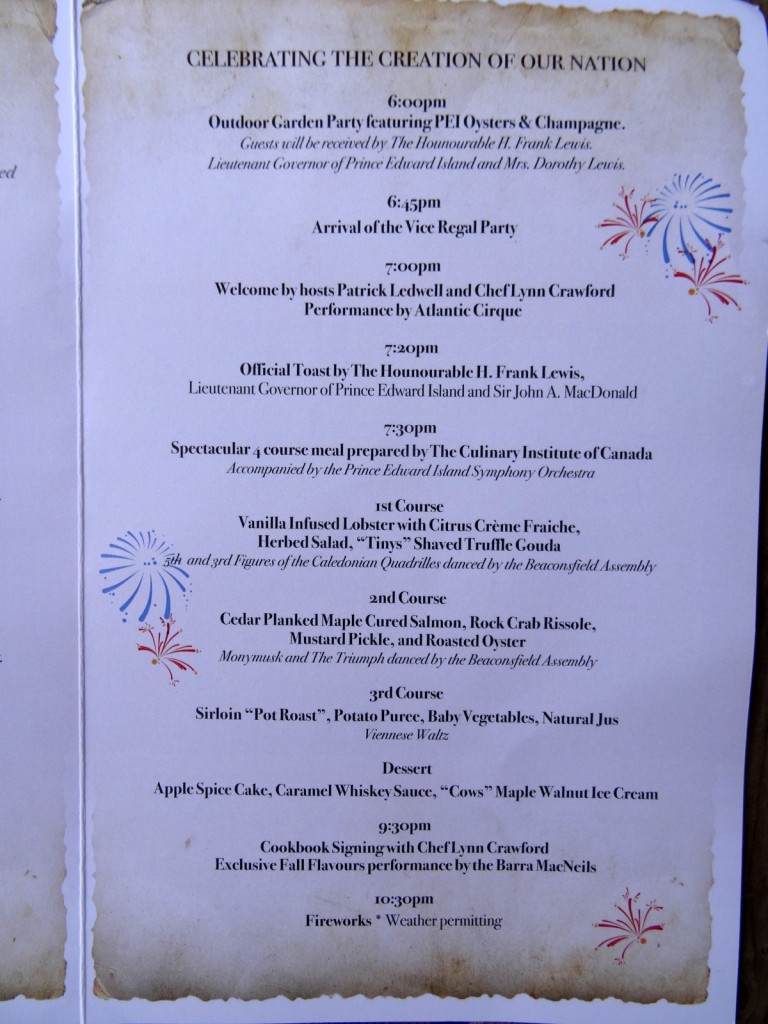 The PEI Symphony was setting up and tuning the strings.

These two proved to be a great combo. 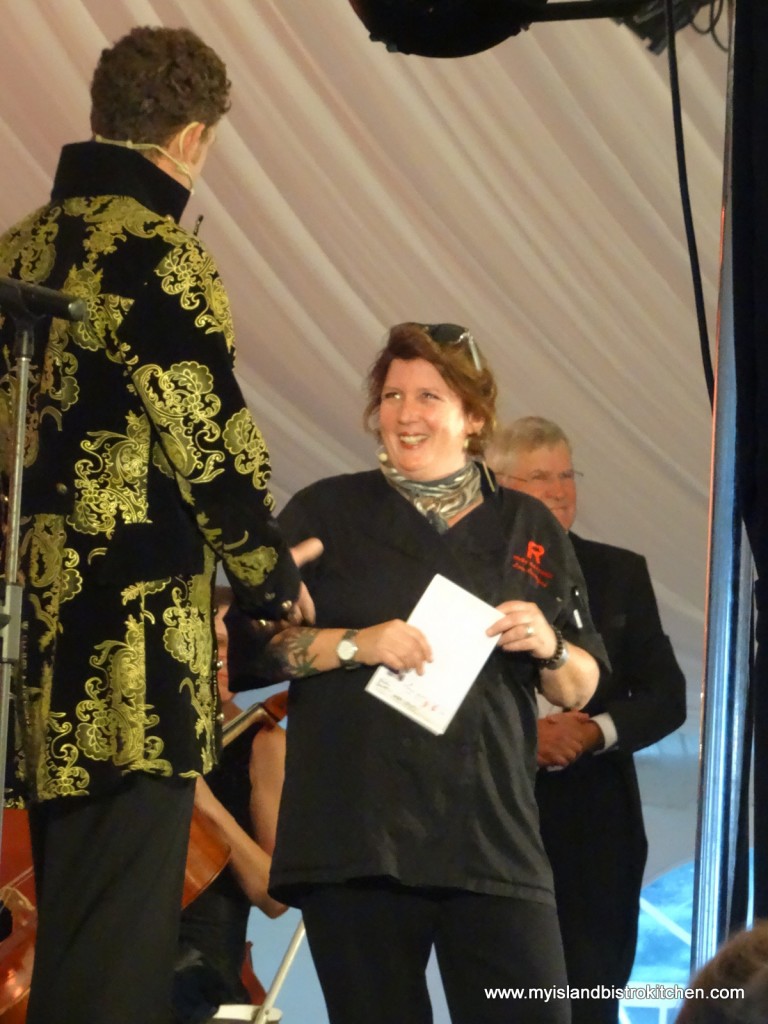 A pre-dinner performance by the Atlantic Cirque thrilled guests.

The Lieutenant Governor,  with Sir John A. MacDonald (on the far left of photo below) looking on, made the Official Toast and then the scrumptuous meal commenced.

Each course was accompanied by an element of entertainment reminiscent of events around the 1864 Conference.  At the beginning of each course, Chef Lynn described the meal to whet everyone’s appetite. 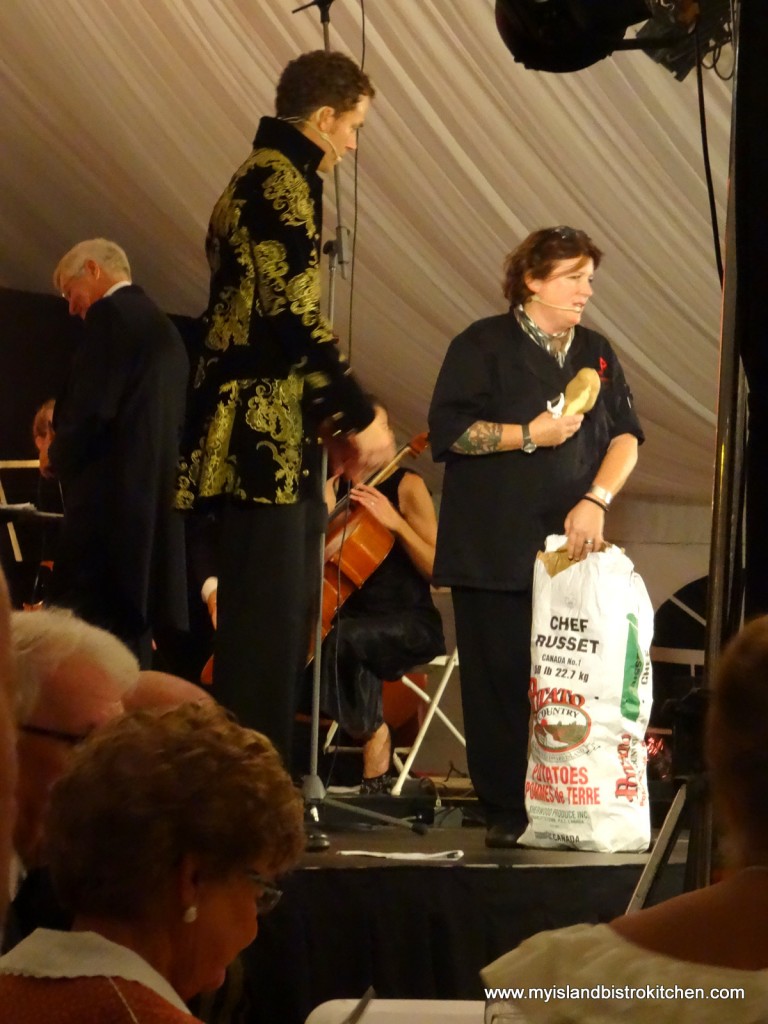 The PEI Symphony provided the musical accompaniment throughout the evening.

This was so tastefully and artfully presented (and it tasted every bit as good as it looked!).  The Beaconsfield Assembly Scottish dance group danced the 5th and 3rd figures of the Caledonian Quadrilles.

The Beaconsfield Assembly danced the Monymusk and The Triumph during this course of the meal.

The Beaconsfield Assembly, joined by the Fathers and Mothers of Confederation, danced the Viennese Waltz and invited guests to join in.

To top the evening off, a late evening concert was provided by the Barra MacNeils while Chef Lynn signed her cookbooks which were available for sale throughout the evening. 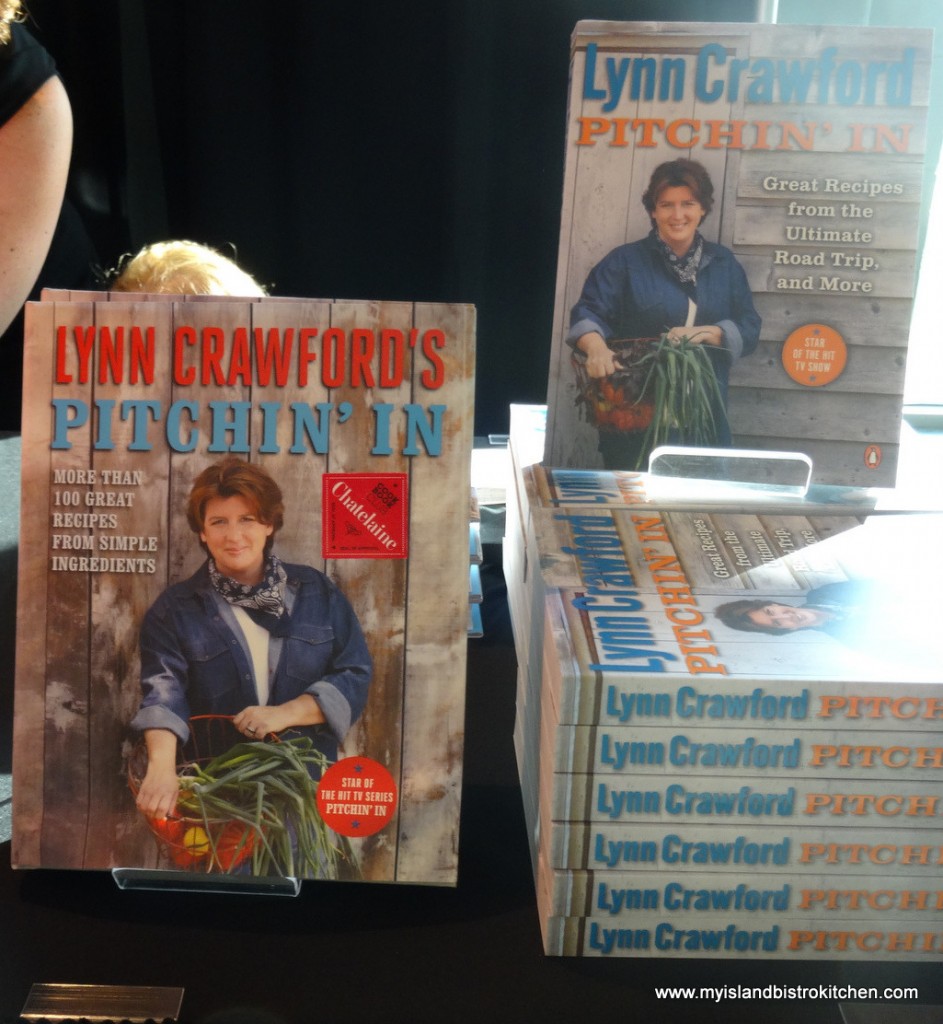 This was a full and entertaining evening – a sold out event.  The best way I can describe the experience is first class all the way, from the food to the service to the entertainment.  This event personified the “WOW” factor in every way.  It was a perfect way to celebrate the creation of our nation.  Hats off to the organizers, chefs, wait staff, and entertainers who wowed me yet again at a fine PEI Fall Flavours event. 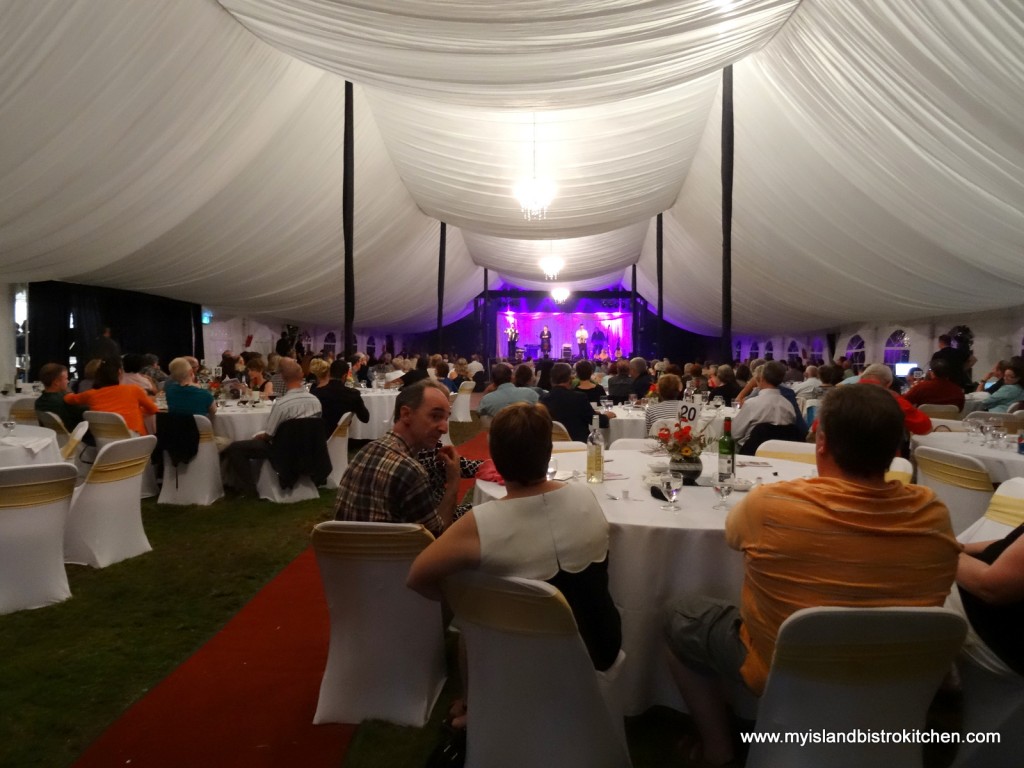 If you have never been to a PEI Fall Flavours signature event, I highly recommend them.  They are well-done and feature Island foods in many different ways.