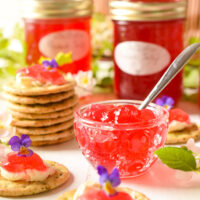 NOTE 1: The small ½-cup (quarter-pint) jar does not actually need the full 10 minutes of hot water canning. However, to remove it partway through, at the 5-minute point in the boiling process, would disturb the rolling boil and timing and thus interfere with the proper canning of the larger half-pint jars so, there are a couple of options. The first is to let the small jar remain in the hot water bath with the half-pint jars for the full 10-minute period. The second option is not to process the tiny jar in the hot water and to, instead, use it as the “tasting jar”, refrigerating and consuming the jelly within a couple of days. However, if the desire is to can the entire batch of jelly into the small ½-cup (quarter-pint) jars, then process the basket of them for 5 minutes, instead of 10. These tiny bottles make great gifts, especially if they are accompanied by fresh scones!