It’s the time of the year when people are busy with holiday preparations which often brings a host of events and a shortage of time to prepare for them. I recently met with a couple of Island chefs to chat about canapés and to find out what’s trendy these days in finger foods.

Jennifer & Mike Levy, from Rusticoville, PEI, operate Green Island Catering Company. Yes, there is help for your holiday events! The couple, both originally from Ontario, took a rather roundabout way to find their way to the Island. Both have university degrees and worked in the corporate world in Calgary before heading off to the sunny Caribbean to spend three years living and working in Grand Cayman. While soaking up the southern sun, they found themselves working in the food industry and becoming more interested in cooking. They came across some Prince Edward Islanders living in Grand Cayman who kept telling them about the Culinary Institute of Canada in Charlottetown, PEI, suggesting they check it out. But, first, they returned to their native Ontario where they spent a few months during which time Mike took a hobby cooking course at George Brown College which really sealed his interest in pursuing a career in culinary arts. Soon, they were on their way to PEI to study at the Culinary Institute from which both graduated from the two-year program in 2012.

While they have worked in various restaurants since graduating from culinary school, they have started a successful catering business and will cater any event of any size. In fact, they have catered the PEI Legislature’s “Speaker’s Tartan Tea” for the past three years.

I began by asking the chefs how many canapés should be prepared per person for an event. As a general rule, they suggest 3-5 per person if the time of the event is not a regular meal time or if it is at a time that guests most likely would have already eaten. However, if the event is between the hours of 11am – 1 pm or 5pm – 7pm, then 5-7 canapés should be prepared per guest. 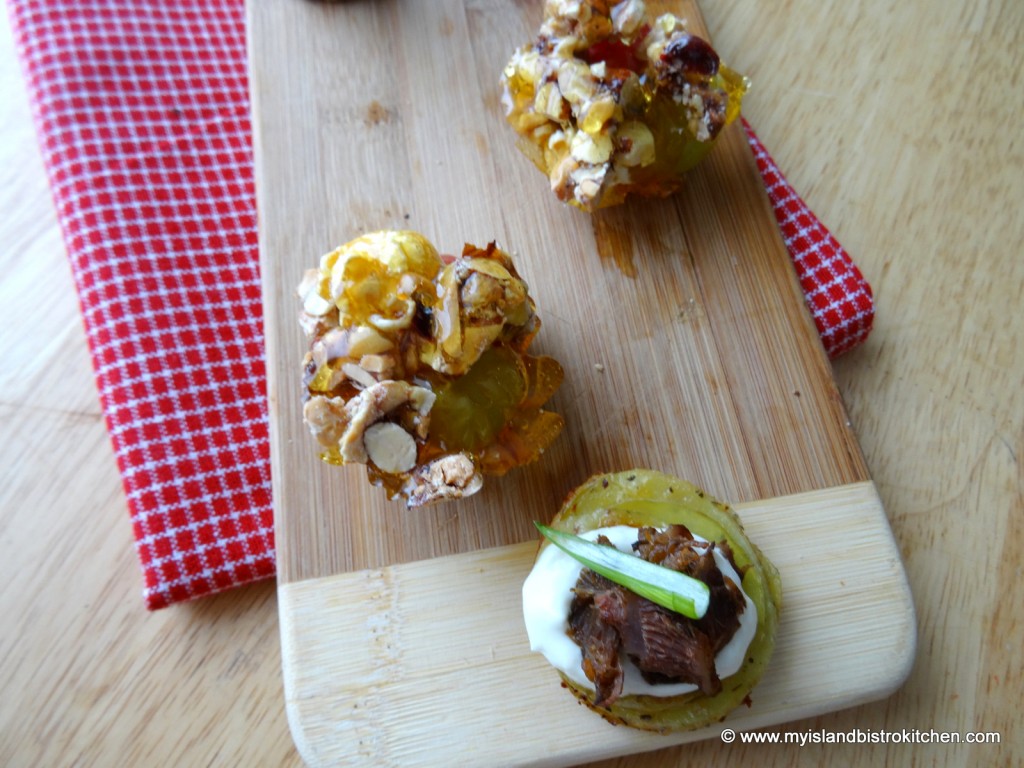 We then discussed what’s trendy in canapés these days. Canapés generally consist of three parts: a base, some kind of sauce, and a garnish. The base can consist of a variety of items – for example, small biscuits, phyllo pastry, spring roll wrappers, or wonton cups. 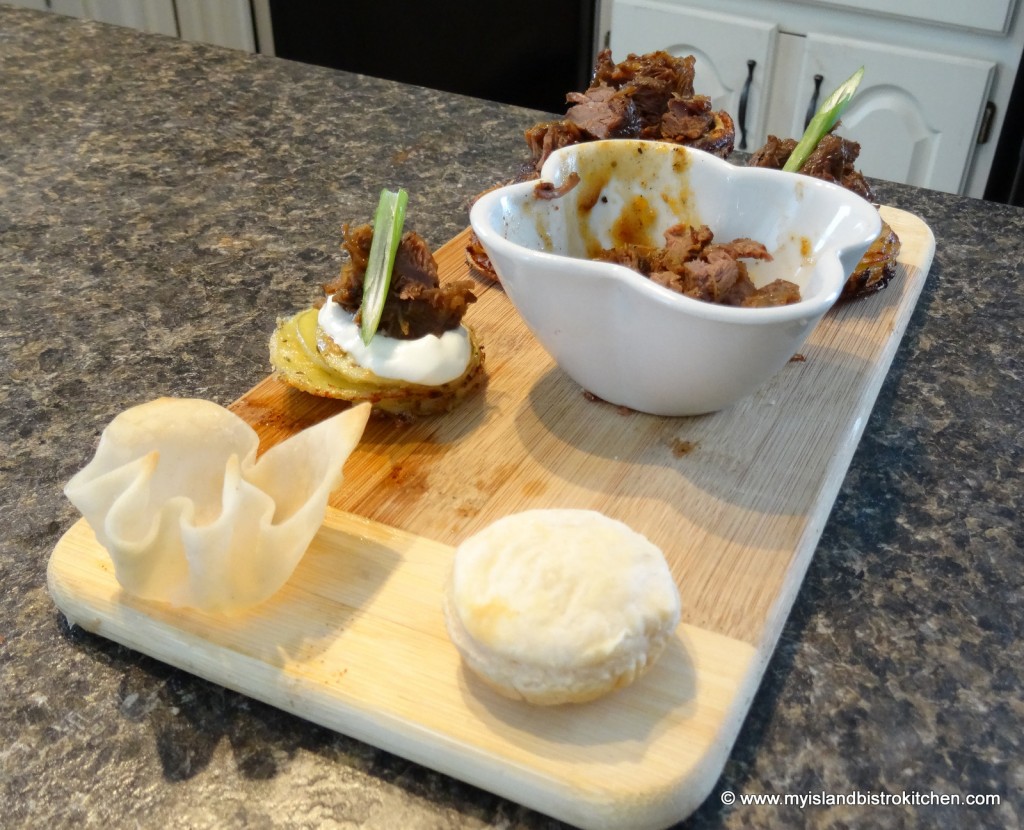 Braised beef and pulled pork tend to be popular in canapés, just as they are in main meal menu items.

Foods that are easy to prepare and canapés that include comfort foods are also popular. For example, tiny tea biscuits topped with braised beef or turkey/chicken are quite popular. Cookie dough shot glasses are also quite a trendy novelty item – they consist of cookie dough formed into a container shape, baked, and filled with a favourite liqueur or, for the younger crowd, milk. 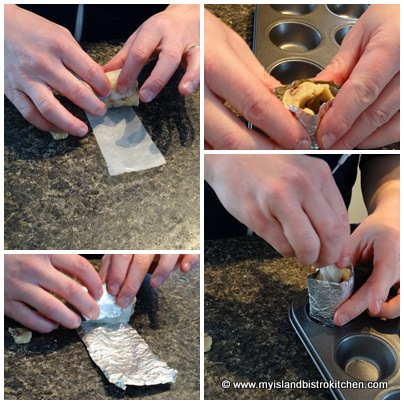 Or, make the cookie shot containers even larger and line them with melted chocolate (yum!) 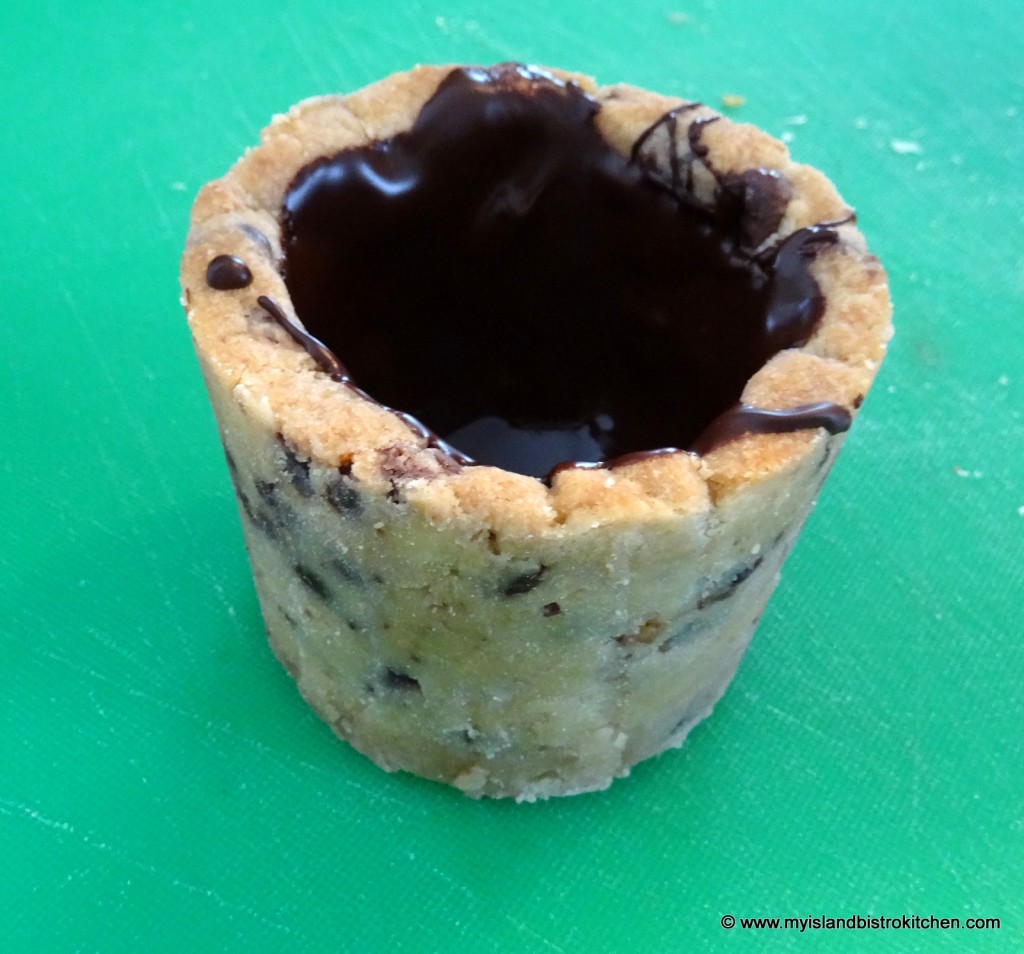 During my visit, the chefs demonstrated how to make a base from thinly sliced potatoes, seasoned with a mixture of herbs (such as rosemary, thyme, and oregano), grated Parmesan or Asiago cheese, and a bit of cream (yes, the real stuff!). Layered into greased muffin tins and baked for 20 minutes at 400°F, these make a tasty canapé base with a dob of sour cream or herbed cream cheese added and topped with braised beef or pulled pork.

These canapés are tasty with, or without, the addition of sour cream.

Jennifer also demonstrated how to make a sweet treat that consists of grapes, caramel popcorn, chopped nut clusters, and Cambozolo cheese, all held together with a caramel sauce made with corn syrup, sugar, and water.

So, if you are short on time this holiday season and want to take the stress out of preparing for a cocktail party or other holiday event, you may want to consider having the event catered. Jennifer and Mike run a full service catering company and can be reached by phone at 902-963-2176, by email at greenislcatering@gmail.com, or through Facebook at https://www.facebook.com/pages/Green-Island-Catering-Company/