Baked Beans make a very economical dish and freeze well for reheating later in the microwave.  These are a staple packaged in meal-portion sized dishes in my freezer.  I will make up a large batch and then divide them into serving sized containers that will freeze well.  I serve Baked Beans with homemade bread and molasses and mustard pickles and sometimes tomato chow.  When prepared ahead, they make a quick and nutritious meal.

We know beans are a good source of fiber and protein so they are good for our diet.  Making your own homemade beans is not difficult although it is a somewhat lengthy process:  The beans have to be soaked in water overnight, pre-cooked for about an hour or so, then baked in the oven for about 3 hours.  The bonus of homemade beans, however, is that they taste so much better than canned beans off the store shelf.

I like to use yellow-eye beans as I find they cook well and are not hard as I find dark beans to be.  My grandmother always grew the dark beans solely for the purpose of drying them and using them to make baked beans.  I always found the beans to be very hard despite that she would have baked them in a bean crock in the wood stove oven for hours and hours.

1) It softens the beans and lessens the cooking and baking times (the beans also expand to double or triple their size in the soaking process);

2) It allows the beans to absorb the liquid (become rehydrated) thus they will cook more evenly and hold their shape when baked (i.e., they won’t split open or become mushy)

3) It removes the indigestible complex sugars, making the beans easier to digest.

Beans, on their own with no seasonings, can be very bland and tasteless.  I don’t think my grandmother added much to her baked beans other than some molasses, brown sugar, and water.  My mother always added some onion and ground mustard along with molasses, brown sugar, and water but very little else.  I like to gently spice the beans up a bit and, over the years, have perfected a recipe that suits my taste.

When an ingredient calls for a “dash”, I use an actual measuring spoon that has the “dash” as a measurement.  Spices, and the amount added, are very much a personal preference so each cook should adjust them to his or her own tastes.  My recommendation, of course, is to make the recipe the first time using the measurements called for and then decide what needs to be adjusted for the next time.  As well, if there is a particular spice that you absolutely do not like, simply omit it.  The recipe that I have developed does not use large amounts of any one spice.  I did this because I still wanted the original bean taste and didn’t want any particular spice to overpower the natural taste of a traditional baked beans dish.

Some like to add salt pork, regular bacon, or cut-up weiners to the baked beans.  I prefer just the beans but that is a personal preference and meats can certainly be added, if desired.

Drain soaked beans in colander.  Discard water.  Place beans in large pot and add 4 cups fresh cold water.  Bring to a boil.  Reduce heat to low and add 1/2 tsp baking soda.  Cover and simmer for 45-60 minutes, stirring occasionally and fork-testing beans for doneness.  Beans should still be firm but not hard when cooked.  Do not overcook or beans will become mushy and lose their shape.

Bake, covered, for about 3 hours or until beans are fork-tender.  Check beans 2-3 times during baking to stir and add more liquid if needed. 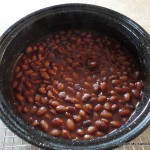 You may also enjoy this recipe for Baked Beans in Tomato Sauce.

Growing up in rural PEI, one of my favourite Spring-time memories was the tapping of maple trees, going to collect the sap every evening after supper, and watching the sap being boiled down on the stove for hours to make just a tiny bit of maple syrup.  It was a rite of Spring and heralded the beginning of warmer days after a long, cold Winter!

This Spring, MacPhee and Newby had 450 taps running.  This process depends heavily on cold, frosty nights (about -5ºC) and warmer days (+5 ºC).  The alternating freezing and thawing causes the pressure in the tree to change and forces the sap to start running when the temperature rises during the day.   On PEI, there is a short window of opportunity to produce maple syrup, typically a 5-6 week period in March/April.

Trees must be at least 10” in diameter to be tapped and trees of that size are usually 40-50 years old.  Holes are drilled into the maple trees and spouts are inserted.  Buckets with covers to keep out bark, dirt, and rain are then hung on the spouts and are used to collect the dripping sap.

Drilling holes into the tree and removing sap is not harmful to the maple trees and the same trees can be tapped year after year, provided new holes are drilled each time.  It is not uncommon to have up to 3 taps in large trees.  In fact, Max showed me one large old maple tree just outside the sugar shack that had three taps running and we examined the tree’s maple syrup producing history as we found various marks from previous years’ tappings.

The sap is clear, has no color, and has the consistency of water.  I found it had little taste although it is 2% – 4% sugar and I could detect a slightly mild sweet taste but certainly nothing like the taste of the sweet maple syrup that is eventually produced from the sap.

While some operations collect the sap through a network of pipelines strung between trees, at Woodland they tap individual trees using the spout and bucket method.  Once every two days, the sap is collected from each tapped tree and placed in a large tank on the front of a tractor and transported to another large holding tank just outside the sugar shack.  The sap is then piped into the evaporator inside the sugar shack where the boiling process takes place.

The sap is boiled in a large pan on a wood-fired evaporator until most of the water in it is boiled off and it boils down to a thick syrup.

This can take hours, not to mention patience and a close eye to make sure the sap does not boil too robustly and overflow the pan.

Sap is continually added to the pan as the water evaporates so it is a continuous process.  The boiling process causes a chemical reaction to occur in the sap and transforms it into a flavourful syrup.

There are different grades of maple syrup and grading is based on color.  The lighter the color, the higher the quality of syrup but the more subtle the taste.  The more amber, darker colored syrup has more flavour but, in grading terms, would be considered a lower grade syrup.  Light-colored syrup is traditionally used as a table syrup for pancakes, waffles, and French toast.  Darker colored syrup, on the other hand, is well suited for cooking and baking – e.g., ice creams and brulées as well as sauces and glazes for meats.

Woodland produces approximately 200 litres of maple syrup each year which they sell locally from their sugar shack and also sell to Island restaurants.  The syrup can also be purchased locally on PEI at Riverview Country Market on Riverside Drive in Charlottetown.

Maple syrup is a good source of manganese and riboflavin and contains antioxidants that boost immunity.

Maple syrup has multiple uses.  Perhaps the most commonly known is at the breakfast table on pancakes, waffles, and French toast.  However, it can also be widely used in many different cooking and baking recipes.  Over the next while, I will be posting some recipes using Island-produced maple syrup from Woodlands so be sure to come back and visit my website to see what is cooking and baking.