As I write this post, it is a statutory holiday known as Islander Day here in Prince Edward Island. As such, I thought it would be an appropriate time to showcase my small collection of PEI commemorative cups and saucers.

What is Islander Day?

Islander Day became a statutory holiday when passed by the Prince Edward Island provincial legislature on November 28, 2008, and was first observed in February 2009. Celebrated on the third Monday in February, businesses, schools, and provincial government offices close to allow Islanders to enjoy a mid-winter break for a day of relaxation, leisure activities, and time with family.

Today, we are observing Islander Day with a cream tea featuring commemorative china cups and saucers that bear both the Prince Edward Island coat of arms and the Island Tartan, both of which I will give a brief description of below.

Many manufacturers of china cups and saucers have created commemorative sets that feature provincial coats of arms and provincial tartans.

In the case of PEI, the English heraldic lion lies at the top of the coat of arms while the lower part of the shield has a large green oak tree and three small saplings as shown in the photo below. The significance of the lion lies in the connection to royalty. The lion appears on the coat of arms of Prince Edward after whom Prince Edward Island is named. Additionally, the lion also appears on the royal coat of arms of King Edward VII who is credited with having assigned the provincial arms.

The large tree on the right-hand side of the Coat of Arms represents the oak tree of England and the three smaller trees on the left represent the three counties that make up PEI – Queens, Kings, and Prince Counties.

The significance of the trees is also interpreted to connect to PEI’s motto, in Latin, “Parva sub ingenti” which, in English, translates into “The small under the protection of the great”. This has been PEI’s motto since 1769 when the island was called St. John’s Island. The red oak tree has been declared as PEI’s official provincial tree.

The PEI tartan (shown in photos above and below) was designed and registered in 1959 by Elizabeth Jean MacLean Reed from Covehead, PEI. Through an official tartan design contest, Mrs. Reed’s tartan was selected and adopted as PEI’s official tartan on June 16, 1960.

The colors of the tartan each represent some aspect of the Island: The overall reddish-brown color signifies the redness of the Island soil; the green portrays the grass and trees; the white represents the whitecaps of the waves that lap our shores, and the yellow is said to stand for the sun. Anyone who has ever flown into, out of, or over PEI (especially on a bright, clear day in springtime when fields of red earth are freshly plowed before crop planting) will attest that the colors of the Island tartan are an excellent replication of the Island’s land and seascapes.

I have three PEI commemorative cups and saucers in my collection – one produced by Royal Albert and two by Elizabethan Fine Bone China and all three are different. What they do share in common, however, is the provincial coat of arms and accents of the Island Tartan.

The Montrose cup shape is very characteristic of fine bone china cups and saucers, particularly from Royal Albert which first introduced the shape in 1962 with the well-known and famous Old Country Roses pattern.

The cup shape is characterized by petal-like ribbed panels beginning at the bottom of the cup bowl and widening out near the rim of the cup. Light gold trim accents the footed cup base, rim, and handle as well as the circumference of the matching saucer.

The high stylish handle on this cup is known as the loop-broken shape. This style of handle is very common in china cups and saucers but is not a particularly comfortable one to hold unless one has a very small index finger as there isn’t really much room for a finger to go through the tiny loop handle. These handles are meant to be held between the thumb and forefinger, making this style of cup slightly less secure to hold and drink from than the cups with a simple round or larger style handle. 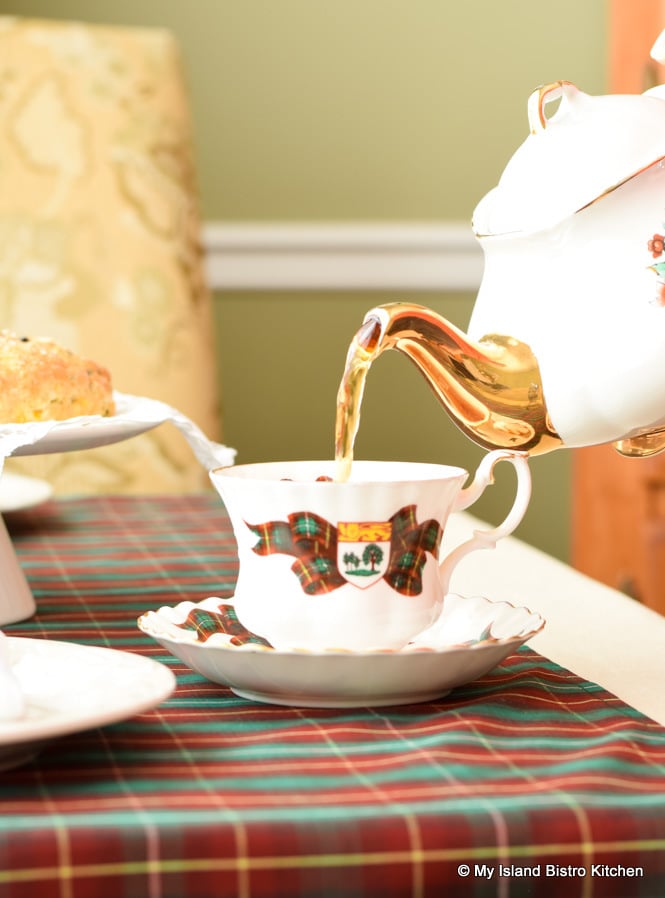 This cup and saucer duo features a pattern of the PEI Coat of Arms affixed in the center of a bow in the Island Tartan pattern. This bow, in small version, also appears on the rear interior of the cup and at the back exterior.

The matching gold-trimmed saucer has a fairly deep bowl shape. Three Island Tartan bows adorn the outside edges of the scalloped-edged saucer. The PEI Coat of Arms appears in the center of the largest of the three bows.

This pedestal cup has fairly straight sides with defined vertical ribbed panels from the cup bowl base to the rim where the cup flares very gradually and slightly. The handle style of the cup is the broken loop. The scalloped edge of the cup rim, the handle, and the saucer edge have gold accents.

The cup bears the PEI Coat of Arms in the center of Island Tartan Ribbon. The ribbon on this cup and saucer set is a brighter color than the Royal Albert set with a similar pattern. This cup also features a ribbon motif of the Island Tartan on the interior and rear exterior of the cup.

The gold-trimmed saucer with a slightly scalloped edge is a flatter style than the Royal Albert set. The saucer pattern bears three motifs of the Island Tartan ribbon with the PEI Coat of Arms in the center of the largest motif.

The third commemorative cup and saucer in my collection (and my personal favorite) bears a cup shape that mimics an hourglass as the bowl of the cup is rounded at the bottom, narrows in in the center, and flares out near the rim. I believe this style of cup would, in Royal Albert terms, be called an Elizabethan shaped cup.

This pert and elegant cup sits upon a heavily gold-trimmed pedestal and the strong gold accent is carried to the cup handle (broken loop style) and then to finer gilt trim around the cup rim. The cup bears ribbed embossing at the base of the cup bowl and just below the cup rim.

Like the previous Elizabethan cup and saucer, the pattern is composed of the Island Coat of Arms positioned in the center of Tartan Ribbon. The ribbon motif is extended to the cup’s interior and to the back exterior.

The matching saucer is quite similar to the previous Elizabethan cup and saucer duo but has ribbed embossing just inside the saucer’s gold-trimmed edge. For serving purposes, the coat of arms motif would be positioned at the 12 o’clock position so it would be properly visible to the tea drinker; however, for demonstration purposes here so viewers can see the design, I have shown it in the left-hand side in the photo below.

I have decided to keep today’s tea break at a Cream Tea status (as opposed to a full-fledged afternoon tea). As many of you will know, a Cream Tea is simply a pot of tea served with scones (freshly made, and preferably still slightly warm from the oven, of course) accompanied by clotted cream and a jam or marmalade of choice.

Now, as to which is applied first to the scone – the clotted cream or the jam —  well, I think that really boils down to personal preference (though I know some have really strong opinions on the order in which scone toppings are to be applied)!

My recipe for the Currant and Orange Scones can by found here. Today, I am serving my Rhubarb Marmalade (recipe here) with the clotted cream. And, the tea in the Ellgreave pot that happens to bear the colors of the Island Tartan? It’s King Cole Orange Pekoe Tea, a true Maritime favorite.

I use my china cups and saucers daily. I live with and enjoy them and see no point to storing them away where no one can see or enjoy their beauty. During the COVID pandemic, I made it a project to photograph and take inventory of my teacup collection. For those who are interested in seeing my collection, they are showcased on my Instagram account (link below).

Connect with My Island Bistro Kitchen on Social Media

Join the Facebook page for My Island Bistro Kitchen:  https://www.facebook.com/MyIslandBistroKitchen/

See the drool-worthy gallery of mouth-watering food photos from My Island Bistro Kitchen on Instagram: https://www.instagram.com/peibistro/ 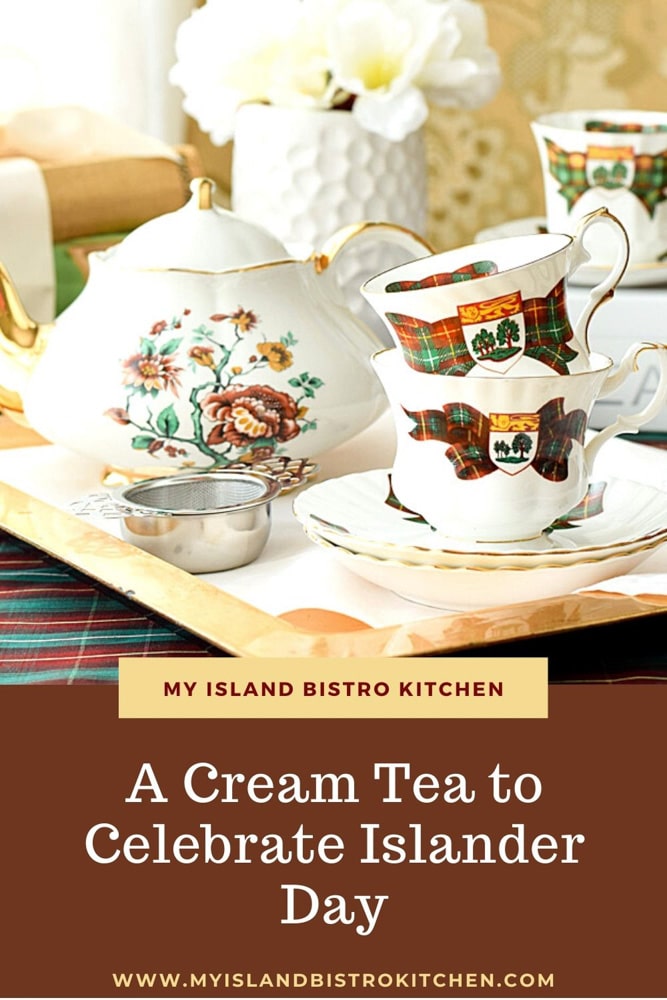