This old-fashioned boiled ham dinner is a meal that is so familiar to me that it never occurred to me that some don’t even know what a “boiled dinner” is.  So, today, I am going to demystify and explain the “boiled dinner” as I know it.

There are any number of meats that can be used to constitute a boiled dinner.  I grew up with a boiled dinner made with either a cut of  beef or a smoked pork picnic shoulder (ham) (bone-in).  My mother taught school and this was often a Saturday meal with enough cooked for leftovers for a weeknight meal early the next week as well as meat for sandwiches for school lunches.  Saturday would be a busy day with housework, laundry, and shopping so this was a simple, easy, and tasty meal to prepare.  The meat is put in a big pot on the stove and cooked slowly in water for probably a couple of hours and then root vegetables are added and cooked in the broth – no thickening.  These veggies would typically include parsnips, turnip, carrots, and potatoes.  As those of you who follow my blog will observe, I tend to cook with a fair bit of seasoning.  A boiled dinner, however, is the exception; I use absolutely no seasonings whatsoever, not even onion.  I let the natural flavour of the meat do all the seasoning. With all the vegetables cooked in the same pot in a flavorful broth, this makes a nutritious and wholesome meal.  And, there is nothing like the tantalizing scent of a boiled ham dinner simmering on the stove!

Earlier today, I had a discussion with some friends and acquaintances about their versions of a boiled dinner.  I learned that, depending on the region of the country you may come from, different meats are used as well as different vegetables.  For example, someone from the south shore of Nova Scotia makes her boiled dinner with corned beef to which she adds turnips, cabbage, and potatoes.  Another, in addition to the usual root veggies, adds onion and cabbage in her boiled ham dinner and finishes the cooking process by placing the mixture in the oven for about a half hour.  Yet another tells me her version of a boiled dinner is either pork and fiddleheads or pork and sauerkraut.  Essentially, then, we can conclude that a boiled dinner is a cut of meat of some sort, cooked in water to make a broth, to which a variety of vegetables (as many or as few as you like) can be added in the later stages of cooking.  It’s dinner in one pot!

I am not so fond of a boiled beef dinner.  My favorite is the boiled ham dinner, as we refer to it.  The important thing about the meat is that it should have a bone in it to add to the flavour and it should be cooked slowly.  The slow cooking process makes the meat very tender.  Some may fully cook the ham and then remove it and cook the vegetables separately in the broth afterwards.  I cook the meat and veggies altogether because that’s what my mother and hers before her did.  The leftover ham can be served cold with salads or scalloped potatoes and it also makes really tasty sandwiches.

So, here is my method for making an old-fashioned traditional boiled ham dinner:

The ingredients are simple:  a smoked pork picnic shoulder (ham) and root vegetables of choice.

Place the ham in a large stock pot and add water to cover the meat. 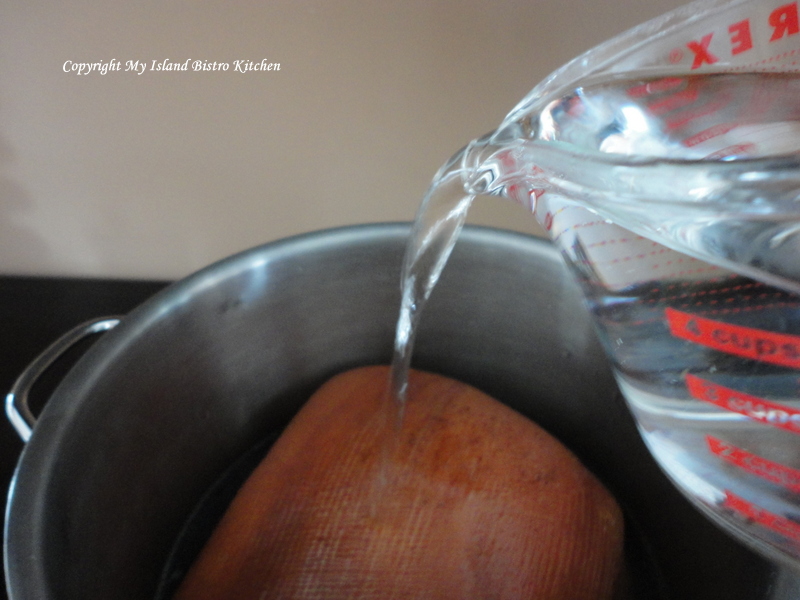 Boil the ham slowly and gently for 2 – 2 1/2 hours (depending on its size) then add the vegetables, starting with those that take longest to cook – e.g., parsnips.  Continue to simmer the meal for about 20-30 minutes then add chunks of cut-up turnip.  Cook for about another half-hour. 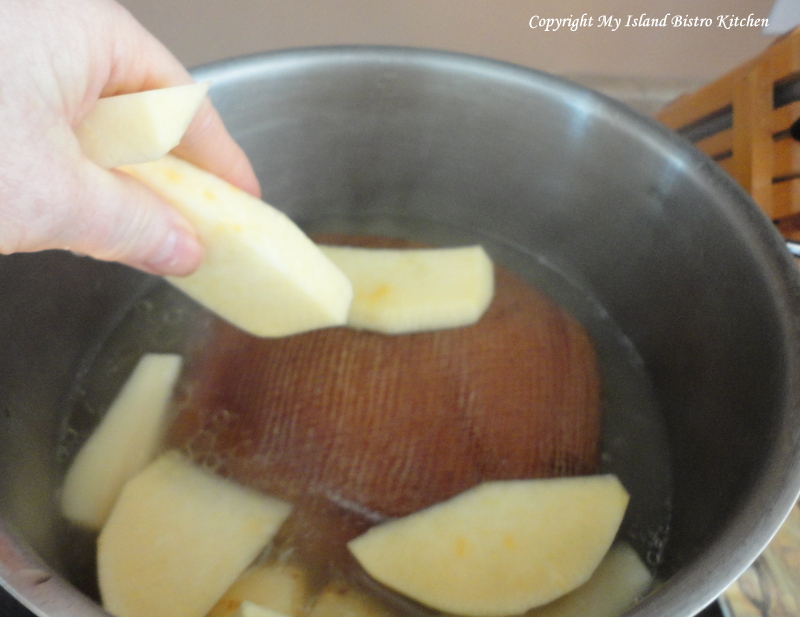 Add the carrots and continue the cooking process for another 20 minutes or so. 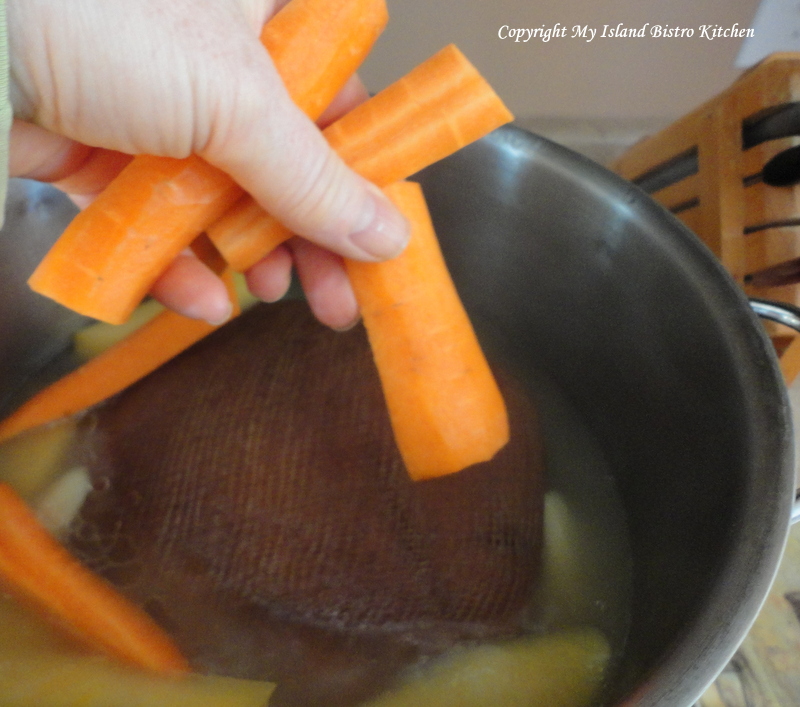 Finally add the potatoes – if they are large, halve them.  Cook just until the potatoes are fork tender – about 15-20 minutes.  Be careful not to overcook the potatoes as they will break up and become mushy. 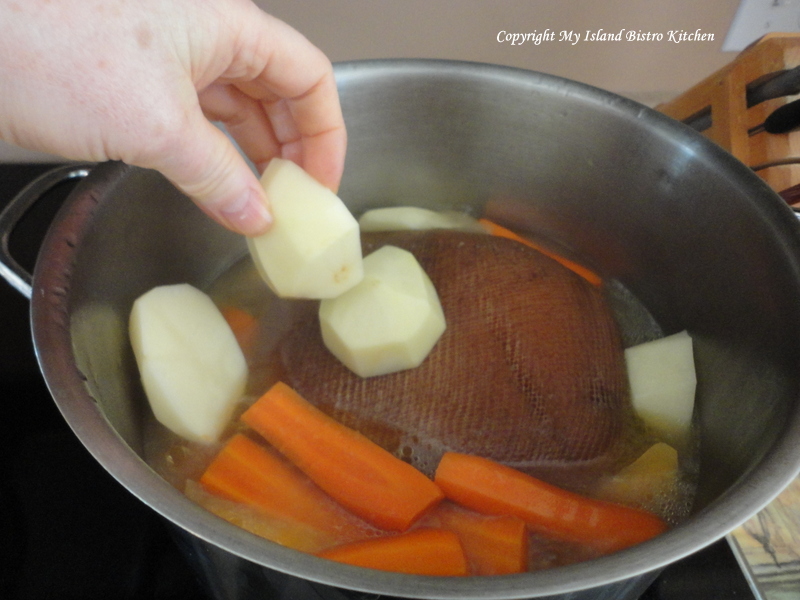 Remove the ham from the pot and transfer to a large plate or platter.  Remove the netting (if any) on the ham.  Slice. 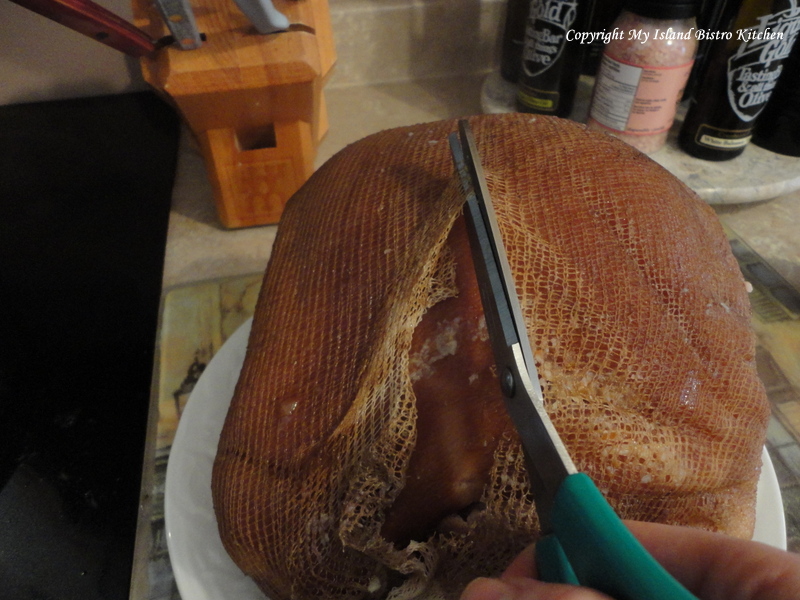 Using a slotted spoon, remove vegetables and plate meal with slices of ham.  If desired, spoon some of the broth over the vegetables.  Homemade mustard pickles are a nice accompaniment to this meal. 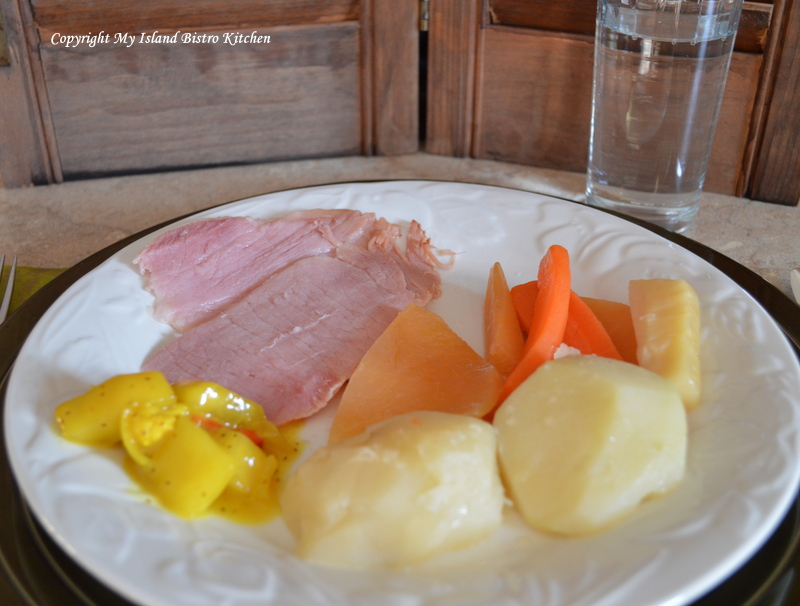