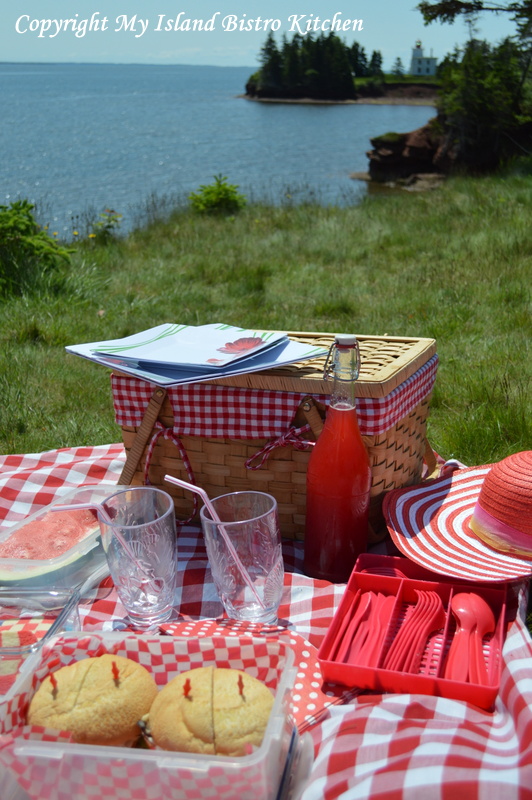 In keeping with the colors of the Canadian flag, as you can see, my color theme for the Canada Day picnic is red and white. 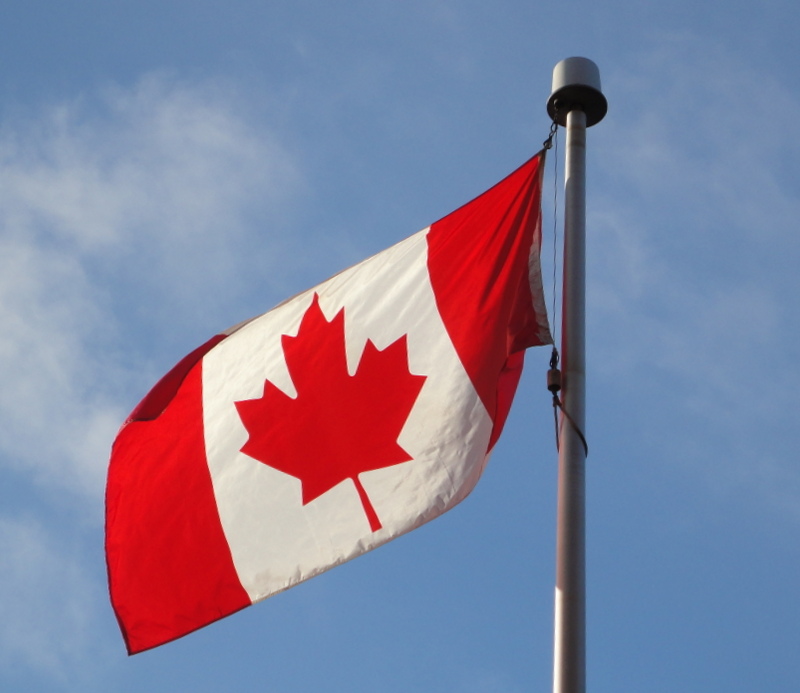 Prince Edward Island may be the smallest province in Canada but it boasts being the “Cradle of the Canadian Confederation” because Charlottetown, the capital city, was the location for the first meeting of the Fathers of Confederation in 1864 as they laid the groundwork for Canada to become its own country on July 1, 1867.  The Maritime Colonies (now Prince Edward Island, Nova Scotia, and New Brunswick) were meeting in Charlottetown in early September, 1864, to discuss the possibility of Maritime Union.   Representatives from Upper and Lower Canada (present-day Ontario and Quebec), upon hearing of this meeting, journeyed down the St. Lawrence River to Charlottetown to pitch the idea of a Canadian Union.   The individuals who attended this historic meeting became known as the Fathers of Confederation.

As these Fathers of Confederation landed at the Charlottetown Harbour, they disembarked and headed up Great George Street to what is now known as Province House where the meetings were held to discuss the possibility of Canadian Confederation.  The photograph below of Province House is taken from Great George Street and depicts what the Fathers would have seen as they made their way from the waterfront to this now historic site.

There are many celebrations happening across the Island and across Canada, to celebrate the birth of our nation.  One of the most colorful celebrations on PEI is the parade of fishing boats out of North Rustico Harbour, on the North side of the Island.  The photographs below are from the 2012 parade but, this being an annual event, a similar one will take place this year as well.

The parade of fishing boats is quite a spectacular event that always draws a large crowd as dozens of fishing boats from North Rustico and neighbouring harbours are decorated in red and white and sail out of the harbour with Canadian flags waving in the breeze.  If you are on the Island on Canada Day and have never attended this event, I recommend it as a must-see festivity for Canada Day as it shows true Canadian spirit. 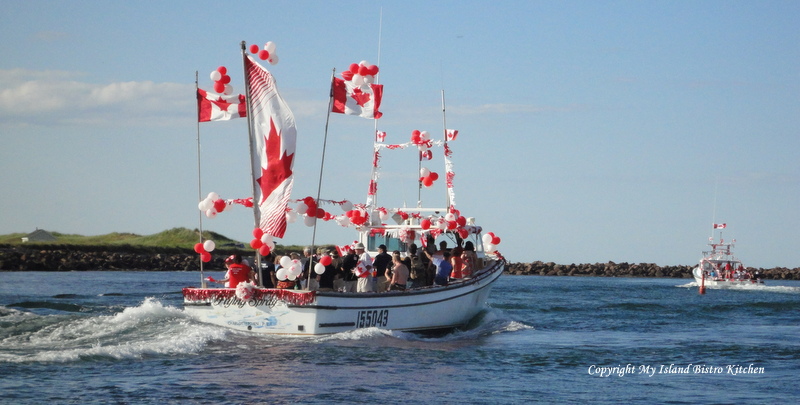 This year, I am on the South side of the Island, having chosen the National Historic Site of Port-la-Joye/Fort Amherst that overlooks beautiful Charlottetown Harbour, as the scenic location for a Canada Day picnic as our celebration of Canada’s birthday.

Port-la-Joye/Fort Amherst is located in Rocky Point, PEI.  In the background of the photo below, you can see the Blockhouse Point Lighthouse, established in 1851, the second oldest lighthouse on the shores of PEI.  This lighthouse is on the west side of the entrance to Charlottetown Harbour and guides ships entering the Harbour.  Many ships come and go past this historic lighthouse, including dozens of cruise ships that make Charlottetown one of their port stops. 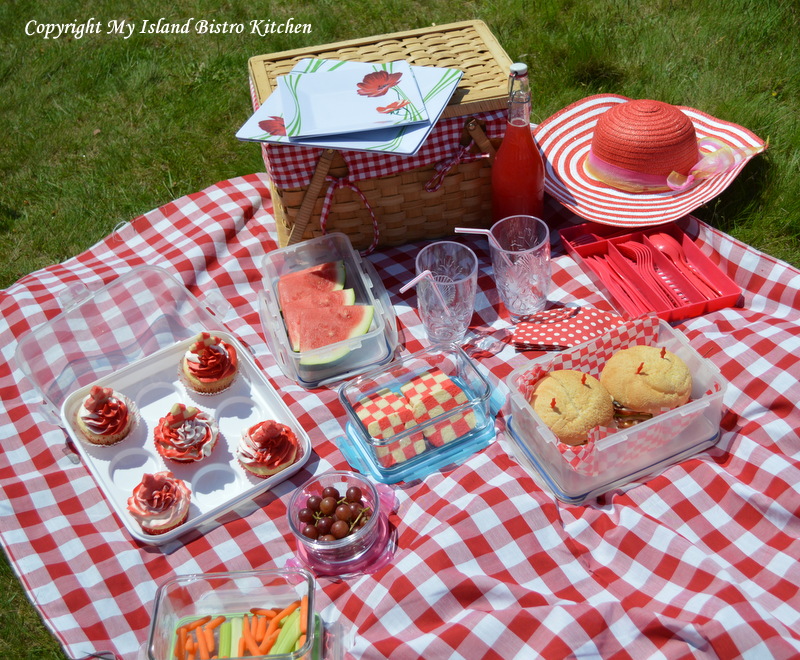 I love the country look and feel of checkered tablecloths.  My antique picnic basket just happened to be lined with red checkered fabric so it fit right into the color theme. 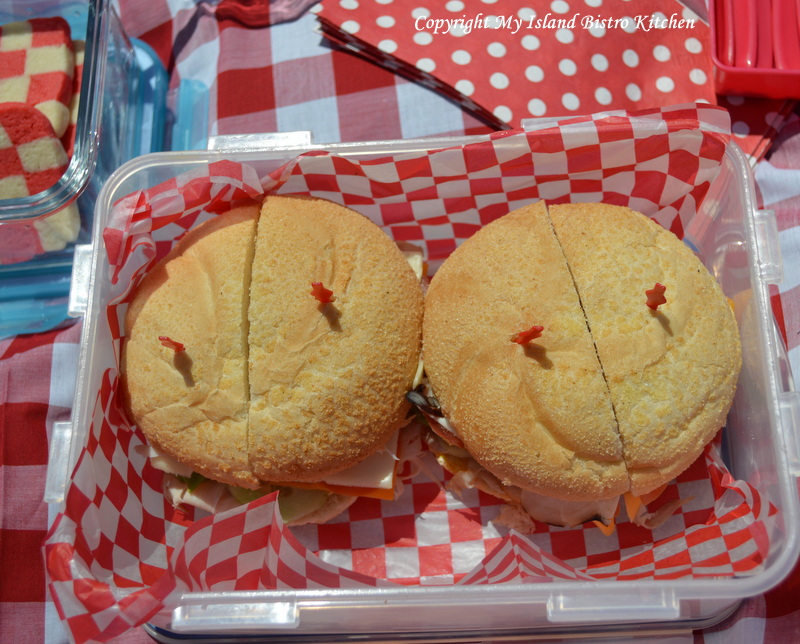 For the sandwiches, I chose good quality Kaiser rolls and filled them with tasty ingredients.  I started with a spread of mustard on one half of the roll and mayo on the other half.  On the bottom half of the roll, I then added several pieces of shaved Tuscan ham, followed by a layer of cucumber slices, a slice of cheddar cheese, leaf lettuce, sliced tomato, a slice of Havarti cheese, and topped it off with shaved turkey breast. 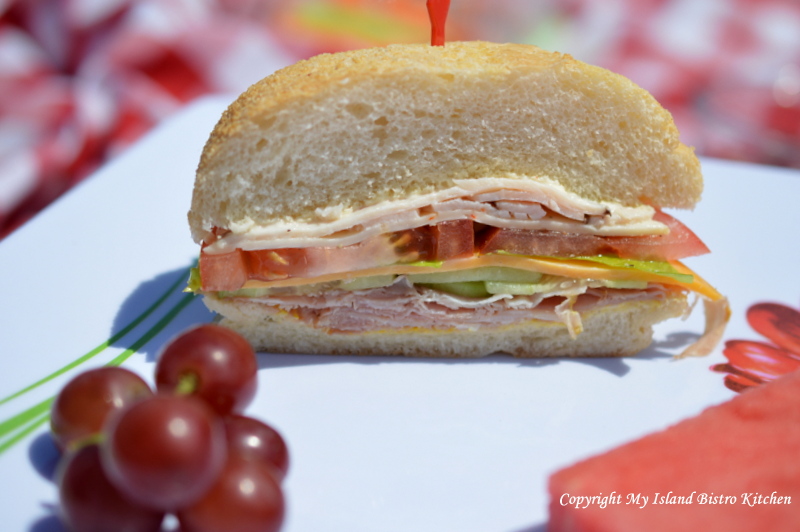 Because this is a rather thick roll, I held it all together with piks to make it easier to handle. 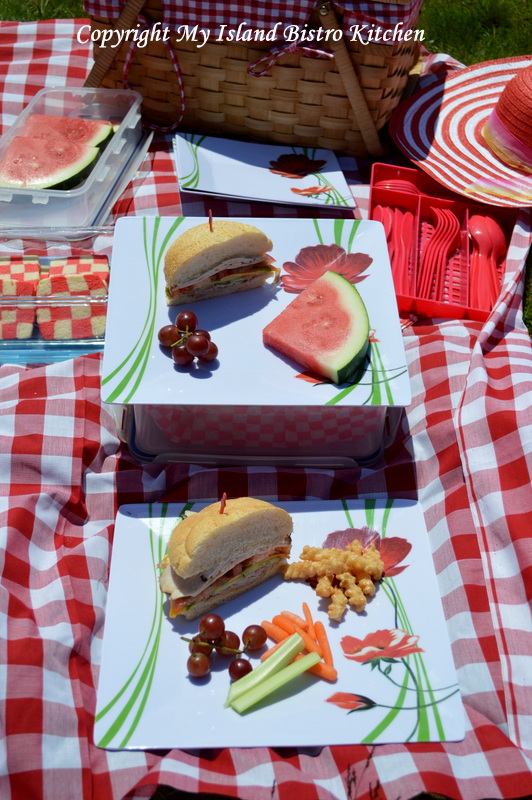 Plastic picnicware has improved greatly over the past few years.  Some, like the ones in the photograph above, even have the look of fine dinnerware.  These durable and colorful plates actually just came from a local dollar store.  Using unbreakable dinnerware for picnics makes the occasion much more relaxed for everybody as there are no worries about breakage.

For beverage, I selected my Rhubarb Cordial to which I added fizzy lemon-lime soda.  The red color fit right in and the refreshing taste is unbeatable on a warm summer day.

Of course, every picnic menu has to have something for the sweet tooth.  I selected two offerings, the first being checkerboard sugar cookies – always a show-stopper and conversation piece. 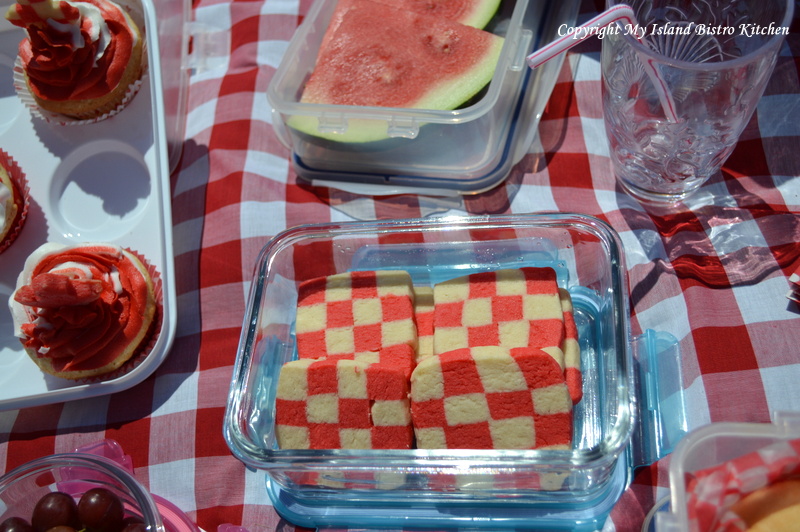 Cupcakes always make a fitting end to any picnic, especially when they are laden with lots of tasty buttercream icing.

And the cupcakes are always better when they come with an extra treat of a tiny sugar cookie shaped like a maple leaf. 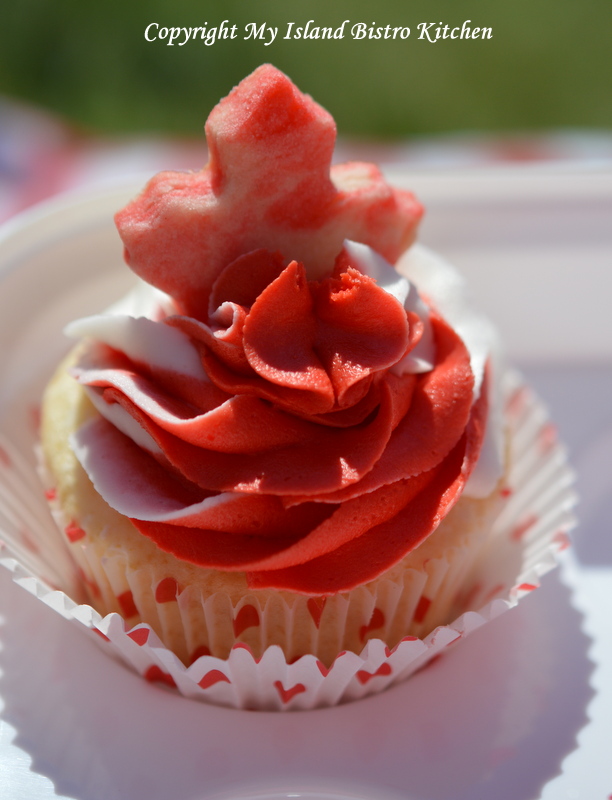 These would surely put anyone in the Canada Day spirit, don’t you think! 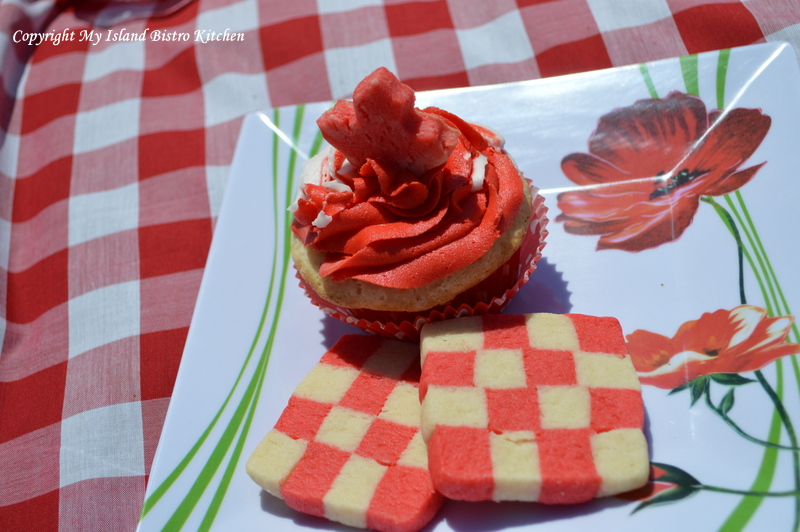 I hope you have enjoyed coming along on our Canada Day picnic. 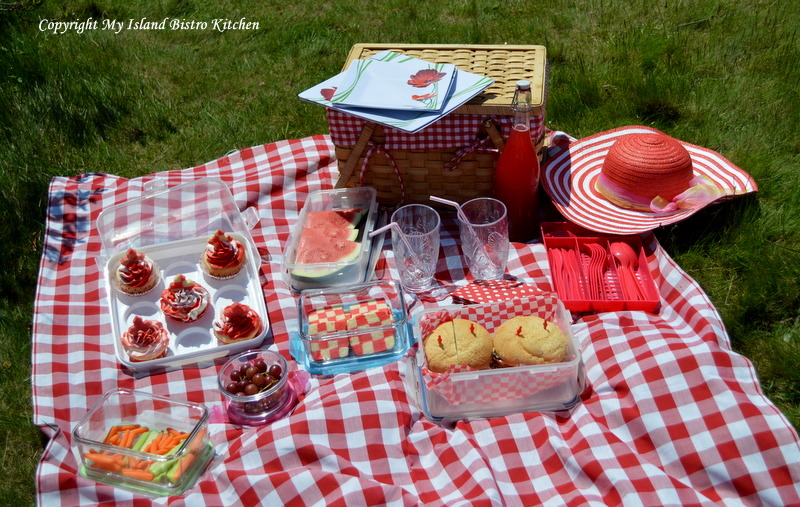