Ever been to a huge PEI barn dance/kitchen party?  That was the theme for the Toes, Taps & Taters Fall Flavours culinary event in O’Leary, PEI, on September 27, 2013. 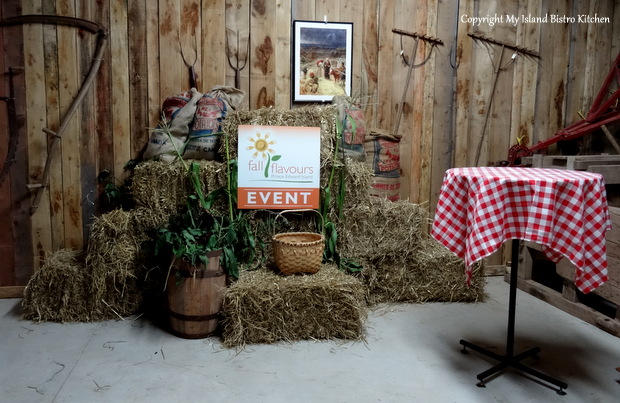 This was the first year for this signature Fall Flavours event.  The location was a logical and fitting one at the Canadian Potato Museum in O’Leary, in the center of one of the largest potato-growing regions on PEI.  Attached to this museum is a large new machine shed which made an ideal venue for a spud party.  And, what a perfect location it turned out to be for an event that was all about showcasing the versatility of Island spuds.  It was a toe-tapping good time with lots of music, dancing and, of course, great food featuring – you guessed it — PEI potatoes. 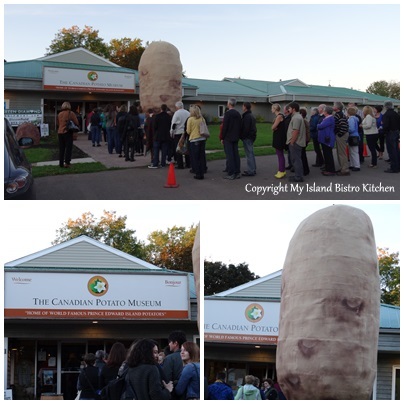 While the Museum proved to be an ideal location, it also meant a huge amount of work for organizers as they had to move all the big, heavy historical potato equipment to make room for tables, stage, bar, and transform it into a party atmosphere. 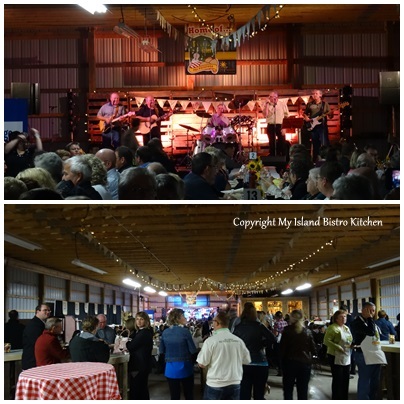 Out of all of the Fall Flavours events, this one sold out of its 250 tickets very early.  I asked Kendra Mills, Marketing Director of the PEI Potato Board that was behind the event why she thought this first-time event had been so popular to sell out a month before it was being held.  She believes several factors were at play.  The price point ($49.99/pp – CDN$) made it affordable, the location inside a potato museum also incited interest and, of course, the celebrity guest chef, Lynn Crawford, was also a huge draw.

Because this was a signature class Fall Flavours event, that meant a celebrity chef was host for the evening.  Distinguished international chef, cookbook author, and Food Network (FN) star, Chef Lynn Crawford proved to be an excellent choice as the event’s celebrity host.  You may know Lynn from the FN series, “Pitchin’ In” or you may have seen her on the popular series “Iron Chef America.  Indigo bookstore was also on hand during the evening selling Chef Lynn’s books and she was very obliging to autograph copies. 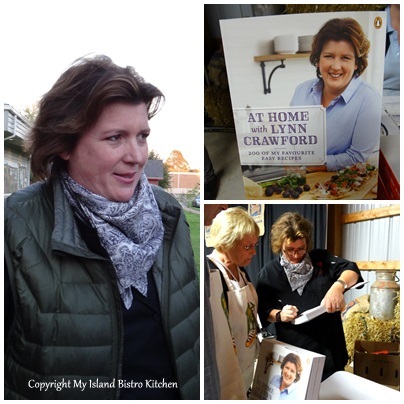 The evening started out with time for photo opps with Chef Lynn who greeted guests  just outside the door to the Museum.  This was followed by a meet and greet cocktail party with delicious hors d’oeuvres, wine from PEI’s Newman Estate Winery, and local entertainment. 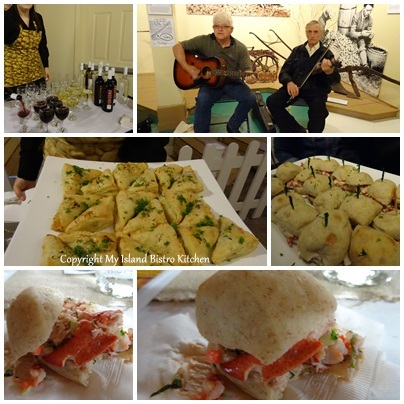 Each guest was presented with one of these aprons as a souvenir of the event (and, no, the potato harvester wasn’t posing for the photograph – the farmer just happened along to dig the field of potatoes beside us as I was preparing to photograph the apron the morning after the event).

Here was the mouth-watering menu attendees enjoyed throughout the evening: 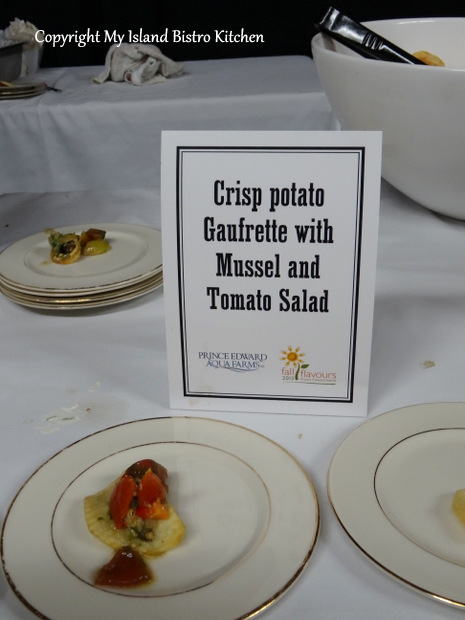 Chef John Pritchard from the Terre Rouge Bistro in Charlottetown, was in charge of the meal preparation and was assisted by staff from his Bistro as well as restaurant and wait staff from the nearby Rodd’s Mill River Resort. 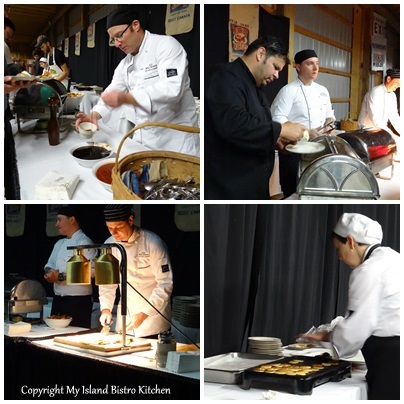 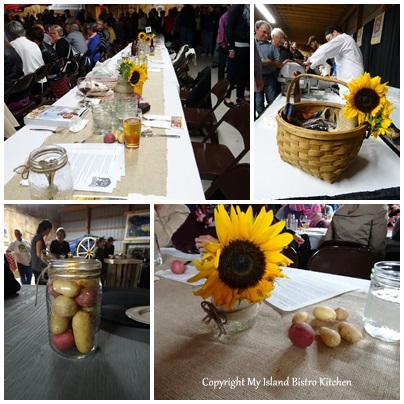 The MC for the event was Rob Barry from Morell, PEI, who kept the evening alive with his humour and potato trivia.  Music was supplied by the Ellis Family Band from Summerside, PEI, and Dance Virtuoso was on hand to teach folks how to do the two-step. 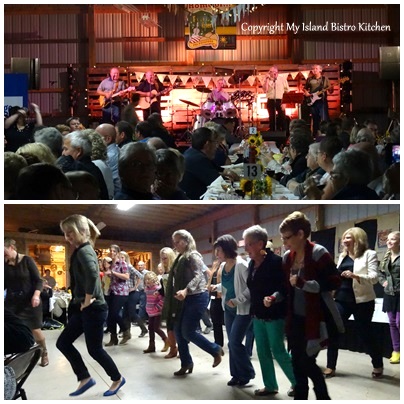 What would a party featuring potatoes be without a potato peeling contest!  This proved to be a fun event as two teams of four competed in a relay race – Chef Lynn’s team and Chef Rob’s team (or as he referred to them as “Team Awesome”) —  to see who would be the fastest potato peelers on the Island.  MC Rob declared his “Team Awesome” the winner (even after Chef Lynn kept trying to distract his team)! 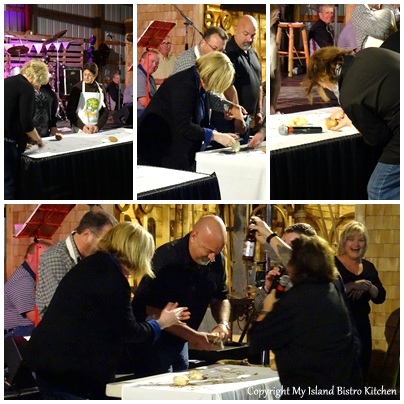 When asked what having this event as part of the Fall Flavours Festival means to the PEI potato industry, Kendra Mills had this to say:  “If agriculture is the fabric of the Island, then potatoes are the threads.”  She also said the PEI Potato Board was looking forward to having the opportunity to have guests learn more about the potato industry and the farmers who grow the spuds that eventually make it to consumers’ tables.

During the evening, everyone repeated a Potato Farmer’s Oath and was sworn in as honorary potato farmers. 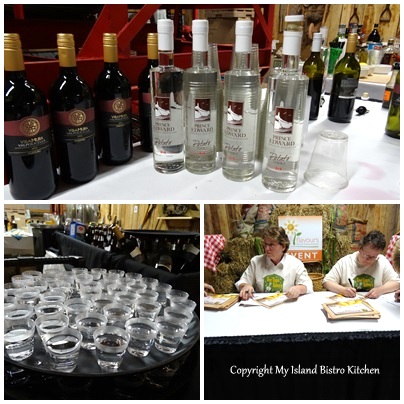 Of course, this swearing-in ceremony included libation in the form of potato vodka distilled in Hermanville, PEI, by Prince Edward Distillery (see my previous story on the Distillery here).  A rousing chorus of “Bud the Spud” was sung with great gusto to complete the ceremony.  Each attendee was presented with a certificate certifying them as an Honourary PEI Potato Farmer.

As a finale to the evening, out came the French fries along with the PEI potato chocolate bar. 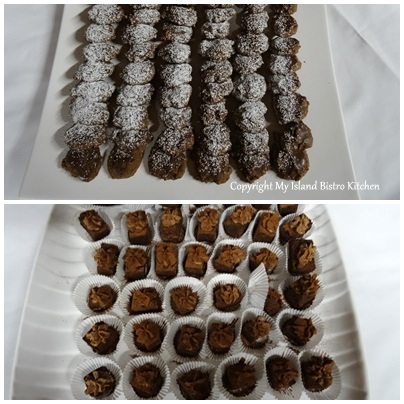 This event was well done and offered attendees a glimpse into what a downhome PEI barn or kitchen party entails….and there were many people from off Island in attendance; in fact, I think they might just have outnumbered the Islanders present.  It also provided the opportunity to try potato in ways people might never have had them before.  This included Chef Lynn’s Crispy PEI potato flatbread with Avonlea clothbound cheddar and herb pesto. 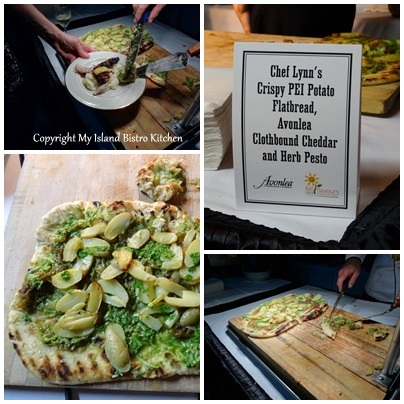 And then, of course, came the pièce de résistance of the evening — huge bowls of “Cow Chips”, milk chocolate-covered potato chips produced right here on the Island by Anne of Green Gables Chocolates. 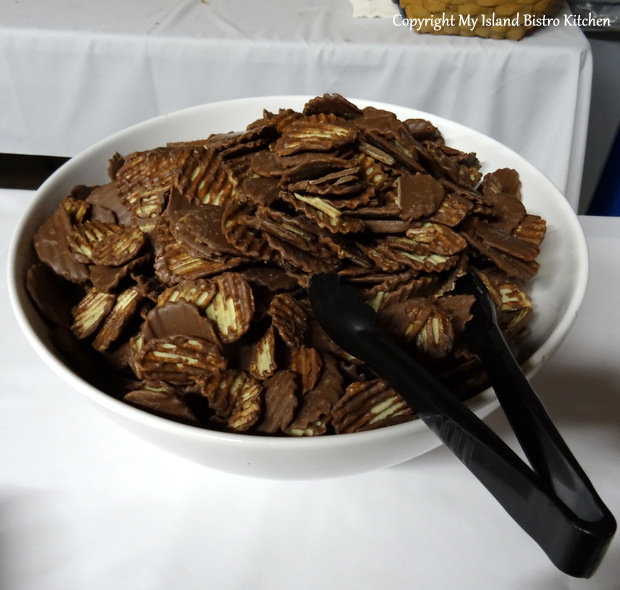 As the evening wound to a close, each attendee was presented with a 5 lb. bag of “Bud the Spud” potatoes as well as a sample of potato fudge. 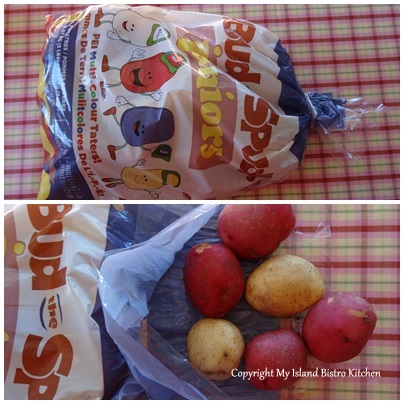 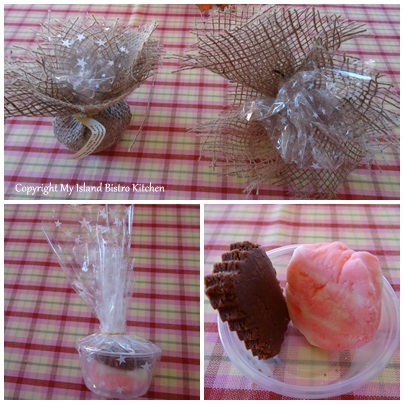 This was my fourth and last Fall Flavours event for 2013 and it certainly was a big party as the month’s culinary events on the Island draw to a close this weekend.  If you are an Islander, I highly encourage you to consider taking in Fall Flavours events in 2014.  If you live off-Island and are wondering what the best time of the year would be to visit PEI, I recommend you consider September if you are a foodie because the month is jam-packed with many food and culinary events and visiting celebrity chefs.  Some events are repeated year-to-year because of their popularity and organizers will often add some new variety events as well.  Be sure to check out the Fall Flavours website throughout the year for news on upcoming Fall Flavours events. 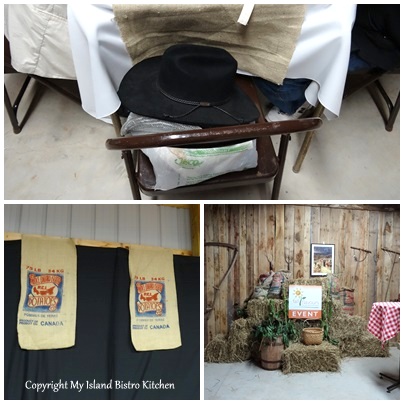