If you are a regular patron of the Charlottetown Farmers’ Market and happen to be a tea drinker, chances are you are familiar with Katherine Burnett and the Lady Baker’s Tea Trolley brand of teas and tea bar at the market.

I recently sat down with Katherine for brunch at the farmers’market to learn more about her tea business.

Katherine grew up on PEI but lived off Island for many years before returning in 2006. In 2001, while living in Charlotte, NC, Katherine began hosting tea parties as a ministry for the elderly. She named her afternoon tea party business “Lady Baker’s Tea Trolley” as a tribute to the memory of a friend, Irene Baker, who enjoyed the finer things in life, like afternoon tea. Interest in the tea parties grew to the point where Katherine was soon hosting afternoon teas for corporations, churches, and even the opera.

As her tea party business grew so, too, did her interest and knowledge in all things tea-related. She pursued online courses in tea blending and attended specialty tea conferences and is now at level 3 (of 4) of the process to be designated a tea sommelier. Katherine is also a member of the Tea Association of Canada.

In the fall of 2007, with just 16 varieties of tea and 2 tea-making machines, Katherine set up a tea bar at the popular Charlottetown Farmers’ Market. The teas come from the major tea-producing countries of India, China, Japan, Sri Lanka, South Africa, and Taiwan. The imported teas follow strict guidelines, are low in pesticides, and most come from members of the Ethical Tea Partnerships. 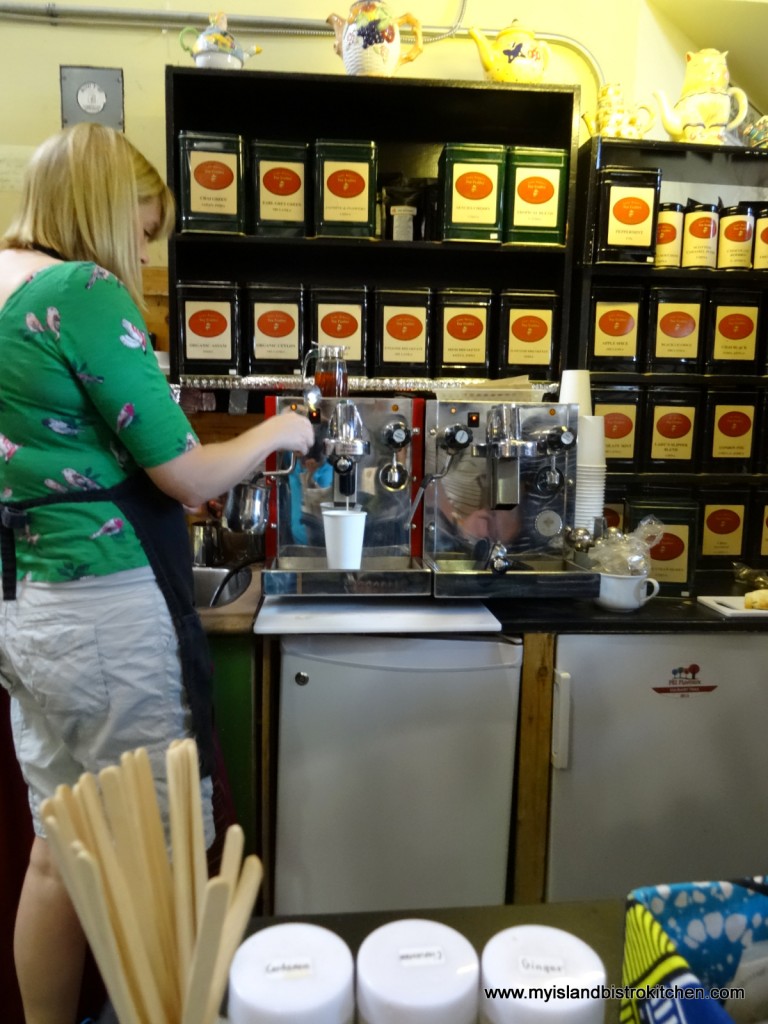 Katherine blends some of the teas herself and now sells some 60 varieties of loose tea. 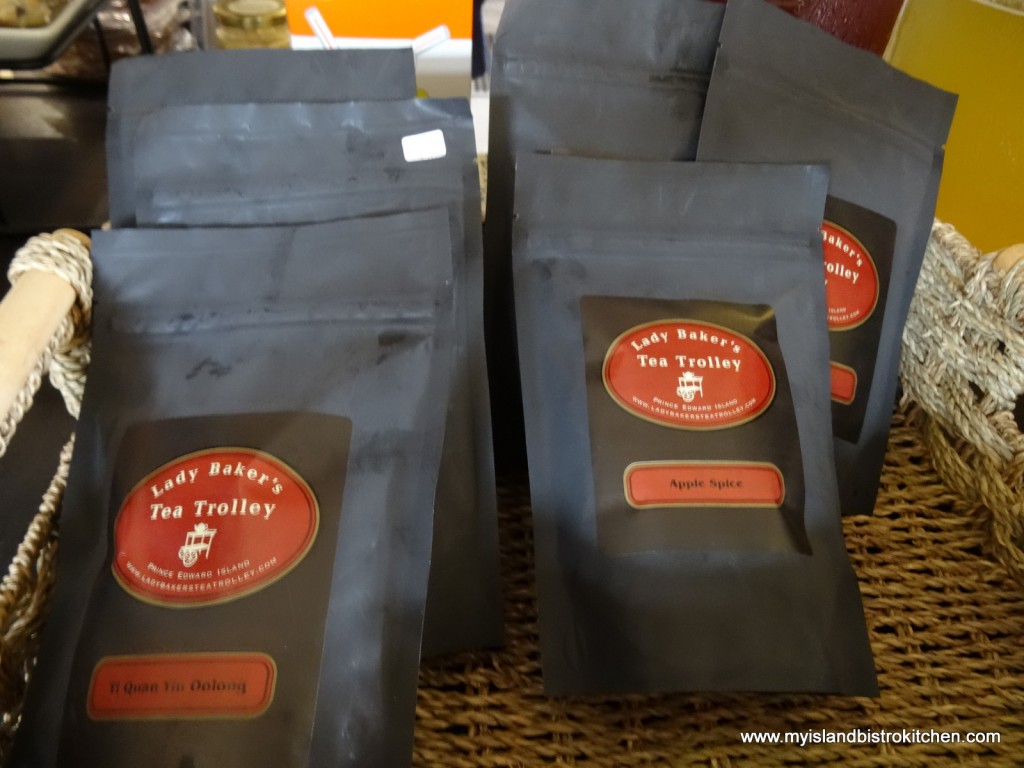 She tells me her most popular blend, which incidentally is her personal favourite, is a black tea she calls the Lady’s Slipper Blend, aptly named after PEI’s official provincial flower. Her pumpkin spice blend enjoys popularity as well with her patrons who favour it for lattes. At the Lady Baker’s Tea Trolley bar at the market, look for specialty tea blends like Abegweit Lullaby to aid sleep and Pink Lady Grey which is an eye-appealing blend featuring Earl Grey tea and pink rose petals. Who knew where a small, modest personal collection of 13 china cups and saucers would lead Katherine!

Since there are several options to brewing tea (e.g., tea bags, loose leaf with infuser or loose tea directly in the tea pot), I asked Katherine for her preference. She says she prefers to brew loose leaf tea in an infuser in the tea pot. Katherine also recommends that the water for the tea first be filtered and then brought to a boil. If brewing green tea, let the water sit until it drops to the proper temperature (85°) before adding and brewing the tea leaves. 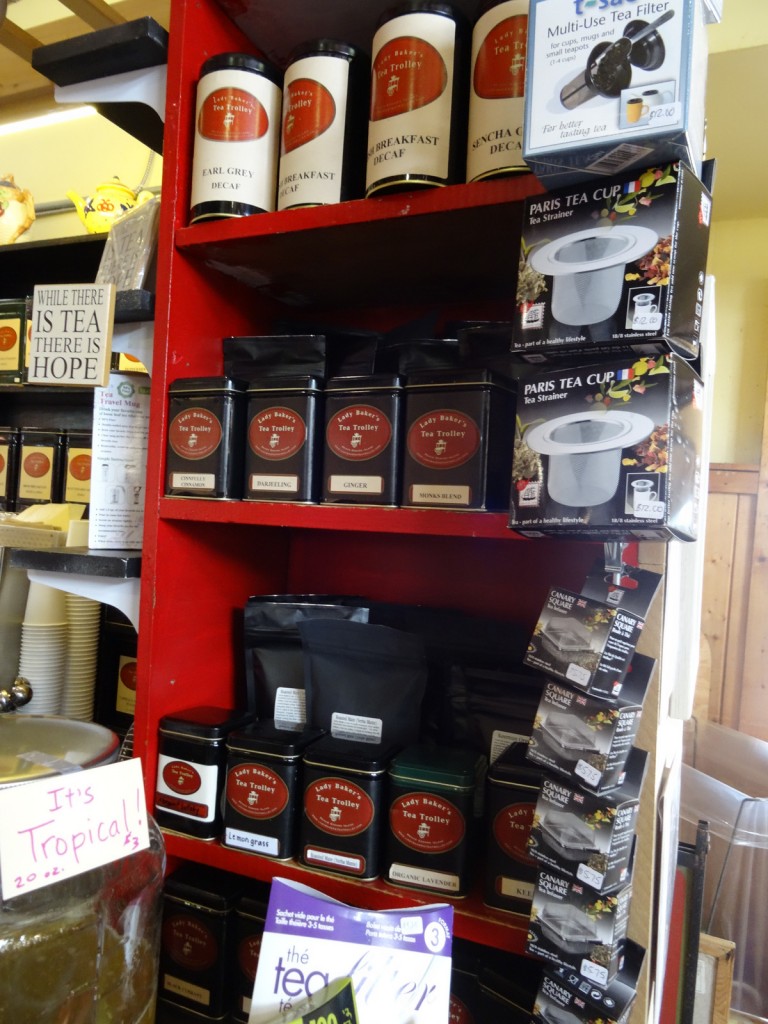 I asked Katherine if she sees any trends emerging in tea drinking. She says she is noticing a renewed popularity in tea drinking with specialty tea shops opening and with the wide variety of tea-brewing equipment and stylish infuser mugs readily available. As well, she notices an increased interest in green teas with information and research on its health benefits becoming more widely known. Additionally, there seems to be a new market for teas – those of high school and college age. In fact, this year Katherine prepared special tea packages to be included in the UPEI student welcome kits. With the university being located just across the street from the farmers’ market, it’s likely some of the students will visit the Lady Baker’s Tea Trolley bar on Saturday mornings. Katherine also sees more tea being used in ways other than as a beverage. For example, Chai and Matcha are now often used in baked goods such as muffins and energy bars. In fact, Katherine sells yummy homemade tea energy bars at her booth. Tea lattes are also becoming very popular — ⅔ cup of a strong tea topped up with ⅓ cup of foamed milk. Iced teas remain popular in the hot summer months when many find the drink hydrating and refreshing. Fruit blends of green teas, such as Katherine’s Island Strawberry blend, have become very popular iced teas. 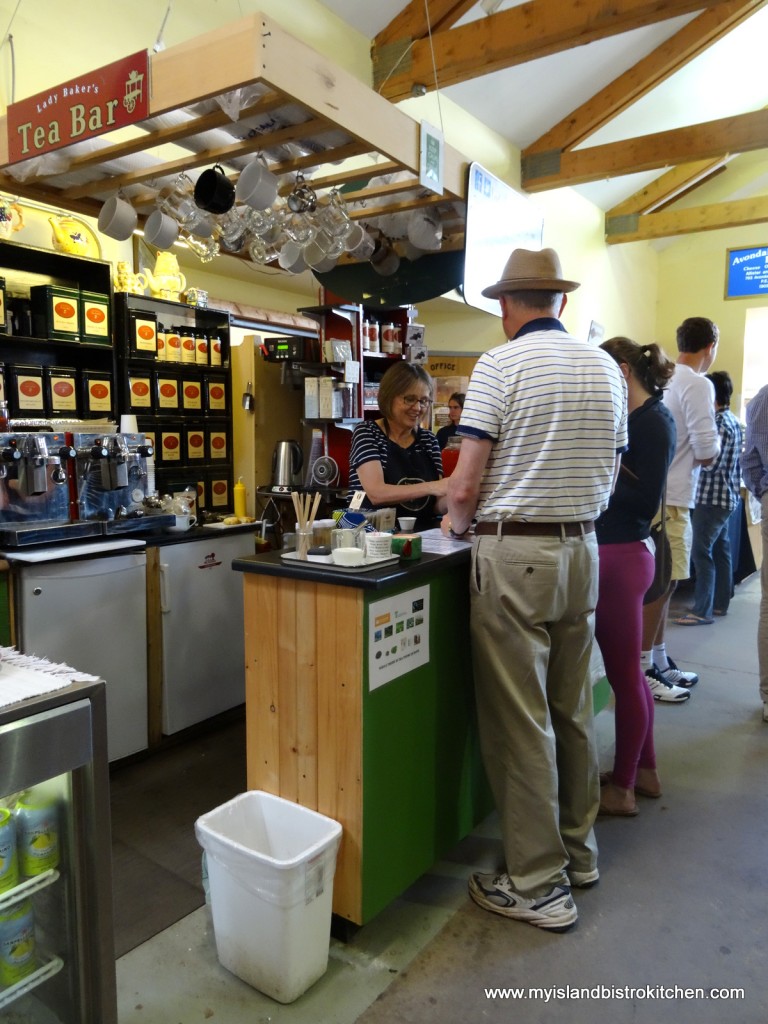 Tea, like coffee, is an enduring popular drink. It’s a beverage that is moving with the times. With its various varieties and blends along with new ways of drinking tea and using it in baking, it’s proof of tradition blending successfully with modern trends.

In addition to being available at the farmers’ market, Lady Baker’s teas are available across PEI at specialty shops and are also found served in many of the Island’s finest restaurants and at select bed and breakfasts. The teas may also be ordered online via the Lady Baker’s Tea Trolley website at http://www.ladybakersteatrolley.com/

I decided to try the Lady’s Slipper tea blend for a late summer afternoon tea. This is a lovely, mellow tea blend with hints of vanilla.  I have some pieces of Lady’s Slipper china so it seemed only fitting to feature them with this blend of tea. 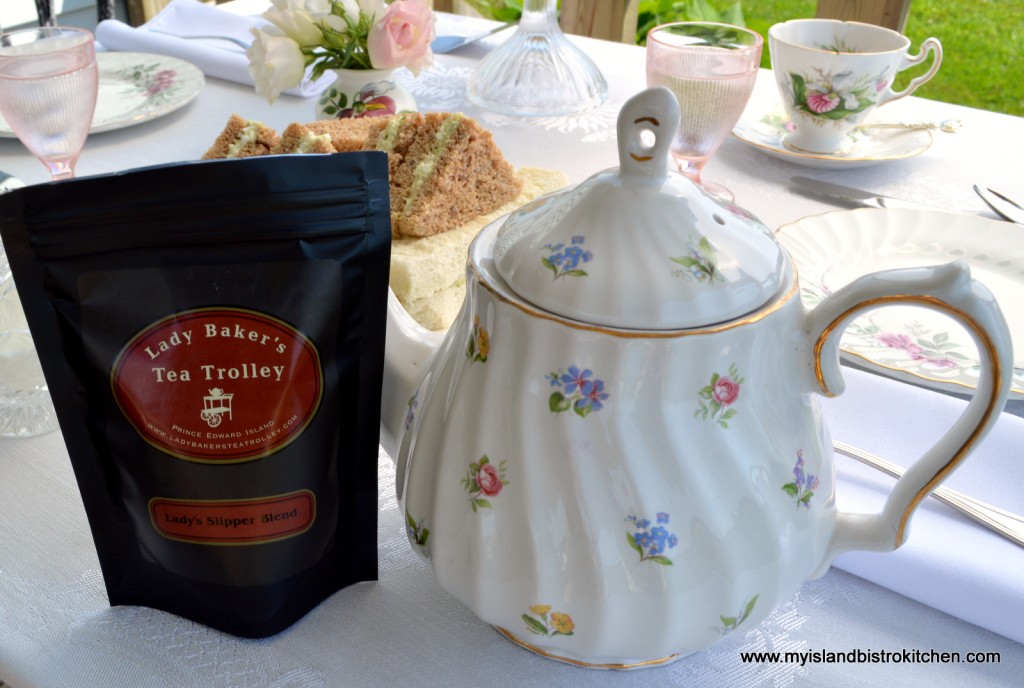 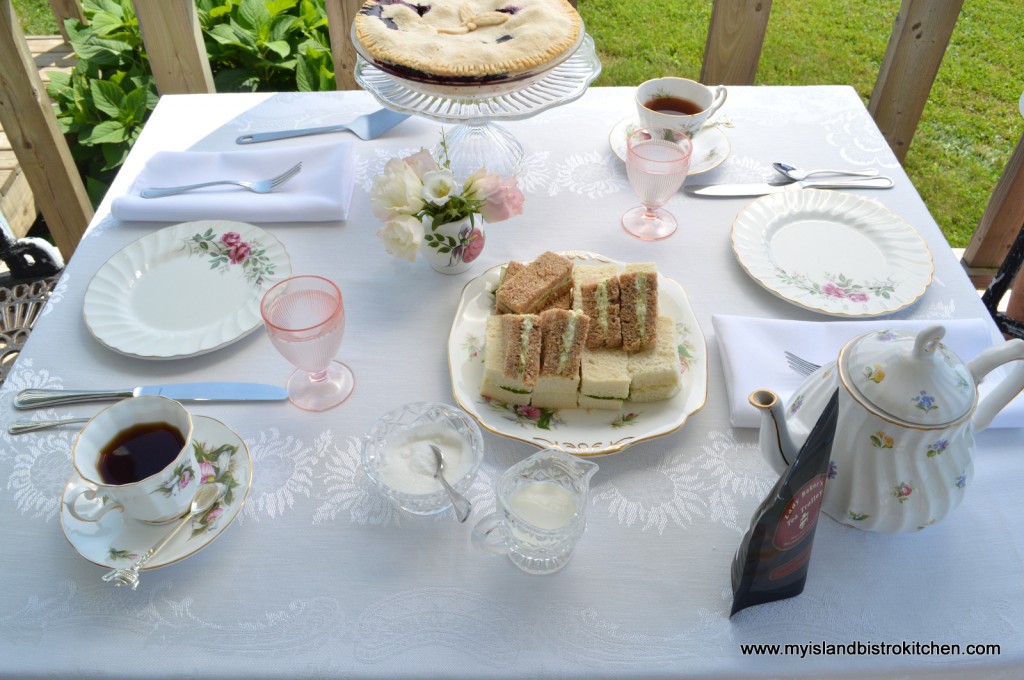 The quintessential tea time sandwiches of egg salad and cucumber were served on my Lady Slipper plate. 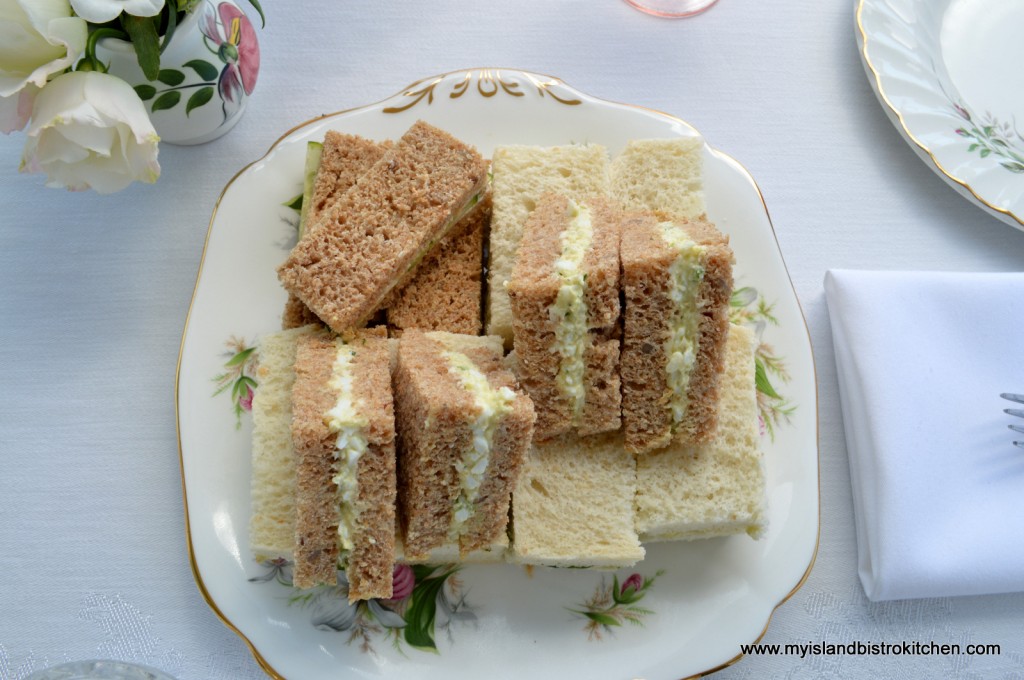 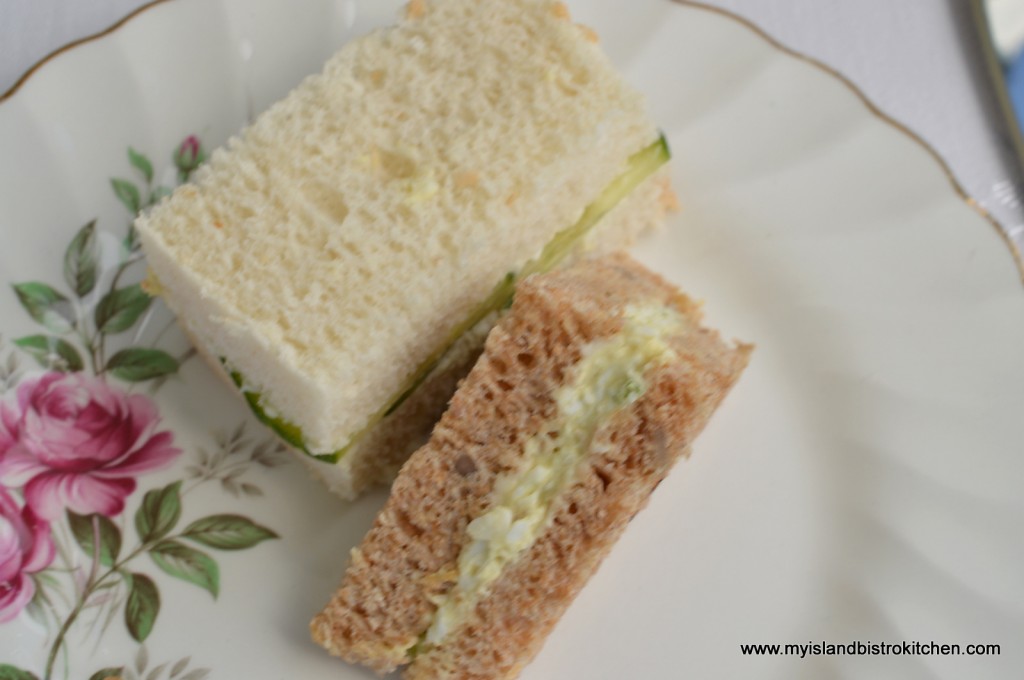 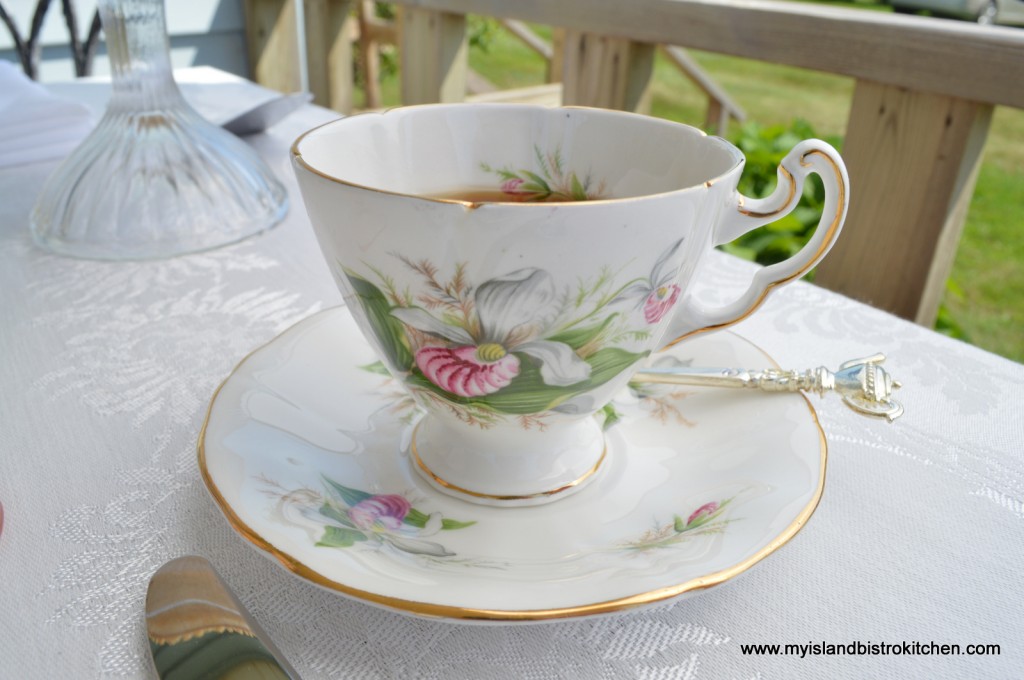 The great thing about afternoon tea is that several different pieces of china can be blended and used with success.  Not everything has to match perfectly on the table.  It just needs to blend. 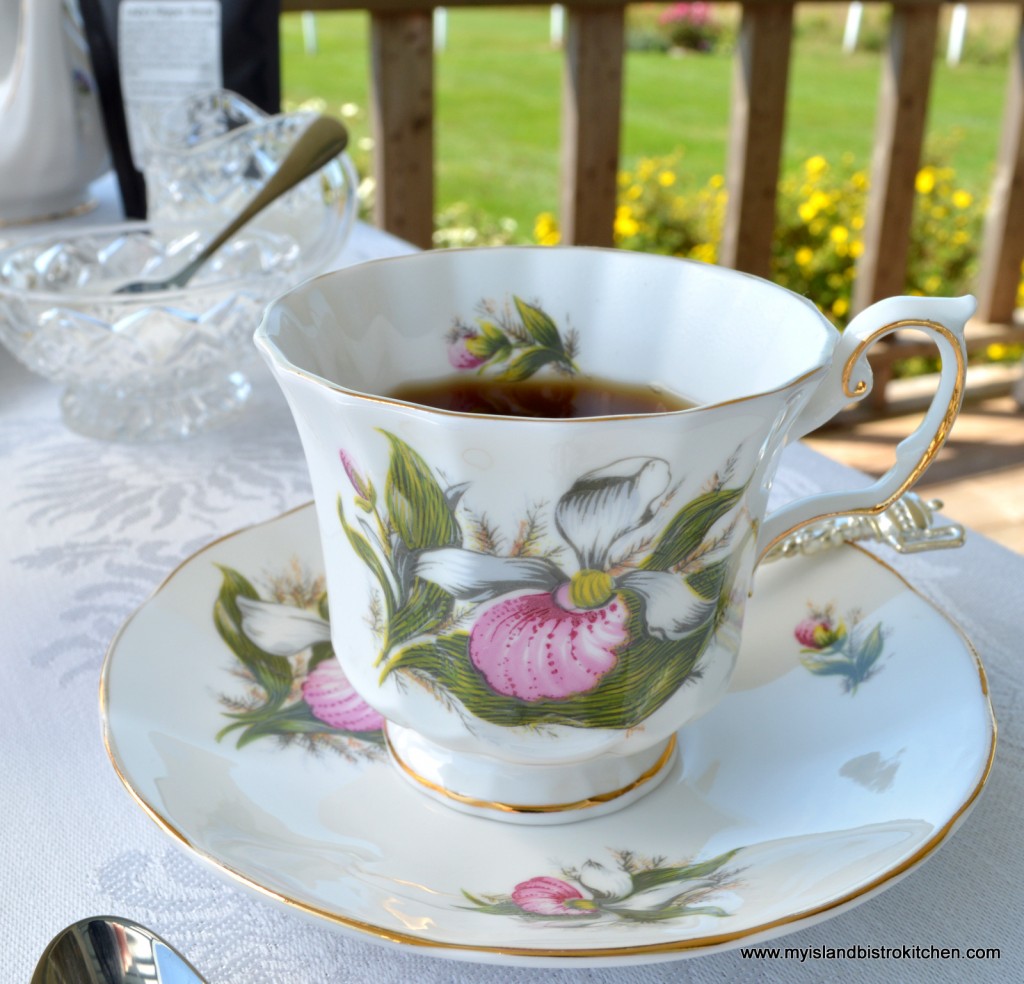 These dainty little pink glasses blend well with the china and are the perfect size for an afternoon tea table. 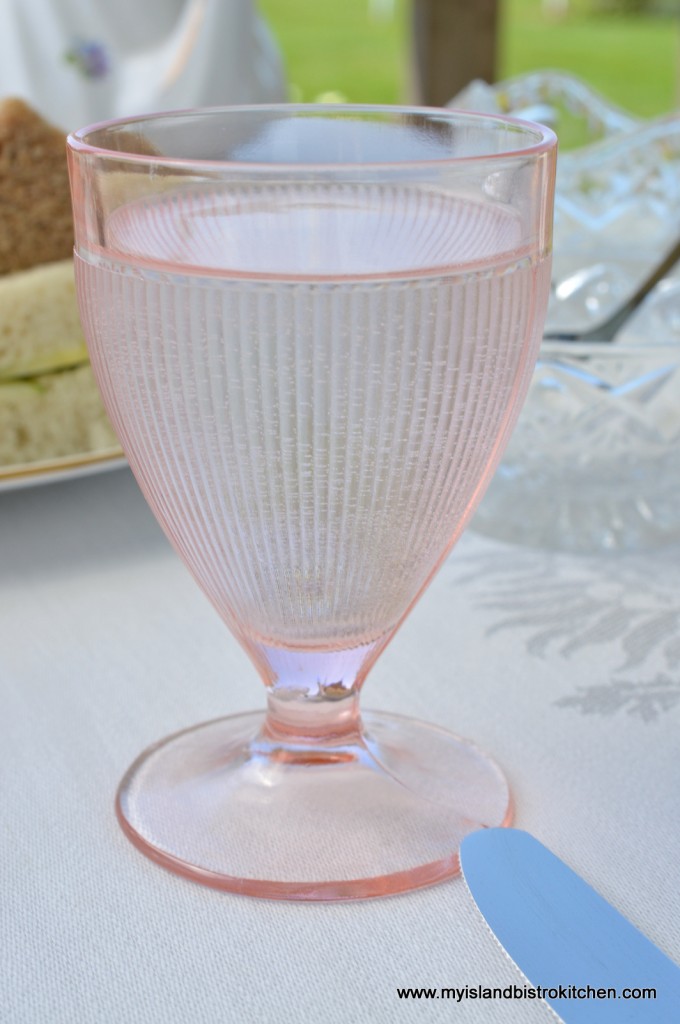 The little pottery Lady’s Slipper vase in the photo below was a gift from an elementary school teacher.  We had gone on an end of year school outing to a local theme park which had a small gift shop in a flying saucer (readers on PEI will likely guess which theme park I’m referring to).  The teacher told us each to pick out something we wanted and it was her gift to us.  Even as a small child, I liked pretty things and opted for a vase instead of a toy!  I won’t tell you how many years ago that was but let’s just say it wasn’t yesterday!  The lovely flowers in the vase are from Island Meadow Farms in York, PEI. 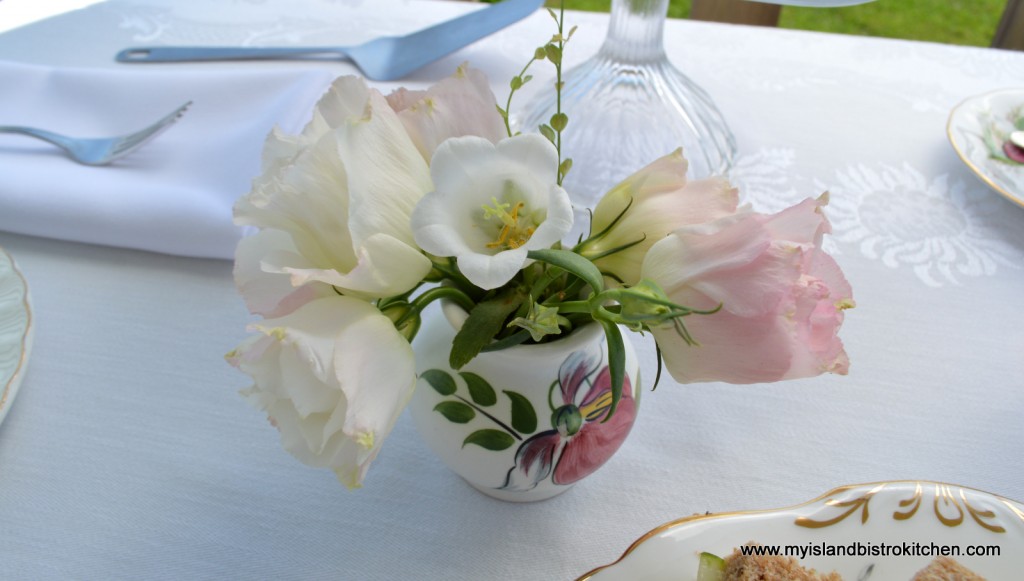 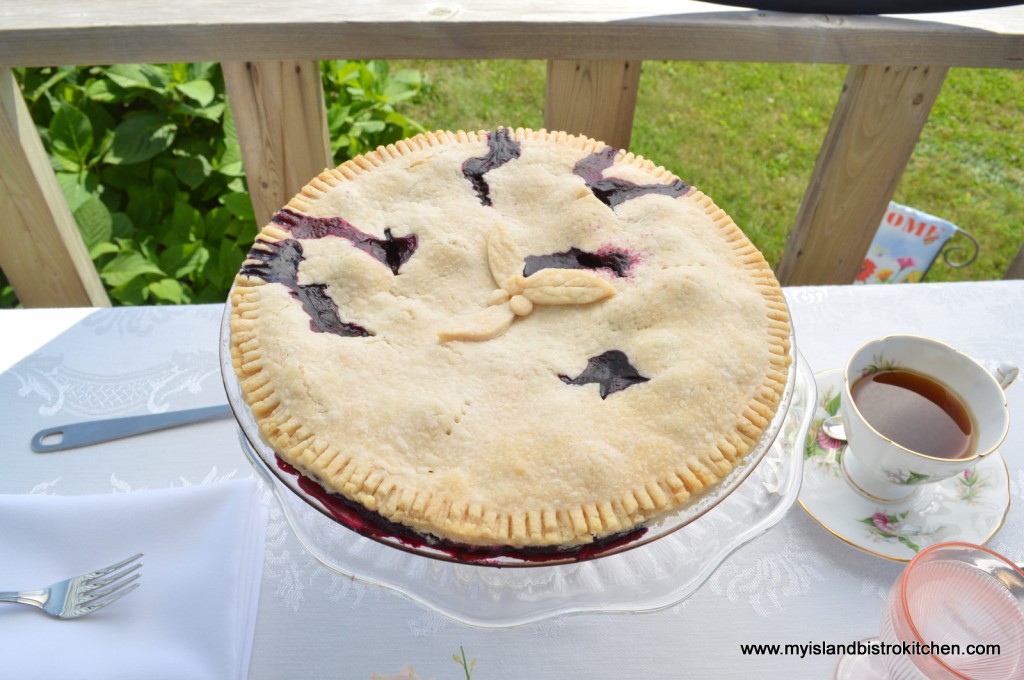 I always say the sign of a true homemade pie is when some of the filling bubbles out 🙂  (Well, that’s my story anyway and I’m sticking to it!) 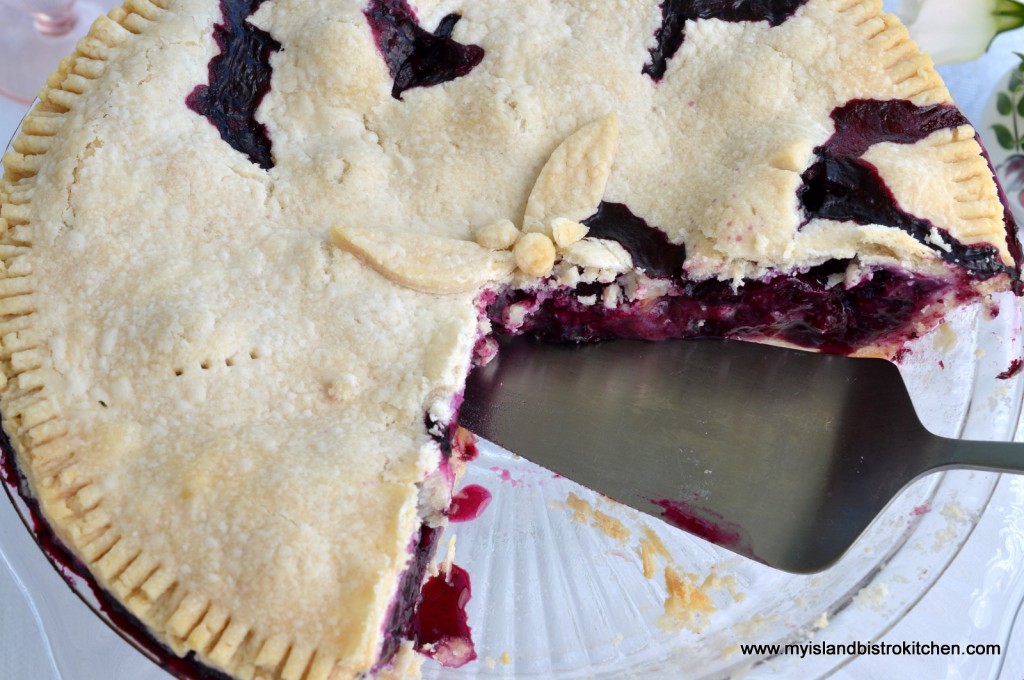 The blueberries for the pie came from Murray’s U-pick in North Tryon.  They grow wonderful high bush blueberries. 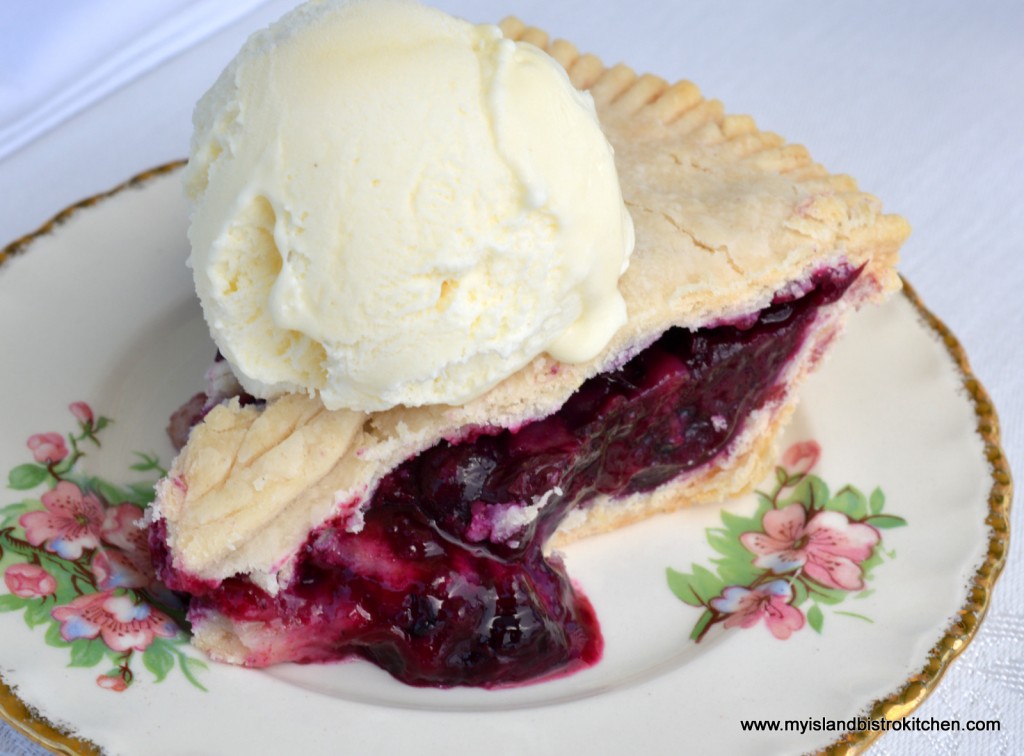 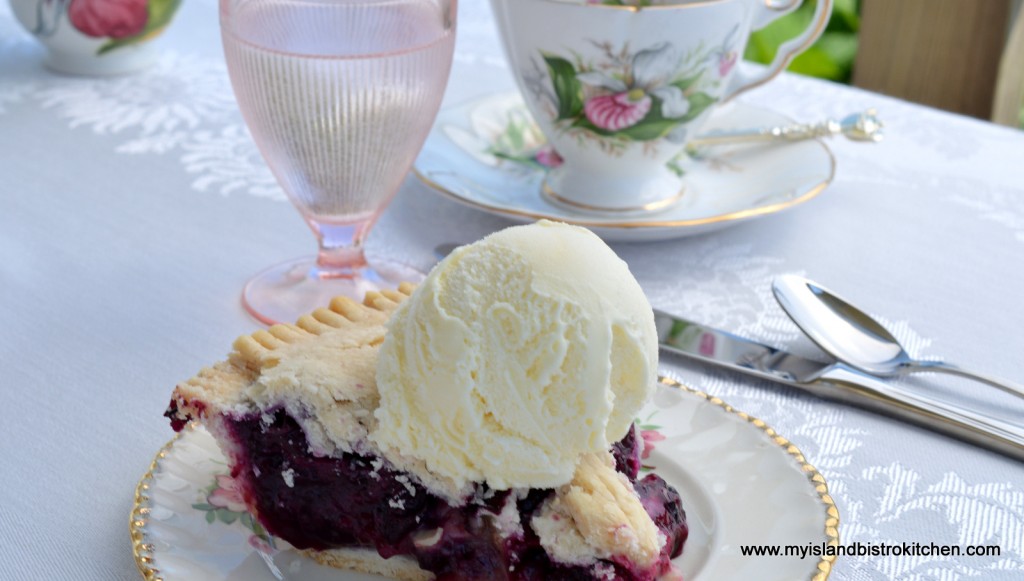 I hope you have enjoyed meeting the lady behind Lady Baker’s Tea Trolley and dropping by for a spot of her Lady’s Slipper tea blend.

I will be joining Sandi at Rose Chintz Cottage for Tea Time Tuesday this week.