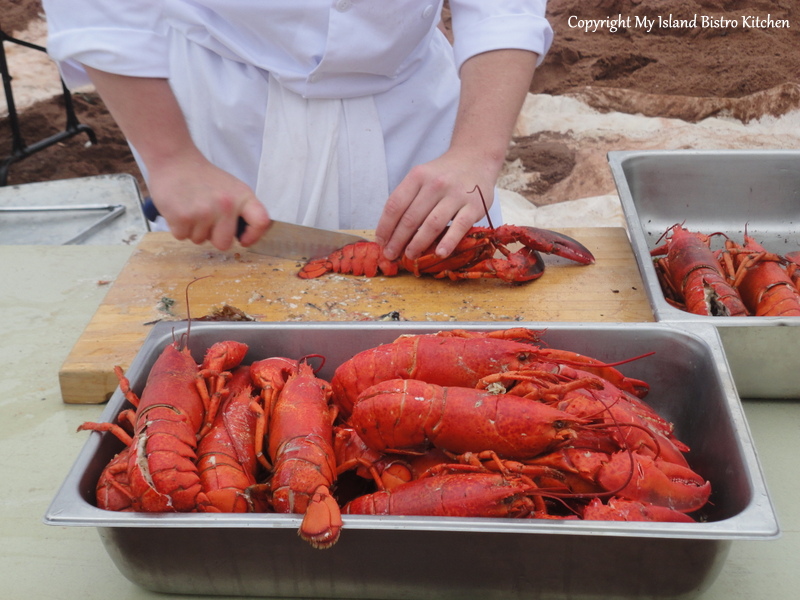 What do you get when you put together a PEI beach, a large tent on that beach, lots of lobster, chowder, salads, and delectable lobster savouries, 200 people, a team of talented chefs, and great PEI musicians?  Why, you get a PEI Lobster Party on the Beach, of course! 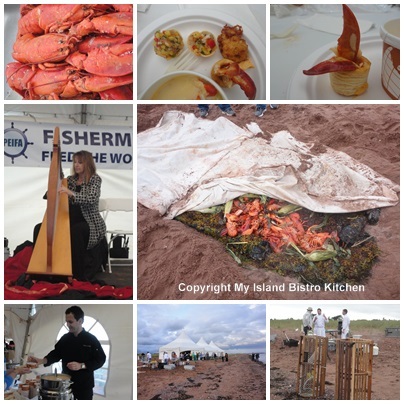 This past Sunday (September 8, 2013), I attended this signature Fall Flavors event in West Point, PEI, where it was hosted by Celebrity Chef Corbin Tomaszeski of Food Network (FN) fame.

You may recognize Chef Corbin as the co-host of FN’s Dinner Party Wars and as one of the chef-hosts on FN’s Restaurant Takeover.  This was the second time that Chef Corbin was the celebrity chef at the PEI Lobster Party on the Beach.  In addition to assisting with event logistics, Chef Corbin was very involved with the menu planning and in leading the lobster team relay event which turned out to be a fun activity….at least for the spectators!

September has become known as “Fall Flavors” month on the Island and PEI is becoming known as a culinary tourism destination, particularly with all the fabulous Fall Flavors events. 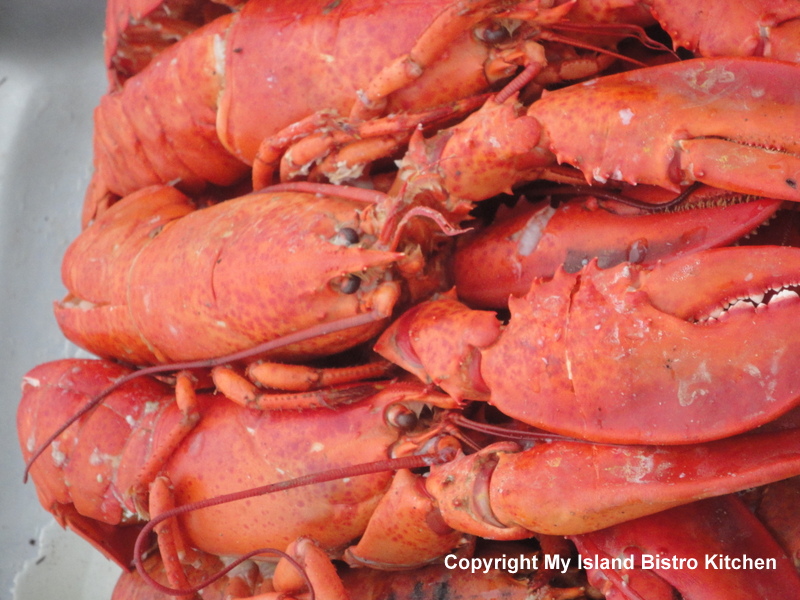 Lobster season is still open in parts of the province and the produce from our land has matured and is ready for harvesting.  What better time and way to celebrate the great foods of the Island than to have a series of culinary events and food festivals. 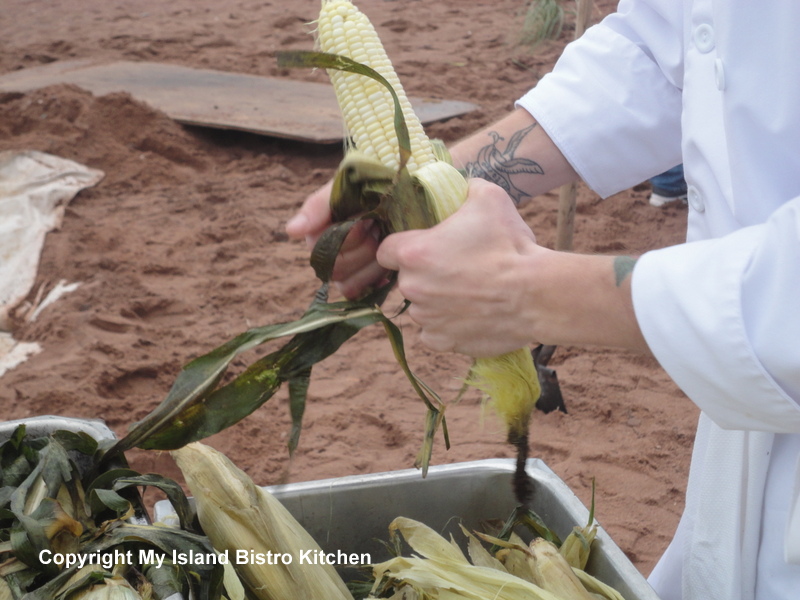 Now in its third year, the Lobster on the Beach Party is held right on the beach at West Point, near O’Leary, in the Western part of the province.  Fall Flavors organizers aim to locate the signature events in communities across the Island so that there is equitable distribution to the extent possible. The lobster fishing season is currently in full swing in the West Point area of PEI and the event was held just up the beach from an active wharf. When asked where the idea for a lobster party on the beach came from, Ian MacPherson, Executive Director of the PEI Fishermen’s Association Ltd., says Tourism PEI has indicated that “a lobster dinner on the beach is one of the most requested activities that tourists request when coming to PEI”. 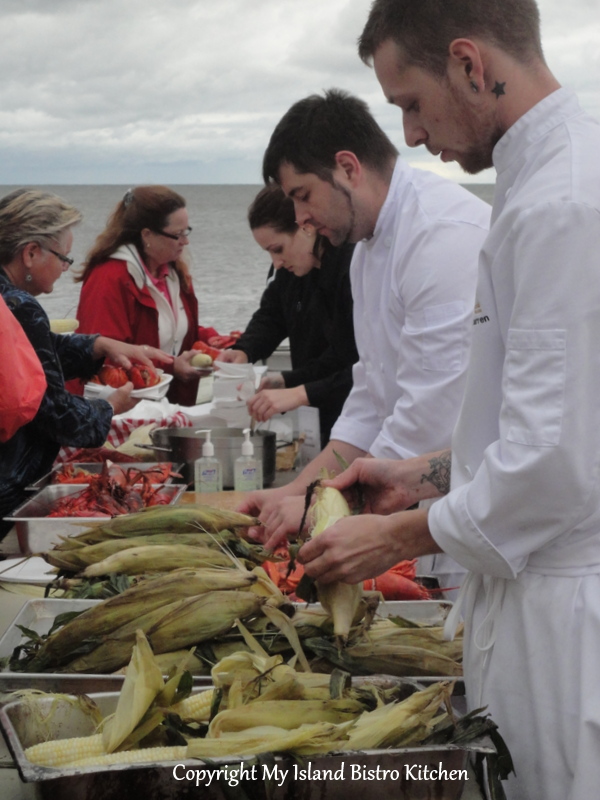 On Sunday, around mid-day, the skies opened and literally drenched the Island with rain.  Winds were blowing at a good clip – 50-60kpm.  As I was leaving on my 1½ hour drive to West Point, the weather conditions were less than ideal (an understatement) for a beach party.  However, the event was going ahead rain or shine so off I went donned in my rain suit and duckies.  I arrived in West Point around 4:00pm just as the event was getting underway.  By this time, the rain had eased off to a steady, more gentle rain.

A short jaunt through a “muddy” walking path brought me to the beach where I could see the top of a huge white tent, a mobile kitchen, and another trailer and truck. 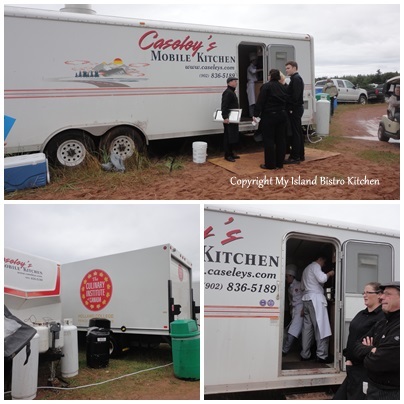 Down on to the beach, I could see chefs, barefoot, working around some portable cookers and a couple of tarp-covered cooking pits in the sand.  The first person I met was Chef Corbin who was busy steaming mussels in white wine.  Oh, yes, our Island mussels are some good! 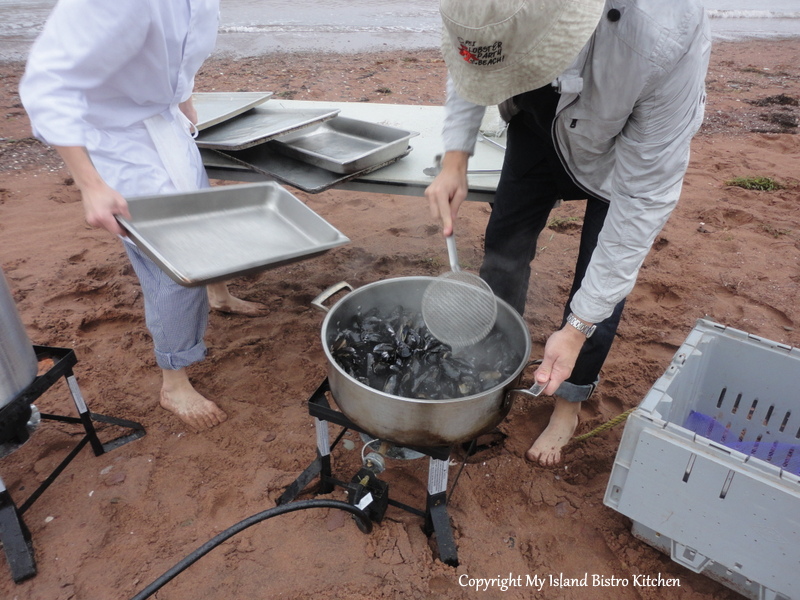 So, to set the stage – the large tent actually was right on the beach, anchored in the sand, just a very few meters from the water. 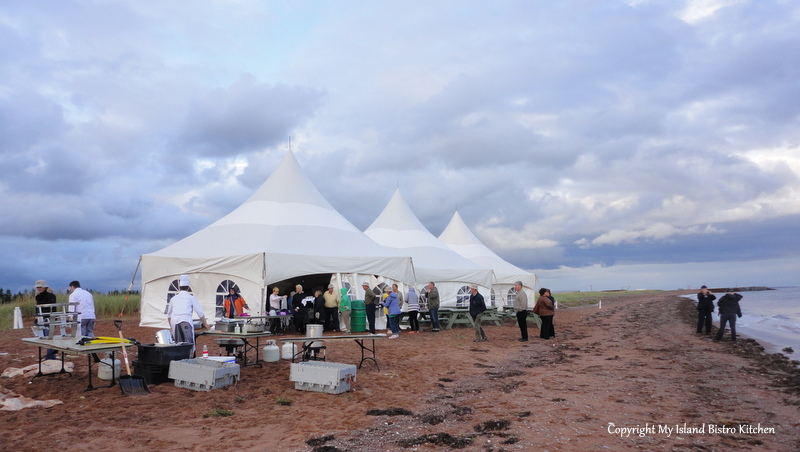 There was no nearby building, no running water right on site, and no electricity.  Can you imagine having 200 people over for dinner under those conditions?  The logistics of producing a sold-out event for 200 people in such a location are many (and these were all in addition to contending with strong winds and heavy, pelting rain all day).  Here are some of them:

–                      an additional 50 pounds of lobster meat was used in a multitude of side dishes including lobster chowder, lobster bacon fritters, lobster potato salad, etc.

Carrying out an event like this means attention to detail and careful meticulous planning has to happen – it’s not like an event in a large banquet hall or hotel where the chefs and service staff have everything they need at their fingertips.  For this, everything (food, water, equipment, generators, etc.) has to be transported to the beach.

One of the most fascinating activities proved to be the cooking of the lobster and corn in a sandpit on the beach.  From the number of times I heard him explain it, I am sure Chef Andrew Nicholson from the Culinary Institute of Canada could recite, in his sleep, the process he used for cooking the lobster as well as the corn in the husks!

Two pits, each about 5-6” deep, were dug in the sand and lined with river rock.  Firewood was added and a fire in the pit burned for 4-5 hours until it burned itself out.  This heated the rocks which were then used as the heat source to cook the lobster and corn.  A layer of seaweed was added to the top of the rocks and charred wood remains.  A layer of lobsters was laid out in the pit followed by a layer of corn.  Several eggs were placed on top of the corn.  Yes, the eggs were used to determine when the lobster was cooked!  This gives a whole new meaning to the concept of “egg timer”.  As Chef Andrew says, “the eggs never lie”!  Using this method, the chef can periodically remove an egg from just under the tarp without disturbing the lobster cooking below. Once an egg tests hard-cooked, the lobster is done.

The entire pit was covered with a tarp and sand piled over the tarp edges to seal in all the heat and make it quite sauna-like inside for the lobster and corn to slowly cook in the steam. 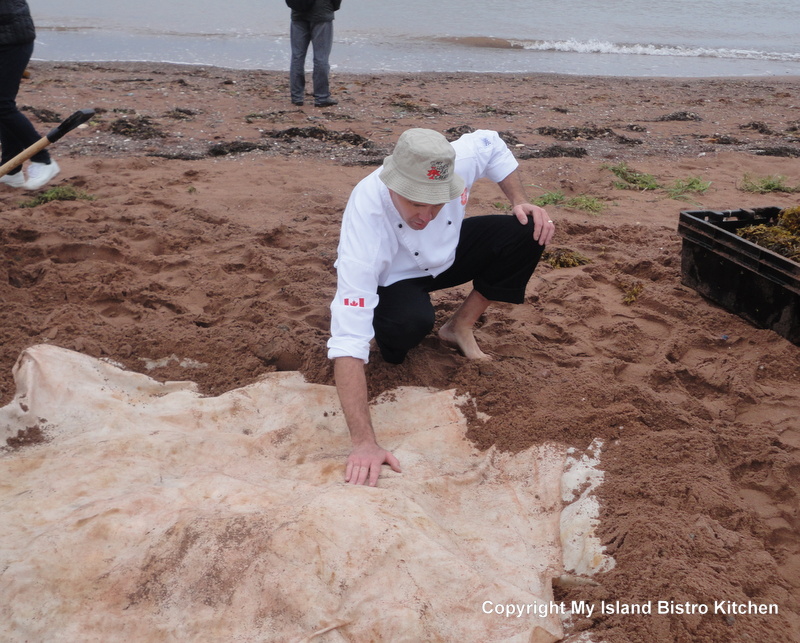 It takes about 45-60 minutes for the lobster to cook under ideal conditions.

Says Chef Andrew, the products cooked this way have some “wicked good flavour” happening.  This was, arguably, the best tasting lobster I have ever had!

Chef Andrew is right – there are subtle hints of the smoked firewood and the taste of the sea from the seaweed bed but not so strong that it detracts from the pure lobster flavour. 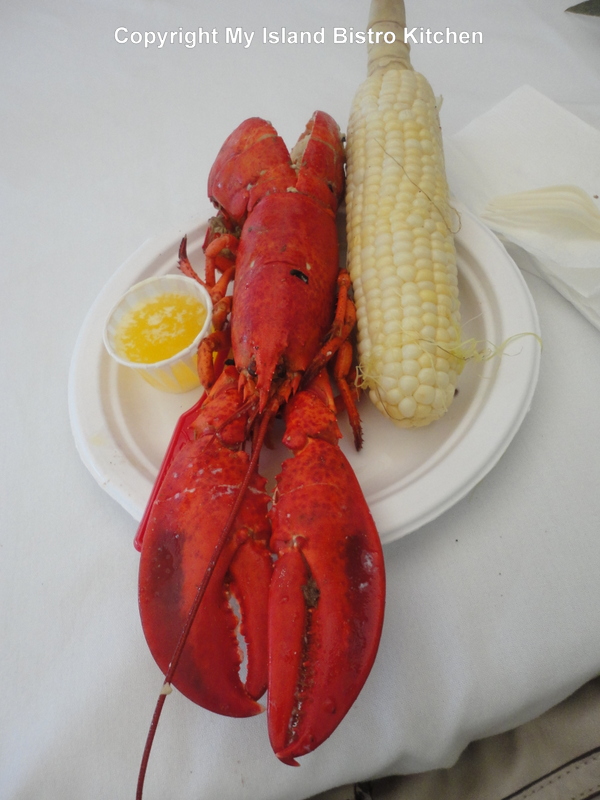 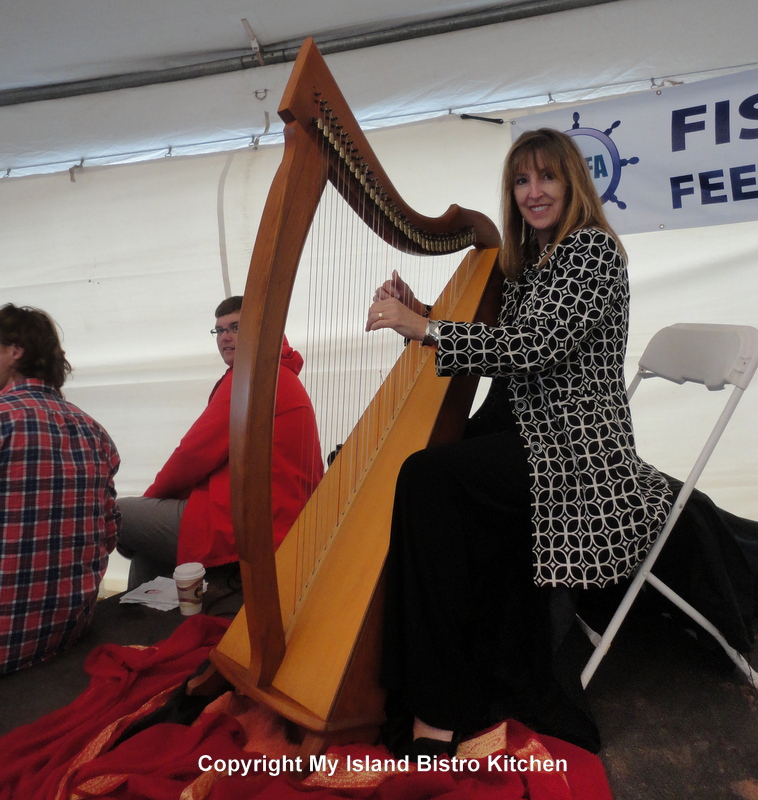 And, Island fiddler and fisherman JJ Chiasson closed out the last hour of the event. 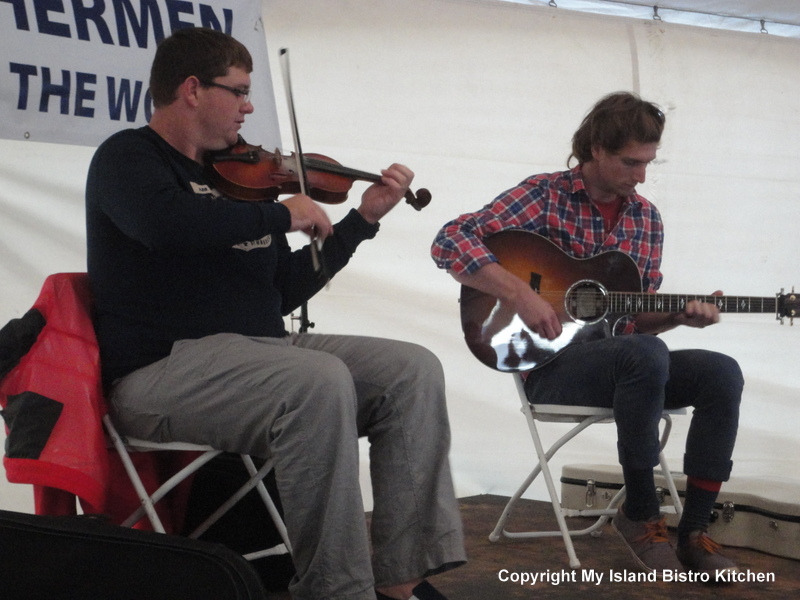 Anyone wanting to experience Island hospitality, fabulous PEI lobster prepared in many different ways, and a lobster party on the beach with great music, then this was the event to attend.  The rain stopped in time for the party and, despite the soggy sand and muddy trek through the woods to the beach, no one seemed to mind the damp, dreary day.  Many (including the chefs) who weren’t sporting “high fashion” duckies or rubber boots, simply got into the party mood by abandoning their footwear and going barefoot.  After all, this was a party right on the beach! 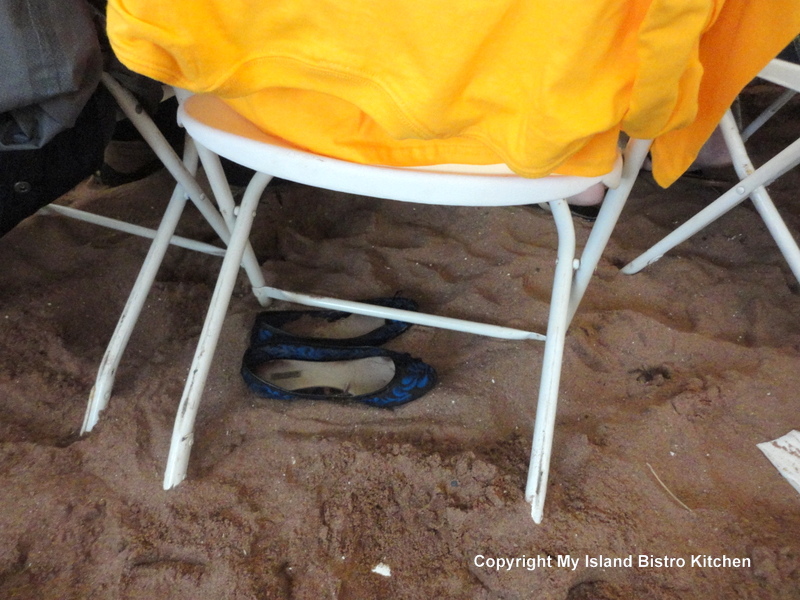 Chef Corbin and Chef Andrew even ventured into the water to set the lobster trap for the lobster relay.  This must fall under the category of “other related duties”, chefs!

When asked what this event means to the lobster industry on PEI, Ian MacPherson says, “ It is a great opportunity for people to connect with the fishers and understand the hard work and skill it takes to catch lobster.  Financial returns have been very low to the harvesters over the past few years so it is a good way for people to understand how the supply chain works as consumer costs still tend to be high.  We get a lot of questions on sustainability and conservation so, again, this is a great way to respond to these questions.  As you know , most people like to know where their food comes from and who supplies it.  Being directly involved with promotion is new for the harvesters but most agree it is an area we need to be more involved in.”

Tickets for this event were $75. per person.  Those traveling from the direction of Charlottetown and Summerside could board a bus for a nominal fee in lieu of driving themselves to West Point.  Individuals needing a drive between the parking area and the beach could hop onboard one of the golf carts.  Organizers thought of everything! 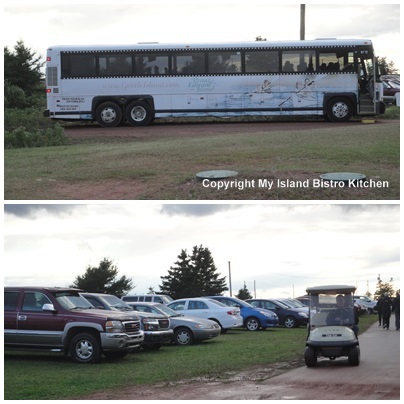 Whether you are an Islander, or planning a trip to PEI in September, I highly recommend you check the Fall Flavors website for event and ticket information to any of a number of great culinary events.  Be sure to book your tickets early as the signature events, such as the popular Lobster on the Beach Party, sell out – that’s a testament to their popularity and quality.

Photo Gallery of the Sights of Lobster Party on the Beach at West Point, PEI:

Hors d’oeuvres, lobster chowder, lobster in the shell and fresh PEI peaches and cream corn steamed in the husk. 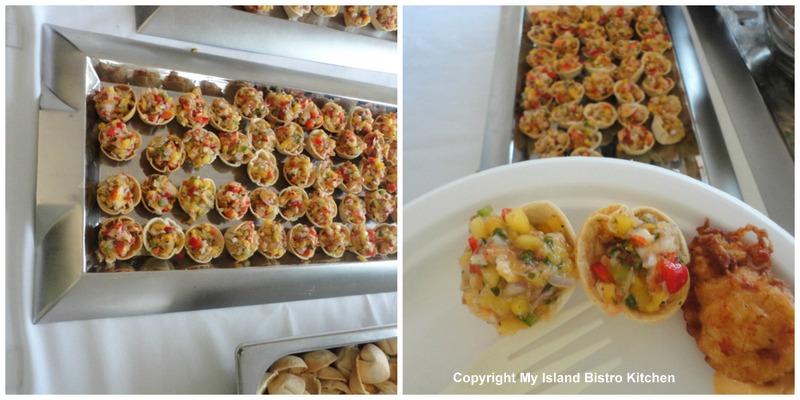 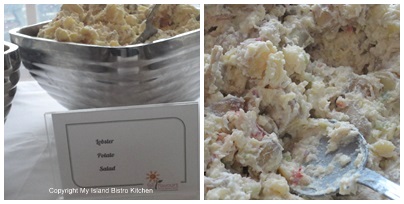 Even lobster potato salad was on the menu! 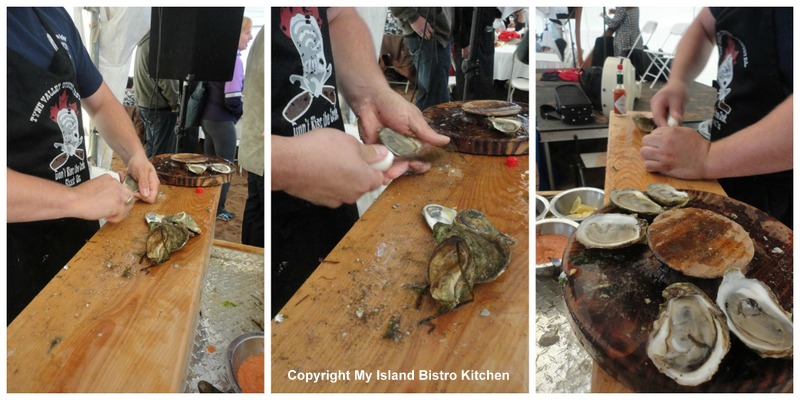 PEI Oysters are always a hit with foodies! 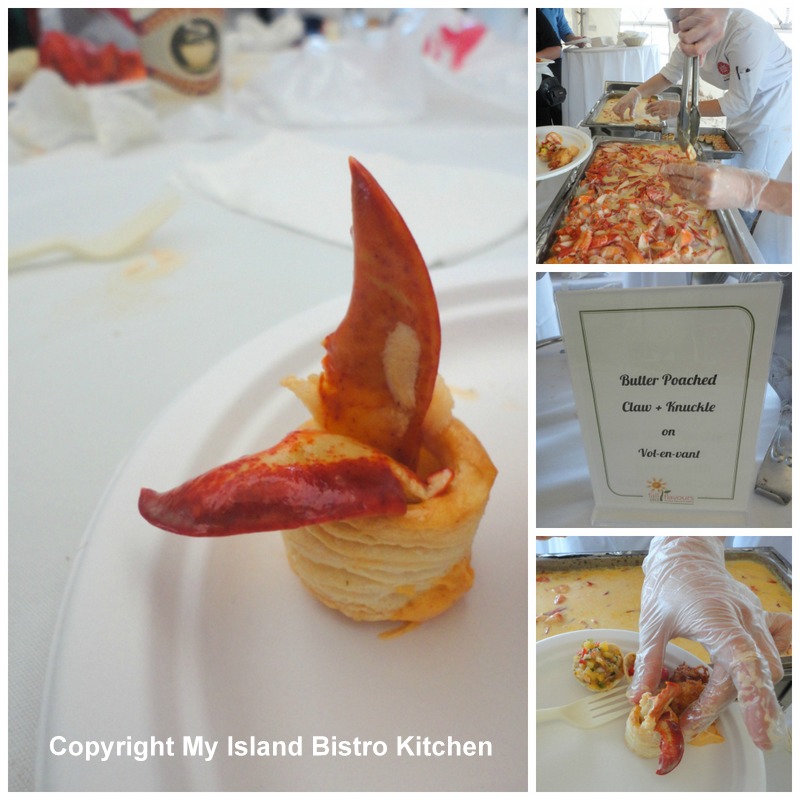 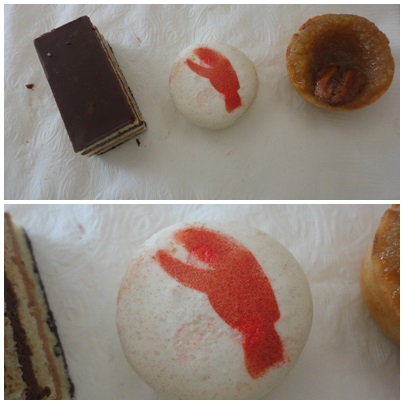 Dinner with a water view: 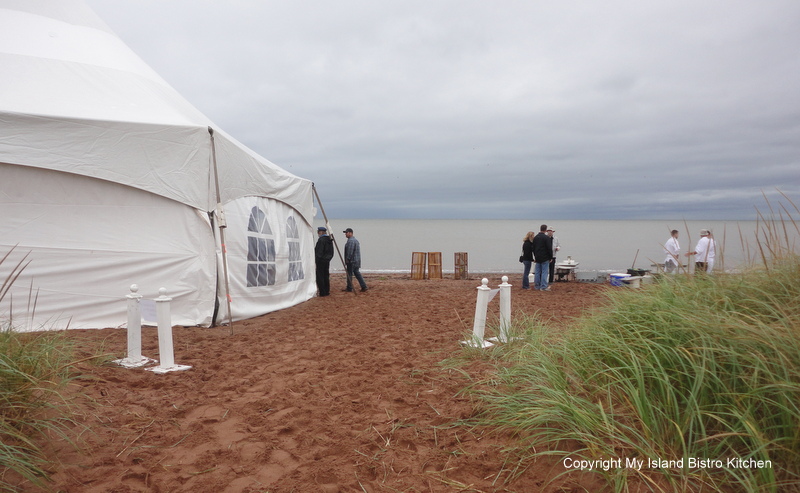 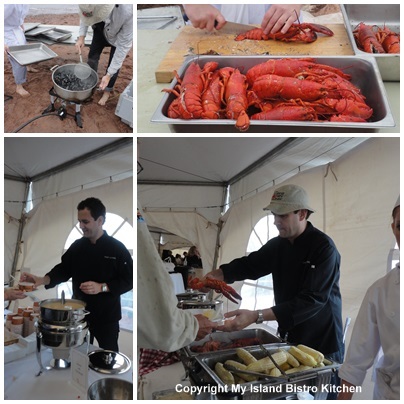