The craft beer brewing industry continues to grow thanks to consumers with a thirst for traditional hand-crafted beer and a demand for unique locally-made artisanal products. While not a huge industry on PEI, craft breweries are starting to emerge….and with remarkable success.  As Upstreet Craft Brewing in Charlottetown, PEI, celebrates its first birthday, I thought it was time I paid a visit so I recently journeyed “upstreet” to meet Joey Seaman, one of the owners, for a tour and chat about the brewery.

I began by asking Joey where the name “Upstreet” came from.  He says that upstreet, means “anywhere but where you are” and, colloquially, if you are downtown and someone asks where you’re going, chances are you might say “I’m heading up the street” and, since the location of the brewery is ‘just up the street’ from downtown Charlottetown, it became the name of the brewery.

Upstreet Craft Brewing began operation in June 2015 when three friends, who were long-time hobby home beer brewers, decided to take the leap, leave the security of their careers, and co-found a craft brewery in their hometown.  This trio – Joey Seaman, Mike Hogan, and Mitch Cobb — have turned their hobby and passion into a growing success story.

The three partners are very hands-on at the brewery.  Mike is the beer engineer who brews all the beer while Mitch looks after general management and operations and Joey takes care of sales.

The brewery currently has 19 employees and is a beehive of activity.

Craft beer is brewed in the traditional way in small batches using 4 main ingredients – barley, hops, yeast, and water. One of the trademarks of a craft brewery is that it offers the opportunity to experiment with ingredients and flavors because small batches of the beer can be produced. This is in contrast to industry giants that produce huge quantities of the same beers year in and year out.  Craft breweries, on the other hand, are small enough that they can keep experimenting and come up with fresh new flavours that keeps customers returning.  They can also produce small quantities of seasonal beers that are likely only to be purchased during a short period. Upstreet is currently brewing six batches of beer, four times a week. This translates into about 10,000 litres of beer a week.  The brewery has built a strong local customer base that has meant Upstreet is presently at maximum capacity. To double their capacity and meet growing demand, the brewery just recently added two more fermentation tanks and they still can’t fully meet demand. In fact, at the time of writing, they have a wait list of 15 restaurants/bars wanting to sell their beer.

In addition, the brewery has brewed over 10 different beers, including seasonal brews, in the first year of operation.  This includes specialty flavors like Imperial Pumpkin Ale brewed last autumn and Vanilla Cranberry Stout during the Christmas holiday season.

You won’t find canned beer at Upstreet. Instead, they use tall slim brown bottles that give a classic feel to the Upstreet beer experience. 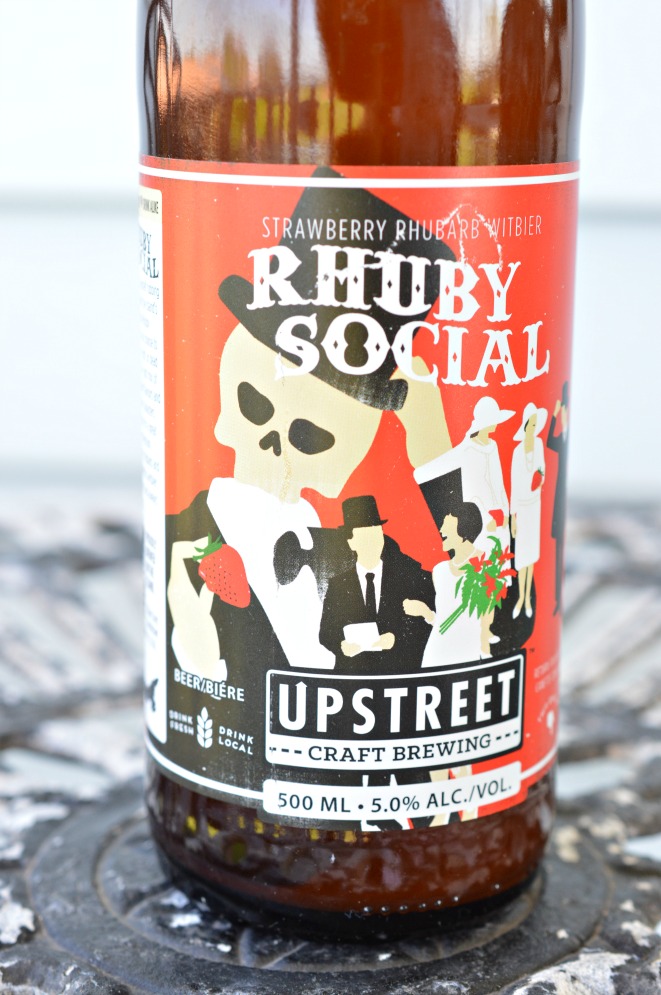 Each bottle is labeled with an eye-catching unique label that contains information to educate the consumer on the beer product and experience.  So, look for a beer profile on each bottle that will tell you the level of hoppiness and a description of the color and flavour. 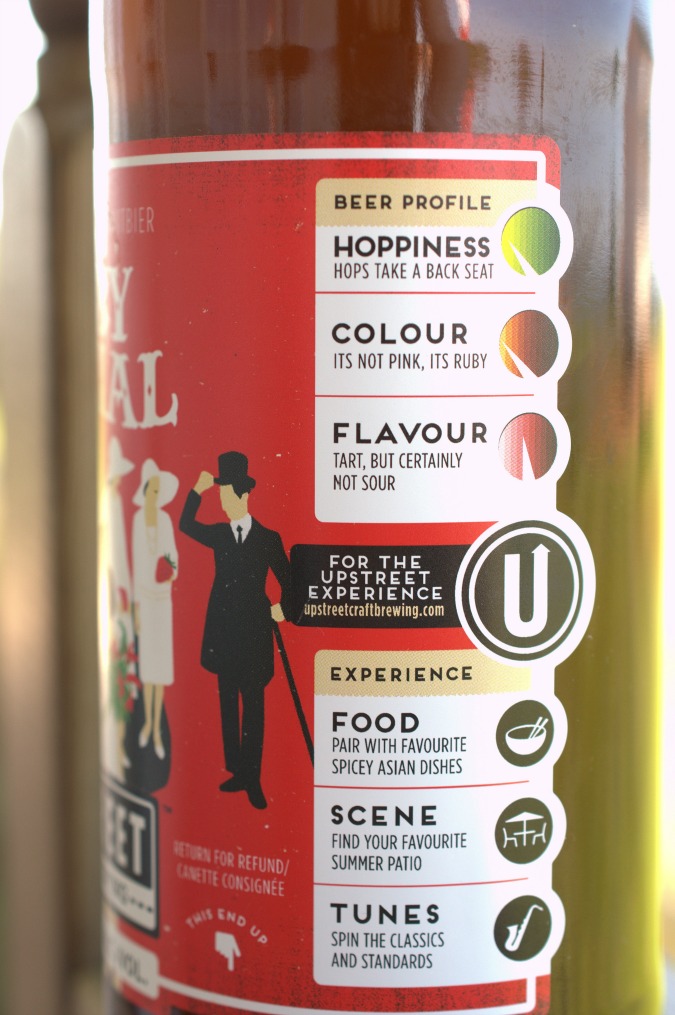 Check under each bottle cap for a unique PEI colloquial saying –  great conversation pieces! The owners solicited submissions from the public of typical PEI sayings and received over 2000 suggestions in 48 hours – yes, we Islanders have lots of colloquial sayings! 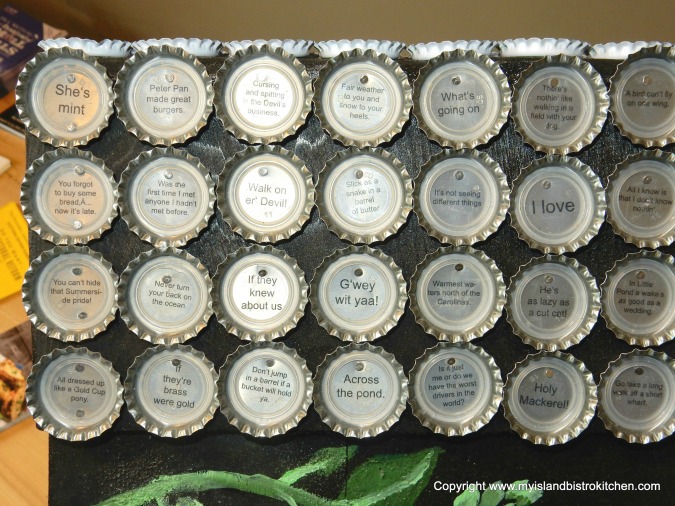 As many readers will know, a growing sector of the alcoholic beverage industry is pairing foods with the different beverages. Many will be aware of food and wine pairings but there is also a burgeoning trend to pair craft beer with good food.  The label on each bottle of Upstreet beer will also give a good food pairing suggestion, the type of event in which it might be enjoyed and even a suggestion for best listening tunes by which to enjoy the beer. For example:

In addition to their bottled beers, the Brewery also sells growlers at the brewery. And, of course, they also sell and deliver kegs of beer to restaurants and bars and there are over 30 venues in Prince Edward Island and Nova Scotia currently carrying the Upstreet products.

Joey says that, while their patrons come from all walks of life, he finds the largest growing market for craft beer is the female population who tend to like the dark beers and those that would be classed as bold, hoppy beers.  New and creative flavours of beer may be contributors to that trend.

The brewery is not only a production facility. It, like many craft breweries, has a taproom onsite. The taproom, which can accommodate about 90 people, is a mix of industrial and eclectic décor. Be sure to check out the bar counter repurposed from an old elm tree that had to be taken down in the city.

While Upstreet does not have a full-fledged restaurant per se on site, it does have a chef as part of the team and the taproom does offer snack foods and tapas/small plates with a menu that changes according to season. However, don’t look for table service at Upstreet – in keeping with the casual atmosphere, you simply go to the bar to place both your drink and food order.

Upstreet Craft Brewing is very community minded. The brewery offers its taproom as a community space for locals to come and hang out. In fact, several groups meet at the brewery to socialize, including a group of local knitters! The brewery also hosts adult coloring nights and other community events and there is always a good selection of board games for patrons to enjoy over a glass of cold beer. In addition, the brewery offers a venue for local musicians to share their musical talents with patrons. The brewery is also a strong supporter of the local arts, music, and culture scene and, in fact, a percentage from the sale of every bottle of Do-Good-er beer goes to a “do good” fund to support local arts and culture.

The brewery, located at 41 Allen Street in Charlottetown, PEI, is open 7 days a week, noon to midnight.

As is my tradition when I visit a local producer, I develop a recipe or two using their product.