Today is National Tartan Day.  Tartan Day is celebrated each year on April 6th which coincides with the signing of the Scottish Declaration of Independence — the Declaration of Arbroath — in 1320.  It is a day of observance to recognize and celebrate the Scottish heritage and the contributions of the Scots and their descendents to Canada’s history, development, and culture.  In Canada, the day first originated in Nova Scotia in the late 1980s and then later spread across the country culminating with it being proclaimed, on October 21, 2010, by the Minister of Canadian Heritage, as an observance day all across Canada.  I understand it is also celebrated in several other countries around the world.  Tartans are, of course, synonymous with Scottish descendents.  Tartan Day has a particular significance on Prince Edward Island because, according to the PEI Government website, people of Scottish descent make up the largest ethnic group in the Province[1].

The colors of the tartan each represent some aspect of the Island:  The overall reddish-brown color signifies the redness of the Island soil; the green portrays the grass and trees; the white represents the whitecaps of the waves that lap our shores, and the yellow is said to stand for the sun[2].  If you have ever had the opportunity to fly in over PEI on a beautiful, clear, sunny day in spring, the landscape of the Island does look like a tartan checkerboard with green fields and trees and the red land.  The traditional PEI tartan is a very good depiction of the colors of the Island. 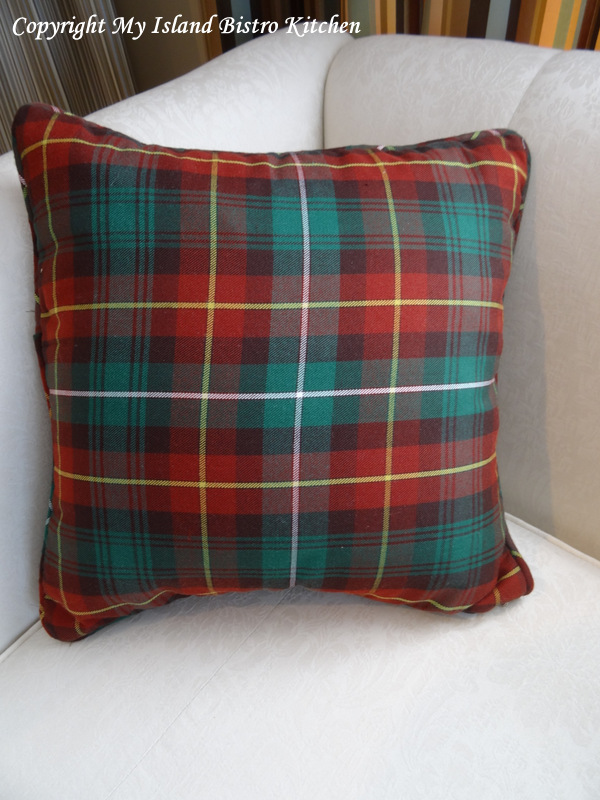 In addition, the Island also has an official dress tartan.

This tartan was designed by Ben Taylor, Scott MacAulay, Barbara Brown, and John (Jock) Hopkirk.  Unveiled on June 25, 1992, the dress tartan is a different design from the official provincial tartan although it maintains the overall reddish-green color scheme.[3]    The PEI dress tartan substitutes white blocks for one of the darker colors in the traditional tartan.[4]

I recently spoke with Barbara (Brown) Yorke, one of the designers of the PEI dress tartan, to find out when the dress tartan would be worn.  Ms. Yorke tells me that the dress tartan is often worn by highland dancers who favor the lighter color (than traditional tartans which tend to be darker) because the kilts, with matching socks, made of the lighter tartan makes the dark shoes of the dancers stand out.

The following photo shows the comparison of the traditional and dress Prince Edward Island tartans with the dress tartan (on the left-hand side of the photo) being much lighter in color. 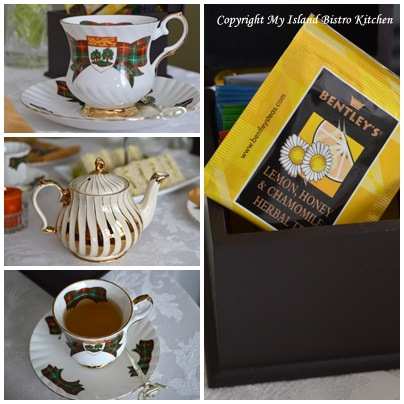 On my menu for Tartan Day are egg salad sandwiches with dill, along with fruit cake, coconut roll dates, and Scottish oatcakes, of course, to represent my Scottish heritage. 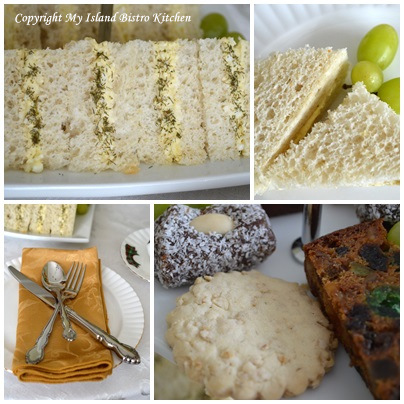 I am using my small ivory and gold-colored teapot this afternoon since it fits in with the rich tones of the Island tartan. 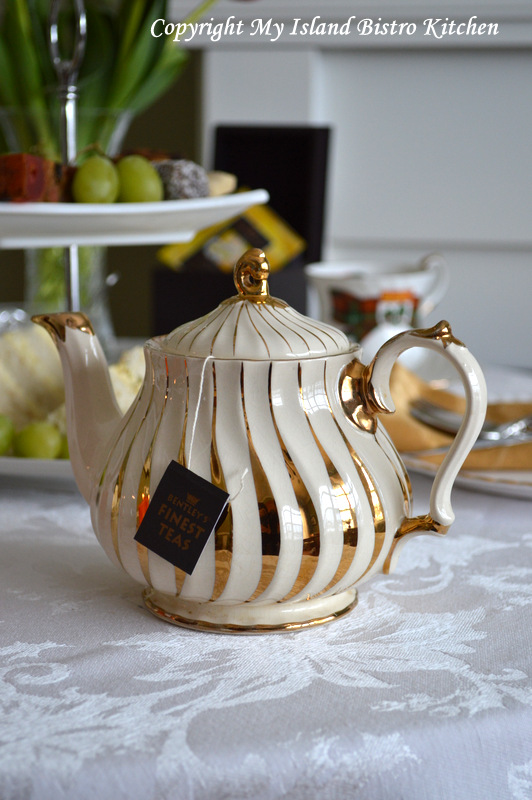 Let’s take a closer look at the elements on the tea table and the significance they bring to a Tartan Day afternoon tea. 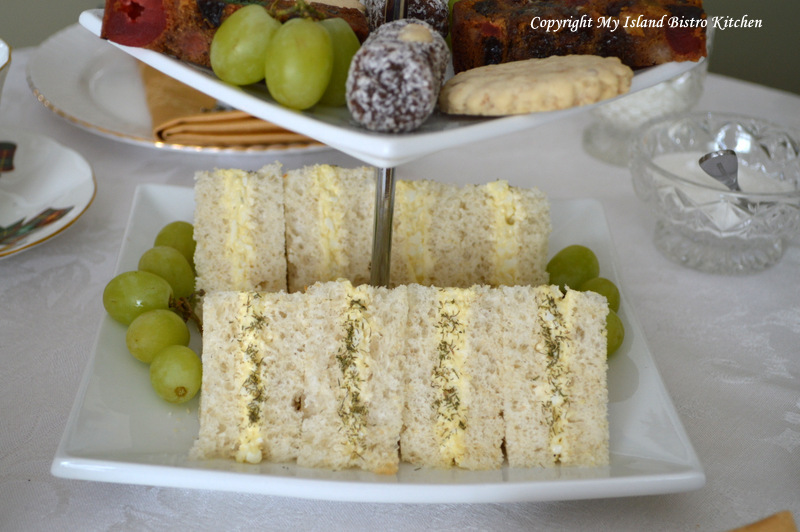 One of my favorite tea sandwiches is the traditional egg filling sandwich which is particularly good flavored with dillweed.  The yellow egg salad filling represents the yellow in the tartan.  The dill and green grapes depict the green in the tartan. 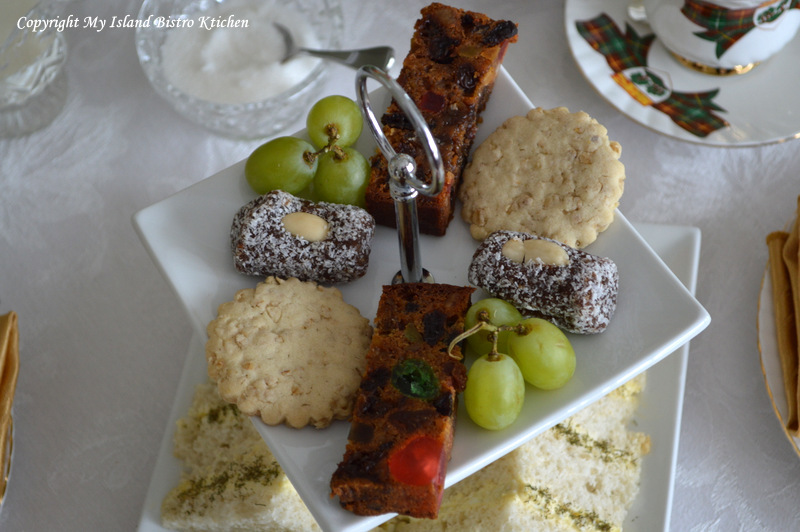 Scottish Oatcakes seem appropriate for my tea table today along with some fruitcake which, incidentally, has the colors of the Prince Edward Island tartan (you’d almost think I planned that but I didn’t!).  I added a couple of coconut roll dates to round out the sweet tier. 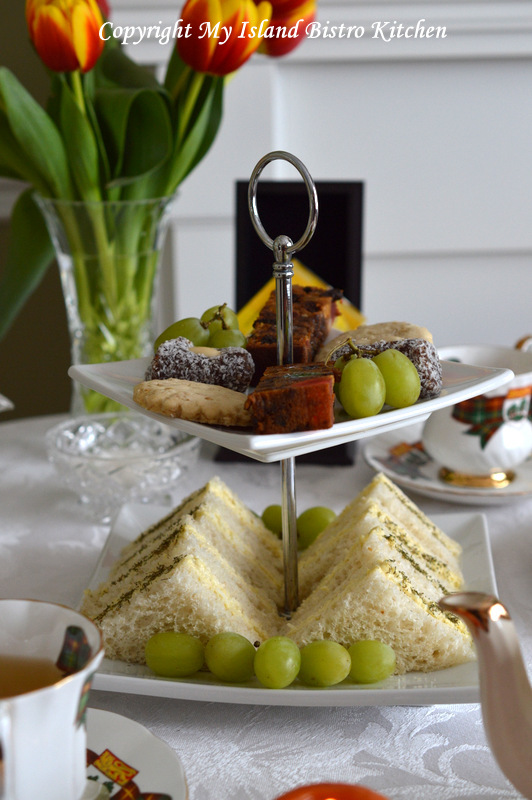 I used my small two-tier server today.  It’s ideal when I am only serving two courses at afternoon tea and it doesn’t take up much room on a small tea table as I am using today. 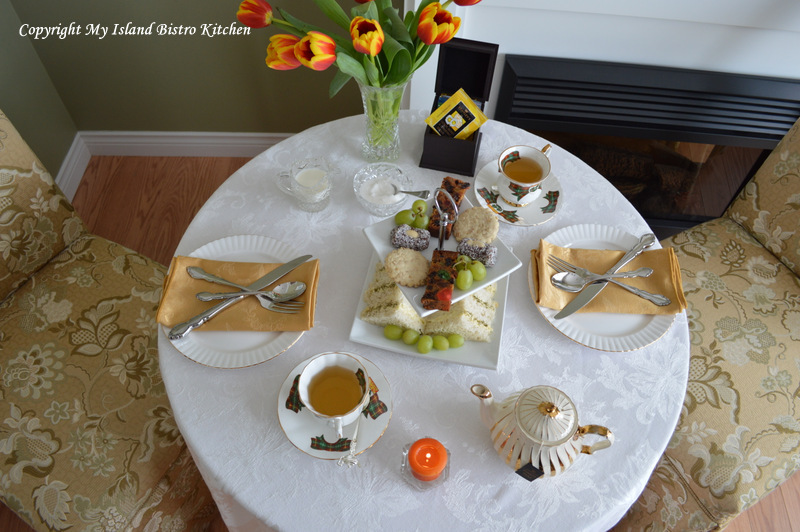 And, when it all came together, here’s what my tea table looks like today. 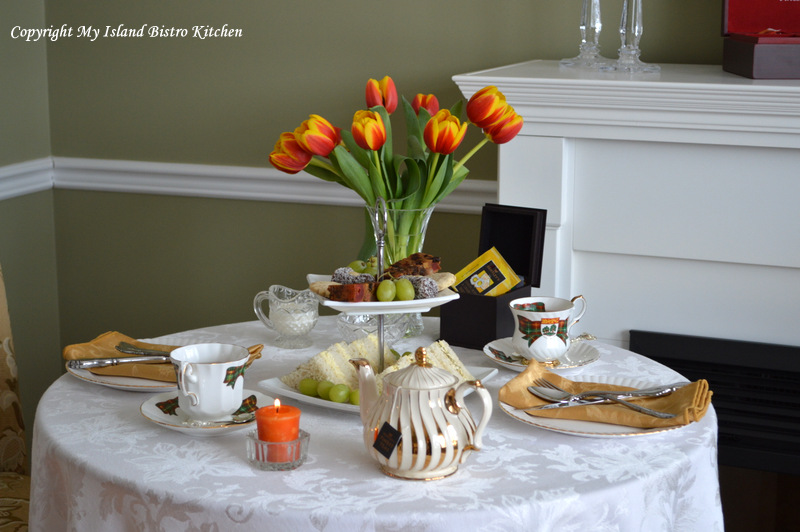 My choice of flowers for the tea table are these bright and colorful tulips, grown on PEI in the Vanco Farm greenhouses in Mount Albion.  It has been such a long miserable winter, with blizzard after blizzard for the past four months on the Island, that I need colorful flowers to brighten my life!  The colors of these seemed to work with my color scheme for today’s afternoon tea. 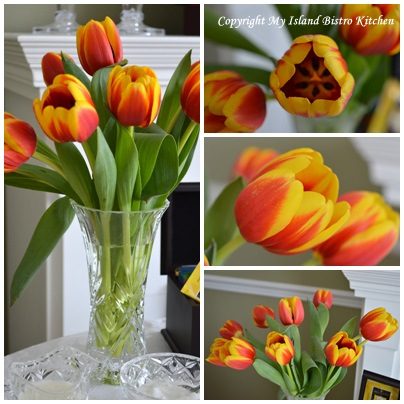 I hope you have enjoyed a glimpse into how My Island Bistro Kitchen celebrated Tartan Day today.  Do you celebrate Tartan Day?  What are your traditions for the day?
Happy Tartan Day!