Update 2019:  While Vanco Farms still grow wonderful tulips in their Mount Albion greenhouses for sale and export, they no longer (as of January 2019) operate a retail outlet open to the public on the premises.  Their fabulous tulips are, however, available locally at several retail outlets around PEI, including major supermarkets and florist shops.

It’s time again for me to share another tablesetting with you.  This time I was preparing for a casual dinner party for six and I was featuring Island-grown tulips in my centerpiece.  I wanted to keep the tablesetting very simple and streamlined, unpretentious, and understated.   But first, let’s go on a field trip to Vanco Farms to get the tulips and find out about their tulip-growing operation. 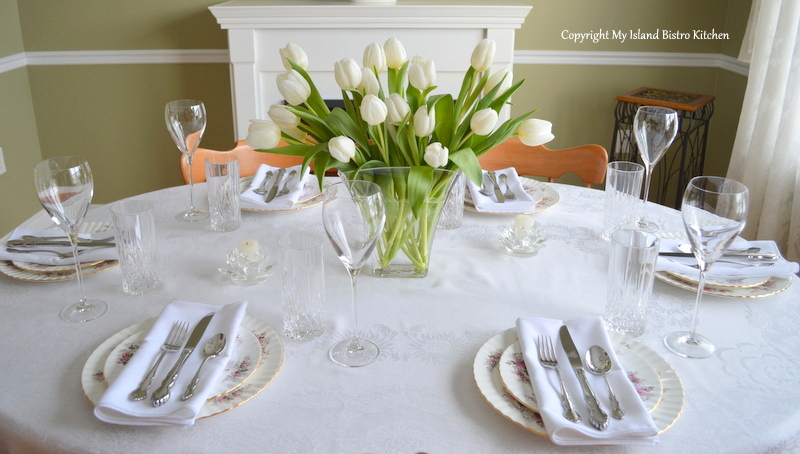 Last week was the coldest week yet on Prince Edward Island this year.  On Tuesday mid-afternoon, when I headed east out of Charlottetown, across the Hillsborough Bridge, I glanced at the computer screen on my dashboard and it was reading an outside temperature of a balmy -14C (without windchill factor which some days was down around the -30C to -34C range).  As I drove along, I thought this was an interesting day to be heading to a tulip garden, a huge one at that. 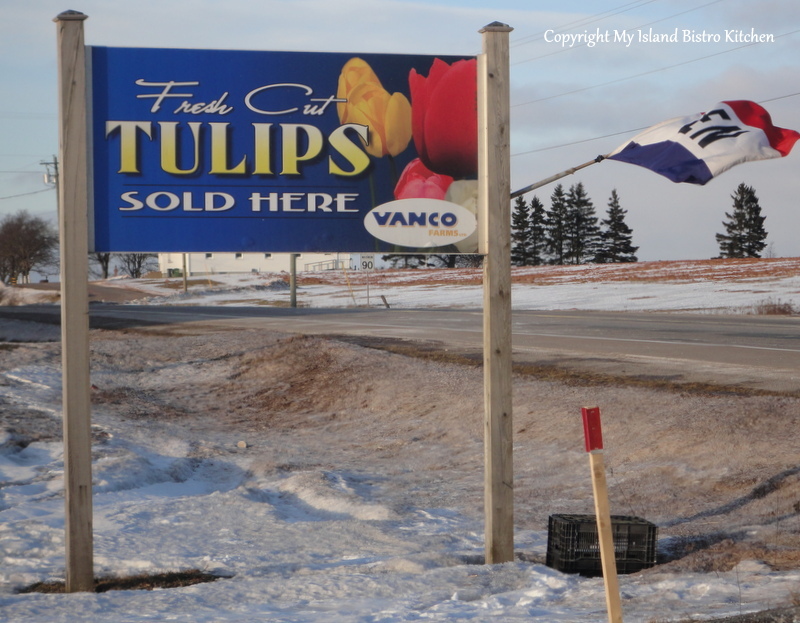 I have often stopped by Vanco Farms in Mount Albion, about a 15-minute drive outside of Charlottetown, to pick up some of their fabulous tulips at their onsite retail outlet.  While sometimes I do purchase the tulips at a local supermarket, there is something about buying product right at source – the freshness is unbeatable.  Last winter, I was rarely without their tulips throughout the house and, particularly, on my dining table.  I had contacted Vanco Farms last spring about doing this story in connection with a tablescape but it was near the end of their season and they suggested I wait till January when their greenhouse operation would be in full swing.

As is the case with several stories, particularly ones where growing food or flowers are involved, the story evolves over several months so I can capture the various steps in the process.  So, let’s pick up the story way back on May 10, 2012, when, in preparation for this feature, I photographed a huge field of Vanco tulips in full bloom in Pownal, PEI.

This was a field of tulips that were about to be cut down so that all the plants’ energy would be generated towards their bulbs that grow and multiply underground and not directed into the pretty blooms.  How heartwrenching to see a tractor and cutter mowing down all these colourful petals; however, it is for long-term gain.  The bulbs that are large enough will go for bulb sales or will make their way into the greenhouse to be grown for cut flowers over the winter.  The smaller bulbs will be replanted in the fall and will be given the time to mature and grow into the more desirable large bulbs.  Large bulbs will produce the larger, more premium blooms with stronger stems. 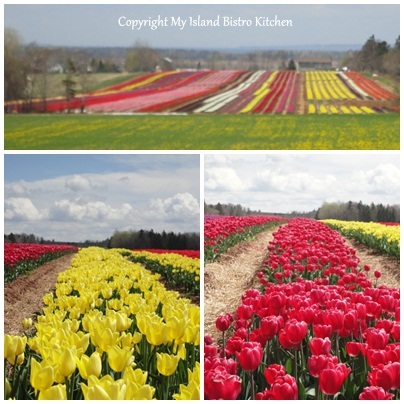 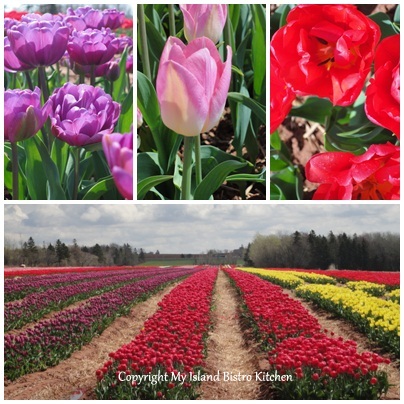 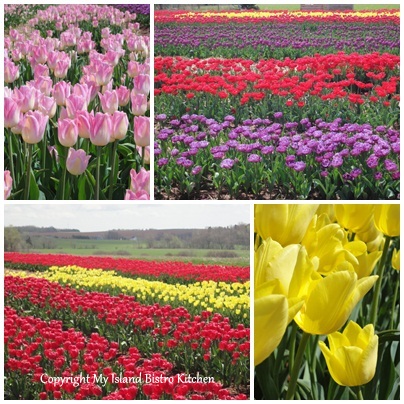 So, fast-forward to January 22, 2013, when I visited the Vanco greenhouses and production facility.  I was met by Bas Arendse who toured me through their tulip-growing operation.  Seriously, on a cold January day, there is nothing more uplifting than to stroll through warm, bright greenhouses with thousands of tulips at various growth stages through to bloom.

Vanco Farms began growing tulips in 2002 with a modest experimental crop of less than one acre.  That venture has grown exponentially and, today, they grow some 3 million bulbs covering 40 acres – can you imagine and picture 40 acres covered in fabulous colorful tulip blooms!  I asked Bas what made Vanco Farms decide to start growing tulips on PEI (they are the only commercial tulip grower on the Island).  He tells me he grew up in Holland on a tulip farm that is still run by his father and sister and, when he moved to PEI, it was natural for him to grow tulips.  Yes, I think it would be fair to say that tulip-growing runs through Bas’ veins and he has it down to a science.  Thus, growing tulips is second nature for Bas.  He says about 50% of their bulbs still come from Holland while the other 50% come from their own fields in PEI.

So, basically, here is the process.  The bulbs are planted in the fields in the fall so they have a chance to root before our harsh, cold winter arrives.  In the spring, once the tulips come into full bloom, the petals are all cut off the plants.  The bulbs stay in the ground for about 6 more weeks when they are then harvested.  The bulbs are dried and separated with the smaller ones destined for field growth the following fall and the large ones set aside for greenhouse growing over the winter.

The larger bulbs are planted in these trays in October-November and are kept in cold storage to recreate winter-like conditions for the bulbs – in other words, to trick the bulbs into acting as though it is winter.

These are then moved into the greenhouse where the warmth will trick the bulbs into acting as though it is spring and time to grow.  This process, known as tulip-forcing, means the tulips will be ready for market in about 21-28 days.  Keeping a steady schedule of when these bulbs are taken out of cold storage at staggering times ensures there is always an abundance of tulips ready for market throughout the winter and early spring months.

When the tulips are ready for cutting, they are picked and loaded into these carts. 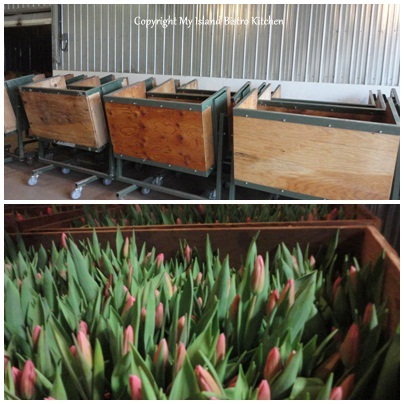 The tulips are then processed by this machine that cuts the bulbs from the stems.  These bulbs will go into storage and be planted again next fall. 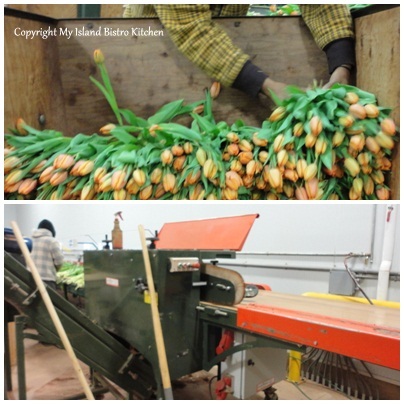 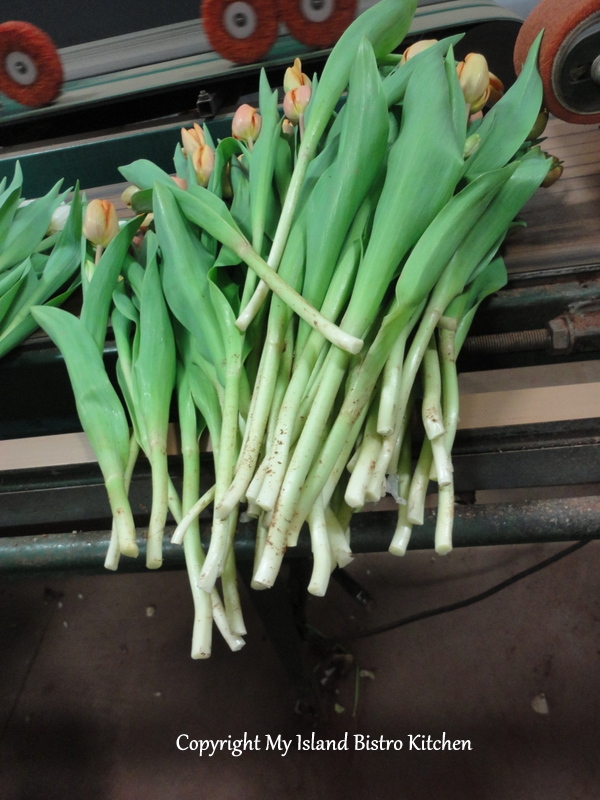 An assembly line of workers gather the tulips into bunches and place them on the conveyer belt. 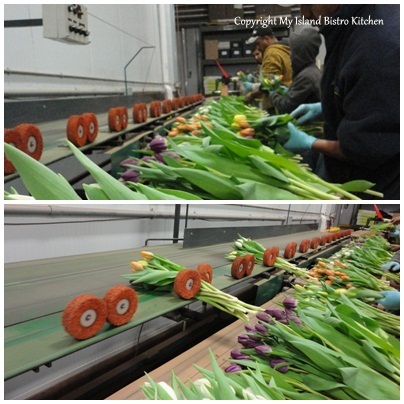 The conveyer belt takes the tulips through the machine that wraps elastic around them to hold them in place. 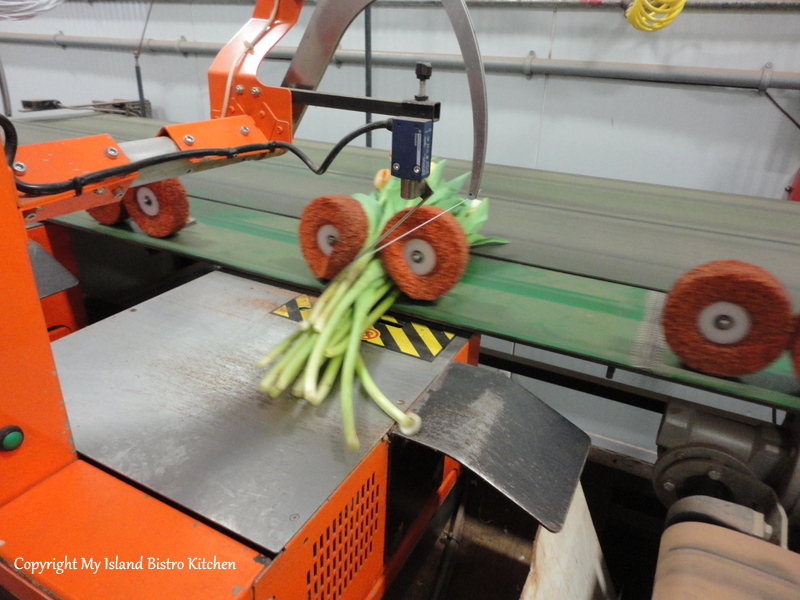 At the end of the conveyer belt, a worker takes each bundle of tulips and slips it into a plastic sleeve. 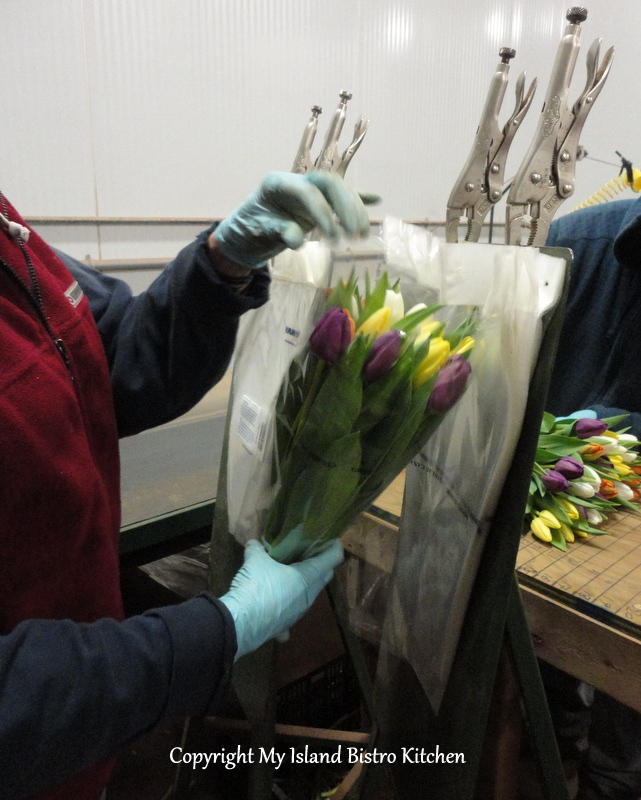 The tulips are then placed in these crates which sit in water for about 30 minutes to allow the thirsty stems to soak up a drink. 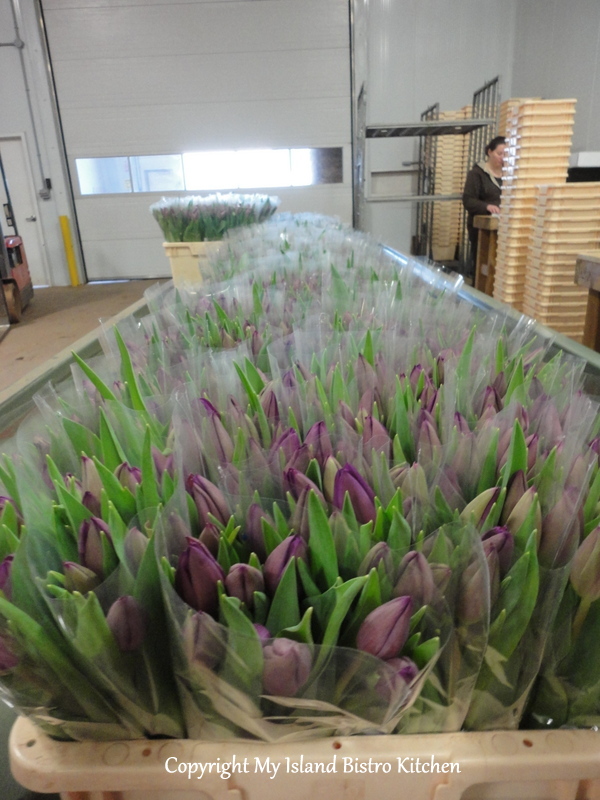 From there, the drained crates of tulips move into a cool storage room where the bundles of tulips are packed in boxes ready for shipping. 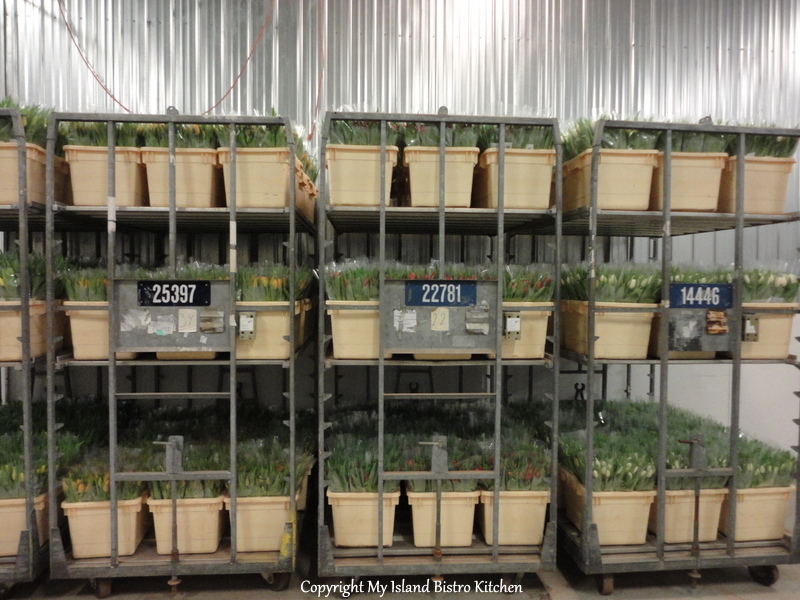 While Vanco Farms does produce some tulip bulbs for sale, that accounts for only about 10% of their business with the remaining 90% coming from the sale of cut tulips that are grown in their greenhouses.  In terms of best sellers, Bas says the most popular colors of tulips are yellow, orange, white, and pink followed by red and purple.  I like them all!

I asked Bas what the biggest challenge is to growing tulips in PEI.  He says our typically cold spring weather can pose an issue, particularly if there is a heavy frost.  This can cause the stems to go hollow and the bulbs to not grow.

Tulip-farming at Vanco Farms is a year-round operation despite our relatively short growing season on the Island.  January to May is their busiest time because it is when the greenhouse is in full production and so it is cutting season.  During this time, they will employ between 15-25 people and have three delivery trucks on the road in eastern Canada and the New England area of the United States.  The rest of the year is devoted to field work and processing tulip bulbs.

Vanco tulips are available at many places on the Island including the retail outlet at the farm in Mount Albion, major supermarkets, most flower shops, the Saturday Farmers Market in Charlottetown, and Riverview Country Market in the east end of the City.  They also export a large portion of their greenhouse-grown tulips from January to May.  In fact, their delivery trucks transport shipments of fresh tulips to Nova Scotia, New Brunswick, and Quebec twice a week and to Boston once a week.

It’s always a highlight of my winter when I discover Vanco tulips are on the market!  Their colourful blooms always inject a bit of bright color into those dark, dreary winter days.


I like tulips for dining table floral arrangements.  Not only do they have beautiful simplistic blooms on long elegant stems with wonderful greenery but they are also not heavily scented which means they don’t compete with food scents.  There are any number of ways to arrange tulips for the dining table.  Here I have selected Vanco’s Snow Lady white tulips and I simply arranged 20 of them in a fluted vase for this casually-elegant tablesetting because I was looking for something very simplistic and not fussy.  I chose white because it blends in with winter and also because it matches anything.  In this particular setting, I used a white tablecloth and napkins and my china pattern which is largely white.  I like how the white blooms just seem to pop from the greenery!  The wine glasses I chose to use are very simplistic and are actually somewhat tulip-shaped themselves.  I opted to go with a plain, flat napkin fold because I didn’t want anything to detract from the tulips – I wanted them to be the focal point of the table.  I also chose just a couple of small crystal votives, again so there would be nothing to compete with the floral centerpiece. 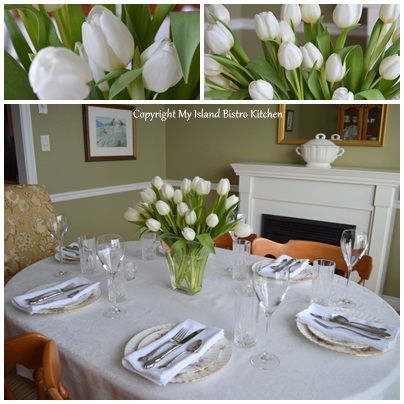 Florist Bernadette Praught of Bernadette’s Flowers in Stratford, PEI, has high praise for Vanco tulips.  She says being able to go directly to their greenhouses about 10 minutes from her flower shop and pick up freshly-cut tulips means she is getting the freshest flowers possible for her customers.  Bernadette says tulips are thirsty flowers and do best if arranged directly in water as opposed to in oasis arrangements.  Tulips can be used in combination with other flowers and made into more elaborate arrangements.   Bernadette says tulips pair well with roses and with a variety of greenery and Baby’s Breath.  So, tulips are a very versatile flower.   You can go with something very simple as I have done here or you can really dress them up.


For more information on Vanco tulips, visit their website.  Vanco Farms Ltd. is located at 9311 TransCanada Highway, Route 1 in Mount Albion, PEI.  The next time you are buying a bouquet of tulips, be sure to look at the sleeve label….you just never know, they might be ones that were quality-grown right here on Prince Edward Island!