The third weekend in September signals the Prince Edward Island International Shellfish Festival.  Seafood lovers from all over the world converge on Charlottetown for a weekend full of everything related to seafood, lots of great PEI food and entertainment.  Now in its 19th year, this Festival continues to grow in popularity each year.

This Festival was the idea of local restaurateur, Liam Dolan, who saw it as a way to extend the PEI tourism season into the late summer.

The weekend kicked off on Thursday evening with a grand feast and frolic dinner hosted by celebrity chef, Michael Smith.  This dinner was held in a gigantic tent on the Charlottetown Event Grounds and this annual event always sells out early.  Some 500 people attended this year’s dinner which was beach themed.

The four-hour evening began with a meet and greet with Chef Smith — lots of autographs and photo opps.

The competition for the best oyster grower on the Island was also underway during the reception hour where there were lots of opportunities to watch oyster shucking and taste all the different PEI oysters. 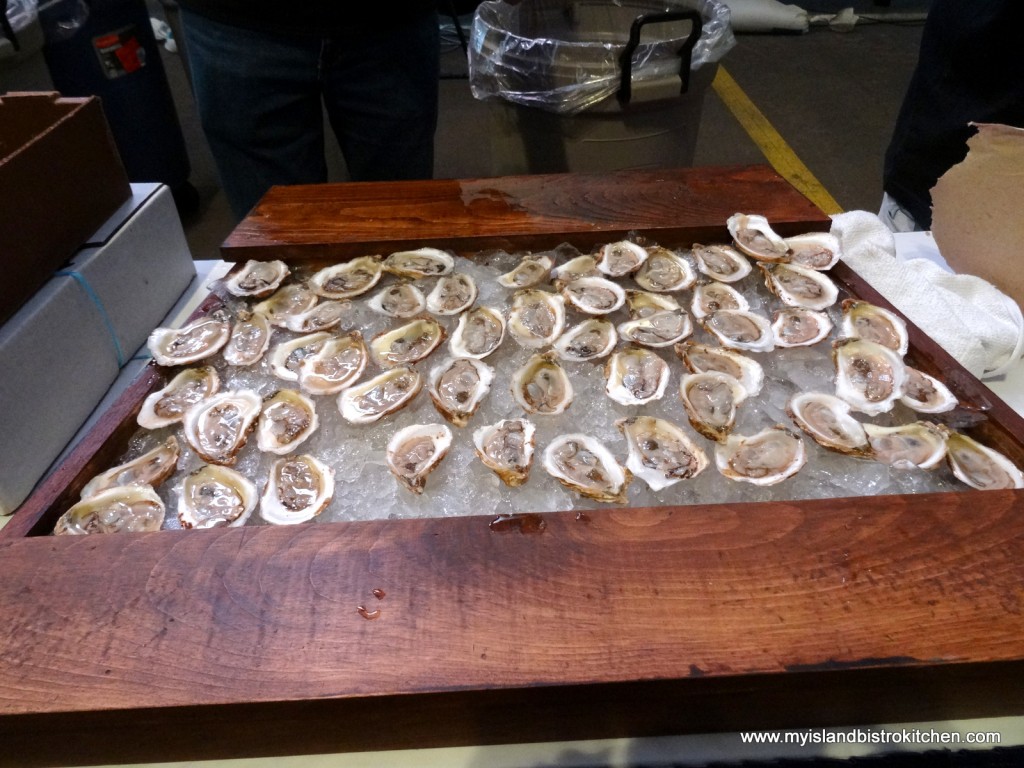 Some of the oyster competitors for the Oyster Grower of the Year Award.

The oysters were formally being judged by a panel but guests also had the opportunity to vote for the peoples’ choice.  This year, both honours went to Colville Bay Oysters of Souris, PEI.

Lots of hors d’oeuvres were served by waiters who continuously circulated amongst the crowd with trays of tasty appetizers. 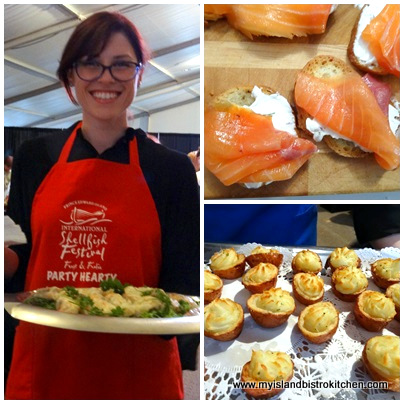 Now, when you walk into a large tent and see beautifully set tables with a black and white theme, you’d probably think you’re going to a formal sit down dinner with a plated meal.  Well you are, well…sort of…..but you may be doing the plating and serving!  You see, this event is an interactive dinner and every guest participates in some event at some point during the evening. 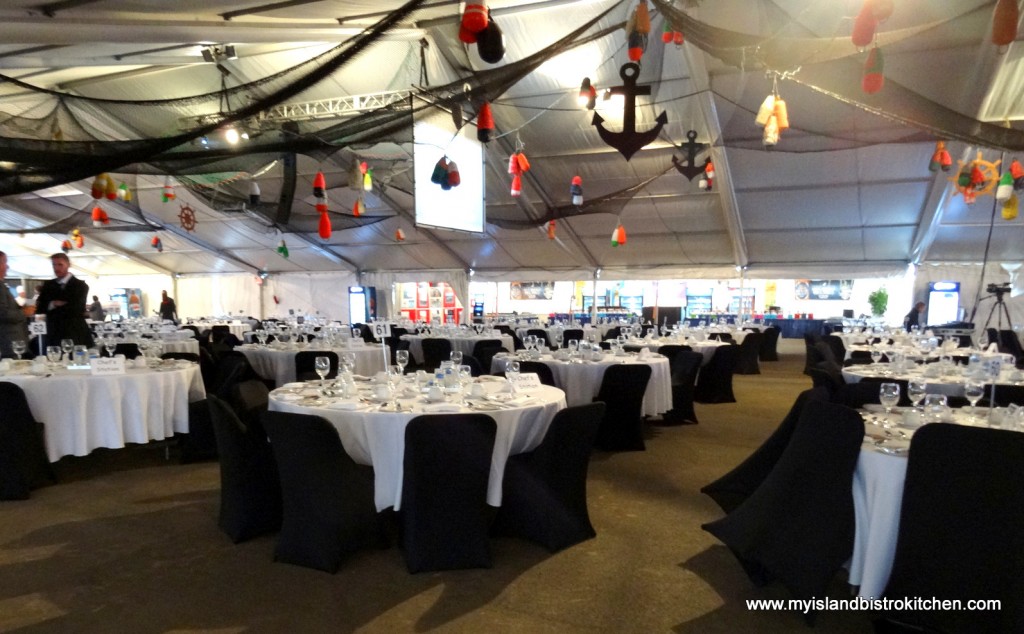 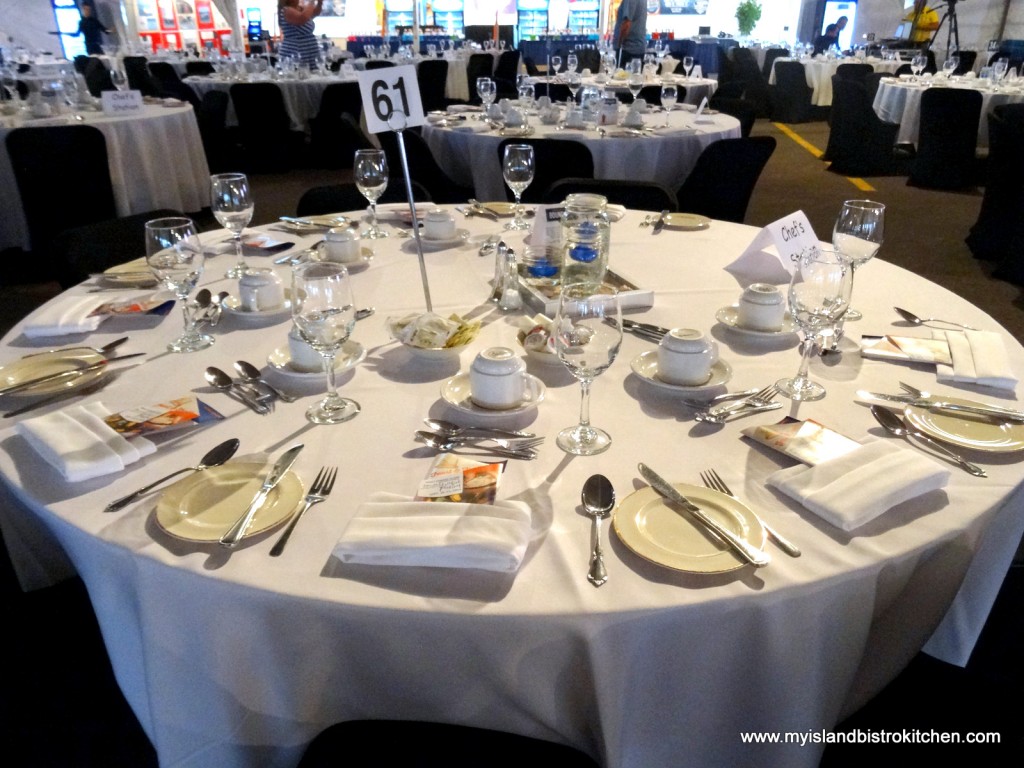 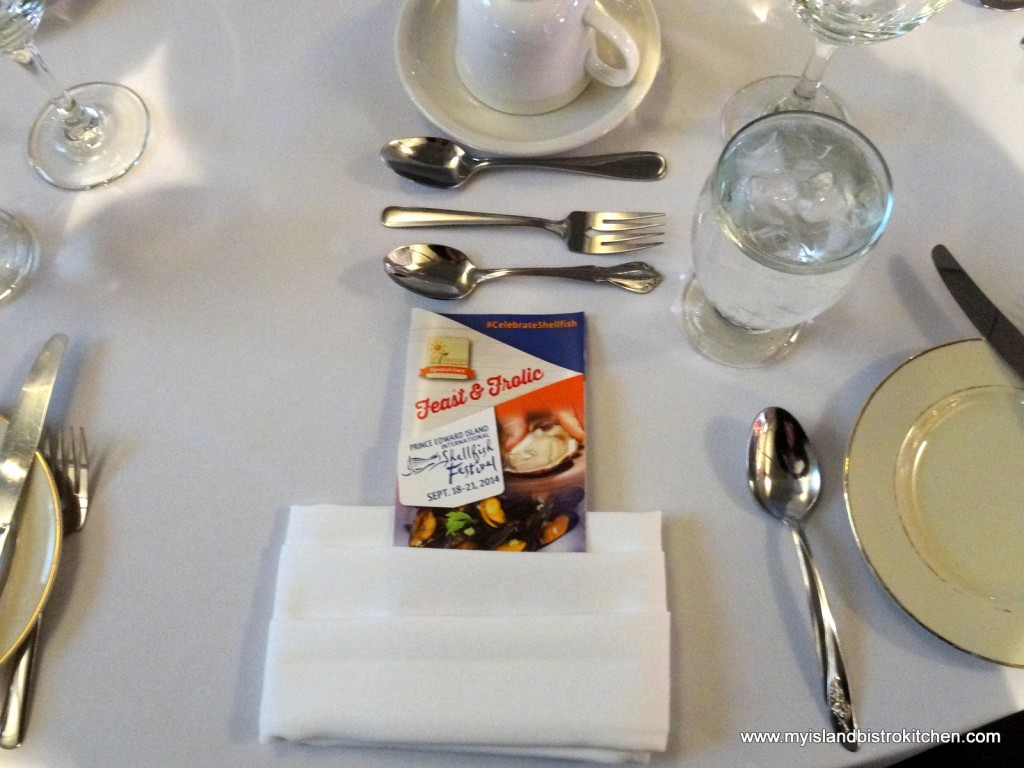 A Maitre’D was selected from each table and was presented with a package of information, including roles to be assigned to table guests.  Yes, each table had a bartender, a member of the paparazzi, beefiest cook, best cook, fastest cook, a beachcomber, and a rock star.  Guests really embraced the concept and soon every one was fully engaged in the fun. 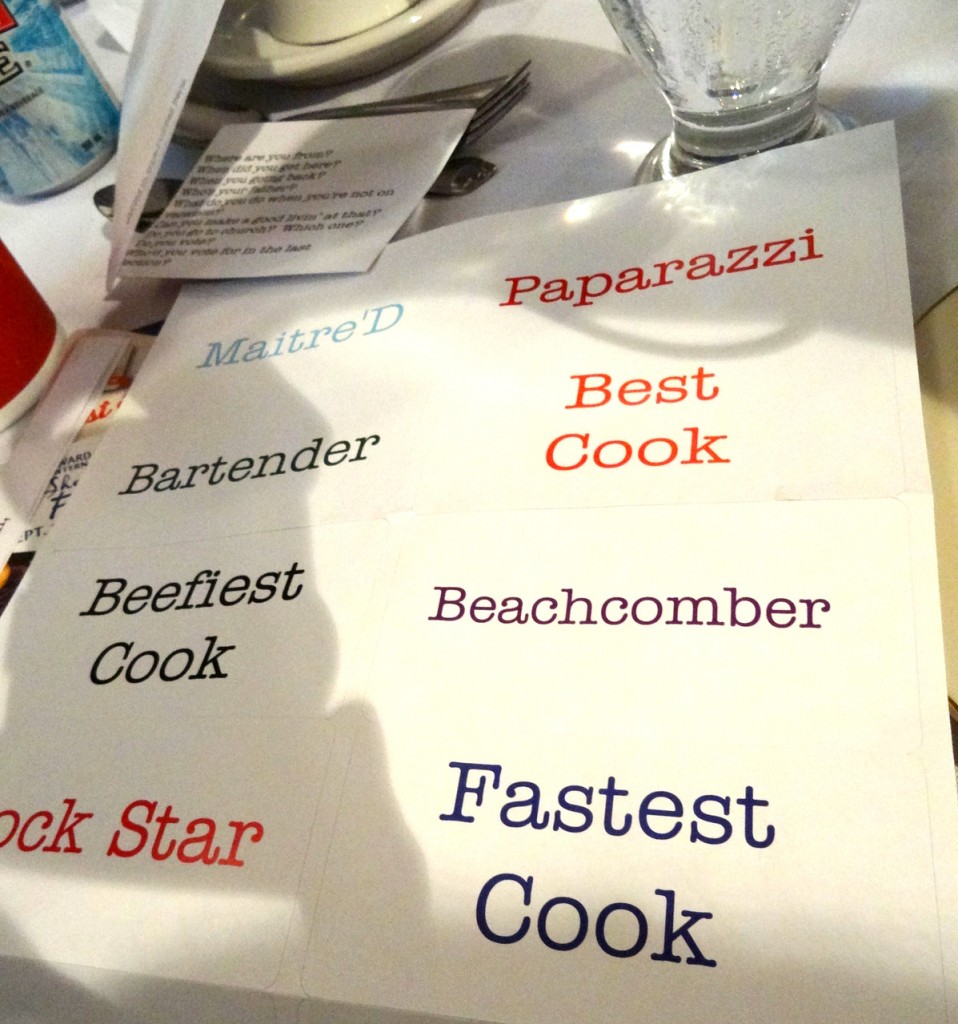 First, Chef Michael took the bartenders from each table aside to explain how to make Caesars. 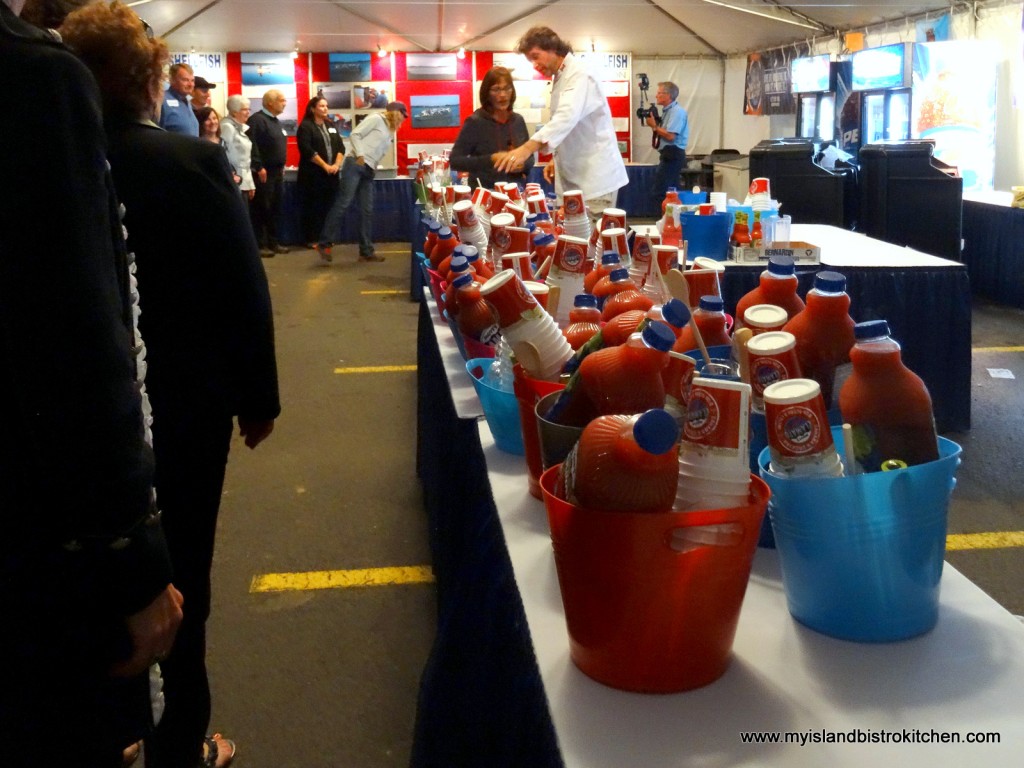 Each bartender collected a kit of supplies and returned to their tables to make the Caesars tableside and then serve them to their tablemates.

Biscuits were on the table to accompany the chowder course but….no butter!  That’s because, the fastest cook at each table had to actually make the butter.  Lots and lots of shaking of a Mason jar full of milk and, voilà, freshly-made butter for the biscuits!  Yup, you really did need to work for your dinner at this event! 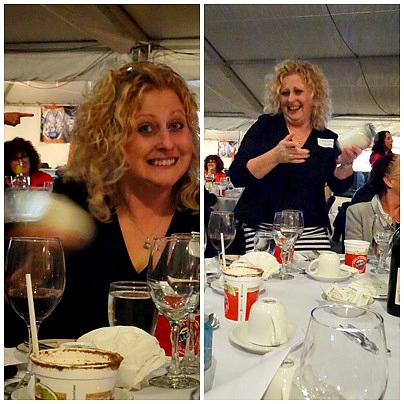 Next came three versions of chowder – one cold and two hot, served in glass jars and presented in these cool wooden trays. 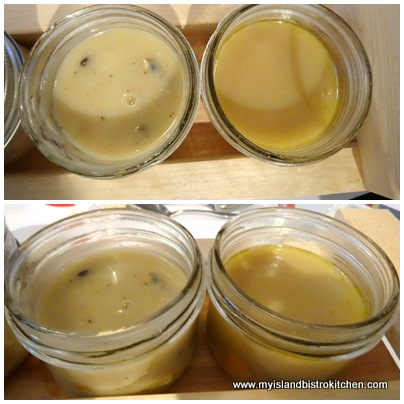 Chef Michael then took all the “beachcombers” off to an onsite man-made beach to go combing for hidden beer caps.  Once they found beer caps, they were each presented with a bucket of beer to bring back to their tables. 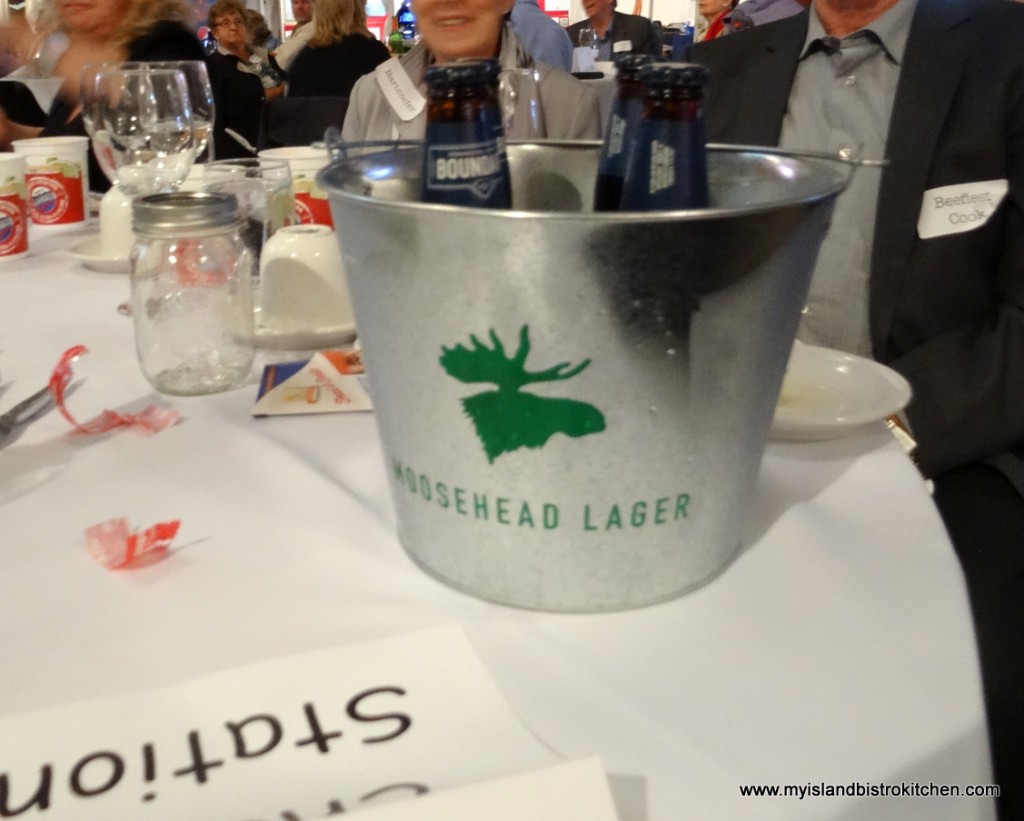 Then, we sent our table’s “Beefiest Cook” off with Chef Michael and back our cook came with a tray of slow roast striploin which he carved tableside and served to each guest at the table.

Wait staff delivered large bowls of PEI lobster to each table along with bowls of garden-fresh vegetables and brown butter mashed PEI potatoes. 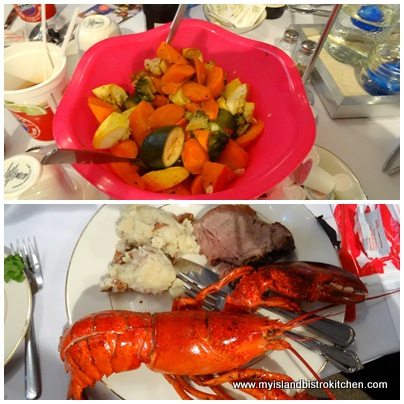 Our “Best Cook” assignee joined Chef Michael at the back of the tent to learn how to plate food.  He returned to the table with the makings for a summer berry shortcake – cowberry ice cream, fruit compotes, and biscuits.

Then our “Best Cook” wowed us with his plating skills! 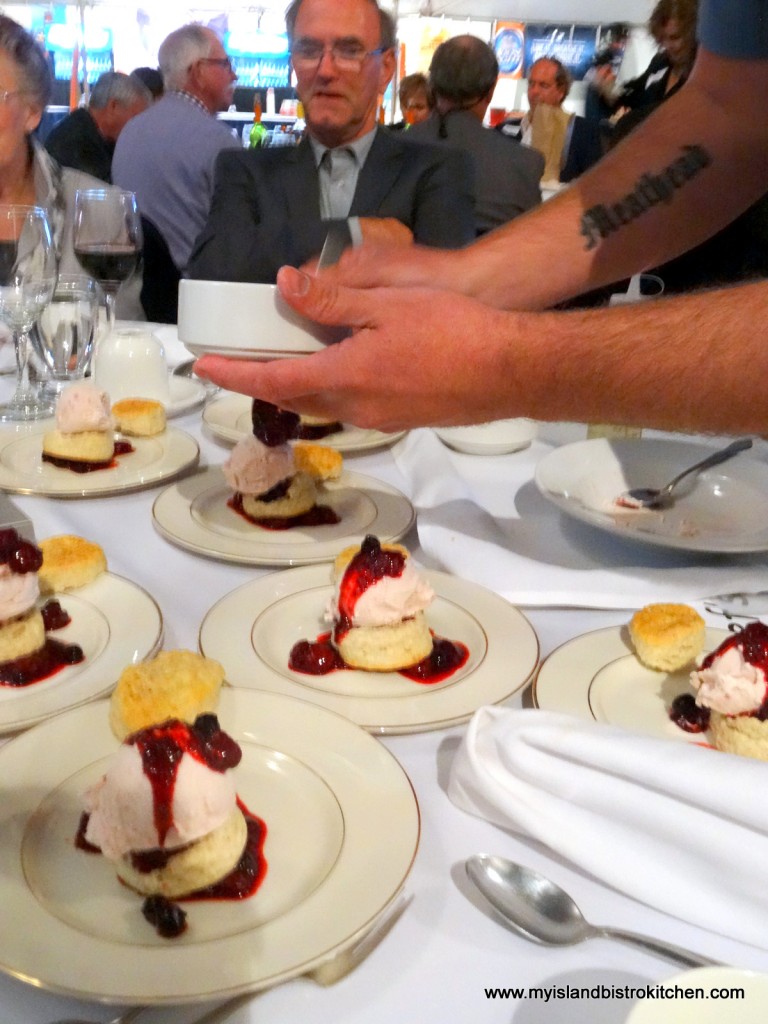 Meanwhile, our “Rock Star” assignee was responsible for coaching us on our singing skills so we could sing the theme song, “A Day on a PEI Beach” at the end of the evening.  Yours truly was the “Paparazzi” for our table.

While each table actually provided their own entertainment with all their assigned tasks, lively musical entertainment throughout the evening was provided by Mark Haines and Brad Fremlin.

This was a very unique way to serve dinner and it sure got people involved and interacting with others at their table.  It kept the evening lively and moving along.  Executing this kind of adventure for some 500 guests at a location where the only kitchen is a mobile one and where literally everything had to be brought in — food, equipment, tables, chairs, linens, dishes, etc. — is no small task.  The sheer planning for this event would have been a monumental undertaking.  Kudos go to Chef Michael Smith and the large team of chefs, waiters, hospitality and support staff from the Culinary Institute of Canada, and others for a phenomenal event.

If you ever have the opportunity to go to this annual dinner, I highly recommend it — but, fair warning, it will be full of hijinks and hilarity and come prepared to be an active participant, not just a spectator!