There are three wineries in Prince Edward Island and the oldest of them is Rossignol Winery. To find out more about Rossignol wines and products, I visited the winery and vineyards in Little Sands where I met owner and vintner, John Rossignol.

In the early 1990s, John was looking for a new career and one which he could pursue while living in a rural environment. He had developed an interest in wine making and in a special place called Prince Edward Island (PEI) where there were no established wineries. Hence, he saw a potential niche market. However, his dream was not without some challenges, chief amongst them being that there were no existing laws in PEI governing and regulating commercial wine making. Working with the provincial government for over two years, John pursued his dream and, in 1995, the Liquor Control Act and Regulations were enacted which allowed for commercial wine production in PEI.

In the meantime, while the process to develop and enact legislation was underway, John was optimistic so he planted grapevines to get a vineyard established so he’d have grapes available should the Province give permission for commercial wine making. The winery was built in 1994 and the first wine produced in 1995, upon enactment of the enabling legislation.

Currently, there are about ten acres of grapevines grown onsite at the winery. The remainder of the grapes needed for production are sourced from other Island vineyards. 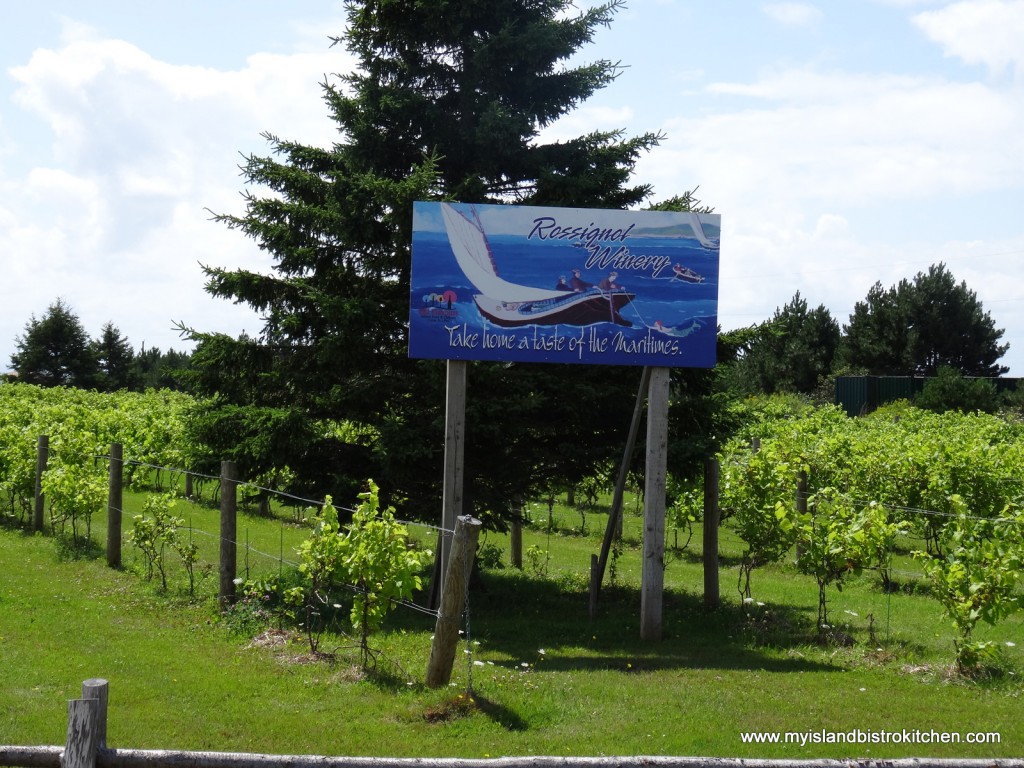 John grows four varieties of grapes. Two of the most common are Marechal Foch, a French hybrid grape that is successfully proven to grow well in the Maritime climates and l’acadie blanc that was developed in Nova Scotia.

The grapes below were photographed in mid-August.  They will be ready for harvesting in October. 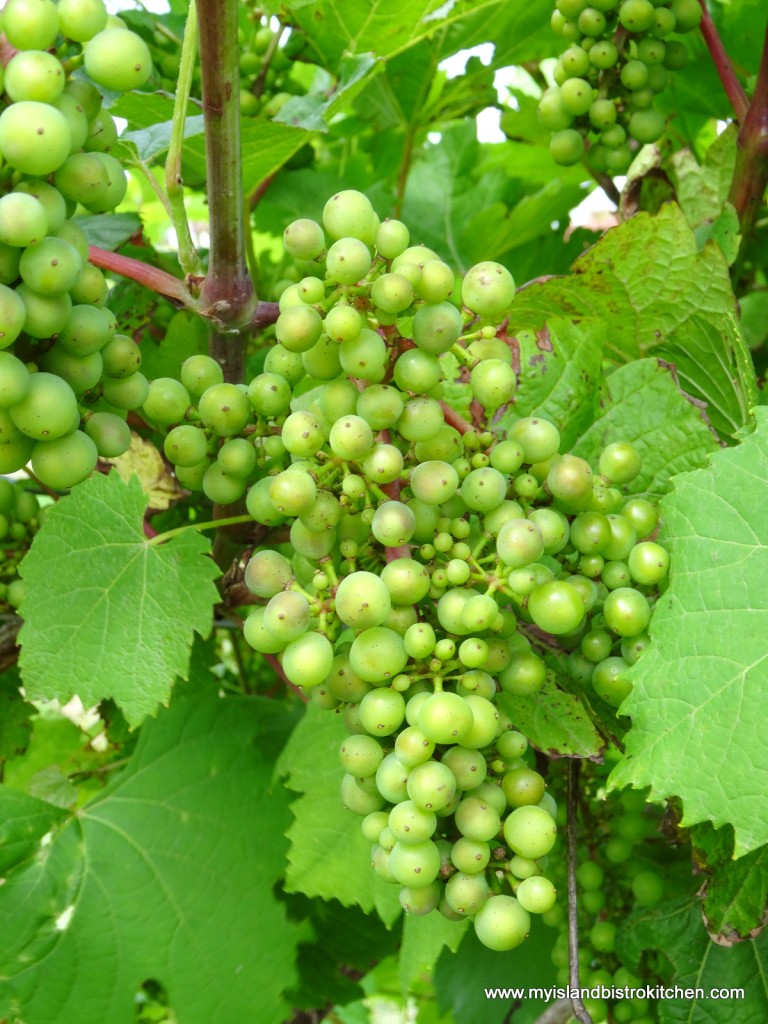 The winery also has an onsite apple orchard to produce apples for its iced apple cider, “Liberty Blossom”.

The wonderful sand sculptures at the winery are the artistic work of sand sculpter, Abe Waterman.

The detail in these works of art at the edge of the vineyard at the winery is incredible.

Since its beginnings, the winery has made a number of fruit wines (e.g., strawberry, wild blueberry, rhubarb). In the winery’s early years, John says this was a necessity as there weren’t enough grapes available to make the traditional wines as we think of them. Supportive of local products, John sources raw products such as Island strawberries, raspberries, and black currants from local farmers.

The fruit wines are especially popular in summer and are generally consumed as an aperitif. John likes the Strawberry Wine paired with cheese and says the blueberry wine can also be a table wine. This medium-sweet red wine is especially good paired with spicy, curried food. In total, the winery now produces 16 varieties of products under the Rossignol label.

When asked what the winery’s most popular wines are, John says the Little Sands White and the High Bank Red top the list. The winery also produces some specialty liqueurs, including their iced apple cider, maple liqueur, and cassis which they bottle in special Italian bottles. The cassis is a relatively new product for the winery which began the process four years ago to get this product ready for market. The cassis has been on the market for two years now and is particularly popular with chefs. 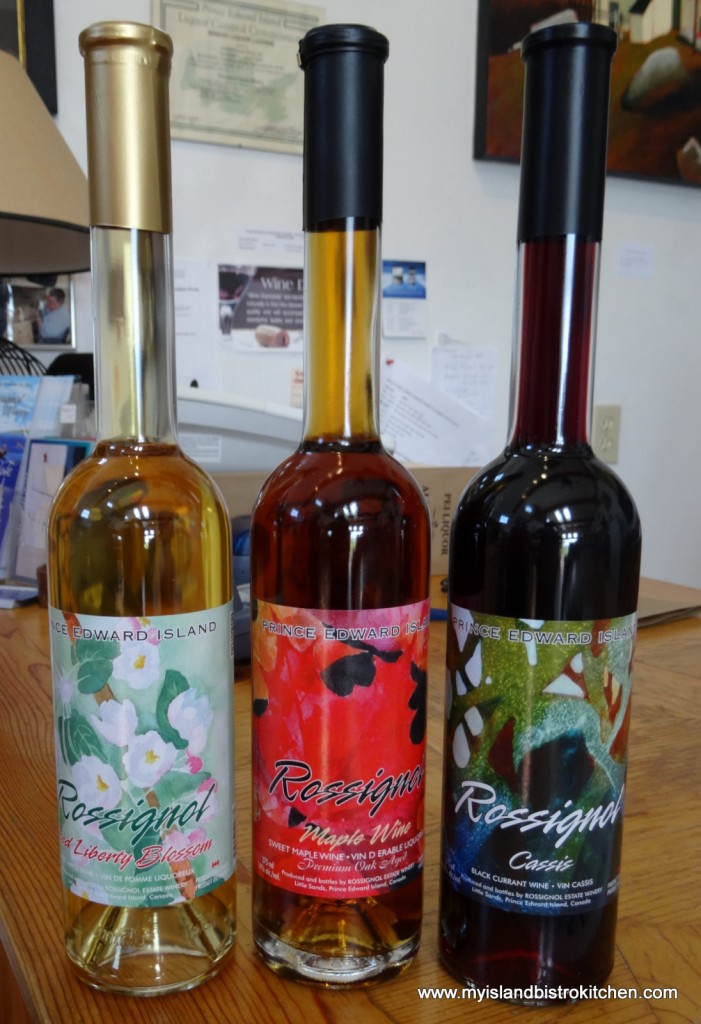 The winery also makes a wild rose liqueur from the hips of locally grown roses. These products are suitable as after-dinner drinks.

John indicates he experiences no great challenge to running a winery in rural PEI. He says PEI has good growing conditions for quality fruit which, in turn, means good quality wine.

I asked John what his greatest satisfaction is from producing wine. He says, when he started in the business, it was always intended to be a lifestyle business which it remains today. He tells me he enjoys getting to work from his nearby home without going through city rush hour traffic. He also derives satisfaction from looking for new markets that keep the business interesting and different. But, perhaps most of all, John says he enjoys a business that actually allows him to be involved in all stages of the production of the finished product. That means he farms the grapes, makes the wine, and bottles, markets, and sells it so he gets to see the entire process of production from start to finish.

After our chat about the Rossignol products, John toured me through the winery. 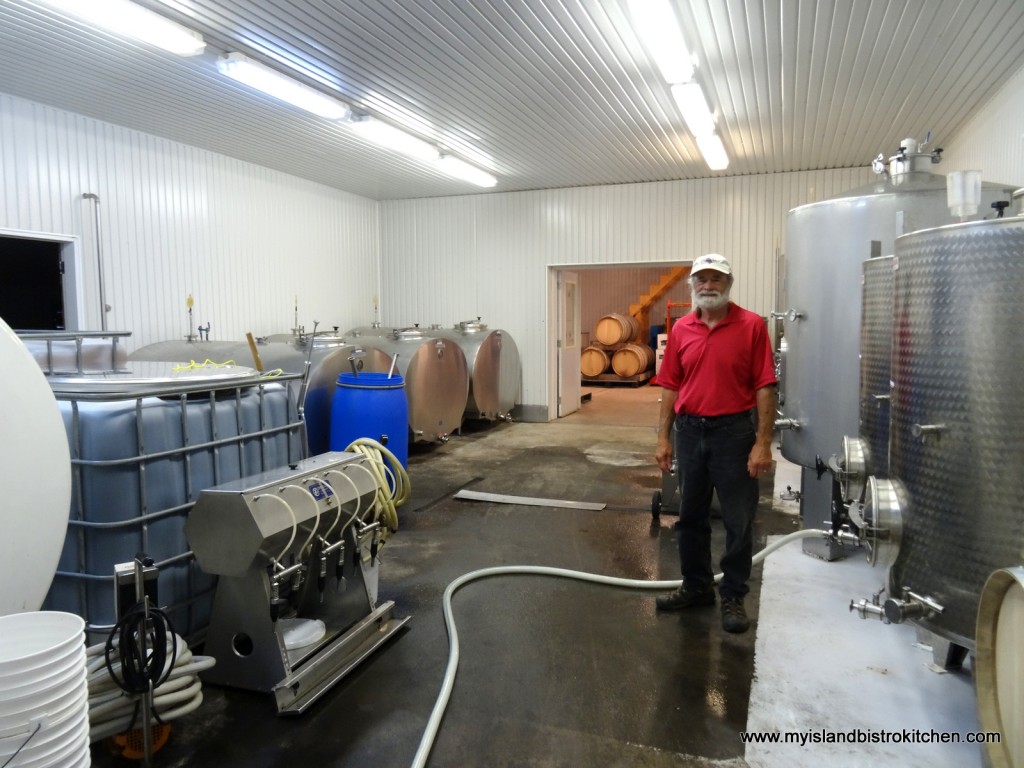 The wine is sterilized by filtration and passes through three large tanks.

Some products, such as the maple liqueur, are aged in traditional oak barrels.

The barrels in the photo below contain red wine which has been aging for two years.

During my visit, the winery staff was busy bottling wine.

Rossignol wines are presented in uniquely-labelled bottles. Labels feature the work of local painters, including John’s wife Dagny, as well as some of John’s own artwork.

One of the earliest artists involved with producing artwork for Rossignol bottles is Nancy Perkins who happened to drop by the winery during my visit.

Rossignol wines and liqueurs are available at the winery located at 11147 Shore Road, in Little Sands, PEI, as well as at Island liquor stores. The winery has at times shipped their products to Ontario, Nova Scotia, New Brunswick, Manitoba, and Alberta Liquor Commissions. Recently, the winery has sent four shipments of wines to China which has shown a special interest in PEI wines.

The winery regularly sends samples of their wines to wine competitions and, as you can see from the photo below, they have garnered many medals attesting to the fine quality of wine being produced at Rossignol Winery. 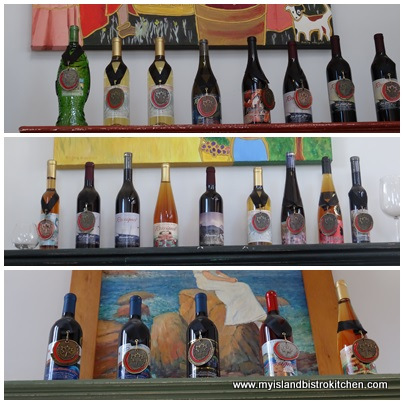 Rossignol was recently awarded the gold medal for the best fruit wine in Canada at the All Canadian Wine Championships in Ontario. That’s great recognition and validation for a winery that was the pioneer in wine making in PEI and is still going strong, producing on average about 40,000 bottles of wine annually. 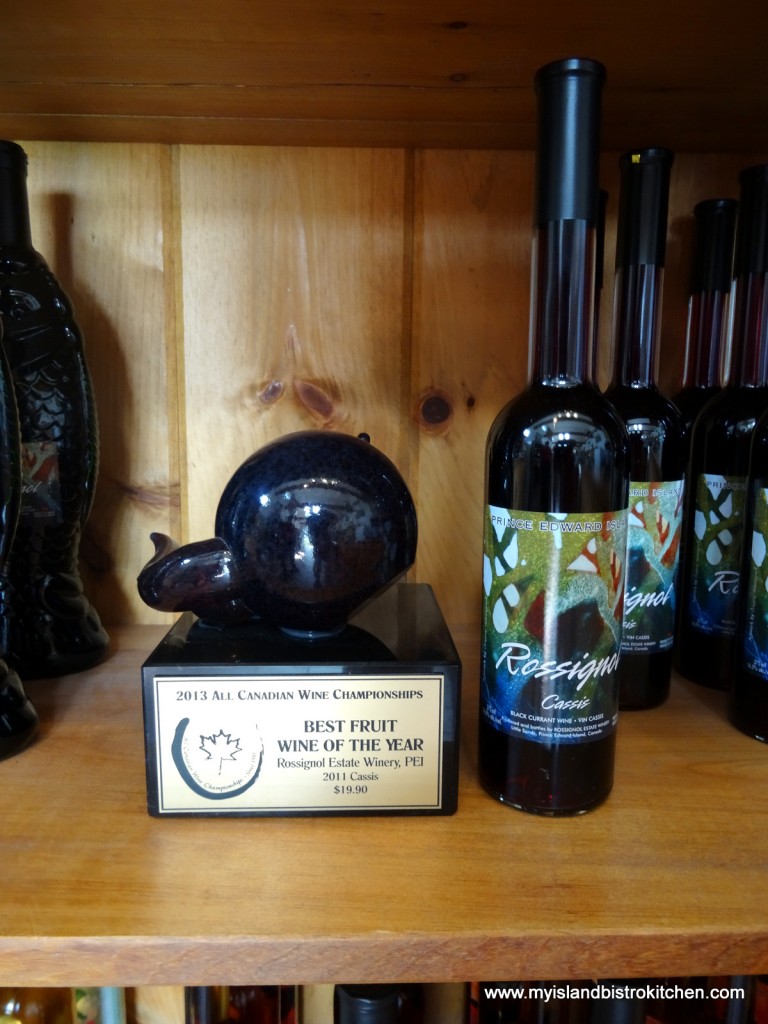 For more information on Rossignol Winery, visit their website at http://www.rossignolwinery.com/Rossignol-Winery.html