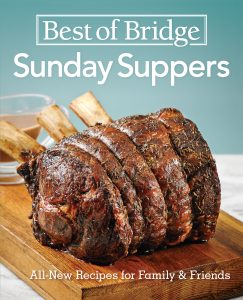 Robert Rose Inc. has offered me the opportunity to conduct a review of Best of Bridge Sunday Suppers.

This cookbook is a collection of standard home cooking recipes that would typify classic-style Sunday family suppers. The book has an attractive, sturdy hardcover and the pages are spiral bound making it easy for the book to stay open and the pages to lay flat for the recipe being made.

The book features a collection of 200 recipes spread out through 12 chapters: Salads, Soups, Big Roasts, Small Meats, On the Grill, Stews & Braises, Casseroles & Savory Pies, Pizzas & Pastas, Sides, Homemade Breads, Sauces & Condiments, and Desserts. At the beginning of each chapter, there is also a separate table of contents outlining the recipes (and their page numbers) found in that section of the book. There is also an alphabetical index at the back of the book.

Each recipe is accompanied by a one to two sentence lead-in about the recipe and many recipes offer tips and suggestions on ways to vary the recipe.

This book, like previous Best of Bridge books, uses capital letters in a font that I find too large and folksy. This makes the pages cluttery and difficult to read. Generally, the instructions for making the recipes are all lumped together in one or two very long paragraphs. This style of instruction-writing makes it difficult to follow the method. I find cookbooks that lay out the instructions in separate, step-by-step, paragraphs are more user friendly. Breaking down the steps of a recipe into separate short paragraphs eases anxiety and frustration as it is easier and quicker to find your place and progress in the instructions as you go about making the recipe.

I found the ingredients in the recipes are used in the instructions in the order in which they are listed and, generally speaking, most of the instructions are easily understandable. The recipes in the book call for, what I would consider to be, ordinary ingredients which makes it easy to shop for and to prepare the dishes. Most, if not all, ingredients would be found in standard supermarkets.

While, for the most part, exact quantities of ingredients are given, there are some recipes that are vague.  For example, the recipe for Roasted Carrot and Sweet Potato Soup with Apple and Sage calls for one medium sweet potato.  When I went to the supermarket, the potato bin had dozens of different sized potatoes – I had no idea what the recipe creator means by “medium-sized”. It would have been better to have given a weight measure of the potato required because there is a vast difference in sizes available and the size chosen will affect the texture and yield of the soup.  As well, some recipes call for 1 onion – onions, too, come in different sizes so, for the benefit of more inexperienced cooks, it would be preferable if the ingredients specified if it is ¼ cup, ½ cup, or 1 cup of chopped onions. Providing exact measures helps to ensure successful cooking, particularly for novice cooks.

There are 32 color photos in the book and they are of good quality but there is obviously not a photo for each of the 200 recipes so less than 15% of the recipes are accompanied by a photograph. Including photos is so important in a cookbook as, not only do photos of mouth-watering food inspire people to try the recipes but the color photos also give a frame of reference of what the finished dish should look like. Including a large book of page after page of solid print is not very inviting or inspiring, particularly when the subject matter is food. Adding more photos would have broken up the monotony of page after page of large cluttery print.

I tested one recipe out of the cookbook. Robert Rose Inc has given me permission to share the recipe and their photo for Roasted Carrot and Sweet Potato Soup with Apple and Sage to accompany my review of this cookbook. The recipe follows at the end of this review.

Roasted Carrot and Sweet Potato Soup with Apple and Sage

This soup combines an interesting mix of ingredients – carrots, sweet potato, onion, apple, chicken stock, apple juice or cider, sage, and cream.  The instructions did not indicate what size of chunks the carrots and sweet potato needed to be for roasting.  I cut them into 1” chunks.  The method said to roast them for 20 minutes at 450°F.  The potatoes were done in about that time and I had to remove them from the oven but the carrots took 55 minutes (and I have a true temperature oven).  I have no idea what size or shape the recipe creator intended the carrots to be cut but, if I had cut them any smaller, they simply would have burned before being roasted fork-tender.  I also had no idea what size the sweet potato was intended to be for the soup. I may have chosen a small versus medium potato but the recipe ingredients provided no frame of reference in terms of weight of the potato required.

The method said to bring ingredients “to a simmer. Reduce heat and simmer for 15-20 minutes or until everything is soft”. The recipe creator probably meant “bring to a boil”, not “simmer”; however, the published instructions were what they were so, especially for an inexperienced cook, the instructions in this regard were confusing. The instructions also did not indicate if the mixture was to be covered or not during the cooking process. I covered mine to reduce evaporation.

While the soup was a lovely orange color and tasty enough (though I think the addition of garlic could have enhanced the flavor), the soup was time-consuming and tedious to make – the vegetables had to roasted, the onion sautéed, the mixture simmered then blended, and finally re-heated with the addition of cream.

While I didn’t find the recipes overly innovative or inspiring, I would class the book as a compendium of traditional Sunday supper meals – a mix of salads, soups, mains, and desserts.  I would suggest this book would be more of use to someone who has some experience cooking versus a novice since “judgment calls” based on experience are often required, especially in terms of amounts of some ingredients (like vegetables, onions, etc).  The biggest issues I found with the book are the cluttery pages of uppercase font with the instructions jumbled into one to three long paragraphs as well as the lack of color photos to break up endless pages of text and to give a benchmark for what a finished dish should look like.

I found some of the instructions and terminology a bit bizarre.  For example, the recipe for Sticky Carrots (p. 216) refers to a sauce as “goo”. I have never seen a recipe in a published cookbook use this type of terminology to refer to a food and, frankly, I find that unappetizing and off-putting.  The first line in the instructions for this recipe say “Choose a saucepan in which the carrots can sit snugly in a single layer along the bottom (but don’t put them in the pan quite yet)”. Then, why mention this as a step if the step is not dealt with at that point?

The recipe for Basic Gravy (p. 266-267) suggests using lemon juice or wine in the gravy.  In the instructions, it refers to using the lemon juice (or a splash of wine) if the gravy tastes “a little flat”. I’m not sure what is meant by “a little flat” and the recipe does not indicate how much wine or lemon juice is to be used and this useful detail would be the difference between a successful gravy or not.  These kinds of ingredients and instructions prompt me to suggest that the book could have benefitted from some closer quality control.

The following recipe and accompanying photo are courtesy of Best of Bridge Sunday Suppers by The Best of Bridge © 2017 www.robertrose.ca  Reprinted with permission. Available where books are sold.