Quite some time ago, I shared my standard “go-to” recipe for basic poultry stuffing/dressing.  At the bottom of this posting, you will find the link to that recipe and an explanation for the difference (if you don’t already know) between stuffing and dressing.

In this Sweet and Savory Sausage Bread Stuffing recipe, I have jazzed up the stuffing by adding sausage meat to it.  Dried cranberries can also be added so long as they have first been plumped in some warm rum (or warm chicken stock) for 10-15 minutes.  Otherwise, the cranberries can be a bit hard and chewy in this stuffing.  The cranberries are an optional ingredient but they do lend a pop of color and texture to the finished product.  I sometimes, though not always, add them in. The sweetness in this stuffing comes from both the chopped apple and a bit of maple syrup which also adds to the moistness of the stuffing.

What gives this stuffing its unique flavour is the kind of sausage used.  My local butcher shop (KJL Meats in Charlottetown) is known for its creativity in making sausages.  To get the best choice, it means an early visit on Saturday mornings when they have their best selection available.  I have a couple of favorites I gravitate to for bread stuffing/dressing and they are sundried tomato or honey garlic sausages. Other flavours may, of course, also be used, according to personal taste preferences.  I remove the sausage casing and break up the meat then lightly scramble fry it with the aromatics (onion and celery) for 3-4 minutes, or until the meat is no longer pink.

This recipe should yield approximately 4-5 cups of stuffing/dressing, depending on how dry/wet the potatoes are when cooked and the texture of the bread crumbs used.  The recipe, however, is easily scalable so it can be doubled, tripled, halved, and so forth to meet the size of the chicken or turkey.

To make this recipe gluten free, simply substitute gluten-free bread crumbs in the same amount called for in this recipe and ensure that all other ingredients called for are also gluten free, including the sausage and liquid chicken bouillon.  Some butchers, like KJL Meats, do make gluten-free sausages. I save all the crusts from gluten-free bread and then use my food processor to crumb them coarsely for use in stuffing and then freeze the crumbs in airtight freezer bags for use as needed.

Mix in the bread crumbs along with the melted butter, water, maple syrup, parsley, and chives.  Stir to combine.  Season with salt and pepper to taste.

Loosely fill the body cavity of turkey or chicken with the stuffing. Roast turkey/chicken according to package directions for stuffed poultry and use a food thermometer to ensure that both the poultry and the stuffing have reached the safe minimum temperature.

Alternatively, make the stuffing into dressing by lightly pressing the mixture into one or two greased tinfoil-lined loaf pan(s). Cover with tin foil and bake in 350°F oven for apx. 15-20 minutes then remove tin foil and bake for 10-15 minutes longer, or until lightly browned on top. Let cool in pan(s) for at least 15 minutes then lift the tinfoil out of the loaf pan(s) and slice the dressing.

NOTE:  Depending on how wet the variety of potatoes may be when cooked, additional bread crumbs may be needed to achieve the desired texture of the stuffing. 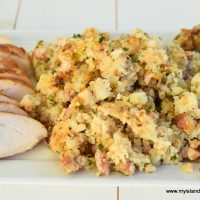 NOTE 1: Depending on how wet the variety of potatoes may be when cooked, additional bread crumbs may be needed to achieve the desired texture of the stuffing.

NOTE 2: To make this recipe gluten free, simply substitute gluten-free bread crumbs in the same amount called for in this recipe and ensure that all other ingredients called for are also gluten free, including the sausage and liquid chicken bouillon. 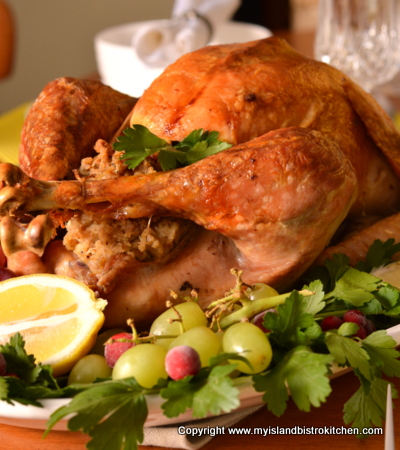 There is nothing like the scent of a turkey roasting in the oven!  I love a roast turkey dinner with all the trimmings and I especially love the bread stuffing or, you may know it as  “dressing”. The theory is that, if it goes inside the turkey cavity, it’s called “stuffing” but, if it is cooked separately (as in a casserole or loaf pan), then it’s called “dressing”.   Regardless what it’s called, it just would not be a roast turkey dinner without this wonderful savory side dish.

There are many ways to make the turkey stuffing and many different ingredients and seasonings that can be used.  Here on PEI, the most common seasoning is summer savory. In fact, this is a herb I grow in my garden. My grandmother always grew this herb, dried it, and hand-crushed it for use in stuffing/dressing throughout the year. Old traditions prevail!

Some folks make a stuffing that is quite dry and crumbly while others, like myself, make a version that is more moist.  Some use bread cubes while others use either coarse or fine bread crumbs. I save up the crusts from bread, store them in my freezer, and then, when I have lots, I use my food processor to process a bag of fine bread crumbs that I keep in the freezer to have at the ready to make stuffing at any time. It’s a big time saver, particularly if you frequently prepare roast chicken or turkey dinners. The bread crumbs can be all one kind or a mixture of different breads – white and whole wheat or multi-grain, for example.  In fact, the last stuffing/dressing I made, I used gluten-free bread crumbs.

I know some frown on placing the stuffing inside the turkey but I always do because it gives the turkey such lovely flavour as it roasts.  It takes a little longer for the turkey to cook but I find it is so worth it.

Alternatively, the stuffing (er, dressing, in this case) can always be baked in a casserole or a loaf pan.  I like to use a loaf pan if I am wanting nice slices of the dressing for a turkey platter for, say, a buffet.  It looks neat and attractive and the dressing is easily picked up with a  serving fork.

It’s important that the mashed potatoes be warm, not cold, when making the stuffing.  You want to capture and retain the moisture from the potatoes for the stuffing and it is much easier to mix warm potatoes than cold.  How many bread crumbs needed will depend, in large part, on how wet the potatoes are.  Some potato varieties are quite dry when cooked so won’t need as many bread crumbs as will  potatoes that cook up wet.  Start with a couple of cups of soft fine bread crumbs and, if more are needed to reach the desired consistency, add the crumbs a tablespoon or two at a time. Now, by “fine” bread crumbs, I don’t mean fine as salt like the ones you would probably find on a grocery store shelf or at a bulk food store and which would be used to bread chicken or fish.  For use in stuffing, the crumbs need to have a little coarseness and bulk to them.

I add a bit of celery and onion for added flavour and some chopped apple to give the stuffing/dressing a bit of sweetness.  I also use a small amount of liquid chicken bouillon concentrate as this really enhances the flavour but does not add unnecessary liquid to the mixture. 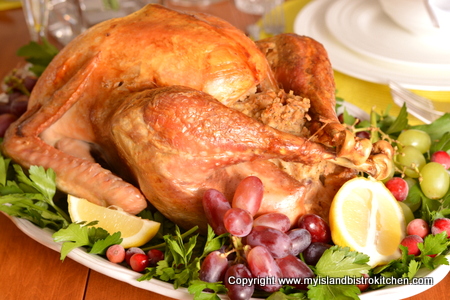 Method:
Mix all ingredients together and loosely fill the body cavity of the  turkey or chicken with the stuffing. Roast turkey/chicken according to package directions.

You may also like this Sweet and Savory Sausage Bread Stuffing recipe from My Island Bistro Kitchen:

Thank you for visiting “the Bistro” today.  If you enjoyed this posting and recipe, please share it on your social media websites. 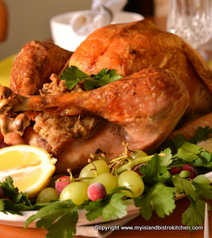