Harvesting my small lavender crop is one of my most favorite parts of summer.  Working among the colorful and beautifully-scented flowers is a rite of summer for me.

I picked the crop this weekend and, since it was such a lovely evening, I used it for the inspiration for my al fresco dining. And, of course, my menu drew its inspiration from these edible flowers as well.

I wanted to keep the tablesetting simple since the table is a small square.  So, I simply gathered together a lot of the flowers into a single stuke shape and tied it with a complimentary shade of wired burlap ribbon.

A simple trim on the ends of the stems formed an even base for the bouquet to stand upright in the center of the table.

I carried the floral and color theme through by tying small bunches of the colorful stems with an airy ribbon. These gave a pop of color and  definition to the white napkins.

I like the clean, crisp backdrop of a white tablecloth. I often tend to  use plain white dishes because food really shows well on them. However, an all white table can be a challenge because it can sometimes look flat and lack definition.  I acquired these white dishes with a double dark rim this summer. They work well in these kinds of situations because they lend some depth and definition to a table.

I used my antique stemmed water glasses to add a bit of height and nostalgia to the setting.

This was my summery Saturday evening  dining table.

Four years ago, I wrote a story on the Five Sisters of Lavender Lane in Kelly’s Cross, PEI. These ladies had a small farm and sold edible lavender.  Unfortunately, they are no longer in business but, by following this link, you can get my recipe for Lavender Honey Ice Cream which was the finale for my dinner last evening.

Is al fresco dining part of your summer?

One of my all-time favorite desserts is Baked Alaska. I first had Baked Alaska on a cruise many, many years ago and I have loved it ever since. Many people think Baked Alaska is difficult to make but I don’t find it is. It does, however, take a little planning and time since it is prepared in stages.  Baked Alaska can be made as a large dessert to serve several or it can be tailored down to serve one or two.  My recipe is for two individual servings, perfect for a special intimate dinner such as Valentine’s Day, or anytime as a nice treat.

There are options for the cake base of a Baked Alaska. Brownies or pound cake are my preferences and they can be either bought or homemade. I like brownies because the dark contrast is eye-appealing with a light-colored ice cream. Whatever base is used, it needs to be cut out with a 2” cookie cutter and it should have a depth of about ½” to ¾ “. Now, at first glance, this might appear to be a rather miniscule dessert but, as you’ll soon discover, the meringue adds a lot of volume to the Baked Alaska. 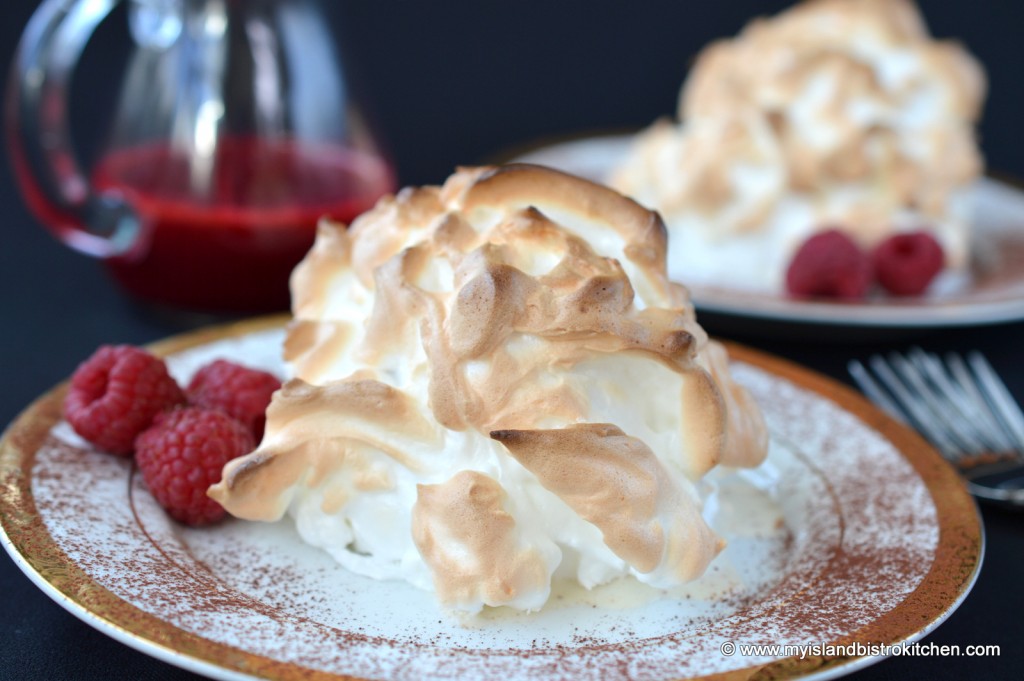 Choice of ice cream is important for the Baked Alaska. Choose a high quality ice cream with a high percentage cream content for this dessert because it will freeze hard. Some of the lower fat or cheaper ice creams tend to be softer and, because this ice cream is going into a 475° oven, it needs to be able to stand up for itself! Any flavour of ice cream of your choosing will work. My favorites are vanilla, coffee, or strawberry. Let the ice cream soften slightly at room temperature for 5-7 minutes before scooping it out.  You want to try and get as perfectly a round scoop as you can because this is what will give the Alaska its dome shape.

It’s important that both the cake base and the scoop of ice cream be frozen super hard so plan ahead to have them frozen for at least two hours or longer before serving time.  I use a couple of small pieces of wooden boards covered with tin foil on which to bake the Alaskas because the boards don’t heat as fast as a metal cookie sheet would which could cause the Alaskas to start to melt down too quickly in the oven.  The idea is to keep the Baked Alaskas as cold as possible.  The Alaskas are only put in the oven for 2-3 minutes solely to tan the meringue. 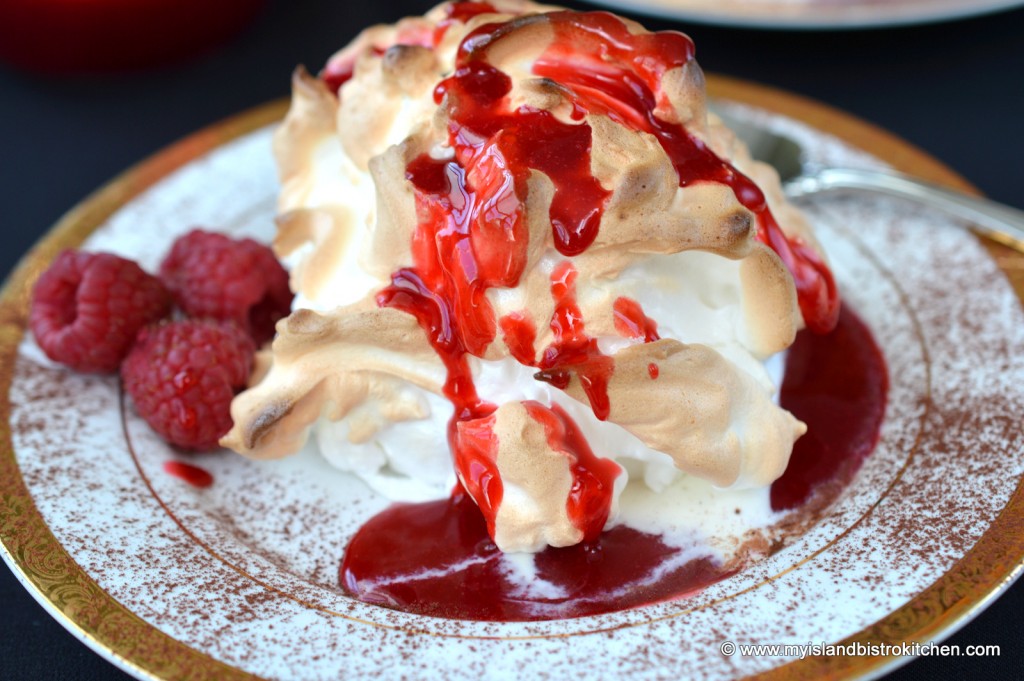 The Raspberry Coulis can be made a day or two ahead and kept refrigerated.

In medium-sized saucepan, combine all ingredients. 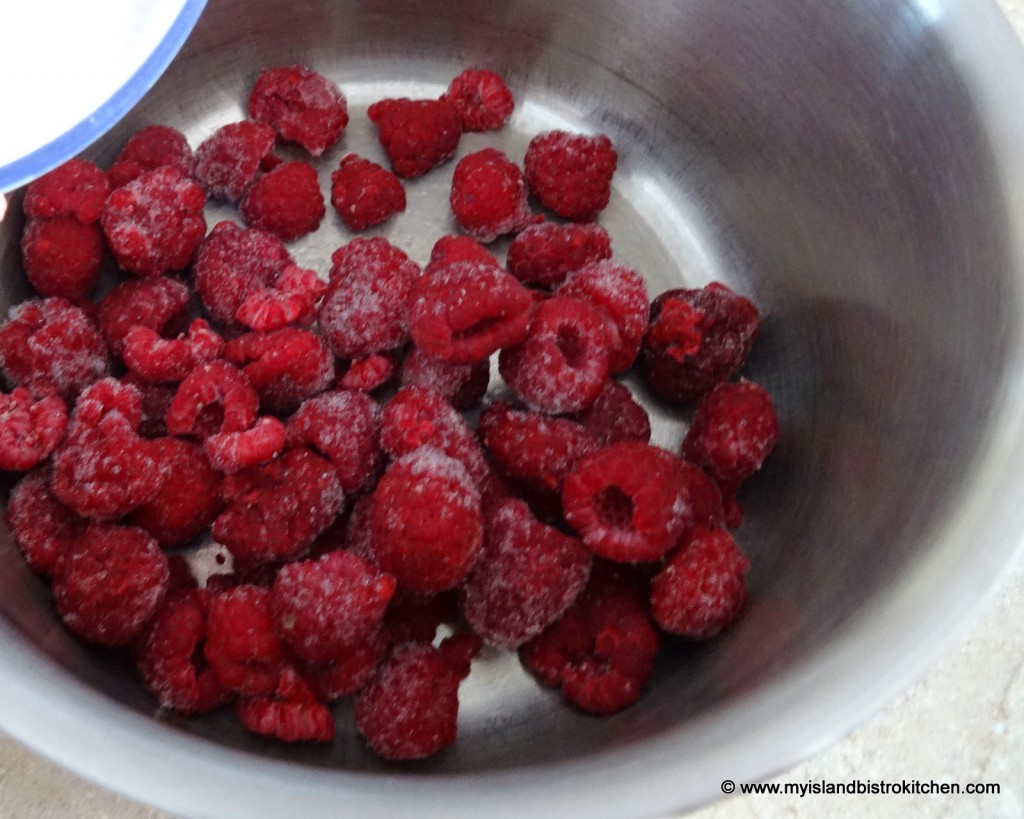 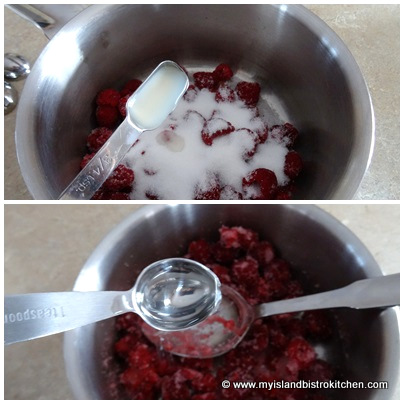 Cook over medium heat, stirring constantly until raspberries have broken down and released their juices. 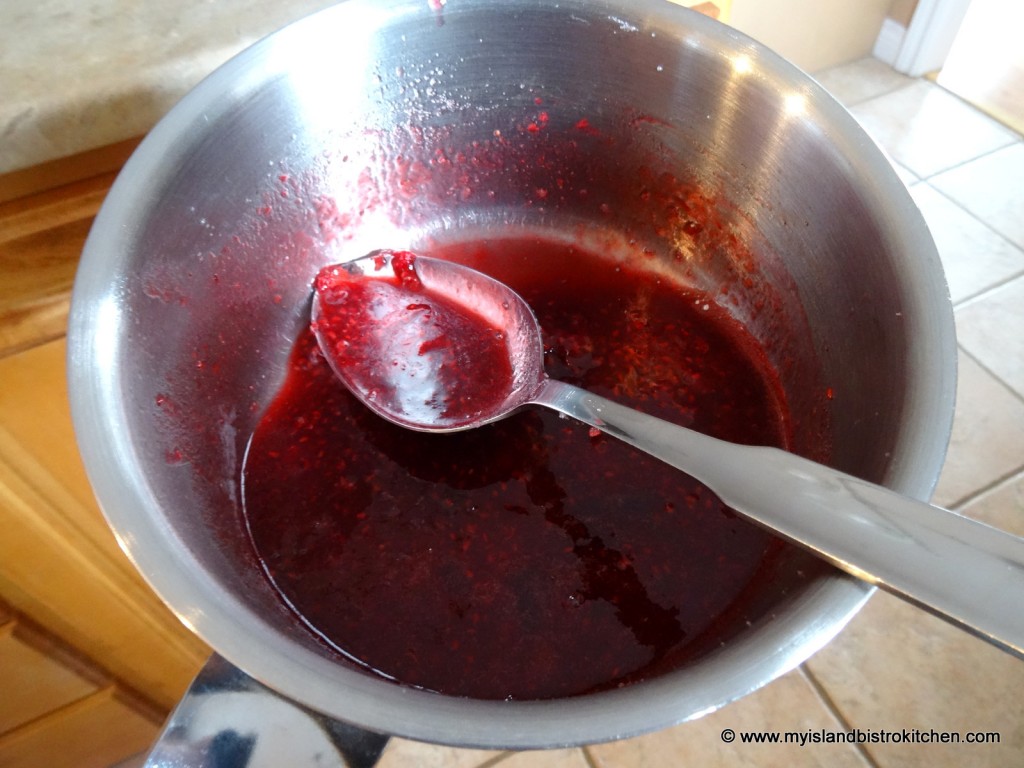 Remove from heat and pour mixture into a fine sieve over a bowl. 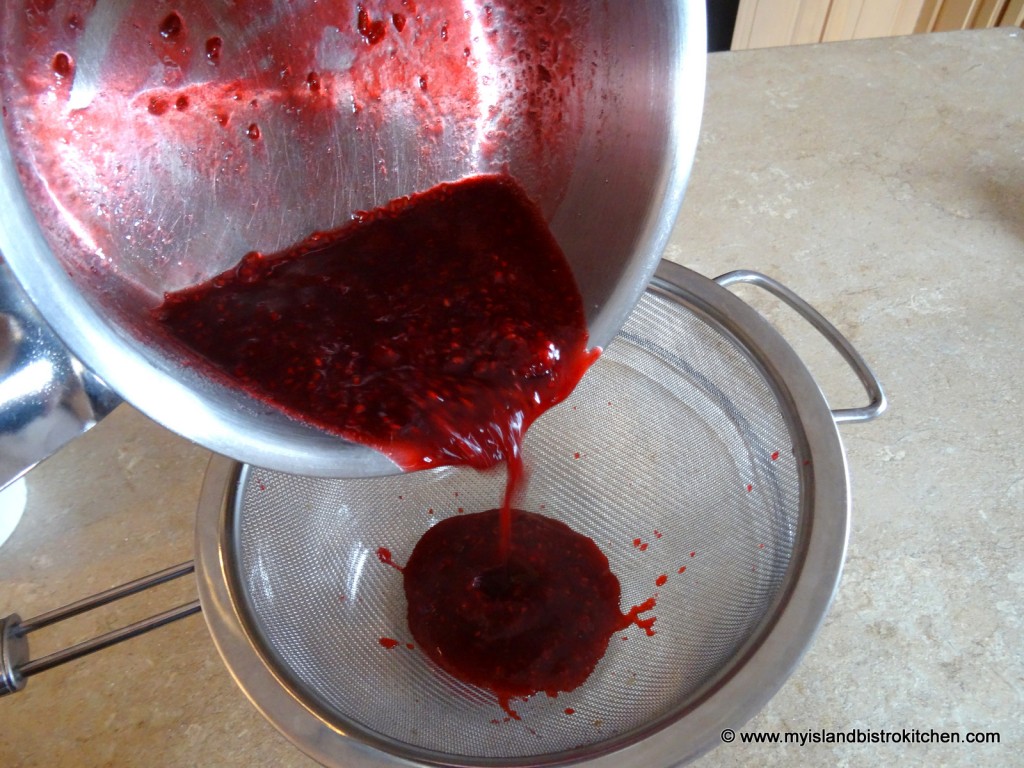 Press mixture with the back of a spoon to extract as much juice as possible. Discard raspberry seeds left in the sieve. 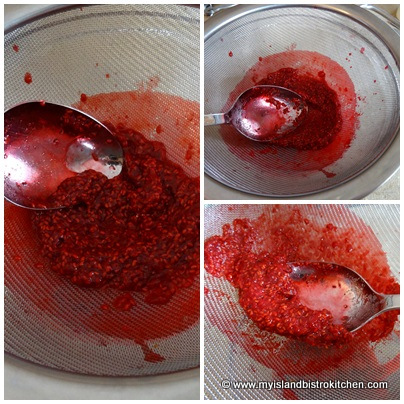 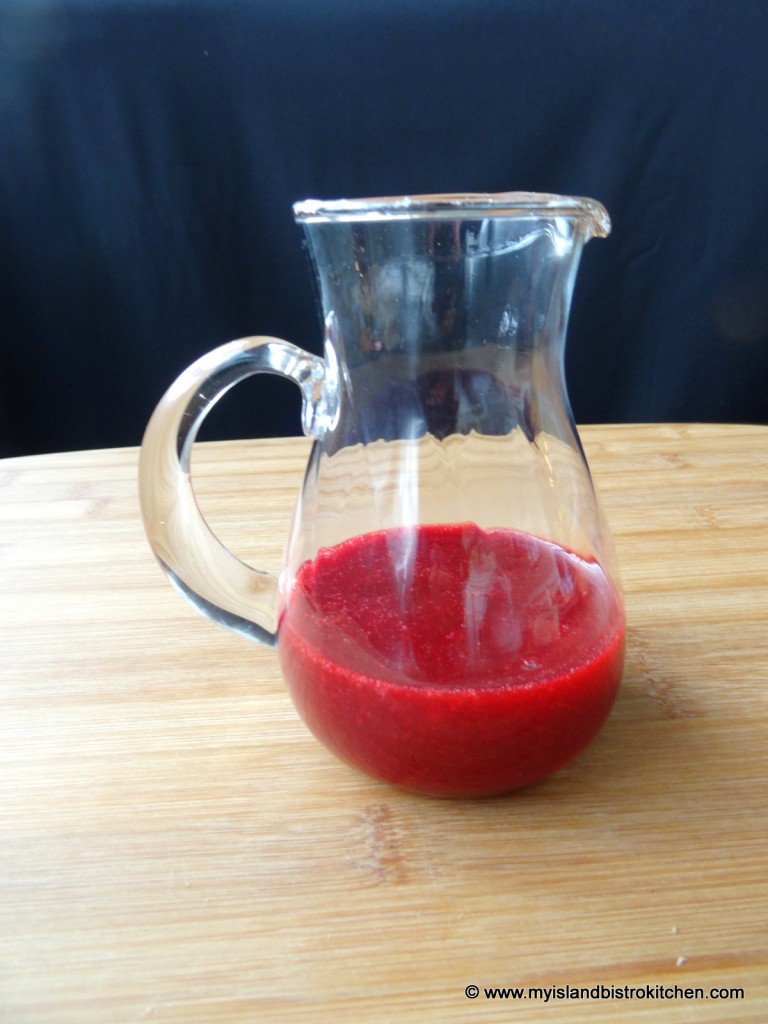 2 pieces of brownie cut into 2” circles and sliced ½“ – ¾” thick.
2 round scoops of ice cream, your favourite flavour

Line a small rimmed baking sheet with tin foil. Using the rimmed baked sheet allows for easy transport to and from the freezer and keeps the Alaska bases from accidentally sliding off.  Place the brownie circles on the baking sheet and top each with a scoop of ice cream. Place in freezer for at least 2 hours, until very firm. 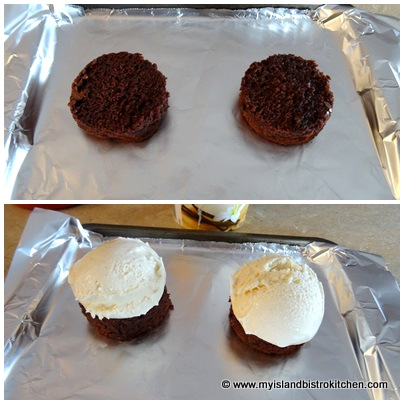 At the same time, cover two small boards with tin foil and place in freezer. 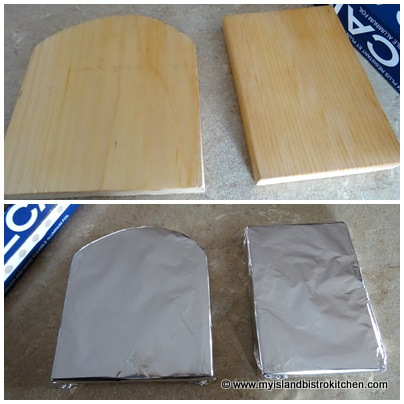 When ready to prepare the dessert, place oven rack about 8” from broiler and preheat oven to 475°F.

In bowl of stand mixer, beat egg whites just until frothy then add the salt and cream of tartar. 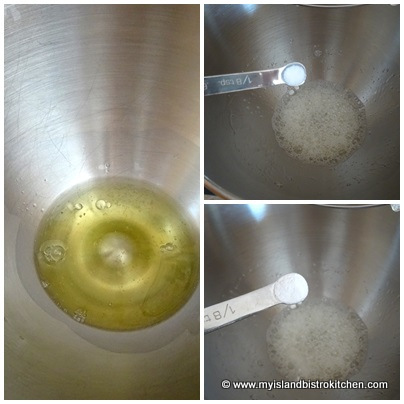 While beating the egg whites, add the sugar slowly, about a teaspoon at a time. 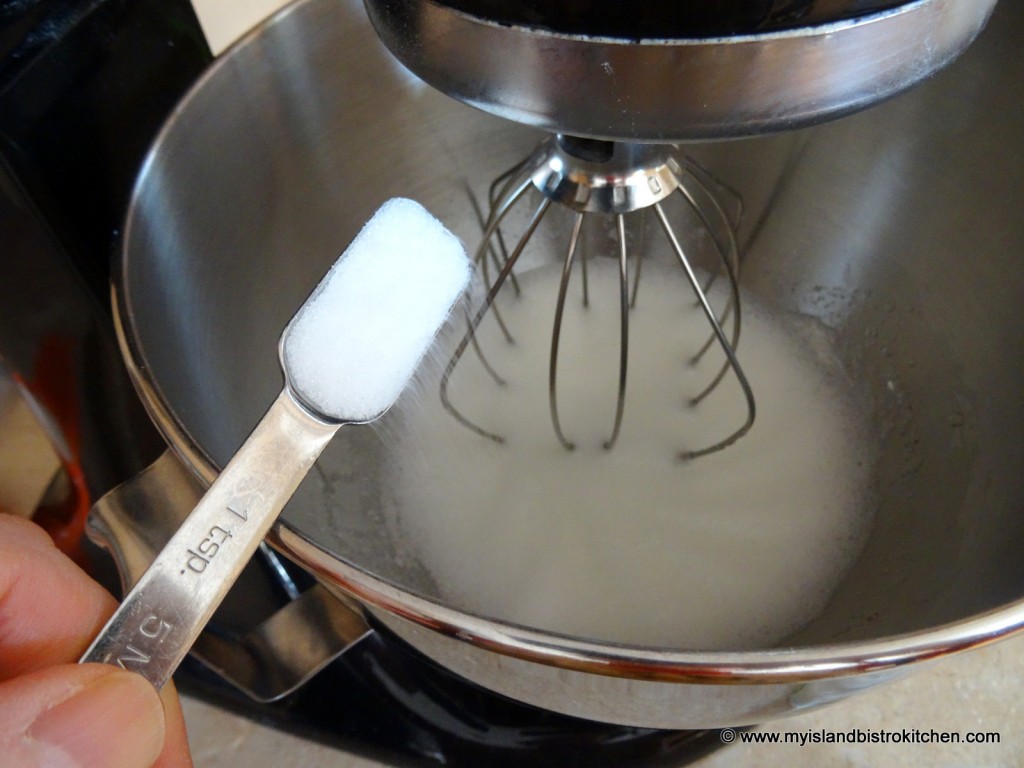 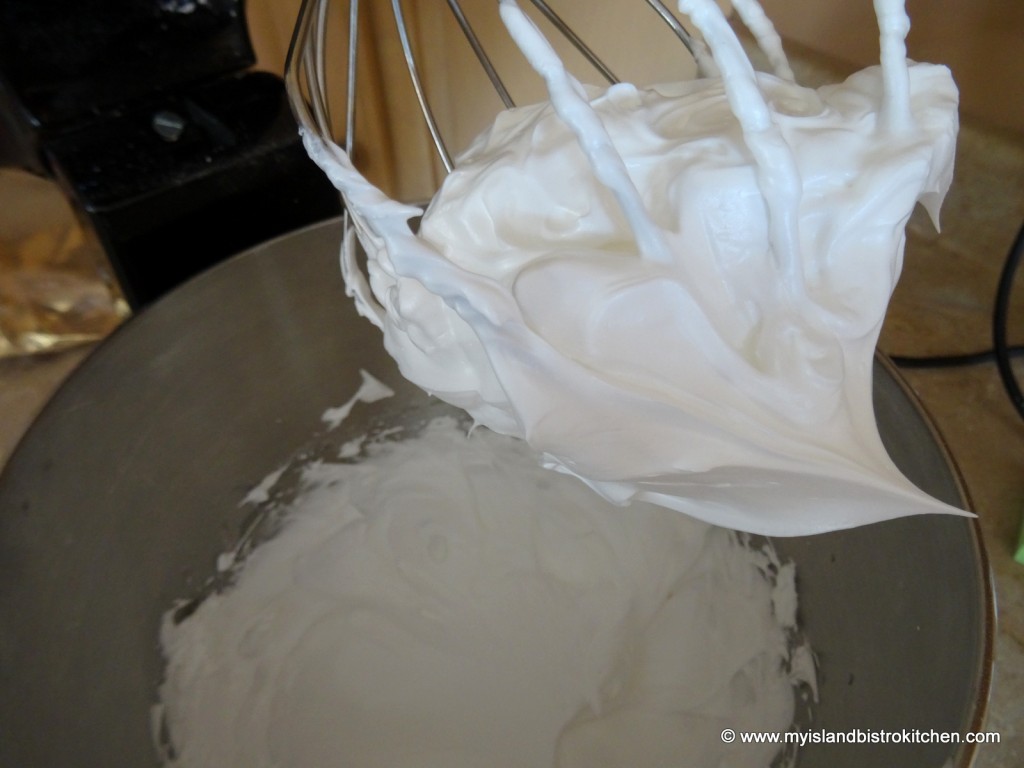 Add the almond flavoring and beat for 10-15 seconds longer. 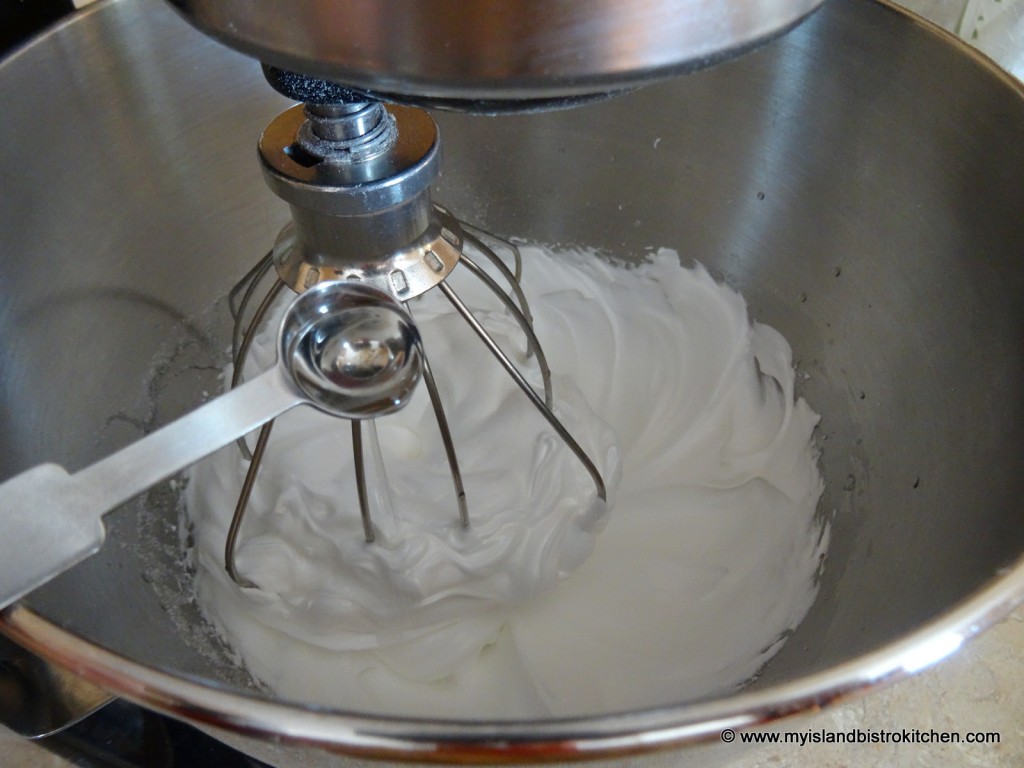 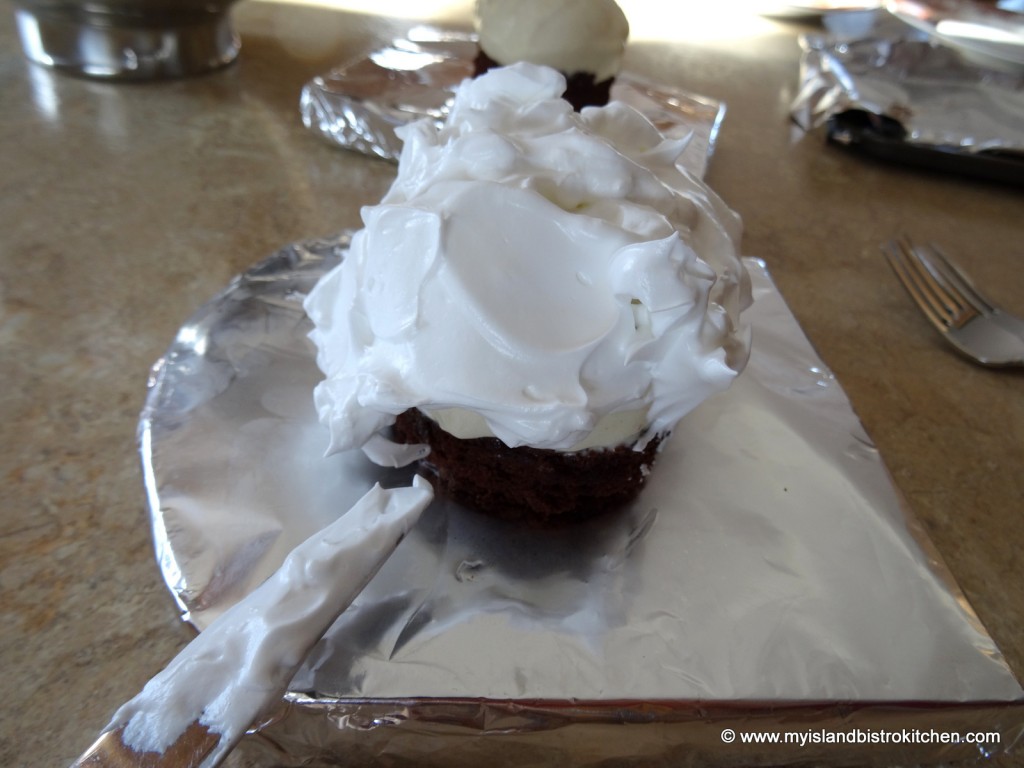 With the tip of a knife, twirl the meringue into decorate tips. 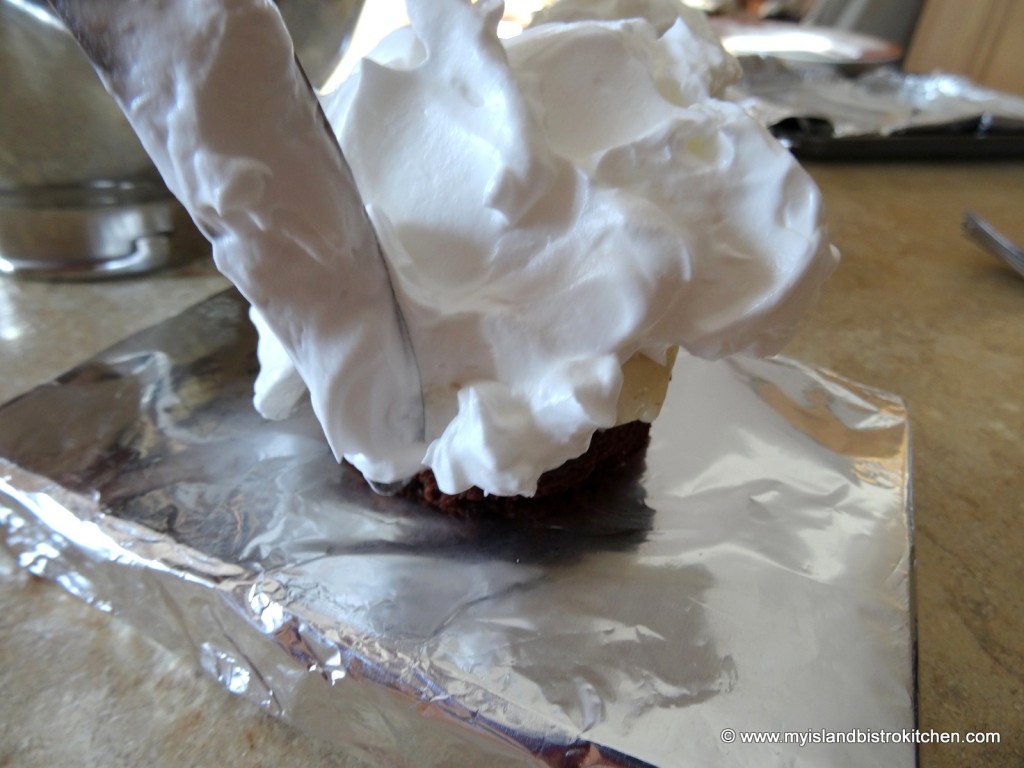 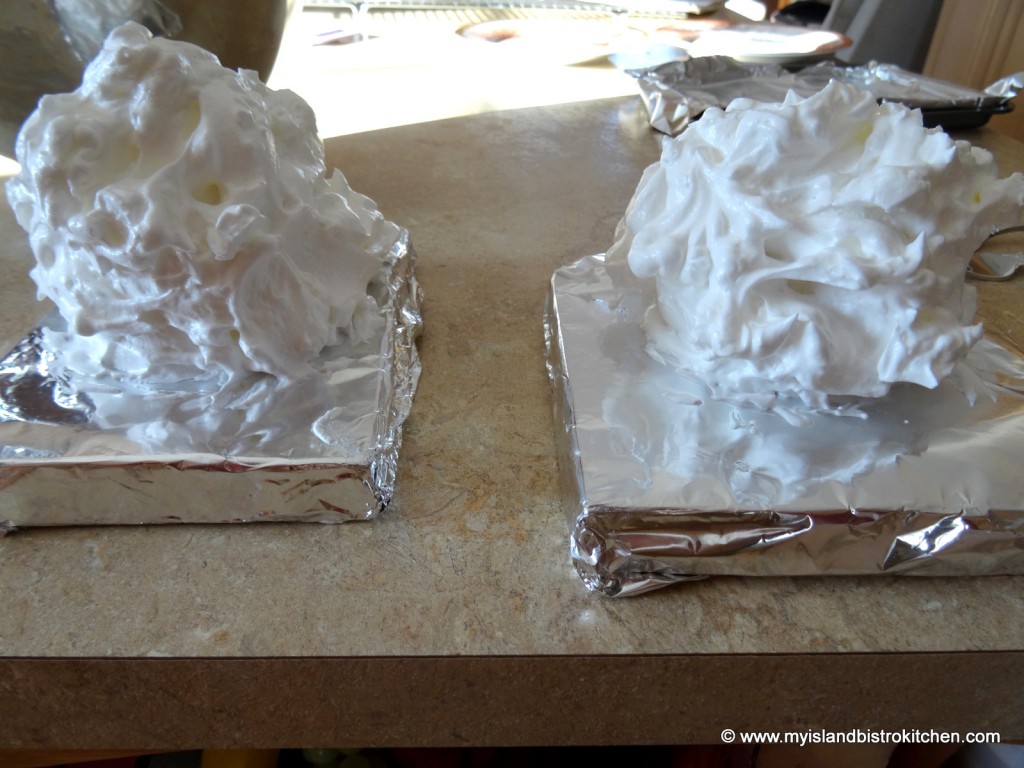 Place the Alaskas on a rimmed baking sheet for ease of transfer to and from oven.  Bake in the pre-heated oven until the meringue browns, about 2-3 minutes.

Remove from oven and plate. Drizzle with Raspberry Coulis and garnish with fresh raspberries. Serve immediately. 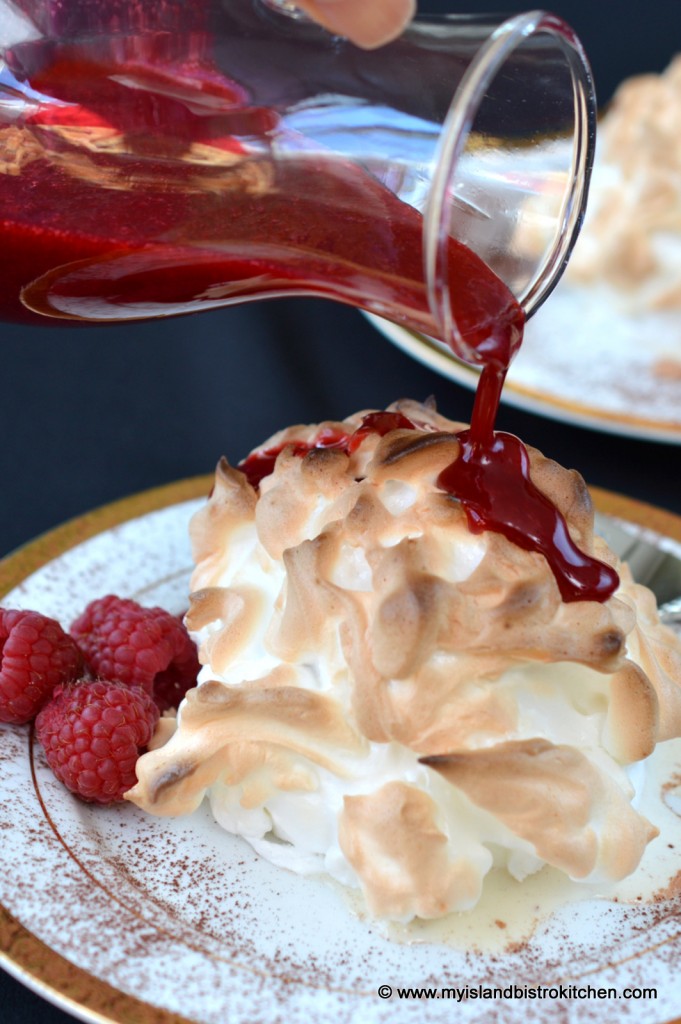 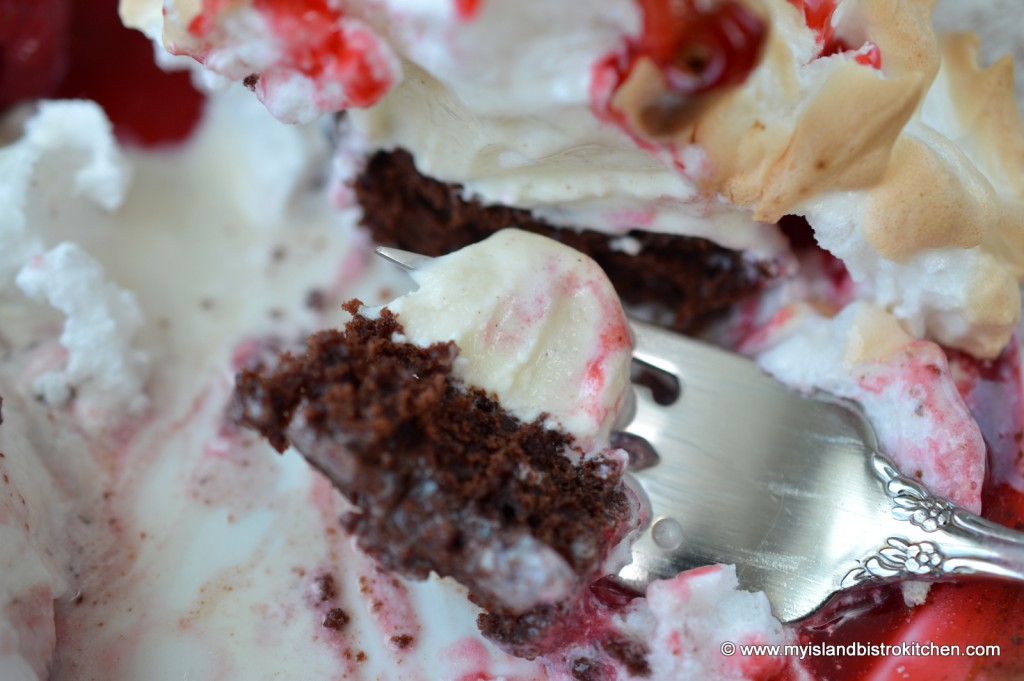