Well, what’s a potato farmer on Canada’s Food Island to do if he has a big warehouse empty and waiting for this fall’s crop to be dug from the rich red soil of Prince Edward Island?  Might as well have a party in that warehouse and may as well include a couple of hundred people and a celebrity chef too!

That’s exactly what potato producer, Alex Docherty of Sherwood Produce Inc., did on September 8, 2017, when he provided the host location for a big potato-themed kitchen-style party.  For anyone who wanted to hobnob with a culinary celebrity, chow down on some good PEI food, and enjoy some fine traditional PEI music, this event offered the perfect way to indulge all three.

Toes, Taps, and Taters is an annual event that is part of the PEI Fall Flavours Culinary Festival.  I had attended this event in 2013 when it was held in the Potato Museum in O’Leary and it was a rollicking good time (click here for the link to that story).  This year, the location changed to a potato warehouse in Canoe Cove on the Island’s South Shore, about a 20-25 minute drive from Charlottetown and organizers pulled out all the stops! Toes, Taps, and Taters is a signature event of the Festival which means that a celebrity chef is in the house as guest host; this year, that was Chef Chuck Hughes who is quite the character! There is never a dull moment when Chef Chuck is at a culinary event!

I arrived at the location around 5:15pm on a beautiful, sunny September evening, one of those late summer days that is just made for a fun party with outside activities.  As folks arrived, they were greeted with the evocative skirl of bagpipes from a lone piper just up the hill from the warehouse.

Of course, Tate, the PEI potato mascot, was on hand and loved to have his photo taken.

Anyone wishing to go and experience digging his or her own potatoes was welcome to board the haywagon and go for a hayride to the potato field.

Take a gander at the size of that little tractor!

Just at the entrance to the warehouse, well-known local chef and cheesemaker, Jeff McCourt from Glasgow Glen Farm, was cooking up a storm and the scent of food cooking over an open fire was an automatic draw to see what he was up to. He brought along some of the Gouda cheese he makes and tantalized taste buds with his Island-style Raclette.

Raclette, of Swiss-German origins, involves heating cheese over an open fire then scraping it with a knife over cooked (usually boiled) potatoes. Well, you had me at melted gouda! And, those sweet little multi-colored PEI baby potatoes!

The potatoes were cooked in cast iron pots over free-standing burning logs and the cheese was carefully melted over similar log fires under the watchful eye of Chef Jeff.

Part of the experience of attending culinary events is to see and learn different ways of cooking and experience traditional foods like potato and cheese turned into a different form.

Why does food cooked outdoors always seem to smell and taste sooooo good?

Upon entering the warehouse, diners were greeted with a glass of Oyster Bay bubbly. They also had the opportunity to sample blueberry ale brewed by Upstreet Craft Brewing of Charlottetown.

Several stations with hors d’oeuvres were set up and folks moved around the stations at their leisure.

Potatoes, of course, featured prominently in most of the hors d’oeuvres starting with Russet Potato Risotto Style.

These two guys were kept busy preparing the tasty Risotta!

With hand pies being a trendy item, the Bacon-Leek Potato Hand Pies served with sour cream and chives proved to be a popular stop on the hors d’oeuvres circuit.

There were, of course, lots of options to try from the PEI charcuterie table.

Zillions of fries are made each year from PEI potatoes so, naturally, French Fries would have to factor in somewhere during the event.  Islanders love their mussels and their fries so Chef Irwin MacKinnon (pictured below) combined the two and served the mussels with roasted garlic aioli. At this point, little did I know that this guy was also in charge of catering the main meal, too!

Yes, these Moules Frites were “right some good”!

There can’t be a good party on PEI without great music and Sheila MacKenzie on fiddle and Norman Stewart on guitar provided lively toe-tapping music throughout the reception preceding the dinner. It was traditional PEI ceilidh style music.

They were also joined by two very talented and energetic step dancers, Alanna and Shelby Dalziel.

Rob Barry proved to be an entertaining MC and he and Chef Chuck Hughes kept the evening lively with lots of banter and audience engagement.

Part of the evening included the swearing in of everyone in attendance as honorary Islanders for the evening which involved the citing of the Potato Oath and, of course, a little swig of, umm, perhaps potato vodka, to make it official. This was followed by a rousing chorus of Stompin’ Tom’s “Bud the Spud”.

Part of the warehouse was transformed into a large country dining room with tables attractively set with red and white checkered tablecloths.

Here’s a closer look at one of the tables.

Can you imagine that this was all taking place in a huge potato warehouse in which, up to three weeks previous, had tons of potatoes in it? It’s true.

And, here was the menu:

As you might guess, the dinner was a potato feast and potato was featured in each of the courses starting with the appetizer which was a delectable salmon-haddock potato fish cake that was served with marinated Island Blue Mussel salad and lemon caper dill. This was plated very attractively. (Apologies for the quality of these photos as they don’t do the meal justice but this was all taking place inside a huge cavernous warehouse that was eating up the light so studio quality photography wasn’t an option. Hopefully, though, the photos will give readers a ‘flavour’ for the menu items.)

And, for dessert, a delectable wild blueberry cobbler was served in a mason jar and garnished with a chocolate-dipped potato chip and whipped cream. Yes, even the dessert had potato in it!

Now, you might wonder how such an elaborate meal could be served in a potato warehouse for some 200 people.  Well, Chef Irwin MacKinnon from Papa Joe’s Restaurant in Charlottetown was in charge of the meal preparation and the mobile kitchen in the photo below is the one he brought into the warehouse to use for the meal preparation.

Can you imagine the amount of organization and coordination that would have been involved to prepare and serve this meal and it was all done in a trailer/mobile kitchen inside a potato warehouse!

The evening ended with a performance by Trinity Bradshaw, an up and coming country music artist from Summerside, PEI.

This event was the full-meal deal – great food and entertainment. It was very well coordinated and the attention to detail by organizers and chefs ensured this was a first-rate event.  The passion and pride of the PEI potato farming community was displayed at every turn.

I have always said two of the best ways to experience the culture of a place are to check out the local food and regional music. Visitors can learn a lot about a place through the food a place produces and the genres that form the local music scene. There were a large number of visitors from off-Island who sought out this event with the farthest coming from Belgium.  Some attendees schedule their entire vacations around the festival and return year after year.  In fact, at my table, there were new visitors from Ontario and repeat visitors from Western Canada and this was their fourth year coming for the Fall Flavours Festival.  This year they attended three culinary events, including the popular Lobster on the Beach event for their third time.  A testament to the calibre of the PEI Fall Flavours events that showcase the wonderful food of this very special food island on Canada’s east coast. 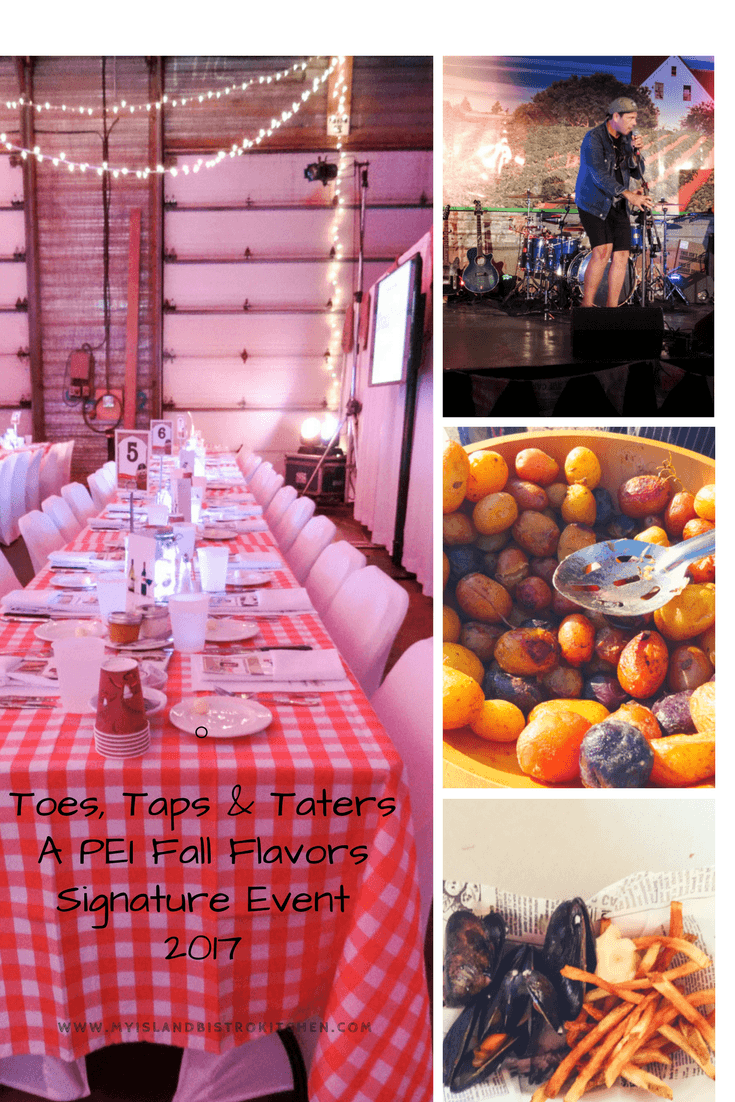