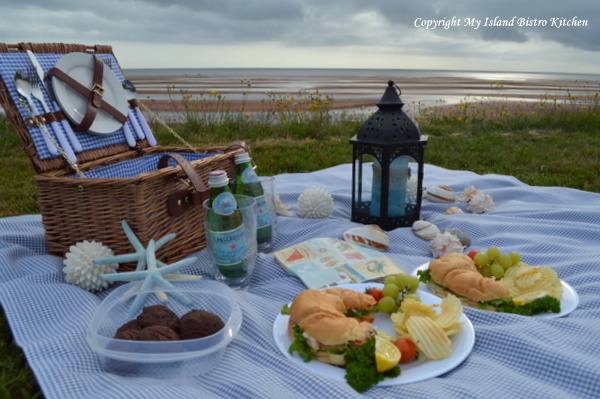 I’ve had a great summer of picnics this year!  Haven’t gone on this many picnics in many years.  I had forgotten how much fun and relaxed al fresco dining can be.  This posting will feature my Labour Day Weekend Picnic but, first, a little trip down memory lane.

One of my favorite summertime memories involves a picnic.  I was visiting a neighbour playmate and we were probably about 8 or 9 years old.  We took a notion one hot summer day that we would have a picnic by the little stream across the road from my friend’s place.  The two of us stood by the friend’s mother at the kitchen counter as she whipped up some gourmet peanut butter and jelly sandwiches, placed them in an old tin school lunchbox, filled a thermos with Kool-aid (anybody remember Kool-aid?), and sent us off on our big adventure to the picnic by the stream.  Off we went across the little country road, down through the cow pasture to a little stream which, at its deepest point was probably all of 4″ or 5″ deep.  We situated ourselves, had our picnic, and probably returned to the house all in the span of about 15 minutes, no doubt ready for another activity!  Yet, we had been on a picnic adventure and made a memory.  That was back in the days when kids played outside all day and found numerous ways to amuse themselves and none of them involved cell phones or computers.

I will admit my picnic adventures have progressed and become a bit more sophisticated.  There are so many options for picnic foods, particularly when it comes to sandwiches – there are traditional sandwiches with any number of different kinds of breads as options, wraps, baguettes, different kinds of rolls, bagels, etc.  For my picnic by the sea today, I have chosen croissants.  They are tasty and have a nice, soft texture.  Because I live near the water and close to a small fishing village that has a fresh seafood market open daily in the summer, lobster was a logical choice for a croissant filling.  The late summer fishing season has opened in Victoria-by-the-Sea on the south shore of PEI so buying lobster at the seafood market means the lobster is really, really fresh.  Take a look at this 1 1/2+ pound lobster that I took home with me to make the filling for the croissants! 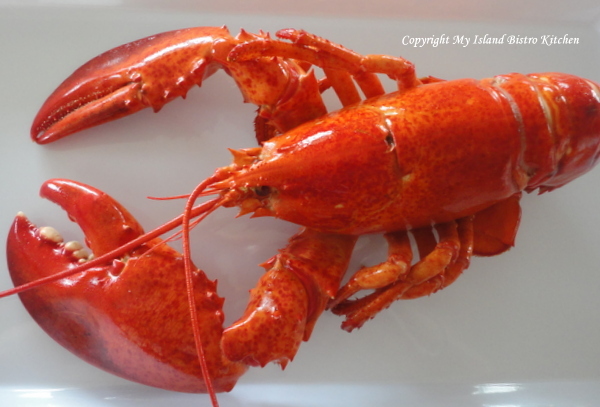 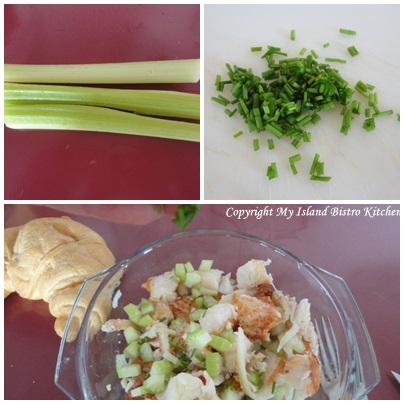 I add a bit of celery, some pepper, some fresh chopped chives, a splash of fresh lemon juice, and some homemade mayonnaise – just enough to hold the meat together and give it flavour.  That’s it, nothing more as I don’t like anything that detracts from that rich lobster flavour. 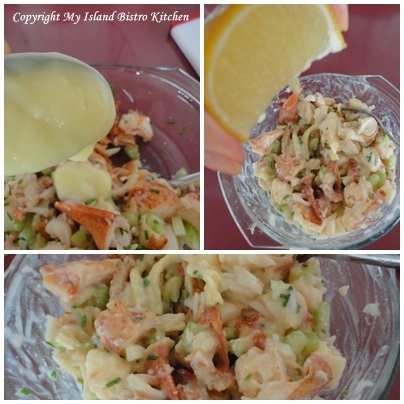 I buttered the croissants, added a bed of fresh lettuce from our garden and then heaped on the lobster filling.  Yes, it was very yummy! 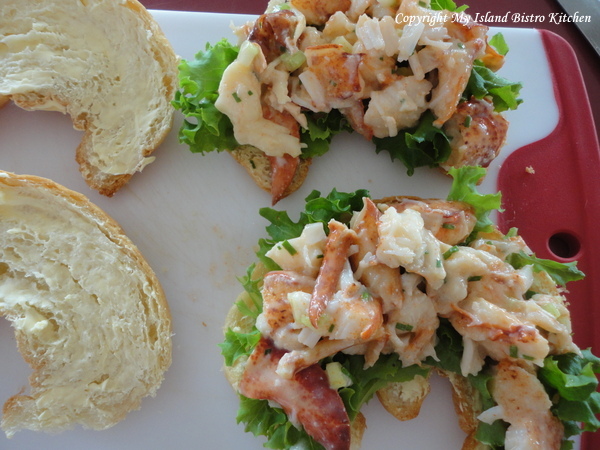 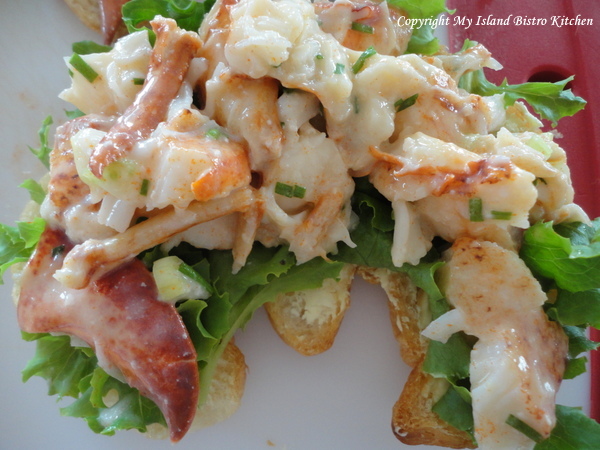 And, this is what I mean about wanting to see nice big pieces of lobster in the sandwich.  Isn’t it mouthwatering and colorful! 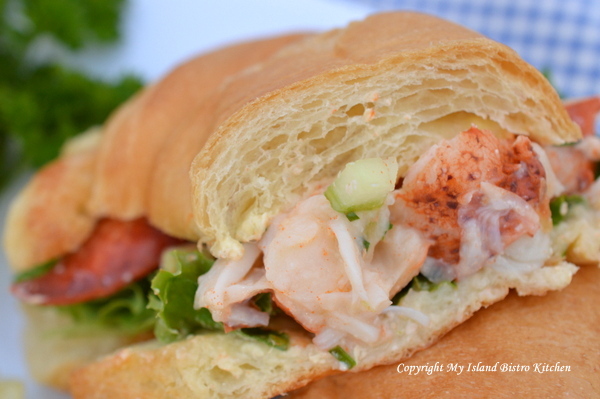 Add some potato chips and picnic fare doesn’t get much better than this, particularly when the picnic location is beside the water.  With something as special as lobster, the menu does not have to be extensive.  Let the lobster star all on its own! 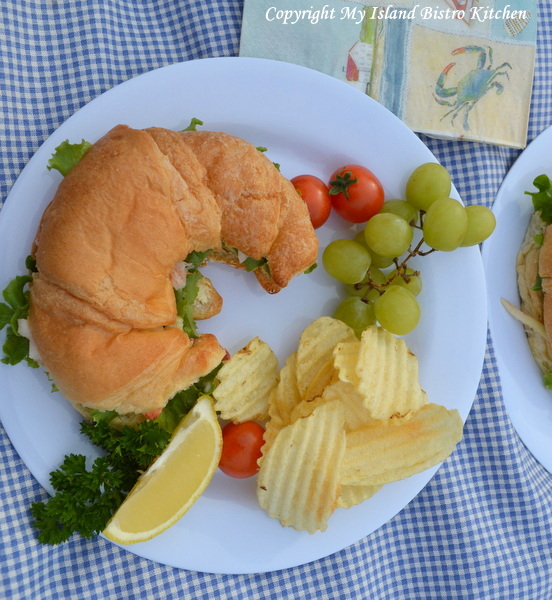 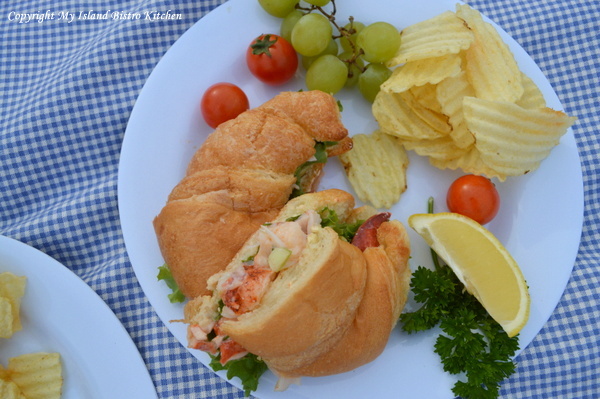 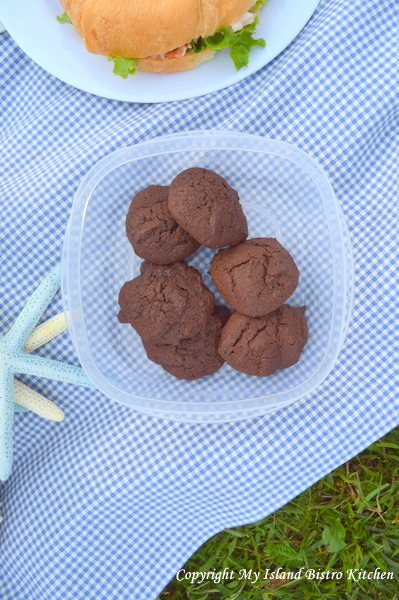 I added some fresh fruit – this time, some green grapes – and the picnic basket was ready to go.

I always like to take along some props to dress up the picnic spread, regardless whether it is at a picnic table or on the ground as is the case here by the beach.  It doesn’t matter whether I am in my dining room setting a formal table or outside, I like to think of setting the stage for a feast for the eye as well as for the stomach.  A few props really can make an ordinary picnic a bit more special. 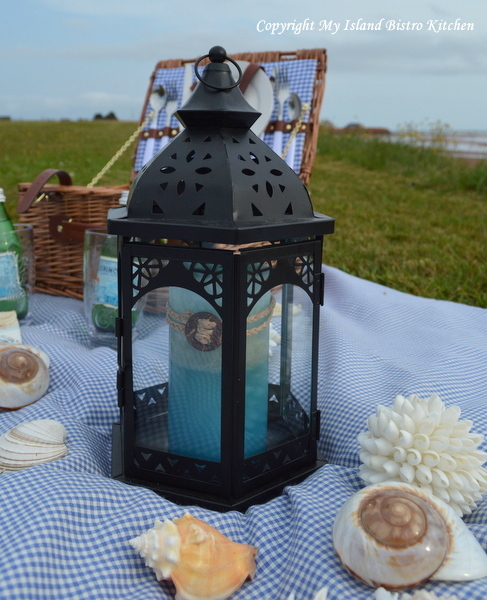 For my seaside picnic, all it took was a blue-checked cloth, a stylish matching wicker picnic basket, a lantern with a blue candle, and some seashells and starfish, to dress up the dining experience. 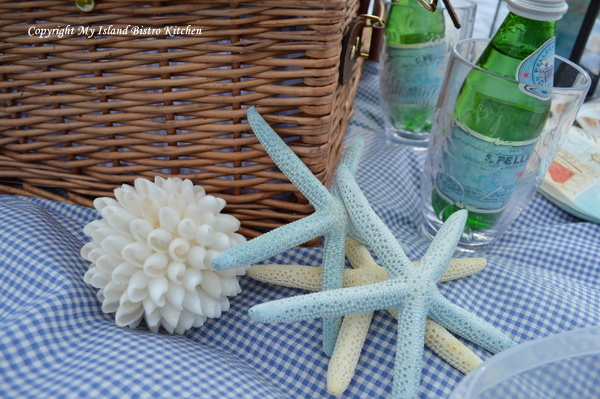 I love the patterns in the pink-red sandbars on PEI.  Our Island beaches are extraordinary – on the south side, they tend to be more the pink-red color you see in the photo below while, on the north side, the sand is more of a soft pink color.  This is definitely a dining room with a water view! 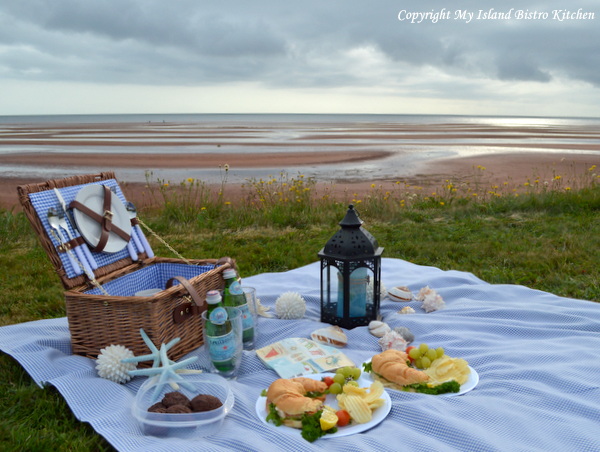 However, the sky began to look somewhat ominous so we thought we had better hurry up and eat in case a rain shower came along and spoiled the picnic. 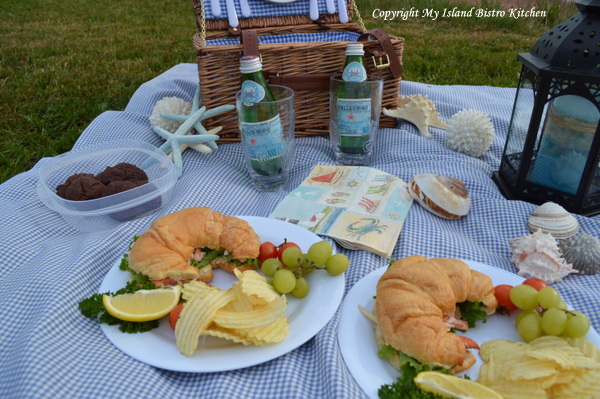 I hope you have enjoyed some of the scenes from our seaside picnic that featured PEI lobster.  Enjoy your Labour Day weekend.

While the heavens opened and poured rain on Victoria-by-the-Sea, PEI, on Saturday, September 29th, it didn’t dampen the enthusiasm that was evident at “Savour Victoria” or the great local food that diners enjoyed throughout the evening.  As Richard LaGrange of the Orient Hotel says, “Victoria hospitality really can make up for a little rain” (well, okay, it really was a LOT of rain!).

This was the last signature event of “Fall Flavours”, PEI’s annual Culinary Festival.  The small seaside village of Victoria on the Island’s south shore proved to be an ideal venue for the event.  Pam Beck, Tourism Development Manager for Central Coastal Tourism Partnership, says Victoria was chosen because of its special qualities and quaintness.  In the summer, Victoria swells with tourists who leisurely stroll around the tiny village of less than 200 year-round inhabitants, visiting local shops and restaurants and watching the lobster fishing boats unloading their day’s catch.  Pam says organizers wanted to make the event “a celebration of Victoria, our Island, and all its beauty and bounty”.  I’d say mission accomplished on that front!


The village is small and neatly laid out in a square shape.  Everything is within easy walking distance and that is a good thing given the inclement weather and the fact that there were five venues for diners to visit during the evening – four for appetizers and drinks and one for dinner.  Victoria does not have any really large restaurants and the ones it does have only operate seasonally.  Some of the Fall Flavours events elsewhere on the Island have used big tents on location but organizers of “Savour Victoria” devised a plan that would use and promote establishments that already exist so that, when people come back to Victoria in the future, the venues will still be there for them to return to.


“Savour Victoria” was produced by Central Coastal Tourism Partnership, a new (2011) organization dedicated to promoting tourism development in the central part of the Island.  Because “Savour Victoria” was classed as a signature event, it meant a celebrity chef was part of the activities.  Bob Blumer, cookbook author (several times over) and creator and host of his own TV shows on the Food Network “Glutton for Punishment”, “Surreal Gourmet”, and “World’s Weirdest Restaurants”, spent the weekend in Victoria overseeing and participating in the Savour Victoria event.  Bob was actively engaged in the preparations for the dinner which featured as much locally produced food as possible and was presented in unique and creative ways that Bob is known for.

Here is how the evening worked.  Everyone first checked in at the Victoria Playhouse where they picked up a gift bag that contained an engraved “Savour Victoria” souvenir wine glass and a map of the Village.  From there, people headed out, donned in raincoats and carrying umbrellas, to the different venues that were serving appetizers and pre-dinner drinks.

Four local eating establishments then opened to serve a sit-down dinner at 7:30pm.  These were the Victoria Village Inn, Landmark Café, Lobster Barn Pub & Eatery, and the Orient Hotel.  When diners purchased their ticket, they selected which of the four venues they wished to go to for the sit-down dinner.

Each of the restaurants served exactly the same meal.  Local chefs from the restaurants prepared the meal and were assisted by chef support from the Culinary Institute of Canada, Charlottetown, PEI.  The featured wines of the evening were all local and came from nearby Matos Winery in St. Catherine’s, PEI.   Just take a look at this great menu that was collaboratively chosen by the local chefs and Bob Blumer:

After sampling the appetizers, it was off to the venue of choice for the sit-down dinner.  I dined at the Orient Hotel.  The Hotel does not operate a restaurant but does open a tea room in the summer months.  In fact, the Orient Hotel had closed its tearoom doors for the season and re-opened especially for this event.  Just look how elegantly this cozy dining room was dressed!

Throughout the evening, Bob circulated amongst the venues, chatting with patrons, and signing copies of his cookbook.  He says he hasn’t been on the Island since a memorable bike trip in his teens so he jumped at the opportunity to come back.  Says Bob, “During my too-short stay, I fell in love with Victoria-by-the-Sea, and with all of the incredible/eccentric/gregarious people who live there.  Dinner was a real community effort (with some imported talent from Charlottetown) – and the community really rocked it.”  Asked what the most memorable thing is that he will take away from his Island experience, Bob tells me, “the camaraderie, the lobster and, of course, the incredible beauty of the land.”  Great endorsement, Bob!

Pam Beck says organizers aimed for a reasonably-priced event ($85/pp) for sampling four appetizers, drinks, a four-course sit-down dinner, and wine.  The event was sold out – all 150 tickets — and Pam says it was about 50/50 split between Islanders and tourists.

This was a very enjoyable evening and it really makes me appreciate the wonderful foods we produce right here on PEI.  I asked Richard LaGrange what, from the perspective of a host restaurant, he thought made the event so successful – it was, after all, a huge undertaking to carry out this kind of event using eight small venues, none of which have large kitchens.  Richard says, in his view, the event’s success was due to the team effort that went into it, the entire community coming together, and the attitude and professionalism shown by members of the Culinary Institute of Canada.  Richard says the most memorable aspect of the “Savour Victoria” experience for him was watching the chefs and the other food staff working together so seamlessly and guiding the rest toward a common goal.

I think this event may be a catalyst for Victoria to consider hosting similar events in the future.  They proved they can do it!  Richard LaGrange sums it up best when he says:  I would hope that the Islanders who attended and who hadn’t been to our village for a while will have been reminded of all the reasons people flock to Victoria, and that those who were visiting us for the first time had their appetites whetted and will be back for seconds.”  Hmmmm, “seconds” are good – yes, I’ll have another one of those yummy, savory lobster cupcakes, please!