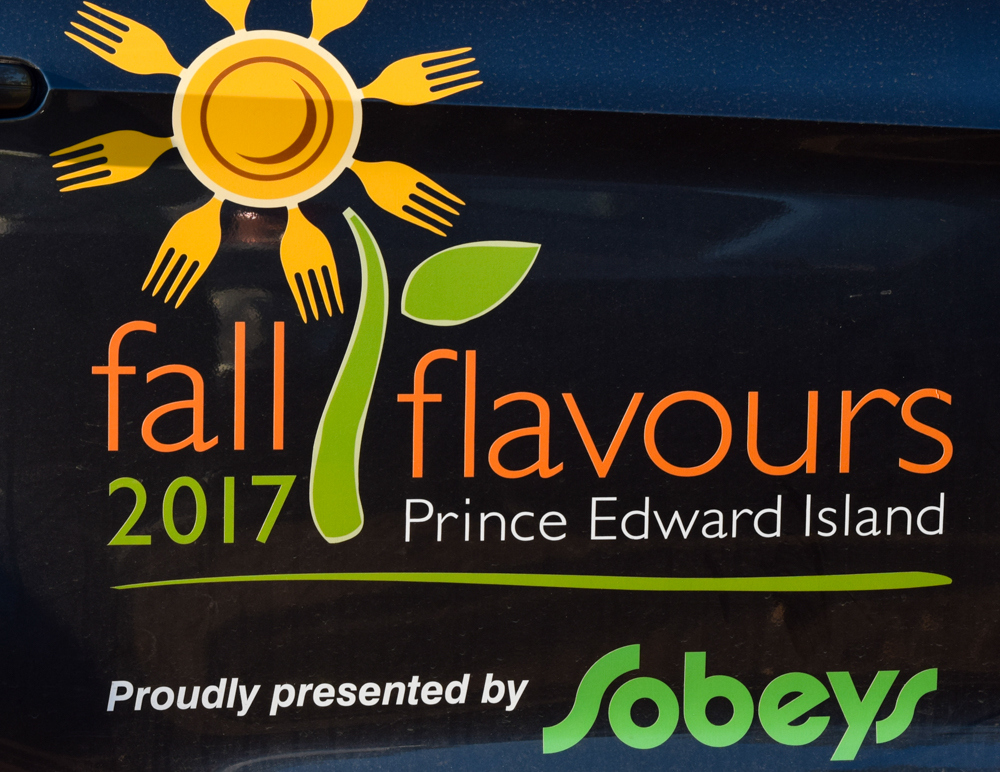 The month-long PEI Fall Flavours Festival, held annually each September, offers visitors the opportunity to delve into local culture in a unique and tasty way through attending culinary events at various locales across the Island. Originally started as a 10-day festival that could extend PEI’s short tourism season into September, the Festival has grown into a full month of a wide variety of culinary events for every taste.  A popular Festival with foodies, visitors travel great distances and several return each year especially for the Festival.  Now in its 10th year, the Festival puts local food at the forefront of the visitor experience and, in so doing, also builds and strengthens collaboration between food producers, chefs, restauranteurs, local communities and, more broadly, the Island tourism industry.

The PEI Fall Flavours introduced three new culinary events in 2017 – Taste of Georgetown, Taste of North Rustico, and Taste of Tyne Valley. With a view to getting visitors out in to the more rural areas of the province closer to the local food sources, visitors were drawn to experience the different regions of PEI and they also had the chance to connect more directly with food producers and local chefs.

A growing trend amongst the foodie tourist population is the interest in incorporating good local cuisine and culinary experiences into their travel adventures.  The evolution of food and drink festivals are a driving influence in the culinary tourism aspect of vacation travel. While products like PEI oysters, for example, are shipped all over the world where anyone can have access to them, those consumers will not have the full cultural experience that they can get from eating oysters at a PEI Fall Flavours event. Such events allow consumers to interact directly with the oyster grower who farms the product just up the road and who is the one actually shucking and presenting the oysters right before event attendees. And, of course, it goes without saying that the closer you taste the food to its origins, the fresher and better its taste and the more personal connection you have with the food.

For those who want to experience authentic local culture, there is no better way than to attend a culinary festival, like the PEI Fall Flavours Festival, where regional fare can be sampled and local hospitality and music enjoyed.  These three components are the essential ingredients of a true local food and culture experience of a place.

This was none more evident than with the recent “Taste of Tyne Valley” culinary event.  This event was also a community-building activity for the Tyne Valley community, located about 20 minutes west of the City of Summerside.  Local food producers and the three restaurants in the heart of Tyne Valley worked collaboratively to provide event goers with an authentic food experience complemented by West Prince hospitality. When we speak of authenticity in terms of food, we are talking about a food trend that involves local fresh food that is simple, natural, and has roots and history in an area. So, when we think of the Tyne Valley and surrounding environs, in particular, we think of local foods with a long history in the area – foods such as oysters, mussels, beef, potatoes, and wild blueberries, all of which were included on the event’s menu.

Organizers report that 110 people attended the Tyne Valley event and, for the first time that I’ve attended a Fall Flavours event, I think the locals may have outnumbered the tourists! When a tablemate, a resident of Tyne Valley, was asked what the population was, she looked around then, with a smile, jokingly said “they’re all here tonight…, well, at least 80% of them”! There were certainly some off-Island visitors at the event, too, and they got to mix and mingle with the locals while enjoying some fine Island foods.

The evening began with a gathering hour in a large tent where Valley Pearl Oysters served up steamed mussels and raw oysters.

The mussels were steamed just outside the tent and the oysters were shucked by the oyster growers as people passed through the line. The food just doesn’t get any fresher than that!

Mussels and oysters are popular PEI foods so there was always a steady line-up for them.

Because food and music are a common combo at PEI gatherings, local music also plays a part in virtually every Fall Flavours Festival event.  During the gathering hour in Tyne Valley, visitors were treated to music provided by local area musicians, Spencer Phillips and Ellen MacQuillan.

The format of this event was part roving feast and part sit-down table service meal.  The center of Tyne Valley has three restaurants, all located in close proximity to each other.  After enjoying the mussels and oysters, patrons took their appetizer “passports” and began the short stroll to the three participating restaurants – Backwoods Burger, Dillon’s, and Tyne Valley Tea and Company.

The benefit of involving three local restaurants and having event attendees visit each one to sample an appetizer is that it exposed the restaurants to visitors who, if visiting the area, might otherwise have chosen only one restaurant at which to dine. Diners could choose the order in which they visited the restaurants.

Backwoods Burger (which always reminds me of an English pub), pictured above,  served a slice of their delectable potato and bacon pie which was beautifully presented.

Layers of PEI potatoes are the main ingredient in this delectable pie.

Dillon’s (seen in photo above), a local pizzeria, served the perennial favorite appetizer of bacon wrapped scallops which they served on a bed of greens.

Dillon’s also served a choice of wine or punch with their appetizer.

The Tyne Valley Tea and Company, a small tea room that opened in 2016, served an Asian-inspired appetizer nestled in a Wonton dish.

This colorful appetizer featured carrots, garlic, and green onions with a cucumber sweet chili sauce, with many of the ingredients sourced locally from the gardens of the nearby Doctor’s Inn.

Once everyone had made their way back to the tent, dinner service began, family style, at the long communal tables.

The main meal was prepared by guest Chef Jesse Vergen who is chef/co-owner of Saint John Alehouse and owner of Smoking Pig BBQ, both in Saint John, New Brunswick.

A Top Chef Canada All Star, Chef Jesse is no stranger to culinary challenges and, as he puts it, curve ball competitions; in fact, he’ll tell you he thrives on them.  With no existing or mobile kitchen onsite from which to serve 110 meals, Chef Jesse, in his words, was “rocking it out” from the back door of the little pizzeria and convenience store next to the event location!  This is where I caught up with him putting the final touches on the main meal.

This was followed by large trays bearing the sliced brisket in the center surrounded by large clam shells filled with mushroom purée, butter-poached bar clams, and stout mayonnaise. These were broiled in the local pizzeria’s pizza oven and were, as Chef Jesse says, “a take on a classic Coquilles Saint Jacques but with a Tyne Valley twist”.

The brisket had been smoked slowly for 14 hours in a traditional barbeque pit with applewood and Chef Jesse says this long slow cooking process turned the meat into a melt-in-your mouth-like-butter texture.

Many hands make light work! Great motion and energy in the photo below!

As dessert was arriving, the energetic Gordie MacKeeman and His Rhythm Boys band took to the stage providing lively toe-tapping music.

This award-winning band has toured extensively, nationally and internationally. Members of the band are Gordie MacKeeman, Peter Cann, Thomas Webb, and Jason Burbine.

Dessert was prepared in the small kitchen of the Tyne Valley Tea and Company just across the road from the event location.  Served in the trendy mason jars, this tasty creation was a take on the traditional English Eton Mess dessert.

The layered dessert featured Lennox Island blueberries, along with crumbled meringues and scones, all topped with Earl Grey-infused whipped cream. A small ginger cookie, shaped like a teapot, garnished the dessert.

There is no doubt this was a community-building event for the Tyne Valley area and the passion of the local people, restaurant owners, and others who participated, was evident.  Carol Rybinski, owner of the Tyne Valley Tea and Company says the PEI Fall Flavours concept was “right up our alley – locally-sourced dishes and a shared community experience”.

Chef Jesse concurs, saying he was impressed with the event and community collaboration to pull it off.  He says he considers it an honour to have been asked to participate in the Tyne Valley event. One thing is certain – there was lots of fun and laughter to go along with all that fresh local food!

For the entire month of September, visitors to the PEI Fall Flavours Festival can take advantage of all that this amazing small Island on Canada’s east coast has to offer – sample locally-sourced fresh food prepared by talented chefs, listen to lively local music, mix and mingle with the locals, and discover beautiful vistas from one end of PEI to the other. If you’re a true foodie, there is no better time to visit PEI than in the month of September which is filled with dozens of different culinary events offering something for every taste.  PEI has earned a reputation for excellence in food production and is now seen as an authentic food destination. There is a reason why PEI is known as Canada’s Food Island and events like “Taste of Georgetown”, “Taste of North Rustico”, and “Taste of Tyne Valley” prove it.

To read stories about other PEI Fall Flavours events I have attended, click on the links below: 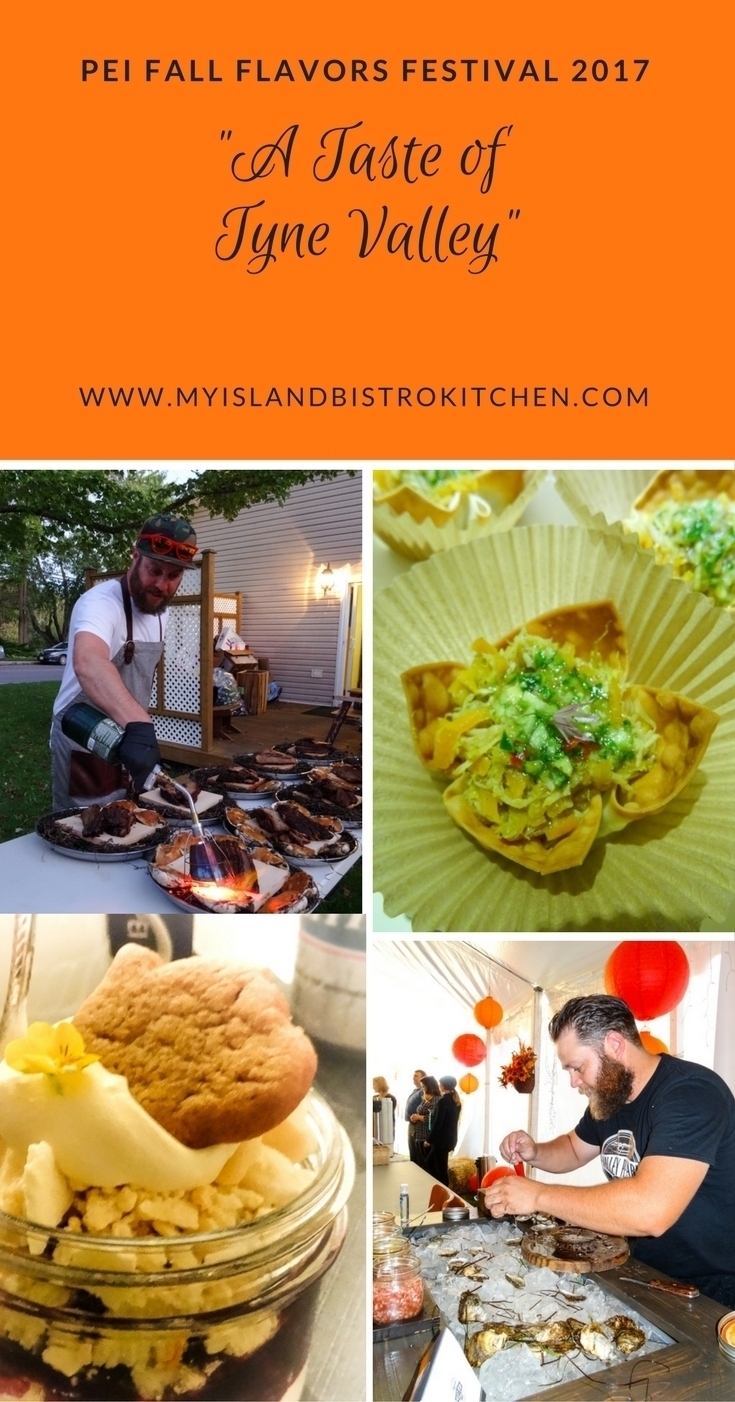