I was recently in London and, of course, a visit to London for me without having afternoon tea would not be complete! On each visit, I aim to have tea at a different venue. 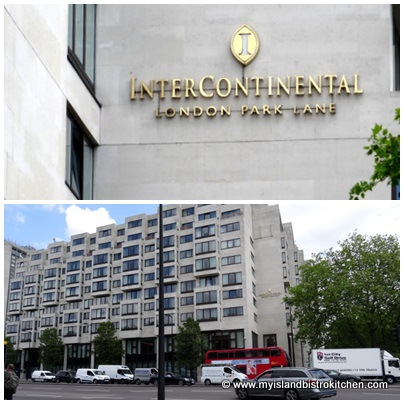 My travels this visit took me to the Intercontinental London Park Lane Hotel which occupies a prominent and historic location near London’s Hyde Park, in the heart of Mayfair. Afternoon tea at the Park Lane is served in the Wellington Lounge which occupies the former site of 145 Piccadilly that was Her Majesty the Queen’s former childhood home. This location remained her home until 1937 when the family moved to Buckingham Palace. The home itself was destroyed during war. Between 1968-1975, the Intercontinental London Park Lane Hotel was constructed on the site. 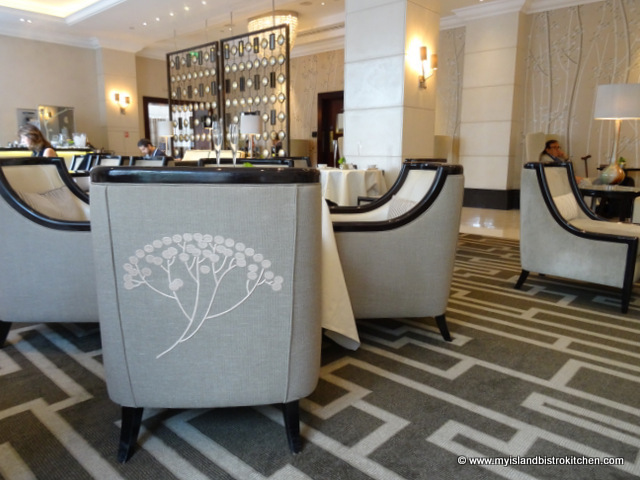 The Wellington Lounge of the Park Lane, in its taupe and white hues, is elegant and sophisticated, yet casual. Comfy chairs invite a time of leisure lingering over tea. Three menu options are available for afternoon tea: The Market Garden Tea, the Royal Tea, and a seasonal tea which changes regularly throughout the year. We experienced the new “Scents of Summer” Afternoon Tea that boasts a menu inspired by the beauty of British summer time. The menu had only been introduced four days prior to our arrival and will be available throughout the summer season until September 27, 2015.

Our afternoon tea was as much a treat for all the senses as it was for the palette. Unhurried, my Mom and I spent a most enjoyable three hours savoring the creativity of Executive Chef Ashley Wells and Edward Bodenham of British Family Perfumers, Floris London. We found the servers to be knowledgeable, attentive, and accommodating without being intrusive. Rather than simply delivering the customary three-tier server with all the food on it at once, the Scents of Summer was served in individual courses. For each course, Luigi, Senior Associate, Tea and Coffee Expert, explained the food, the best order in which to consume items, and suggested appropriate tea pairings to complement the food. 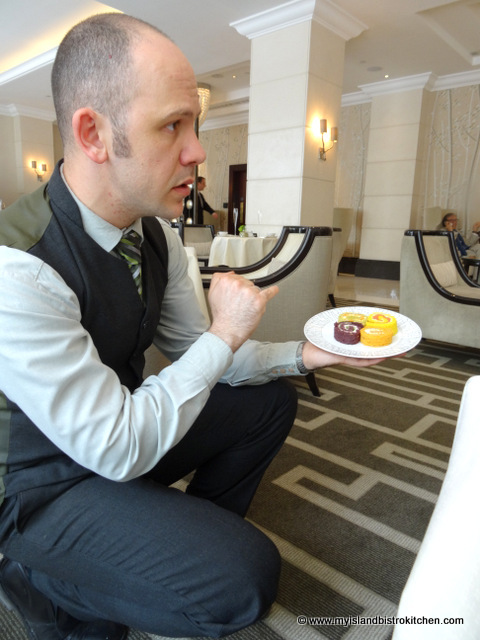 We first began with a palette cleanser of rose pearl wheatgrass, bushe berries, gooseberry, and citrus mist.  This grass-based starter, served on a small tuft of grass, was a tribute to the earth.

This was followed by a selection of four different, colourful, and tasty pinwheel/scroll sandwiches presented on the plate in a design that resembled the shape of a butterfly.

Luigi recommended the order in which to most effectively consume the pinwheels starting with a light rose-pickled cucumber and Mascarpone on Peruvian bread followed by the more hearty salmon and Bergamot served on lemon bread. 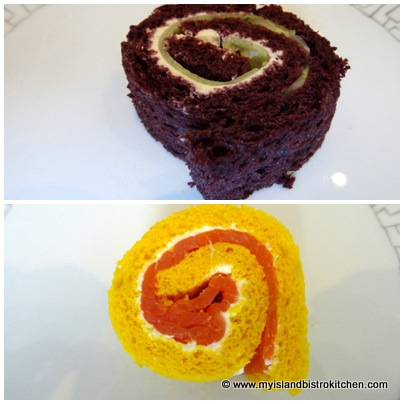 We then progressed on to a slightly spicy pink peppercorn and thyme chicken pinwheel on tomato bread and, finally, the honey roast pumpkin with crumbled feta on spinach bread. 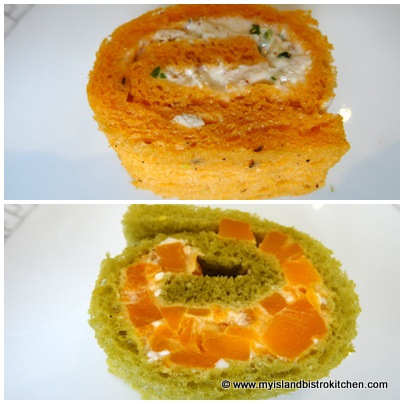 The tea we enjoyed with this course was Second Flush Darjeeling which some claim to be the ‘champagne of tea’.

The server plates were deftly removed and were replaced with the elements of the course that featured scones. Dainty buttermilk scones, fresh and still warm from the oven, were brought to the table and placed on the server along with small dishes of Devon clotted cream, wild strawberry jam, lemon curd with pink peppercorn, and Bergamot-infused Earl Grey butter. 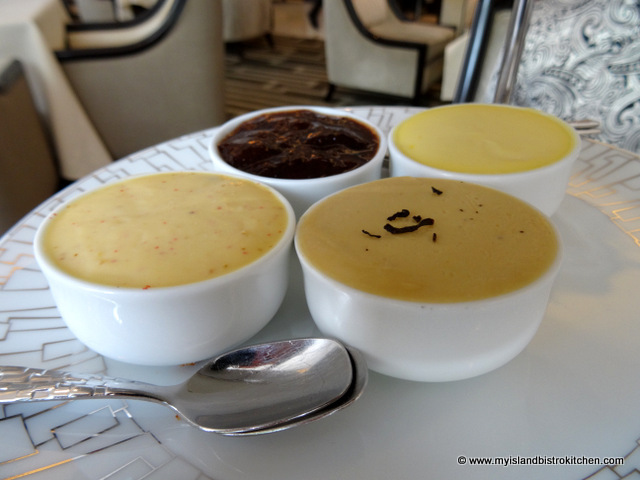 This was accompanied by a spritz of a citrus-based spray as a “sensory” introduction to the scones course. 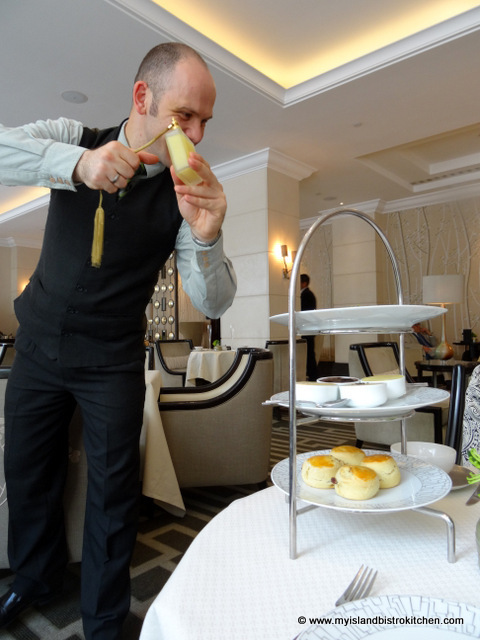 The scones – two plain and two sultana — were the most tender scones I have ever tasted! 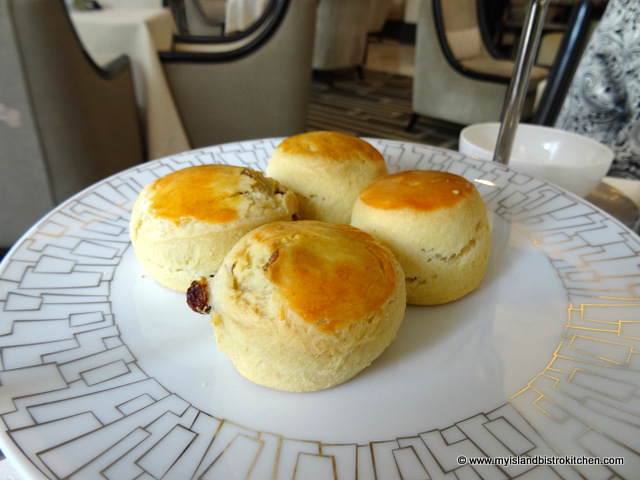 Luigi recommended to first spread the jam on the scone half, then top it with the clotted cream. Literally, these scones melted in the mouth! 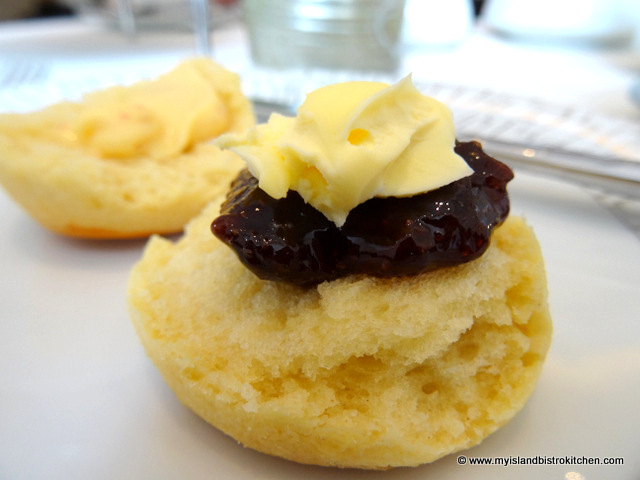 The recommendation of tea to pair with the scones was a full body Earl Grey Assam Tea. I must admit I have never been an Earl Grey tea fan and I usually put milk in my tea. However, Luigi recommended no milk and I found this tea was indeed a fine complement to the scones course. 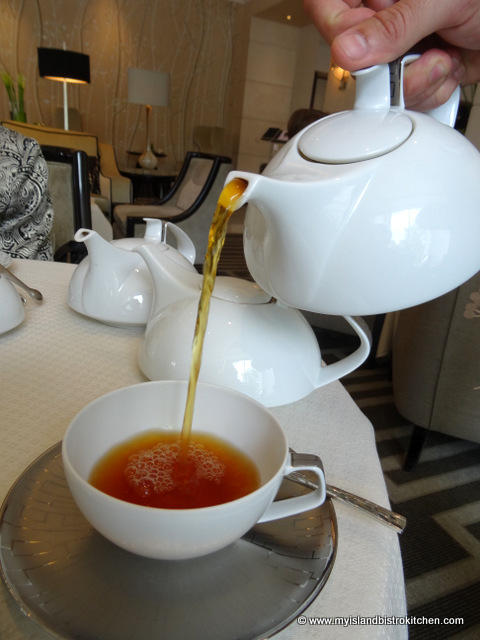 Then came the pièce de résistance – the selection of sweet indulgences. Truly, these were nothing short of a work of art in the presentation that was only surpassed by the sublime melange of flavors, scents, and tastes. 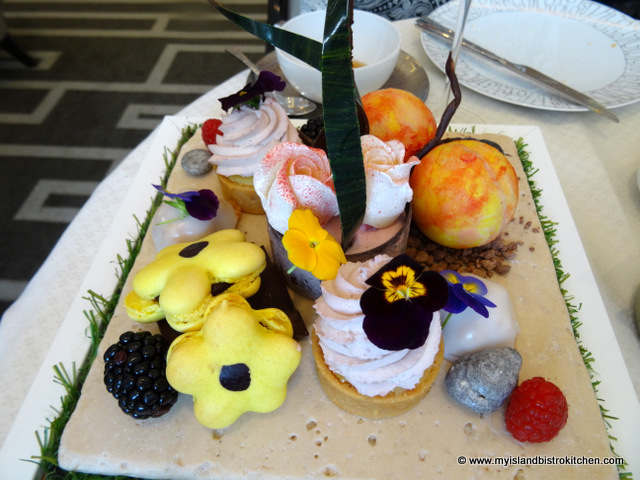 Again, Luigi expertly explained each item on the tray, offering suggestions for the order in which to partake. He also recommended that the palette be cleansed and refreshed via the fresh summer berries or chocolate “pebbles” in between consuming each sweet so that the true flavors of each could be fully appreciated. 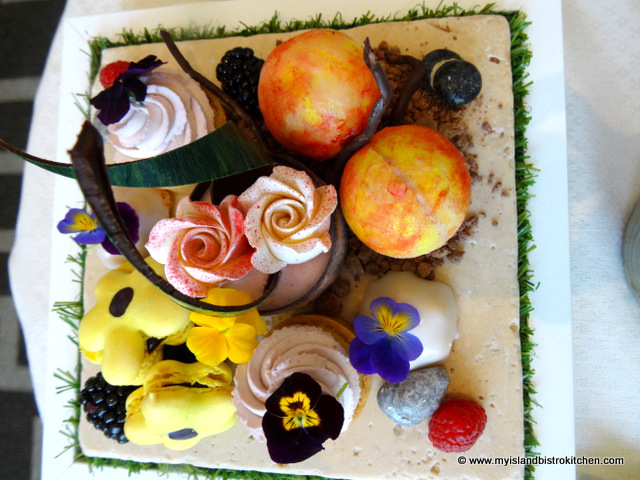 Everything you see on the tray in the photo above was edible, including the very realistic looking pebbles and the fresh pansies. A quick spritz of a floral spray with top notes leaning into Jasmine scents set the stage reminiscent of an English country garden in summer. 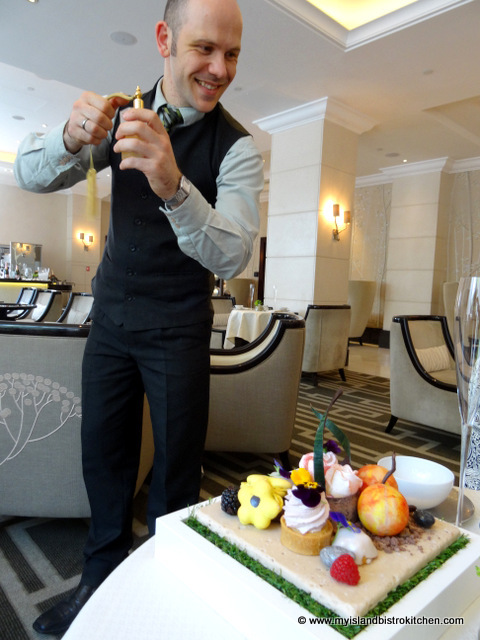 We first sampled the petite Jasmine Tea Cake which was delicately flavored and ever-so-tasty.

We next savoured the luscious Violet Cream and Grapefruit Tart.

Then, we moved on to the Bergamot and blackcurrant flower macarons which were ever so light, delicately chewy, and yet airy. For those who are connoisseurs of French macarons, they know that it is a skill to achieve the perfect macaron and these certainly fell within that category. 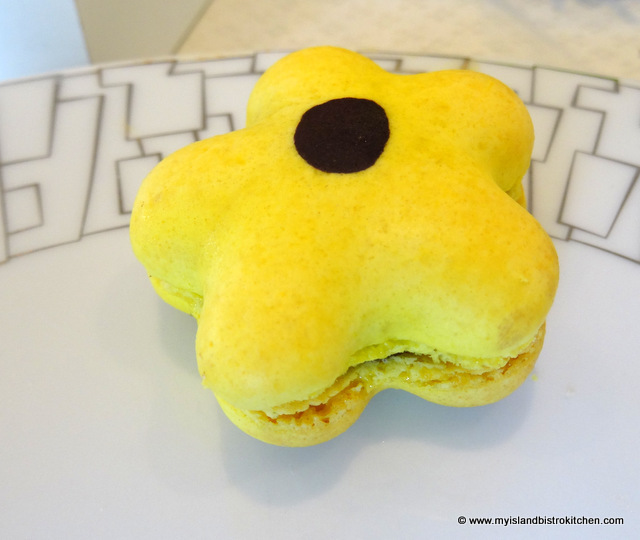 This was followed by the Peach Melba mousse encased in chocolate to create a realistic looking peach that could have just been picked from a tree. 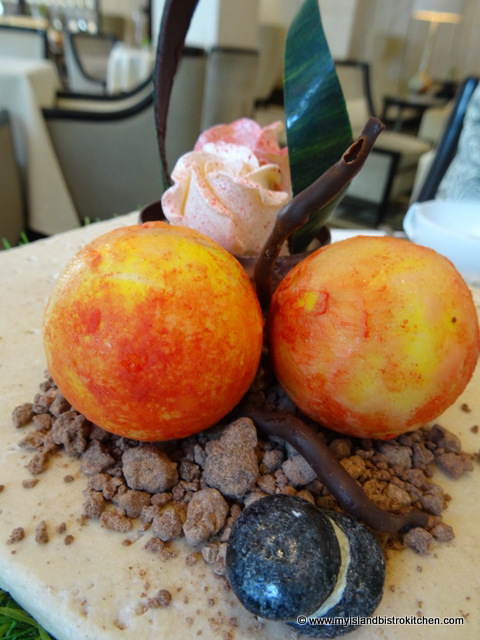 The grand finale, the “Flower Pot”, was designed to be shared between two people. This consisted of rose water and pink peppercorn jelly with wild strawberry mousse served in a chocolate Terracotta pot and decorated with chocolate roses. 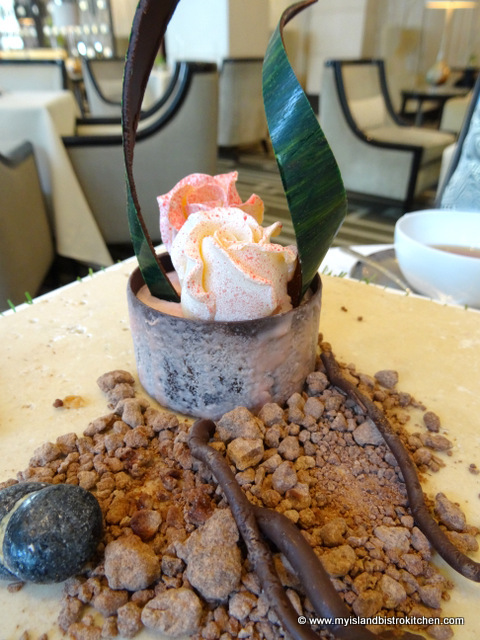 The tea recommended for this course was the #1 Park Lane Signature Tea which proved itself a wonderful accompaniment to the desserts.

A glass of Moët & Chandon berry floral Rosé was served with the dessert course. 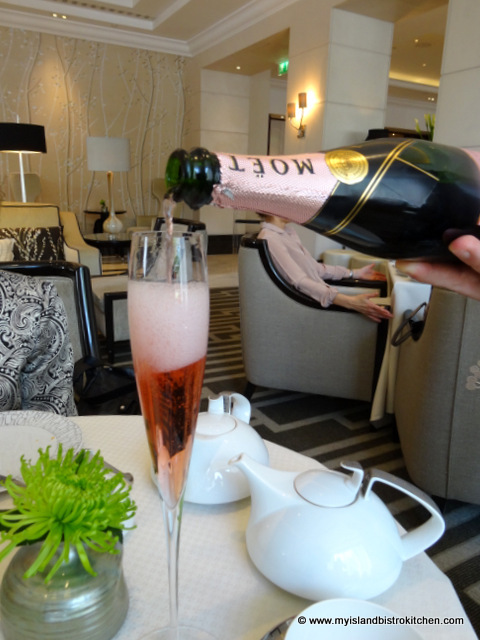 Overall, I was highly impressed with the calibre of food and level of service and hospitality at the Intercontinental London Park Lane’s Wellington Lounge. I found the Scents of Summer Afternoon Tea included traditional tea items like the scones but also stepped it up a notch with the creativity of the choice of bread, and ingredients in, the sandwich pinwheels/scrolls and the selection of sweets that comprised the dessert course. We quite enjoyed having the food served in courses as opposed to simply having a standard three-tier server delivered to the table with sandwiches, scones, and sweets all on it. It lent an element of surprise and anticipation to the experience which was relaxing and unhurried. I was also impressed with the expert advice on tea pairing with each course which I felt added to the quality experience. 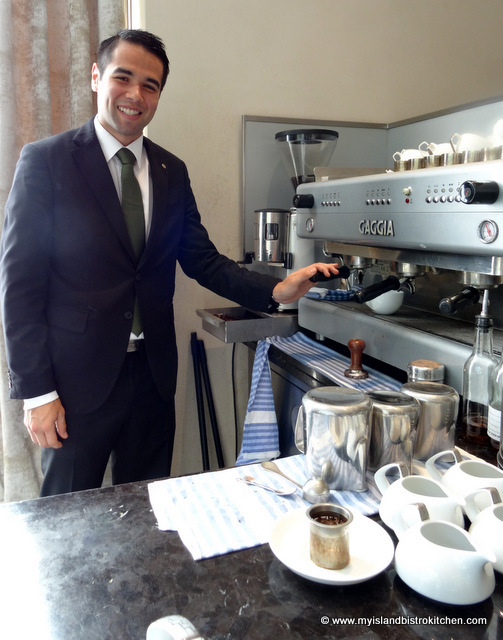 If you are in London this summer and go to only one afternoon tea, I recommend the Scents of Summer at the Intercontinental London Park Lane Hotel.

If you are in London this summer and go to only one afternoon tea, I recommend the Scents of Summer at the Intercontinental London Park Lane Hotel. Great thought and care has been taken with the creation of this afternoon tea menu. We spent a most relaxing and enjoyable afternoon over tea at the Park Lane and it was one of the highlights of our 2015 visit to London. Now, if I could just justify another trip to London, I would go in December to experience their holiday tea which Chef Wells is already designing. Based on his Scents of Summer creation, I can only imagine how extraordinary the Christmas afternoon tea will be.

The Scents of Summer afternoon tea experience costs ₤45 + gratuity (generally about 15%) which, at the time of writing totals approximately $100. (CDN) per person.


My thanks to the Park Lane for the opportunity to experience their Scents of Summer Afternoon Tea and for the fine hospitality. My afternoon tea at the Intercontinental London Park Lane Hotel was complimentary for the purpose of conducting a review of the new Scents of Summer offering. However, this in no way influenced my opinions of the afternoon tea experience.  All opinions expressed in this review are purely my own.

To read my reviews of afternoon tea at the Georgian Room at Harrods and at The Orangery at Kensington Palace, click here.