If there is one consolation to summer’s end on PEI, it’s the anticipation that September brings the annual PEI Fall Flavours Festival. The Island’s emerging culinary scene with all its fine foods is showcased each September in an array of culinary events that comprise the festival. What started out in 2008 as a small 10-day festival consisting of a few culinary events aiming to extend the Island’s short tourism season into September, the festival has grown into a full month-long feast extravaganza.

September is the perfect month for a PEI food festival as the produce is at its prime, potato harvesting is getting underway, and the fall lobster season is open in certain zones around the Island. We are lucky here in PEI – we have a wonderful array of fresh local foods from the land and sea and the festival is a great celebration of our love of local foods.  Culinary events are spread out in communities across the Island and each tends to highlight foods that come from a particular area and/or that are associated with a certain region’s culture.

The “Festin acadien avec homard” (or lobster feast) at Abram-Village, west of Summerside, is always the first PEI Fall Flavours Festival culinary event of the season and it signals a tasty month ahead. Tickets for this event sell out weeks in advance and it is one Fall Flavours event that is certain to draw a lot of Islanders to the Evangeline area. In some respects, it’s almost like a homecoming weekend as family members travel home to the Island’s Evangeline region for the annual Evangeline Agricultural Exhibition & Acadian Festival.  There is no better way to learn, first hand, about the culture of a region than to partake of the regional foods and entertainment.  “Le Festin acadien avec homard scores high points on both counts.

This year marked the second year that I attended this event – that’s testament to how much I enjoyed it the first time!  While the menu remained almost identical to the previous year, what changed was the entertainment and the headline celebrity chef who, in 2017, was Chef Danny Smiles, Chef de cuisine at Restaurant Le Bremner in Old Montreal. This was Chef Smiles’ debut at the PEI Fall Flavours Festival.

The lively musical entertainment was provided by Vishten, a trio of talented musicians (two from PEI and one from the Magdalen Islands).  Rooted in traditional music from the two east coast islands, their indie-folk style fuses Acadian and Celtic genres and motivates foot stomping and hand clapping.  The performers are multi instrumentalists and they easily transition between various musical instruments that include violin, guitar, accordian, and keyboard.  The trio tours and performs internationally and has five albums and more than 1000 performances to their credit.

The “Festin acadien avec homard” event has been running for several years and organizers have it well organized and they are very efficient in carrying it out.  MC Georges Arsenault is a very capable and effective Master of Ceremonies.

Georges had lots of fun in store for the evening that included a demonstration of different ways that lobster can be cracked and eaten.

Georges selected a young person from the audience who had never cracked open a lobster before, celebrity chef Danny Smiles, and Odette Gallant from the Evangeline area who has been cracking open lobster with her teeth all of her life – yes, her teeth!  I wondered how many sets of teeth she might have gone through because those lobster shells are hard!

Georges also had audience participation on stage as a member of Vishten taught Chef Danny and others how to step dance.

All of this entertainment took place in between courses of the meal.  Oh yes, the menu……

As this event took place in the region of the province that has a high concentration of the Island’s Acadian population, it is obvious that the evening’s menu would focus on Acadian fare along with lobster and potato salad since the region is known for its farming and fishing industries.

Like many PEI gatherings, the evening started off with steamed PEI mussels.  Patrons were then invited to sample three new soda flavors produced by Upstreet Craft Brewing in Charlottetown.

Known for their craft beer, making soda is a new venture for Upstreet.  The event proved to be a great opportunity for the brewery to showcase their new products – Strawberry Rhubarb Basil, Apple Ginger Elderflower, and Malt Spice Cola.

Dinner was served, family style, at long communal tables.  Servers, garbed in traditional Acadian dress, brought bowls or platters of food to both ends of the table and the food was then passed from one diner to the next with each person serving him or herself.

The first course was Chicken Fricot, a traditional Acadian broth stew made primarily of chicken, onion, and potato and seasoned with summer savory.

Every time I have a bowl of this stew, I’m always amazed at how tasty it is given that so few ingredients are in it.  I maintain it’s the summer savory herb that makes this dish.  Summer savory is used a lot on PEI and most Island cooks add it to their poultry dressing/stuffing.

This was followed by the second course comprised of Râpure and Acadian Meat Pie.

Some may know the grated potato dish, râpure as “rappie pie”, a name that stems from the French verb “râper” which means “to grate”. The grated potatoes are squeezed through cheesecloth to remove the liquid which is then replaced by adding broth (usually chicken) and baking it, casserole style, with onion, and cooked meat such as chicken or pork. The end result is a hearty and tasty dish.

The second course also included Acadian meat pie or, pâté, as it is sometimes called.

This is a very common dish in Acadian communities and is an integral part of Christmas Eve celebrations in many Acadian homes on PEI, though it is now commonly served at other times of the year as well.  Molasses is often drizzled on top of the meat pie to add a touch of sweetness to this savory dish.

Our server, Velma Durant, was very pleasant and most accommodating to me with my camera clicking away throughout the evening!

Then, of course, it was time for the pièce d’résistance – PEI lobster in the shell served with true, authentic homemade PEI potato salad – these folks know how to make a perfect potato salad!

It just would not be a PEI lobster feed without the potato salad!

French biscuits were on the table, too, with that good ADL butter!

And, for those who still had room, homemade apple pie polished off the evening’s menu.

One thing is for sure, no one would have gone away hungry after this mammoth meal!

For stories on other PEI Fall Flavours culinary events I’ve attended, click on the links below: 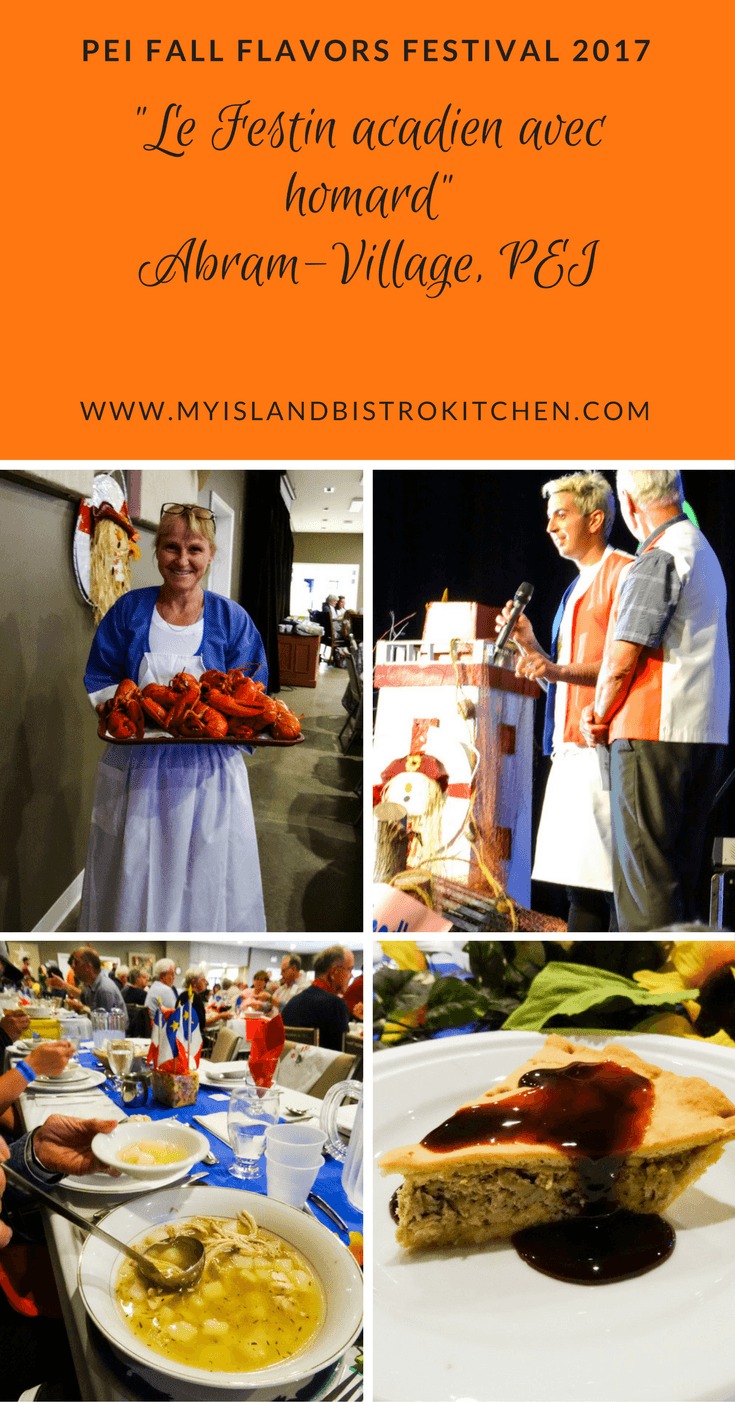